The LG BL40 has a proprietary OS – with S class UI running. Due to this, it is easy to dismiss the BL40 as just another device. But that is exactly where most of us get it wrong. The BL40 is by no means an ‘under featured’ phone. It has a plethora of unique additions which cannot be found on many other devices. Let’s look into them in some detail –

LG has some very nice widgets shipped along with the device. They are very useful and time savers. But that’s where it ends. One cannot add more widgets or even download third party widgets off the internet. This means you are stuck with what you have. A pity as the unique screen size could have accommodated so many widgets.

The S class UI enables the BL40 to have a Cube like interface apart from the regular view. This style allows you to cycle through 4 different homescreens on the BL40, the Widgets based, the Contacts shortcut, the browser shortcut and the applications shortcut.

The contacts shortcut arranges all the numbers you choose as shortcuts in a pseudo Rolodex format. By clicking a contact you can choose to call, message, video call and edit the information.  Interesting execution I say.

The browser shortcut homescreen showcases the bookmarks you have saved and assigned to be reachable at the touch of your finger.

The last homescreen allows you to line up features and/or apps you would like to be able to access quickly.

Overall, the Cube UI makes things interesting it’s purely a gimmicky add on as one can navigate to these homescreens without having to invoke the Cube UI as such. It’s nice but if it allowed one to do something more, it would have rocked. 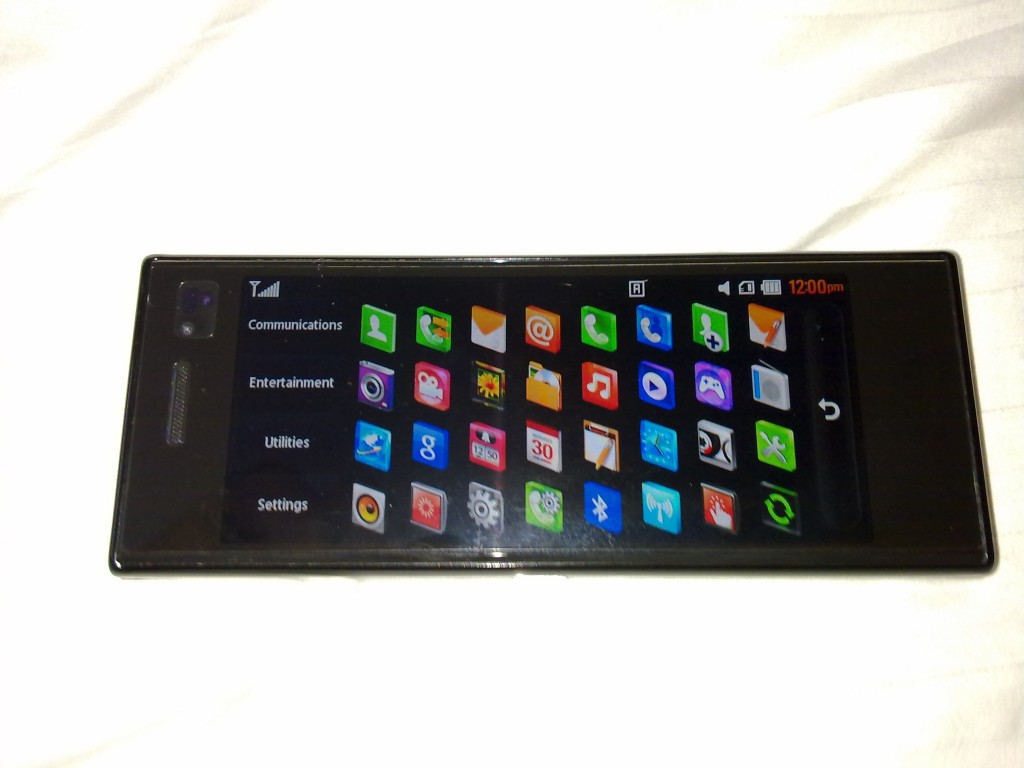 The LG BL40 has certainly got one of the most colorful and unique set of icons. I found them to be cheerful. Certainly is a pleasant change to be looking at these icons than the flat icons on the other devices. Personally I liked them, but hey if you think it’s too citrusy and fruity – you can change the theme which also changes the icons.

The BL40 has some very interesting features up its sleeve. The dual screen UI is quite unique to it. Pity it isn’t there across the entire phone. We would have loved to be able to multi task in this manner. The Dual screen UI allows you to read your messages and at the same time also see the list of messages. Something of the sort you find with PC email clients like Thunderbird and Outlook, a thoughtful touch that can definitely see more development happening its way.

The BL40 allows you to customize the profiles to a large extent and though it’s not as expansive as the BlackBerry’s, it’s safe to safe that this comes second. From standard things like ringtones, to how the phone should vibrate when a call comes through and how should it vibrate if an SMS comes through… clearly it makes many leading phones look like oldies. LG has certainly been doing a lot of thinking and it actually shows with this product.

It has all the regular features that a smart phone claims to have and more. The image editor on this phone is the most advanced and most feature rich on a phone to date. It has more options than even Picasa! No phone – I repeat no phone can boast of such an expansive set of options when it comes to editing as this phone can. It makes the current set of Nokias, Samsungs and others look like device from two decades ago.  Without a doubt this makes the BL40 worth a buy.

The fact that the LG BL40 can play DivX videos is a big plus point if you ask me. The movies sure do look impressive when played on this phone. If you have a liking for movies, this is the phone to buy. The sheer ability to play DivX is a big score for the BL40.

The ability to record till there is space left on the phone is another little touch that will make users smile. If you actually look at it, the LG BL40 doesn’t offer a lot many new things, but what it does offer are tweaks and little additions that one expects a phone to have by default. LG’s R&D team has really been listening to their user base. That shows by the thoughtful additions and tweaks they have given each feature on the OS. Every little feature has something extra to offer. This makes the BL40 a very well thought out device.

Games on the BL40 were also great. The default games provided under Fun Stuff were some of the best games I have played on a touchscreen device and enjoyed. I will most certainly miss the games that come with the BL40.  Dual Match, Racing Time 2 and Real Motion Fishing will be sorely missed. The games were addictive and were of the kind that ensured you had a good time and never got bored. Gesture based gaming worked well on this phone. Thumbs up! to an impressive games package in the phone.

The BL40 as you know does not have a physical number pad or a QWERTY keypad, what it does have is a long screen. This means that the capacitve screen doubles up as the keypad (vertical orientation) and the QWERTY keypad (horizontal orientation) when needed. The QWERTY layout is nice but a tad too thin, primarily because the screen is long. We wish there were bigger keys, as it can cause one to press the wrong keys. We did find it a bit irritating that we could not use the QWERTY form of input when searching for a contact and in some other applications.

On the whole a pleasurable experience, the keypad is good but can use a few tweaks to make it even better.

On the whole The BL40 brings to the table an OS that is pretty much fully loaded. It has everything you would want from the device. I don’t like touchscreen phones so much but the BL40 did change that perception a bit. It is certainly a good phone from LG and quite certainly a one of the better touchscreen devices too.

I’ll rate it at 8/10. A good OS with a lot of extra features and additions makes this the most loaded phone from the word go. Rarely does a phone come from the manufacturer which is so full loaded that it does not require a third party app. Brilliant OS from LG.

There is one little thing that we wish the BL40 had, and that is a ‘hot-swappable memory card slot, instead of the current form. Remember this is a phone too, LG.