HTC has teased a new smartphone that will be announced on September 6th. It is expected that the company will make the HTC Aero aka One A9 official. 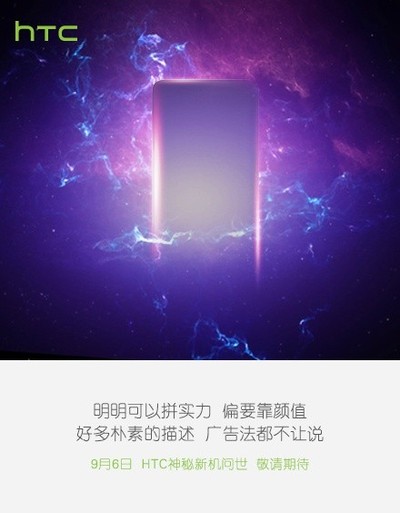 HTC has uploaded the above teaser image on its official Weibo account. The teaser shows the phone along with Chinese text that reads “Meng Yao” which translates to “superior handsome.” Previous leaks and rumors have stated that the HTC Aero/One A9 will sport a 5.2-inch Quad HD display and will be powered by a MediaTek’s high end deca-coreHelio X20 SoC.

It will have 4GB RAM, 3500mAh battery and may come with 2.5D glass and a full metal unibody design. The phone is said to have a camera with a maximum aperture of f1.9 that will allow users to good quality photographs in low-light conditions. It will even support RAW image capture.