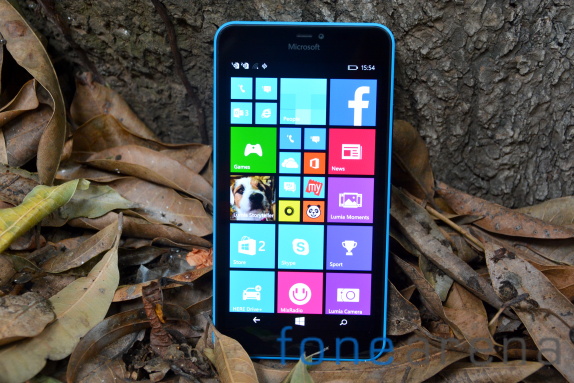 Microsoft recently announced its Lumia 640 series, consisting of two devices – Lumia 640 Dual SIM and Lumia 640 XL Dual SIM. We already reviewed the former, but the 640 XL is the better-equipped smartphone.

Microsoft with its 640 series is trying to offer a smartphone to everyone out there and thus we have these diversities. We have spent some quality time with Lumia 640 XL to understand if it offers any value to its price tag and here’s our detailed review.

Microsoft Lumia 640 XL comes in a standard retail box with the phone branding all over the package. The regulatory details and the key hardware specifications have been mentioned on the rear of the box.

On opening the package, you first see the device itself and on further inspection you find the A/C adapter, headset and some paperwork.

Unfortunately, the company is not including a microUSB cable and you will have to buy one separately. It would have been great if Microsoft could have included a USB cable that could even double up as a power cord.

Microsoft is continuing the trend of Nokia Lumia shell design with its latest mid-ranger. This also means that Lumia 640 XL will look just like any other Lumia device. Microsoft could have easily innovated and offered something new, but instead the company has gone with a tried and tested formula.

The Lumia 640 XL comes with a plastic removable rear cover and it fits perfectly without any squeaks. The back shells will be available in a wide range of vibrant covers – something we are already familiar with Lumia devices. Some of these colored panels are offered in matte finish, but we personally like the glossy finished ones, as they are more attractive. 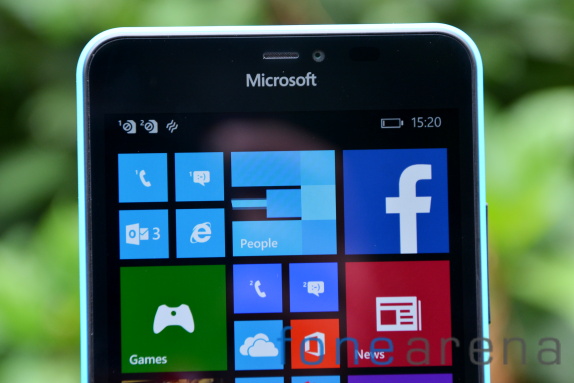 Microsoft Lumia 640 XL measures 157.9 x 81.5 x 9mm about measures about 171 grams. Even though the weight seems to be on the heavier end, the device doesn’t feel heavy in hands and that’s mainly due to its huge form factor.

The matte version of the smartphone offers good grip and fits well in the hands, while the glossy back panels are quite slippery and is fingerprint prone.

On the front, the 640 XL has a huge 5.7-inch IPS with ClearBlack display technology. So, the front is pitch black when the display is turned off. Apart from the screen, you find the earpiece and the 5-megapixel front facing camera along with a bunch of sensors. The primary microphone pinhole is just below the screen. 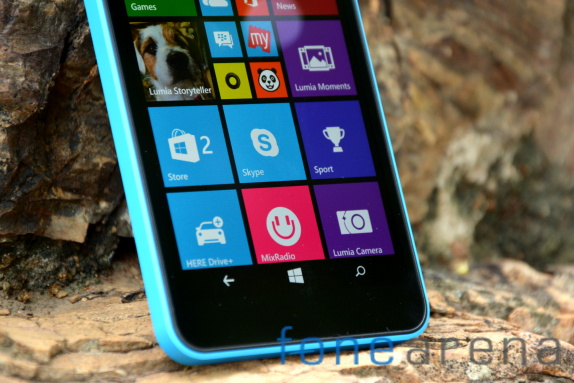 The left side of the Lumia 640 XL is completely bare, while the volume rockers and the power button is located on the right. 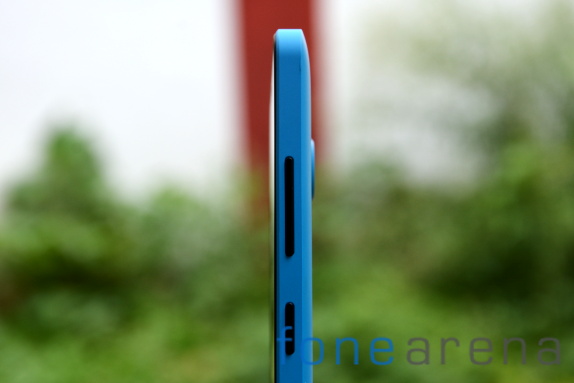 Microsoft Lumia 640 XL has the 3.5mm audio jack on the top and apart from it there’s nothing else there. 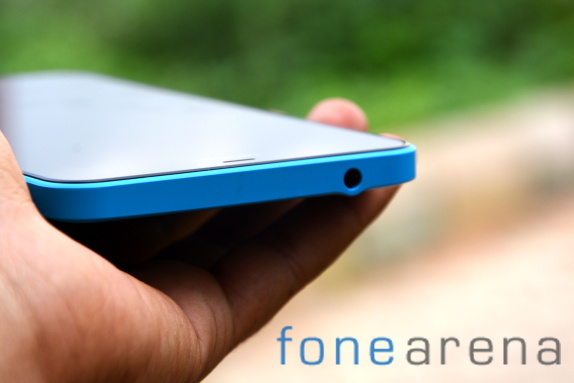 The microUSB port is cenetered at the bottom on the Lumia 640 XL. 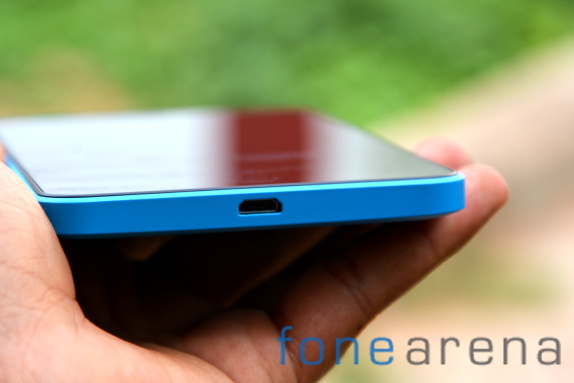 Moving to the rear, the 13 megapixel ZEISS lens can be found. The camera is accompanied by a LED flash and laudspeaker grille. 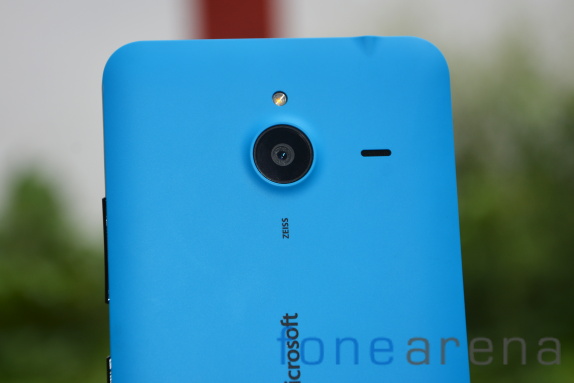 As mentioned earlier, the 640 XL has a revomable back panel and underneath it lies the SIM card slots and microSD card slot. 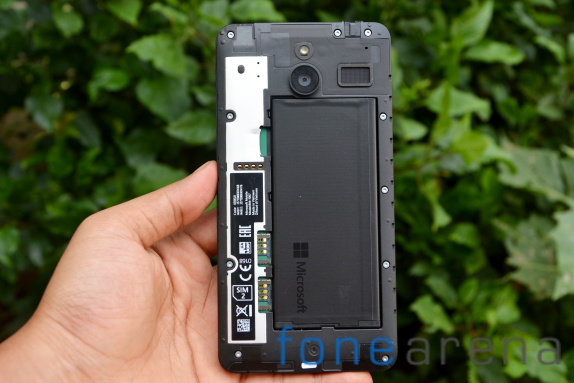 Microsoft Lumia 640 XL sports a 5.7-inch ClearBlack IPS display with a resolution of 720 x 1280 pixels and accounts to a pixel density of 259ppi. The sharpness and the image quality is quite satisfactoy.

The viewing angles are not great, but pretty decent. The color rendering is quite accurate and the contrast is good. However, the blacks on the 640 XL are not so great and we found out the pixel density to be only average. 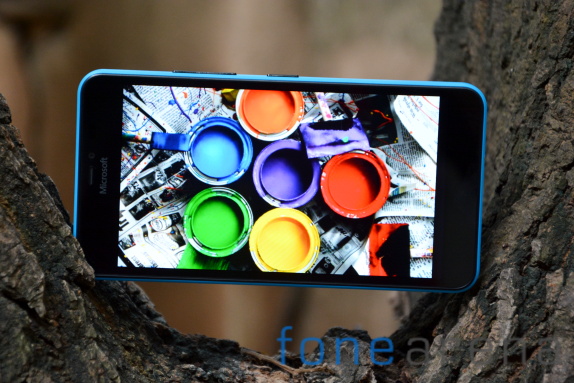 The brightness at 100% is good and the sunlight legibility is excellent, which means you don’t have to find a shetter to view the screen even in the brightest day.

Microsoft is also offering some software assistance to improve the performance of the display on the Lumia 640 XL. The Color profile application allows you to tune the saturation and color balance to match your taste.

Microsoft’s Lumia 640 XL comes with the latest Windows Phone 8.1 operating system out of the box. Furthermore, the device also has the latest Lumia Denim pre-installed. The Redmond giant announced the 640 series along with the Windows 10 OS and the company has promised firmware upgrade for the Lumia 640 XL. 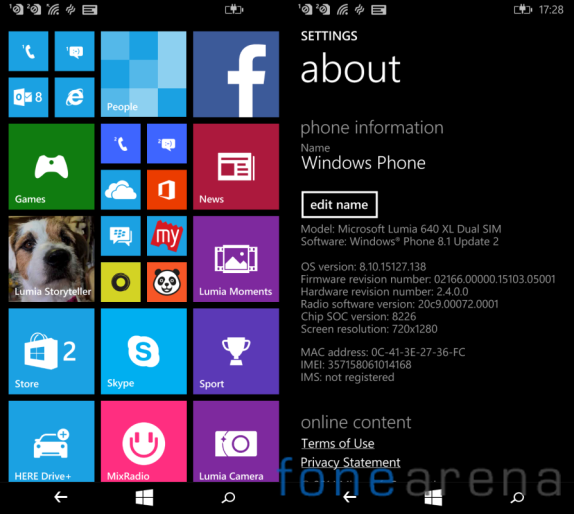 The Windows Phone 8.1 on Lumia 640 XL has folder support and also has the newly introduced personal assistant, Cortana on-board. The settings menu is now well organized and the overall experience has gotten a lot better.

With the latest software, the Glance Screen feature on the 640 XL offers more features. Apart from the clock, you can now view notification on the lockscreen for pre-configured applications. 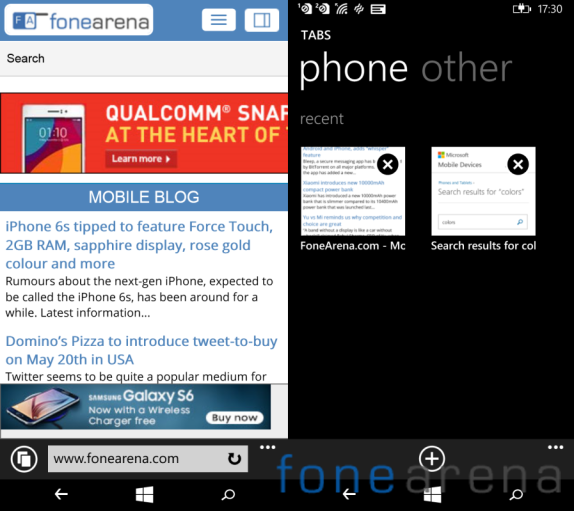 Microsoft’s OneNote also comes preinstalled and OneDrive is integrated to the OS. There’s Office on-board. You view and edit documents, excel and powerpoint for free. 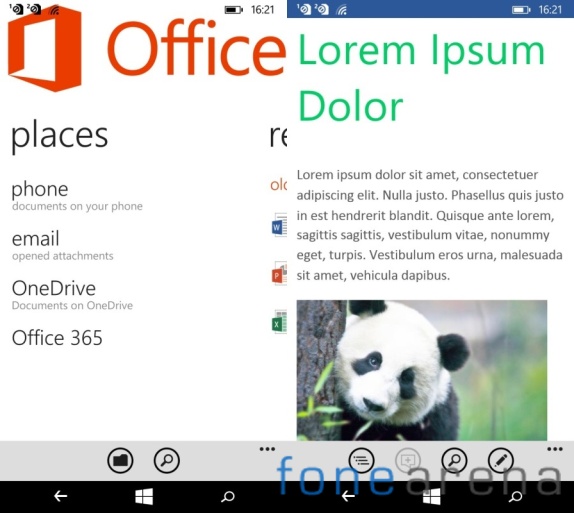 The Lumia exclusive applications like Storyteller and Creative studio are available on Lumia 640 XL. Just in case you aren’t aware, the Lumia Storyteller application creates stories from your photos based on where and when it was taken. 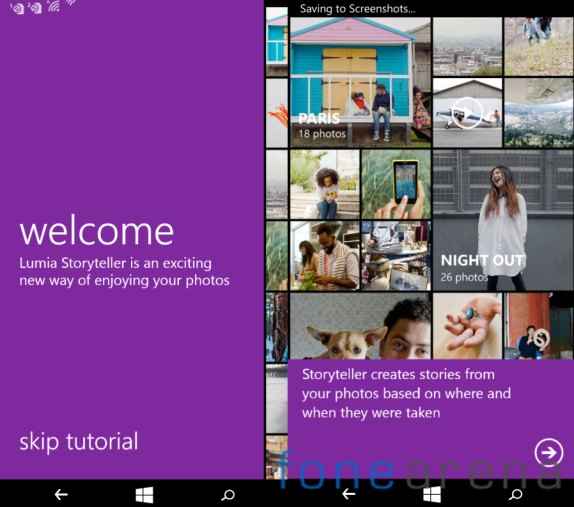 Microsoft’s answer to Google Now and Apple’s Siri is Cortana. The virtual assistant has the ability to recognize voice commands and responds to it in human language. Cortana can also track what’s trending, keep a tab of breaking news, make cooking suggestions, find places, plan trip among other things. We noted during our testing that it has a very good sense of humour. 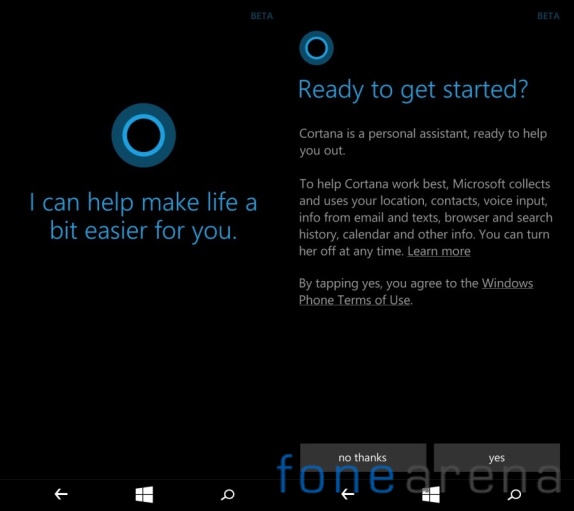 The Indian variant of the Lumia 640 XL comes with some localized applications like FoodPanda and MobiKiwi and BookMyShow. 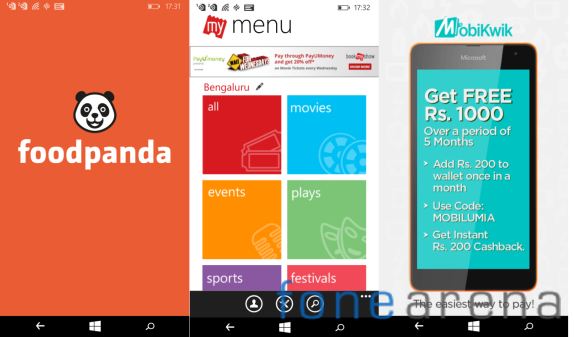 Just like most the Lumia devices, the 640 XL has 1GB of RAM. Even though the Windows Phone operating system is well optimized to run on lower end hardware, it’s quite difficult to understand why Microsoft has chosen a dated Snapdragon 400 for a 2015 smartphone.

The Snapdragon 400 is not a power house in any manner, so we do not expect it to top any of our benchmarking charts. We ran AnTuTu test just to be sure and here’s the result – 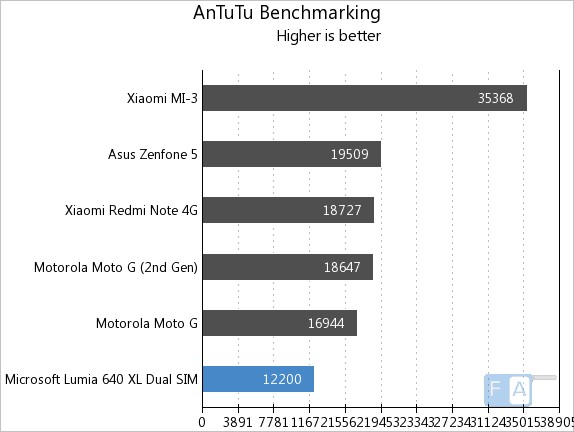 In our usage, the 640 XL did offer lag-free performance for day to day usage such as calling and messaging. However, the moment we tried to push it by launching heavy applications or multiple applications, we could notice delay and the smartphone got slow.

The performance is still pleasing if you are a non-power user. But, if you are a basic user of a phone, does buying a smartphone make sense? And, that too Lumia 640 XL at its price tag? Well, we’re not too sure.

Microsoft Lumia 640 XL is equipped with a 13 megapixel camera and an LED flash. Unlike previous Lumia devices, the 640 XL lacks a dedicated camera button. 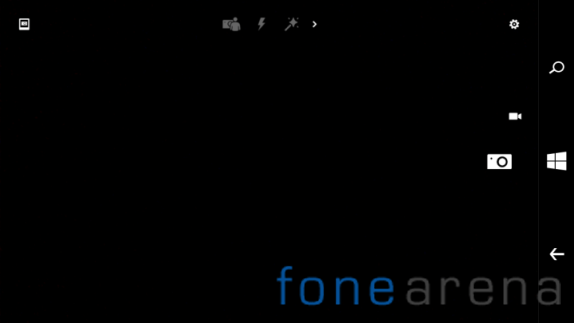 The user interface of the Lumia camera is quite familiar and navigation between menus is very easy. The settings option such as focus, white balance, ISO, shutter speed and exposure are available. You can capture images with either 13 megapixel 4:3 or 10 megapixel 16:9 resolutions.

We took the device for a spin and capture some images to show it to you all. Take a look – 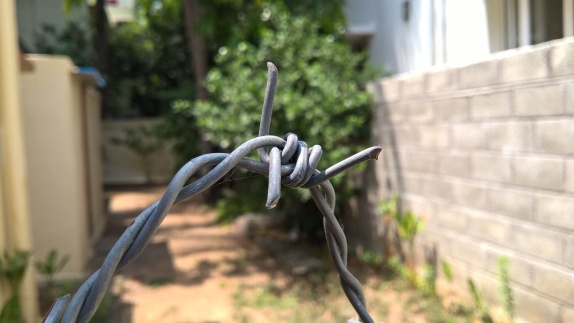 The images captured with Lumia 640 XL camera had good amount of detail and the contrast is good. The color rending is accurate, but the noise levels are quite high. The white balance is automatically turned off sometimes, but overall the shooter performs well for a mid-range smartphone.

The rear camera on the Lumia 640 XL also doubles up as a camcorder and the user interface is similar to that of the still camera. The snapper has the ability to record videos at 1080 pixels @ 30 frames per second. It also has a solid bitrate of 17Mbps, but the videos recorded are in single channel AAC mode with 48KHz.

The video recording quality is quite satisfactory, but there’s lot of scope for improvement. The level of detail can get better and so is the overall dynamic range.

The dual-SIM device has dual standby and offers a wide range of connectivity options. It has dual-band Wi-Fi a/b/g/n with DLNA, Wi-Fi Hotspot and Bluetooth 4.0.

The juice for the Lumia 640 XL Dual SIM comes from a 3,000mAh battery and during review process it did get our battery test treatment. 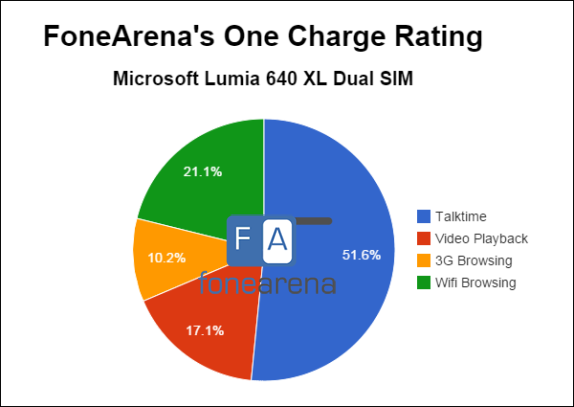 According to the company, the device offers about 23 hours of 3G talk time. However, in our test the device managed to last more than that with charts reading 27 hours and 20 mins.

The detailed breakdown of the battery consumption will be posted on our blog in the next couple of days. So, keep a close eye on our blog wall. Meanwhile, if you aren’t aware of our test, then feel free to check our battery test introduction story to know more about our procedure.

Microsoft introduced seven new models in its Lumia 640 series. The best variant among them is the Lumia 640 XL Dual SIM and if you happen to have big hands, then you’ll like handling the phablet. The device is currently available in the market for about INR 15,200.

If you are a hard core Lumia fan or using Lumia device for a while, then you’ll like the 640 XL. However, if you are new to Windows Phone ecosystem, then 640 XL leaves much to be desired.

The build quality of the Lumia 640 XL is great and we suggest you to pick a matte finish model over the glossy finish as they are slippery. The display is bright and the sunlight legibility is good. Lumia 640 XL has a very capable camera and it offers decent quality images. The video recording is also satisfactory. 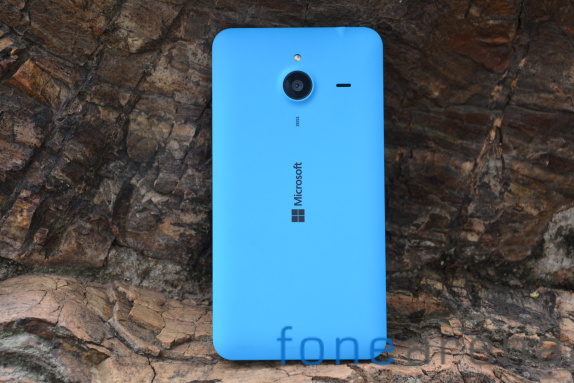 The Windows Phone 8.1 with Denim is snappy and is undoubtedly the best version of WP OS till date. Microsoft has also promised Windows 10 update for the Lumia 640 XL.

The biggest let down is the processor and if you happen to be a power user, the Lumia 640 XL doesn’t sound like a right choice. We don’t understand why Microsoft picked the Snapdragon 400.

Considering the price tag of the device and what it has got to offer, we don’t think Lumia 640 XL offers good value for money. Also, it fails to compete with most of the Android competition out there.

If you are in the market looking for a mid-range smartphone, then you might want to look at Xiaomi Mi4i, ASUS ZenFone 5 and Moto G 2nd generation ahead of Microsoft Lumia 640 XL.