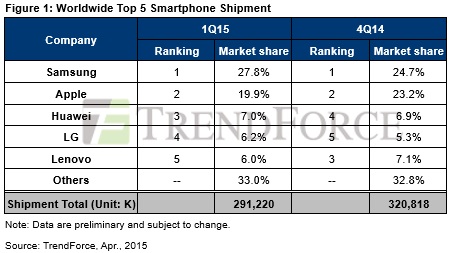 As per TrendForce’s forecast, China’s smartphone market will see visible recovery in the latter half of the second quarter at the earliest, and the shipments of Chinese smartphone brands will reach 122M units in total, or a 14.8% increase over their first quarter shipments. TrendForce’s report also lists the top five smartphone makers in China in the first quarter: Huawei, Lenovo, Xiaomi, TCL, and Coolpad. Huawei stole the No. 1 spot in China from Lenovo.