Motorola unveiled the Verizon Droid Turbo two days back in the US. Now, the company is sending out invitation for launch event of the Droid Turbo in Brazil on November 5. 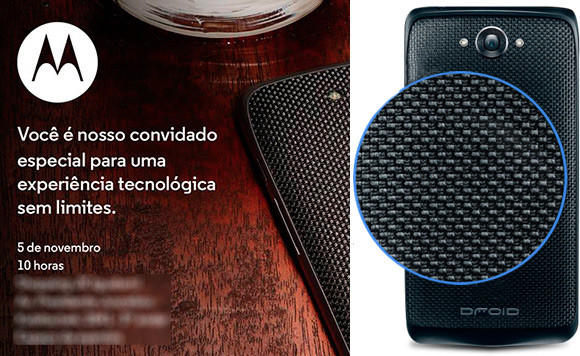 However, the global variant of the phone will likely be touted as Moto Maxx. Although, the invitation does not mention the name of the device it shows back of a device that resembles that of the DROID Turbo’s Ballistic Nylon back. The Droid Turbo sports a 5.2 (1440×2560 pixels) AMOLED display with Corning Gorilla Glass 3 protection, powered by a 2.7GHz quad-core Qualcomm Snapdragon 805 processor  and runs on Android 4.4 (KitKat). It has 3GB RAM, 32GB/64GB internal storage.

The phone has a 21-megapixel rear camera with dual LED flash, 4K video recording and a 2-megapixel front-facing camera. One of the key features of the phone is the 3,900mAh battery, which can soak up 8 hours of battery life in just 15 minutes thanks to the Turbo Charger. It is not known if the phone will be launched in other countries as well.