Microsoft has announced the launch of Wireless Display Adapter that is a Miracast-based wireless streaming device for HDMI monitors and televisions. The device was rumored to be in making and had been leaked last month. 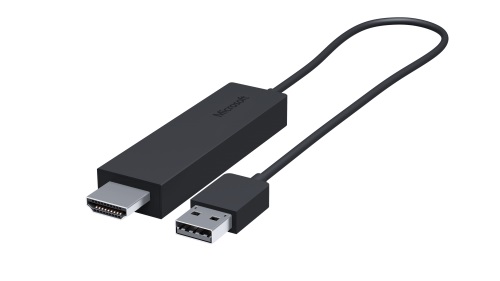 The Miracast streaming stick supports devices running on Windows and Windows Phone. Users can also stream content from a phone or tablet running Android 4.2.1 or later. It connects to an HDTV, monitor or projector and allows users to share audio and visual content from Miracast-enabled devices, within a 23-foot range.

“All you need to do is plug the USB end and HDMI end of the Microsoft Wireless Display Adapter into an HDTV, monitor or projector. Then select the right input on your TV, pair it with your laptop, tablet, or smartphone and you’ll be ready to go. Then just wirelessly project your screen from your Miracast-enabled device.”

The small dongle can either mirror your screen to a TV, or turn the TV into an additional display. Priced at  $59.95, the Wireless Display Adapter is up for pre-order on the Microsoft Store website in the US and Canada. It will be due out sometime in October. Google has a similar popular device Chromecast that mirrors your Android device on to a TV screen.