The hardware specifications of the two edition of Samsung Galaxy Mega phablet was leaked just a couple of days ago. Today, we have received images of what looks like the AnTuTu benchmarking results of the upcoming Mega 2 smartphone. 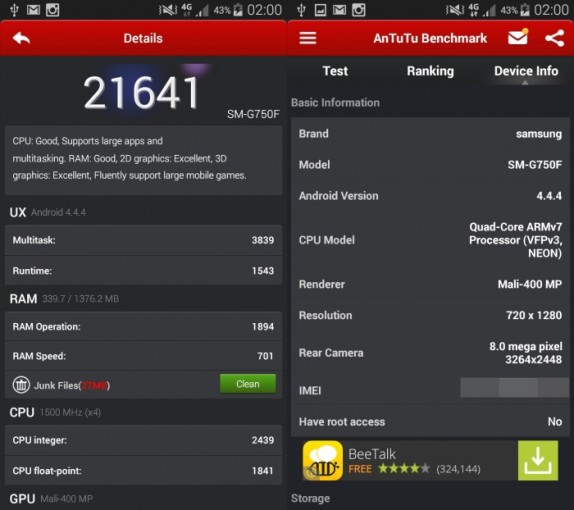 The unit involved in the benchmarking carries the model number SM-G750F, which reveals that the device is one of the variants of the Samsung Galaxy Mega 2. Furthermore, the results confirm that the smartphone will sport a 6-inch display with a resolution of 720 x 1280 pixels.

If the leaked screenshots are to be believed, the Galaxy Mega successor will be powered by an Exynos processor with quad-core 1.5GHz CPU and Mali 400 GPU. The AnTuTu score indicates that the chipset might not be a powerhouse, but its possible that we are looking at the results from an early build.

The Mega 2 will come out with 1.5GB of RAM on board and there will be 16GB of internal memory available to fit in all your content. The Galaxy Mega 2 will house an 8 megapixel sensor on the back and the device is rumored to feature a 4.7 megapixel front-facing shooter. One can expect the upcoming Samsung phablet to support a wide range of connectivity options, but at this point in time, we can only confirm that the device will brace 4G LTE.

Samsung Galaxy Mega 2 will run on Android 4.4.4 KitKat with latest TouchWiz UI on top. The juice for the phablet will be provided by a relatively small 2,800mAh battery. Our tipster also says that Galaxy Mega 2 will carry a price tag of $450.

Considering the fact that the AnTuTu benchmarking can be easily faked, we suggest you to take it all with a pinch of salt.

Thanks to our anonymous tipster!