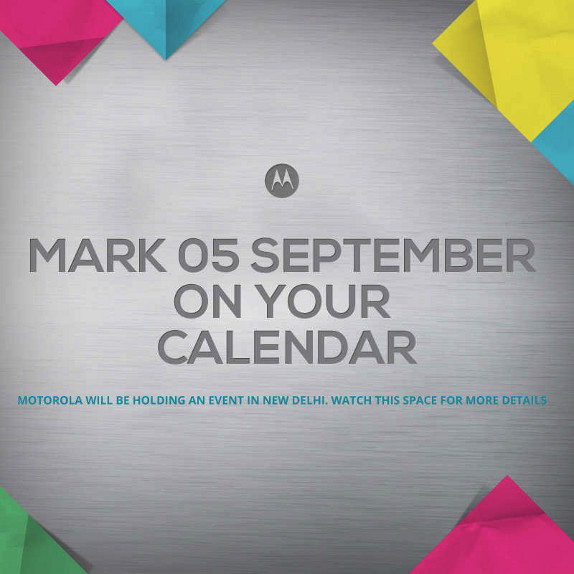 Few days after announcing the September 4th event in the U.S, Motorola has sent press invites for a launch event on September 5th in India. The invite just says Mark 05 September on your calendar and it will be holding an event in New Delhi.

It has Green, Pink, Yellow and Blue colors on the sides, similar to the U.S. invite that hinted at new X series smartphone, G series smartphone, a Bluetooth headset and the Moto 360 smartwatch. Since the invite asks us to watch the space for more details, Motorola might reveal more details about the India launch soon.

According to the Motorola Moto 360 specifications were leaked few days back, it would have a 1.5-inch LCD touch screen with 320 x 290 resolution along with Gorilla Glass 3 protection, heart rate monitor, pedometer and wireless charging. It is rumored to carry a price tag of US$ 249.99.

Motorola scheduled several events worldwide for the Moto E launch back in May. Let us wait for Motorola to reveal more details about the event. We will be there at the event to bring you more details and first impressions of the devices that are launched on September 5th.