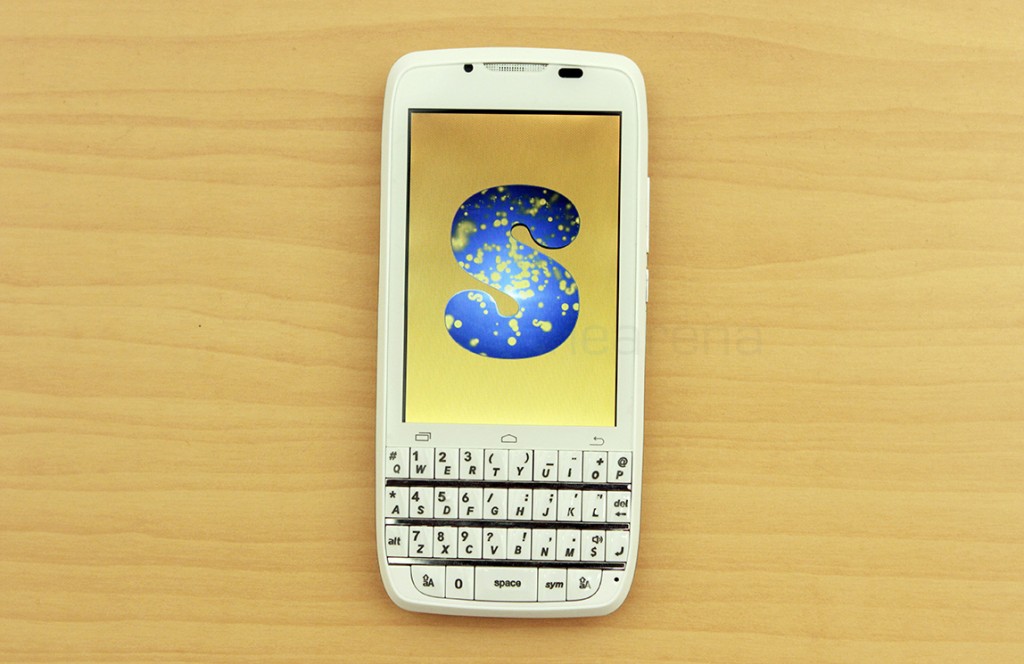 In a world of touchscreen phones, choices in form factors are few, but Spice, one of the many Indian smartphone manufacturers, is offering one, with a keyboard. Spice’s Stellar 360, a budget Android touchscreen smartphone with a full sized qwerty keyboard, wants to appeal to a crowd that still likes its messages typed, on a real keyboard. Selling at a very low price of Rs. 4,799, can the phone be the bridging gap between lower end keypad based phones and a full touch screen device? Lets find out in our review.

Check out our Unboxing here 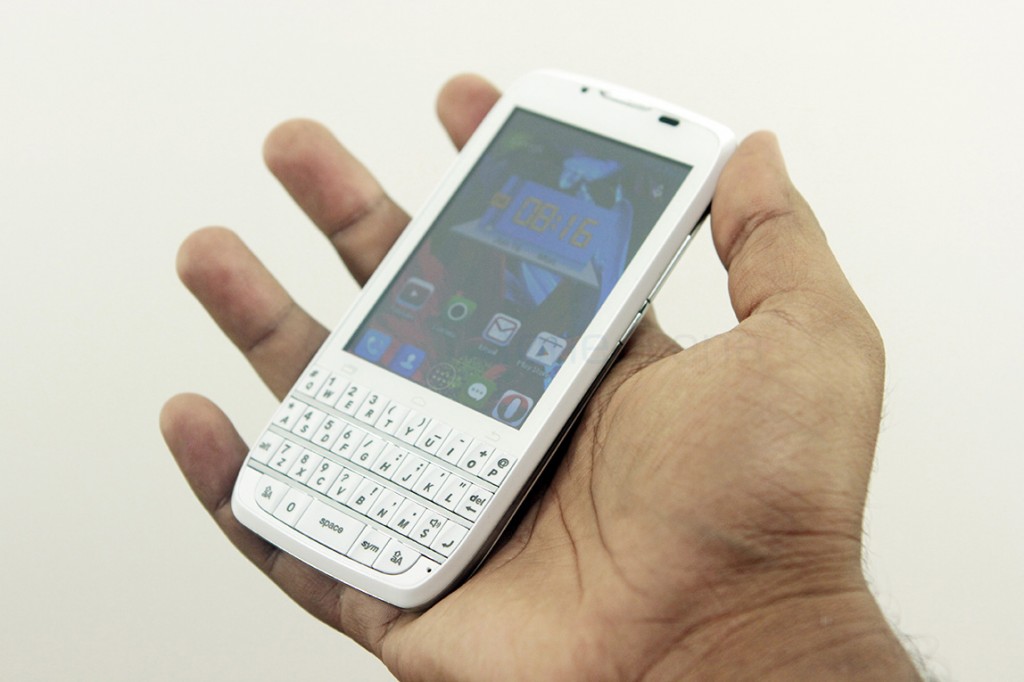 The design of the Spice Stellar 360 is relatable to previous attempts at marrying a touchscreen device with a dull sized keyboard. However, the 3.5 inch screen on the phone makes it a bit different, because the ratio of the screen is not 4:3, like other “touch and type” phones. And in terms of build quality, it is completely plastic, of the less stronger variety, which is not surprising considering the price, and no complaints really, this is a known compromise. 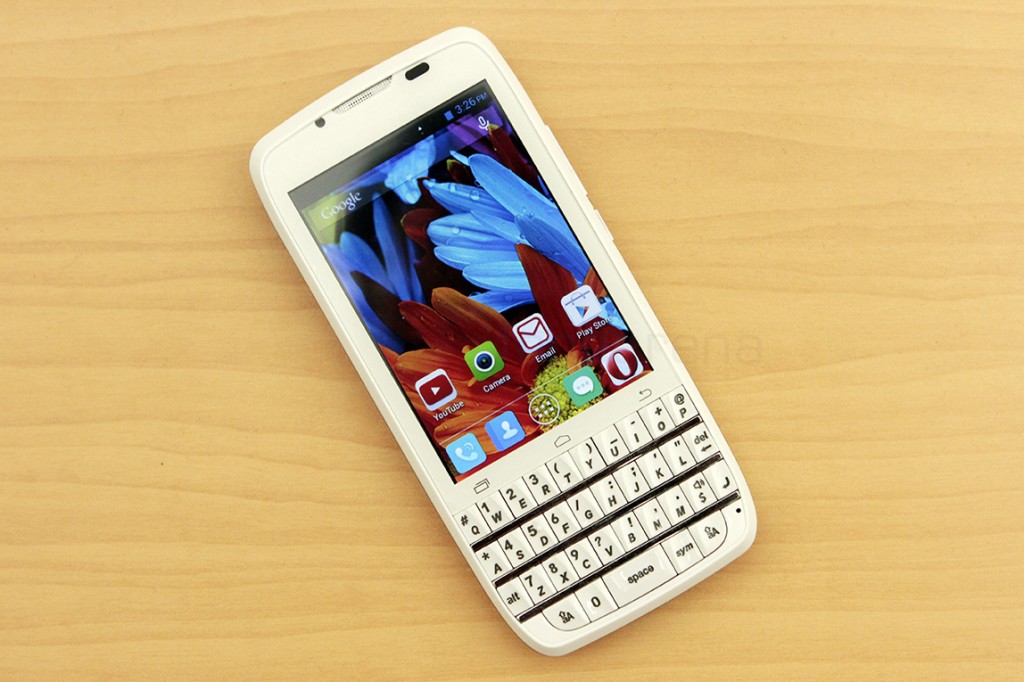 The front face of phone has the touchscreen on top of the qwerty keypad, and between them lie the three capacitive Android short cut keys. These short cut keys offer haptic feedback but we found ourselves mistakenly hitting them again and again while using the phone. Spice should have use hardware keys for them, which would make better sense in this form factor. 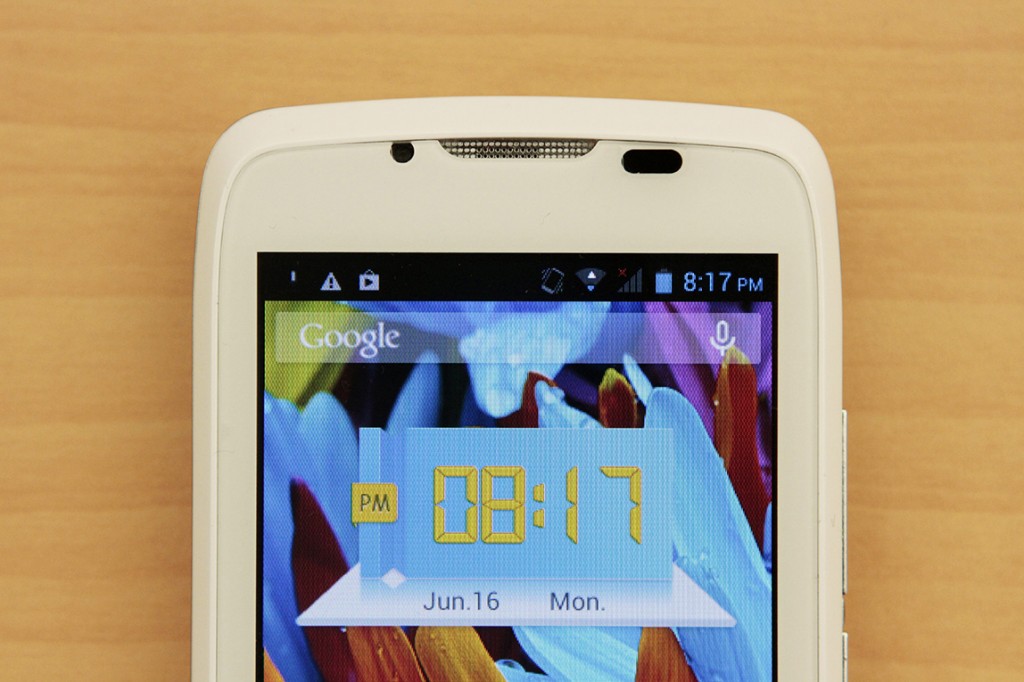 Above the display, we can find the ear piece, the 1.3 megapixel front facing camera and the usual couple of sensors. 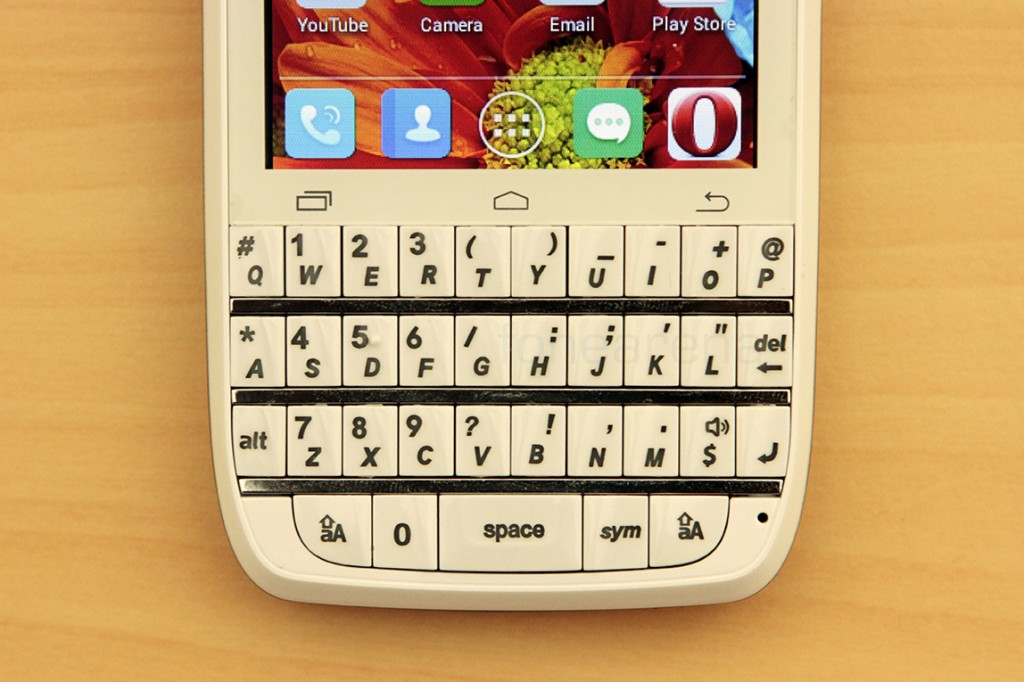 Below the display is of course the qwerty keyboard that plays a central role in this device. It is styled like BlackBerry’s keyboards, but is definitely not as tactile. More on this later. 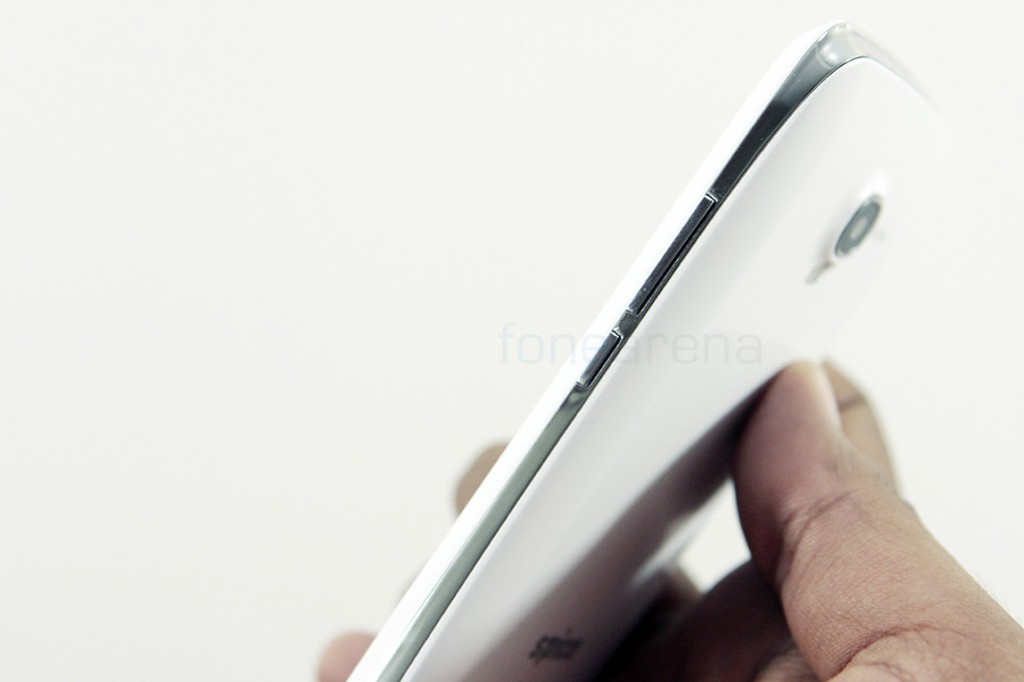 Turning to the sides, over at the right we have the volume rocker and the power lock switch. These are placed in the chrome coloured plastic strip that is sandwiched between the two white glossy plastic parts. 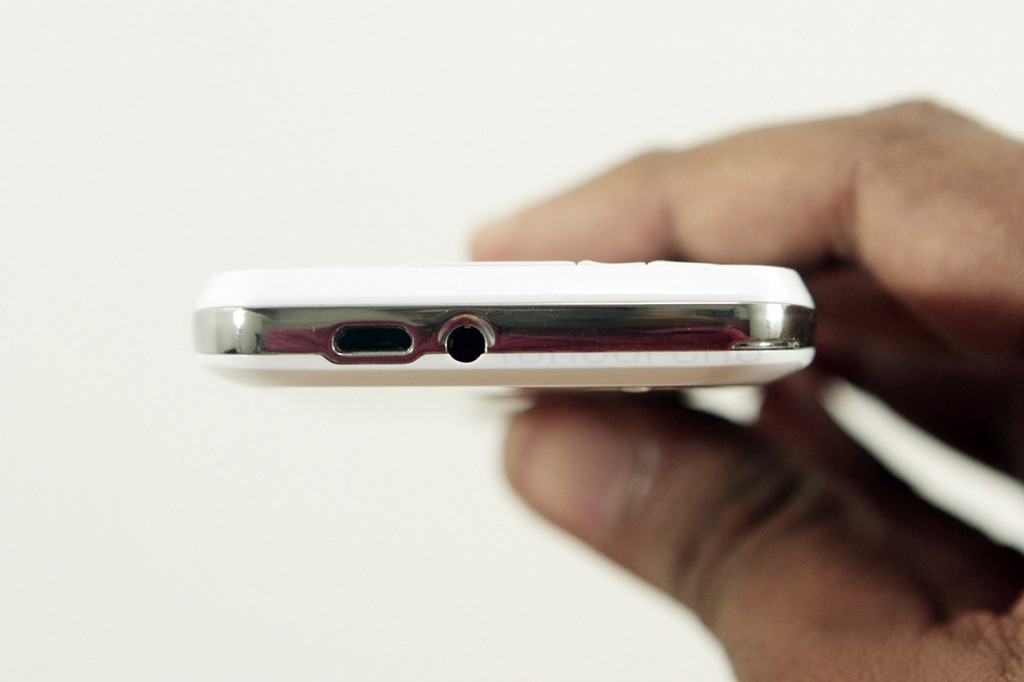 The top and the left sides are bare but the bottom part packs the 3.5mm audio jack and the micro USB port for charging and data transfers. 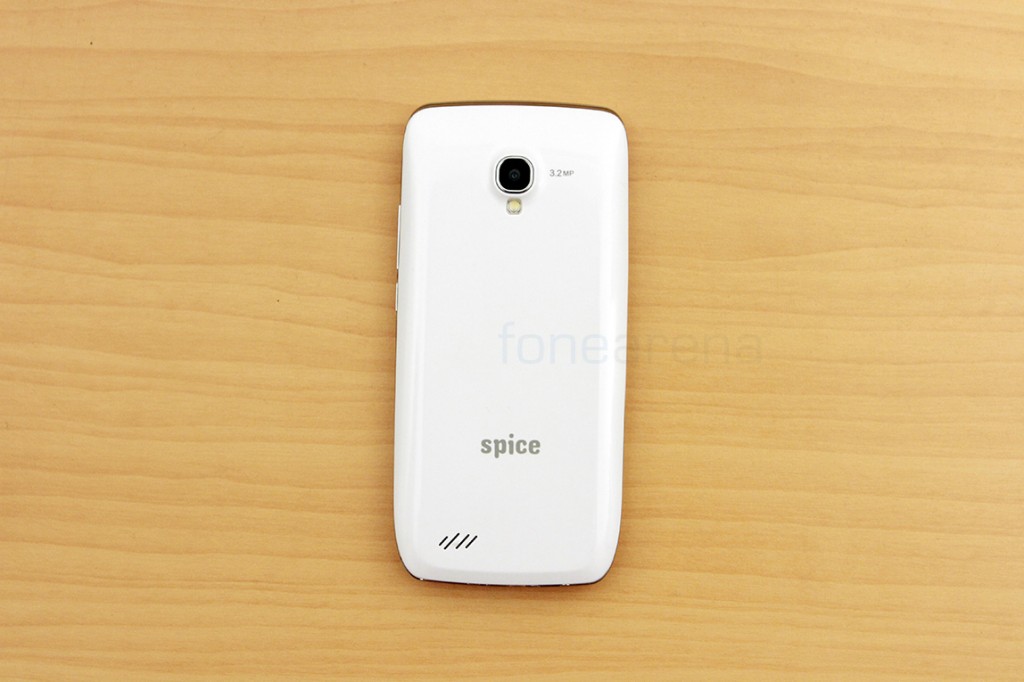 Over at the back we have the 3.2 MP camera and the loudspeaker, along with the Spice logo. 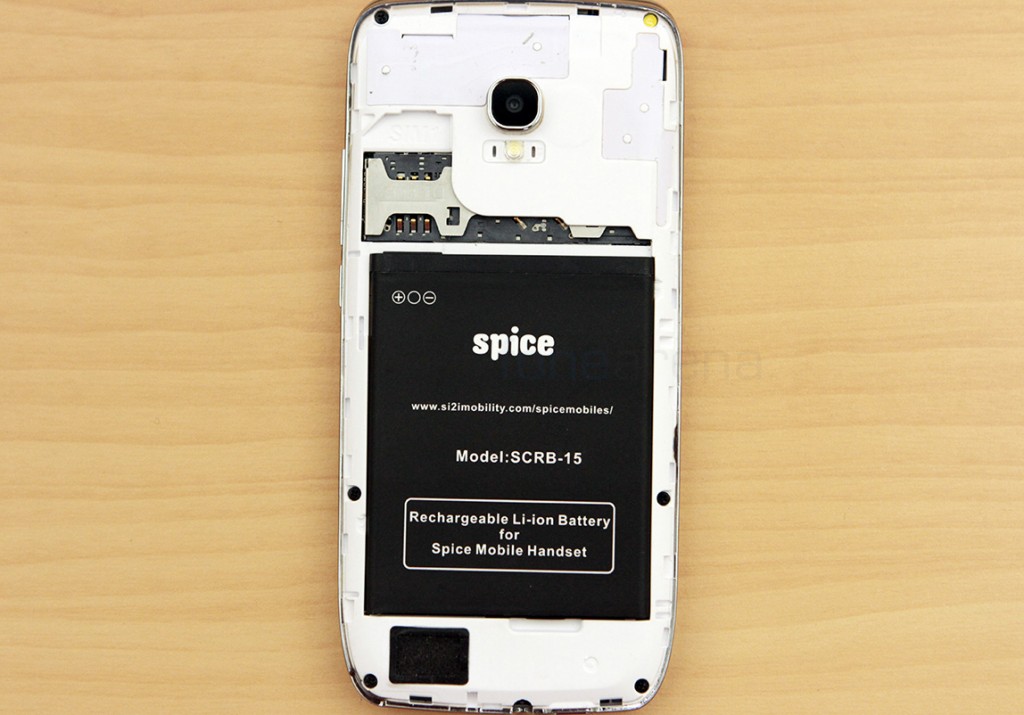 On removing the back panel and the battery, we can see the two SIM card slots, both of the normal size and a micro SD card slot.

Lets focus on the different parts of hardware now. 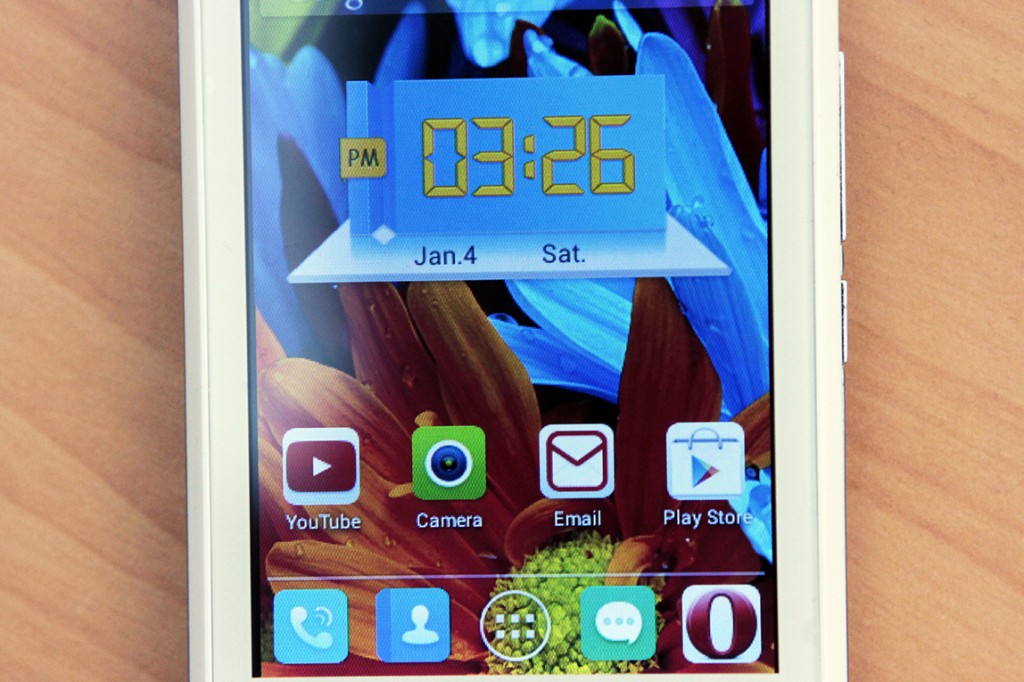 As mentioned earlier, the display on the front is a 3.5 inch screen, with a resolution of 480×320. The pixel density won’t matter because the display is going to be bad anyway. It has poor viewing angles, for a start, making it unusable even when on a table. A slight tilt will make colours invert and swatches of gray appear on the screen, and increasing the brightness doesn’t help. The screen resolution and the size is exactly the same as the original iPhone, so it is a bit wider than the usual 15:10 displays, and actually helps in accommodating that keyboard. Overall the display is a downer, mainly because Spice had claimed it will be good, on the side of the device’s retail box. 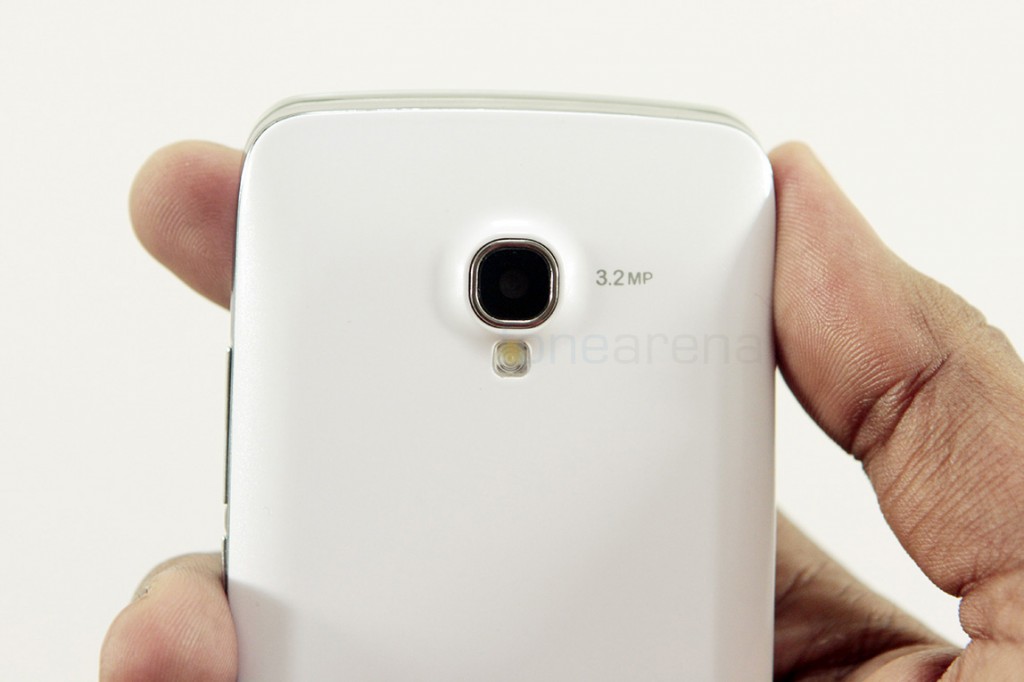 The Spice Stellar 360 sports a fixed focus 3.2 megapixel camera on the back, which is, as good as you’d expect from a phone at this price range. The pictures, even in daylight, came out noisy and are not usable when it comes to sharing even, but if you are looking to just take a quick picture of documents, or just capturing a memory, this would do.

Here are some camera samples from the device –

Here is a video sample too, to show how it performs in this department.

It records at 480p but can record at 720p too, thanks to the chip that powers it. Lets talk about the internals now. 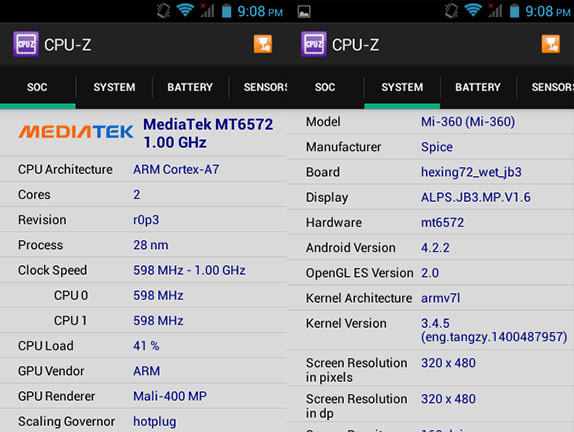 The Spice Stellar 360 is powered by the MediaTek MT6572 chipset that boasts a dual core 1.3 GHz processor and a Mali 400 GPU. For a low end phone, this is pretty good, considering the fact that most of the casual apps and games don’t really require much power. Unsurprisingly, the phone has just 512 MB of RAM, making things less smoother when more than a single app is running in the background.

General performance is decent for the price, but you will notice occasional lags and stutters, as is typical with any Android phone with small-ish RAM. We also ran a couple of benchmarks, which can give you some idea of the phone’s raw performance.

We also tested some casual games, mainly portrait, as the phone gets weird when playing anything landscape. The games were fluid even at their highest graphic settings, so killing time won’t be a problem, at the least. Overall, the performance in day-to-day usage won’t be a dealbreaker if you don’t mind the occasional lag. However, gaming is good enough, we felt, except for the weirdness of the phone in landscape, even while watching videos.

On the storage side, we have 2.59 GB out of the rate 4 GB of internal storage, with about 2.37 GB available for the user. The support for memory cards and the option to change the default write disk eliminates the low storage problem. Considering the RAM, the system gets about 215 MB of free RAM to manage all the default background tasks and then some. 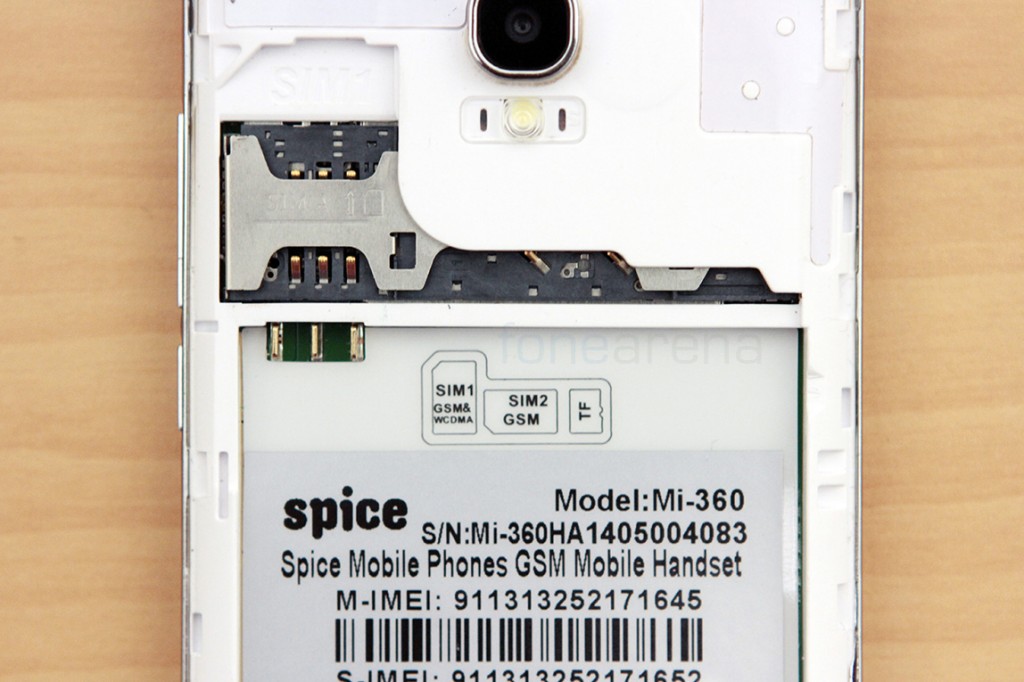 The phone comes with the standard dual SIM connectivity options with one SIM supporting 3G at a time. The configuration settings are similar to all the other Mediatek solutions that we are seeing on the market. You can set a default for calls, SMS and data, or control it whenever an action is triggered. The dialer app is purpose built to take advantage of the dual SIM setup, so that makes things a bit easier.

Other connectivity options include the usual WiFi, Bluetooth, GPS and FM Radio with stereo audio. 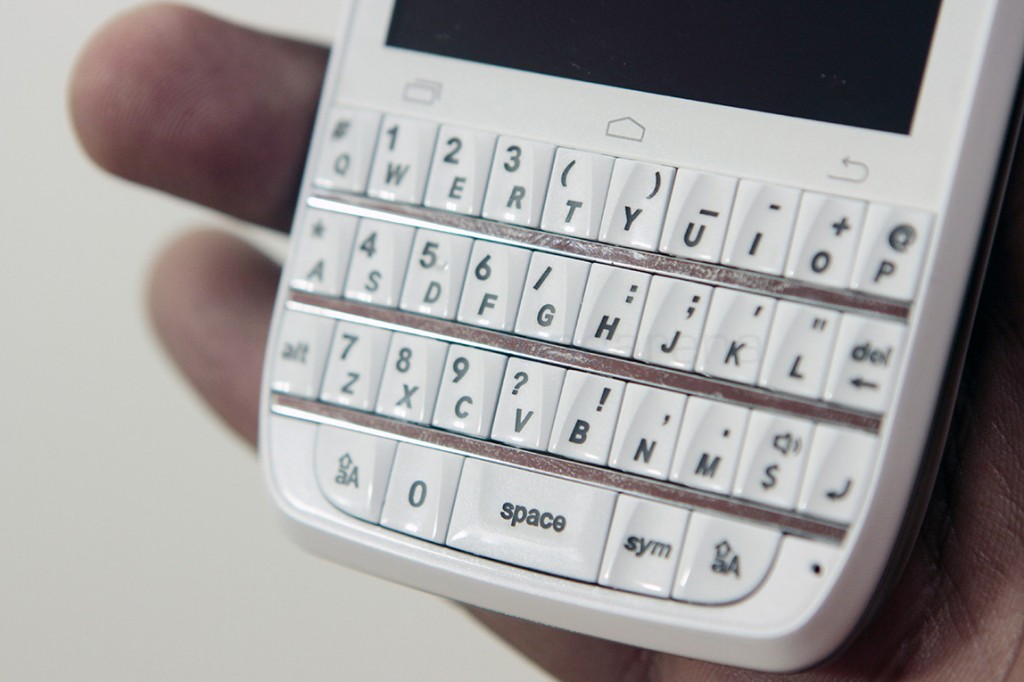 This is the most important aspect of the Spice Stellar 360, the full size QWERTY keyboard. Modeled just like the ones on BlackBerry, it creates only an illusion of tactility and performance, as the keys tend to be on the cheaper side, proving to be a harder “click” than what we expected. The soft push that makes the typing effortless, is missing, and makes the whole experience a struggle for a person coming from touchscreens. 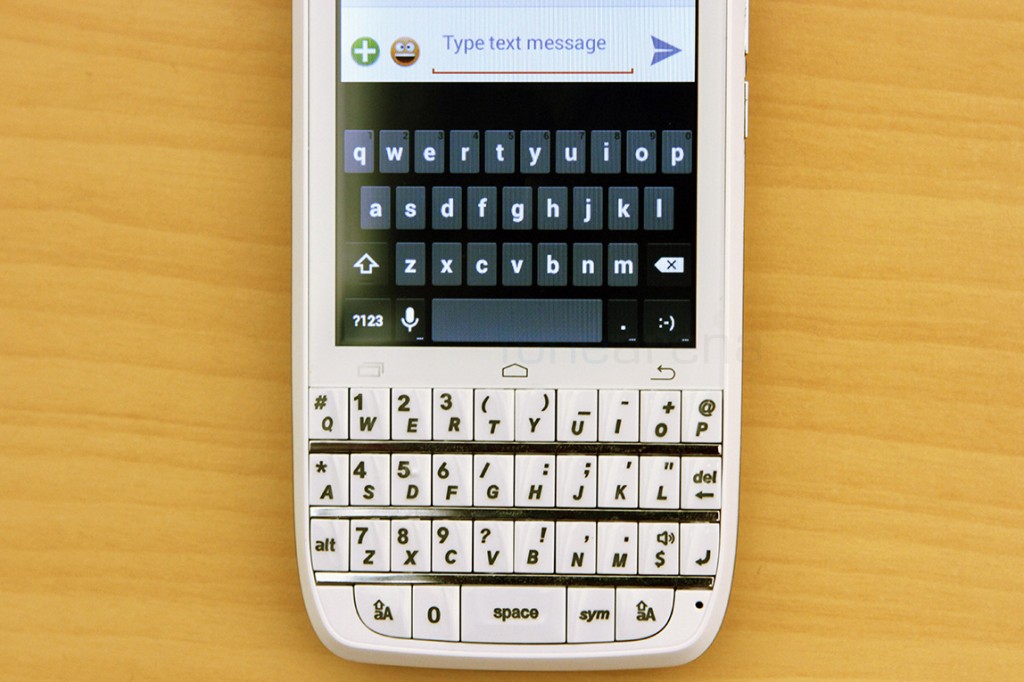 The keys are slightly angled based on the side it is in, but it doesn’t really help making the typing experience faster. But again, this might be home for people who have yet to experience a touch screen keyboard. Android is flexible enough to accommodate text input the traditional, but without a navigational D-pad, the choosing of symbols or even just moving the cursor requires touch screen input, which frankly breaks the whole experience. More than once, we were left with gaping at a hardware as well as a software keyboard at the same time. The worry is that, the screen typing felt better than the hardware, but again, this is only for the user coming from touchscreens, it might be entirely different if you have been using just T9-based phones. At this price, we are not expecting quality materials or anything, but Spice could have given us a D-pad and hardware short cut keys instead of capacitive ones, that would have made the experience better, in our opinion. 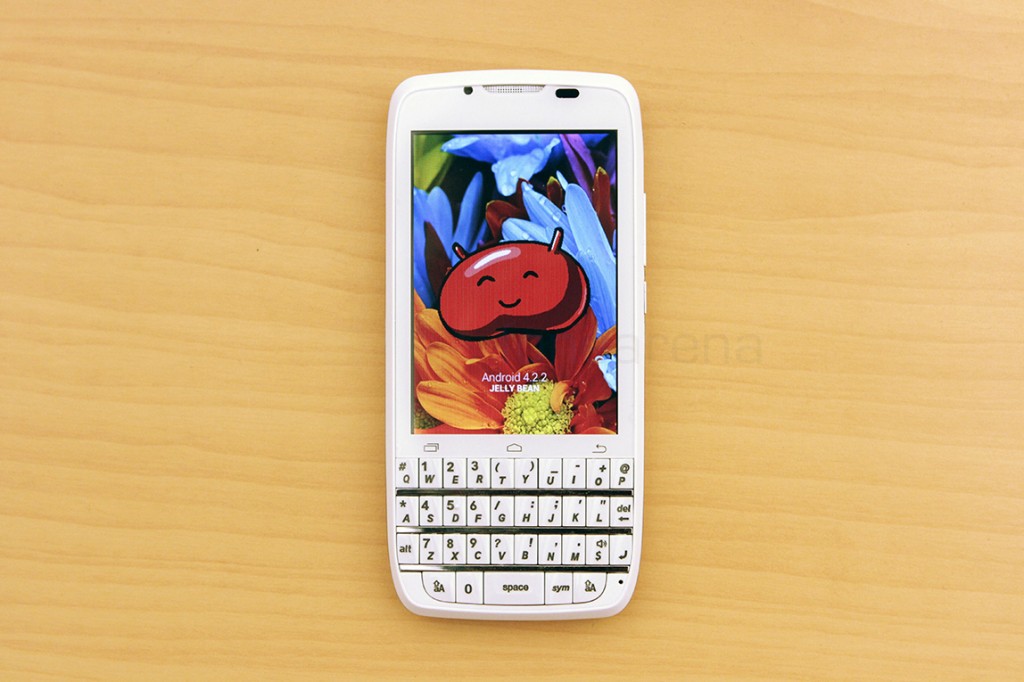 Coming to software, the phone runs on Android 4.2.2 Jellybean, slightly modified by Spice for a tiny little bit extra personalization. The UI’s colour scheme and “Scenes” can be changed, but otherwise, this is pretty much stock Android. The camera app is the usual Mediatek camera app though, which has options similar to the others. As a part of Jellybean, you do get things like quick settings, but Spice has also added its own touches like lockscreen icon notifications for apps. These, though minor, add to the stock experience.

On the apps side, the default Google and utility apps aside, the phone also comes with plenty of pre-installed third party apps including Facebook, Twitter, Whatsapp, BBM and so on. Spice has also bundled its own Cloud backup service, Spice cloud, and Spice gang, a direct file transmission service that relies on WiFi direct. The overall software experience met our expectations, but a 4.4 KitKat update, which might not ever come to this device, would have been great for an out of the box experience, may be next time, or an update soon. 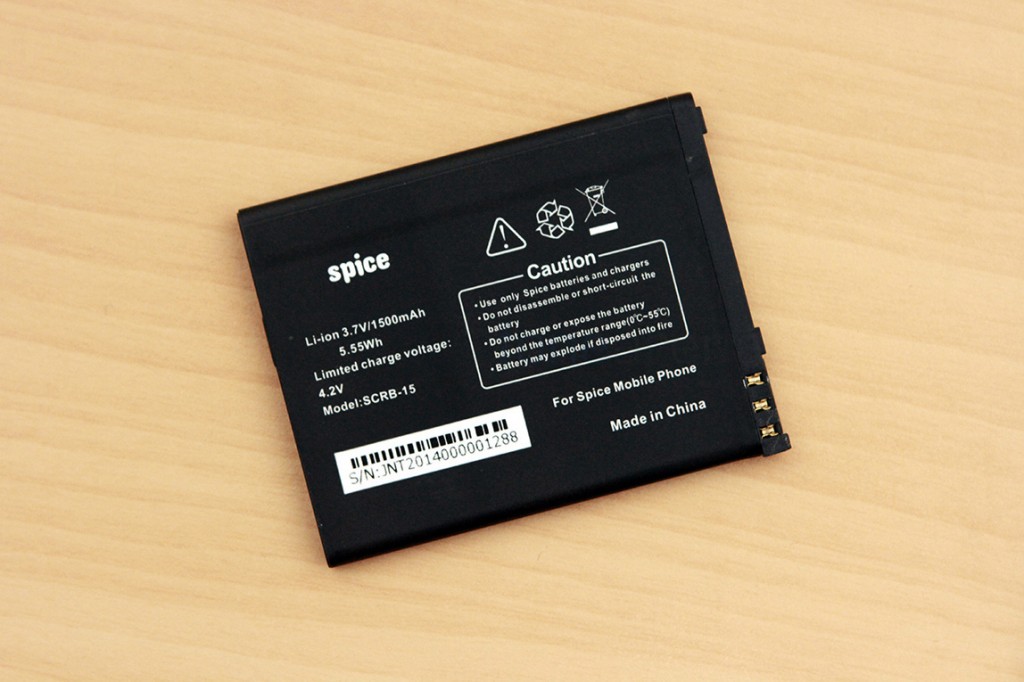 The Stellar 360 comes with a 1500 mAH battery, which, theoretically could be quite enough for a small low resolution screen and a conservative processor. Practically, we found it to be similar, with us getting nearly a day’s worth of usage, with installing apps, using the WiFi as well as the 3G network, with 10% still remaining. Obviously, a Dual SIM setup with more time for calls would tax it more, but we figure you’d be able to replicate our battery life usage as well. 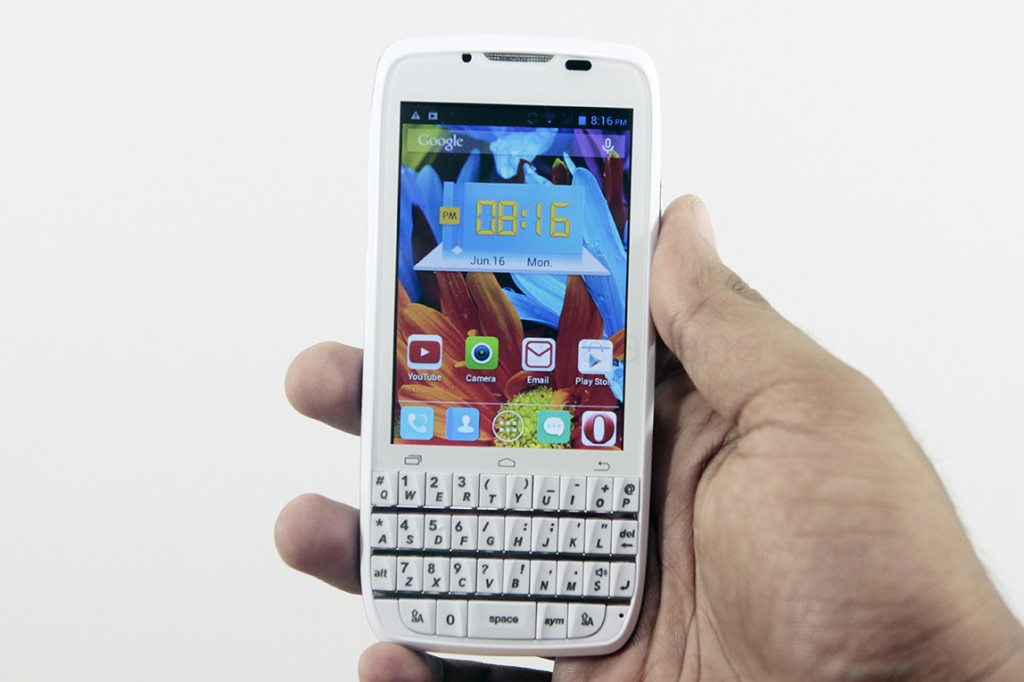 In the end, the Spice Stellar 360 is more of a niche product than anything else. It’s a hybrid that wants to make you type on a real keyboard, which some still prefer, while offering you the same modern experience that full touch screen phones offer. Many companies have gone down this route and failed to entice users back to the keyboard, but have still served the loyal qwerty fanbase. For touch screen users, using the keyboard is pointless and for qwerty lovers, this particular keyboard will be painful, and even people willing to go for an easier form factor transition from T9 or lower end qwerty devices might find it daunting. However, if you are one of those that can’t live without a qwerty for texts, and want all the goodness of an Android device, the Stellar 360 is one of the few options you got, and hey, it might work out for a decent second phone.