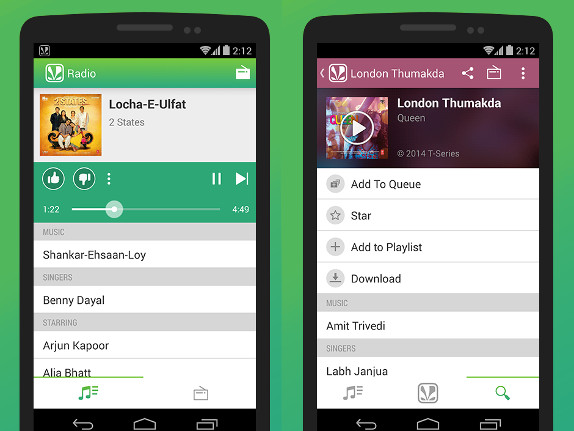 Saavn, one of the popular Indian music streaming service has updated its Saavn Music app for Android to version 3.0. This brings a new user interface that lets users access Saavn Radio, new releases, top playlists and song of the day easily from tiled homescreen  and full-screen album art in the Saavn player. This update also brings better support for low-end Android smartphones with smaller screens and support for Android tablets.

Saavn app for iOS was updated to version 3.0 few weeks back with new UI and features. The iOS app increased Saavn’s daily streams on iOS by 20%, increased radio streams by 7.5x, increased regional language streams by 15% to 50% per language, and increased Saavn’s overall daily unique users by 10%, says the company. The Android app has been developed in collaboration with Google’s Android teams and provides full Android tablet support, it added.

Regarding the new Saavn update, Anurag Gupta, CTO and Co-founder of Saavn, said

India is an Android-driven market, and 70% of Saavn’s listeners in India are on Android. We’re excited to deliver the best possible user experience to the majority of our listener base with this new app. It’s been carefully crafted to optimize the multiple screen experience, and to work seamlessly across a wide range of Android versions and hardware configurations.