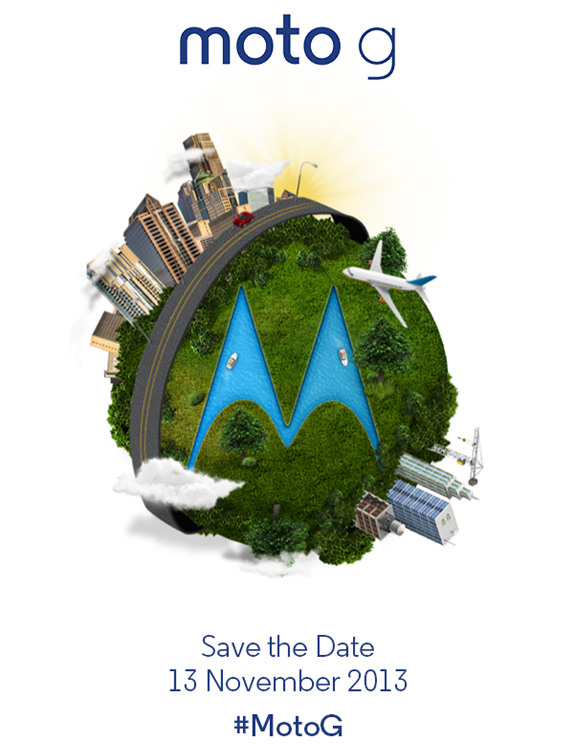 Motorola has officially announced that the Moto G, the company’s new mid-range Android smartphone would be unveiled on November 13th, after some rumors. In a tweet Motorola Mobility says, “Time to say hola, olá, g’day, hallo, bonjour, namastē, hello to #MotoG” which includes greetings in several languages in different parts of the world such as Spanish, Portuguese, Australian, German, French, Hindi and English. The Motorola Moto X that was launched back in August is only available in the U.S. Looks like Motorola is planning to launch this mid-range smartphone in other markets where the Moto X is not available.

According to earlier rumors, the Moto G is expected to come with a 4.5-inch (1280 x 720 pixels) edge-to-edge display at 329 ppi with Corning Gorilla Glass protection, powered by a 1.2 GHz quad-core Snapdragon processor and run on Android 4.3 (Jelly Bean). It is expected to come with a 5-megapixel rear camera with LED flash, 720p HD video recording at 30fps and a 1.3-megapixel front-facing camera. It is also likely to come in 8GB and 16GB variants and pack a 1950 mAh battery.

Hope we can expect Motorola to launch the phone in India, which would be the first smartphone since the Razar Maxx that was launched back in June 2012. Motorola did not announce the time of the event, but users can register at moto-g.com to watch the live online announcement.