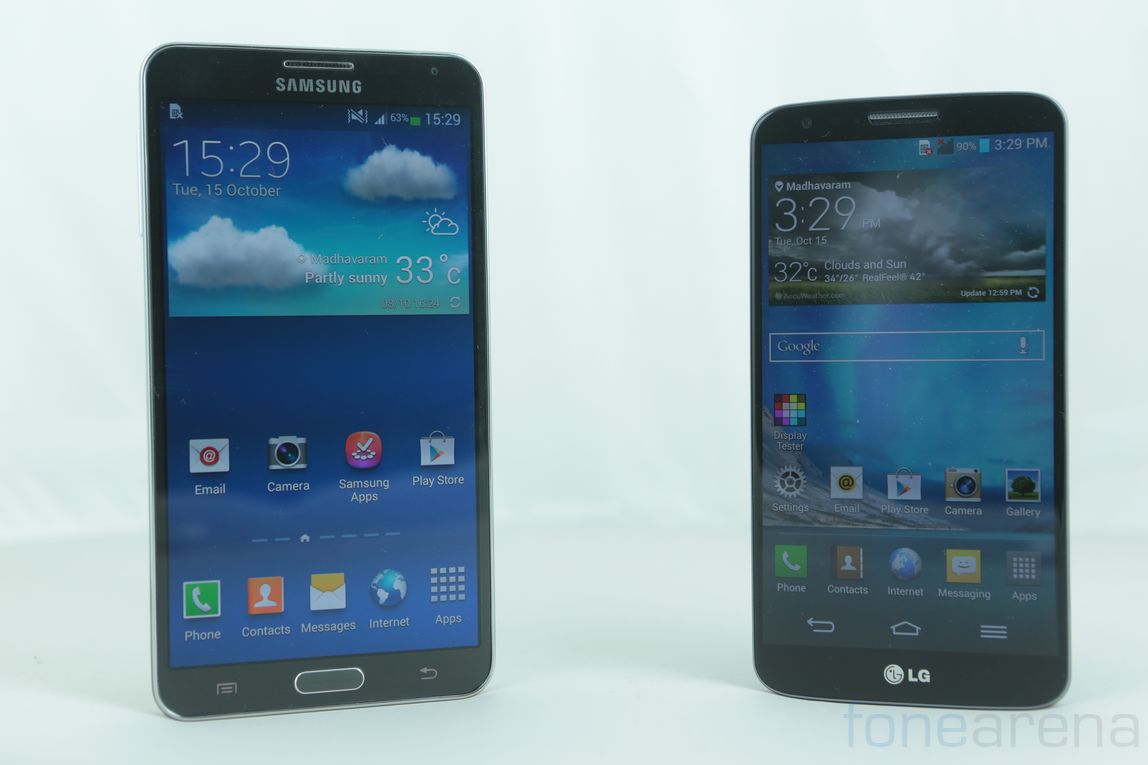 You can check out the in-depth comparison video right below.

Differences between the Samsung Galaxy Note 3 and LG G2 start right from the design and looks. Samsung has tried something different with the Galaxy Note 3 in terms of material as they have opted for a faux leather at the back and the experiment seems to have worked pretty well. LG, on the other hand, have gone back to plastic which doesn’t give an advantage to G2. 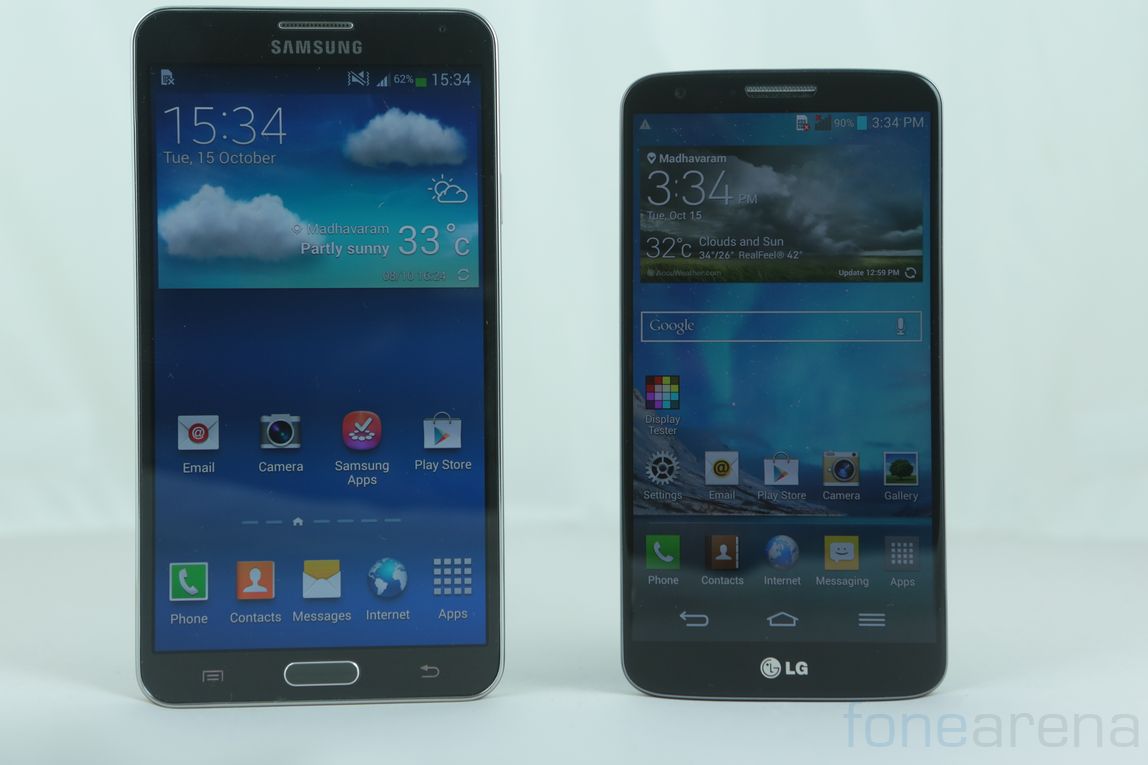 In terms of dimensions, the Samsung Galaxy Note 3 is taller and wider than LG G2, but is noticeably thinner. As far as weight is concerned, Galaxy Note 3 weighs 25g more than LG G2

The positioning of keys is different in both the devices as LG G2 does not have any keys on the sides. On the right side, we have just the power lock key on Galaxy Note 3 and nothing on G2. 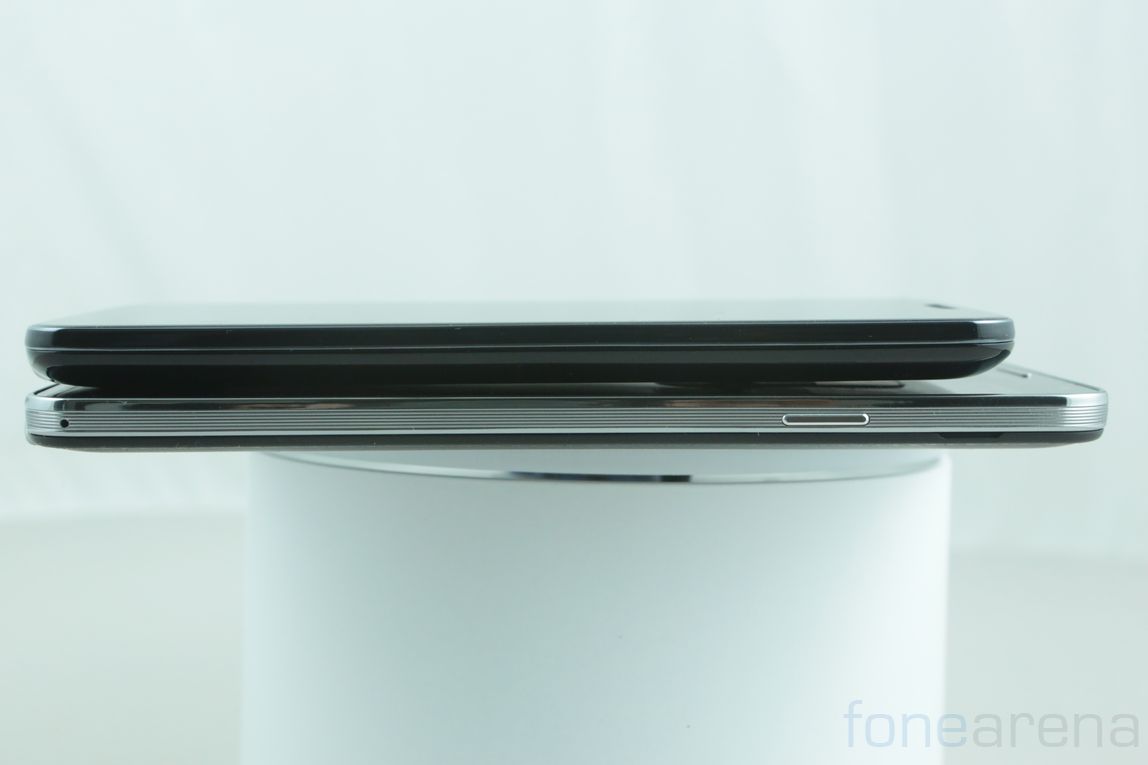 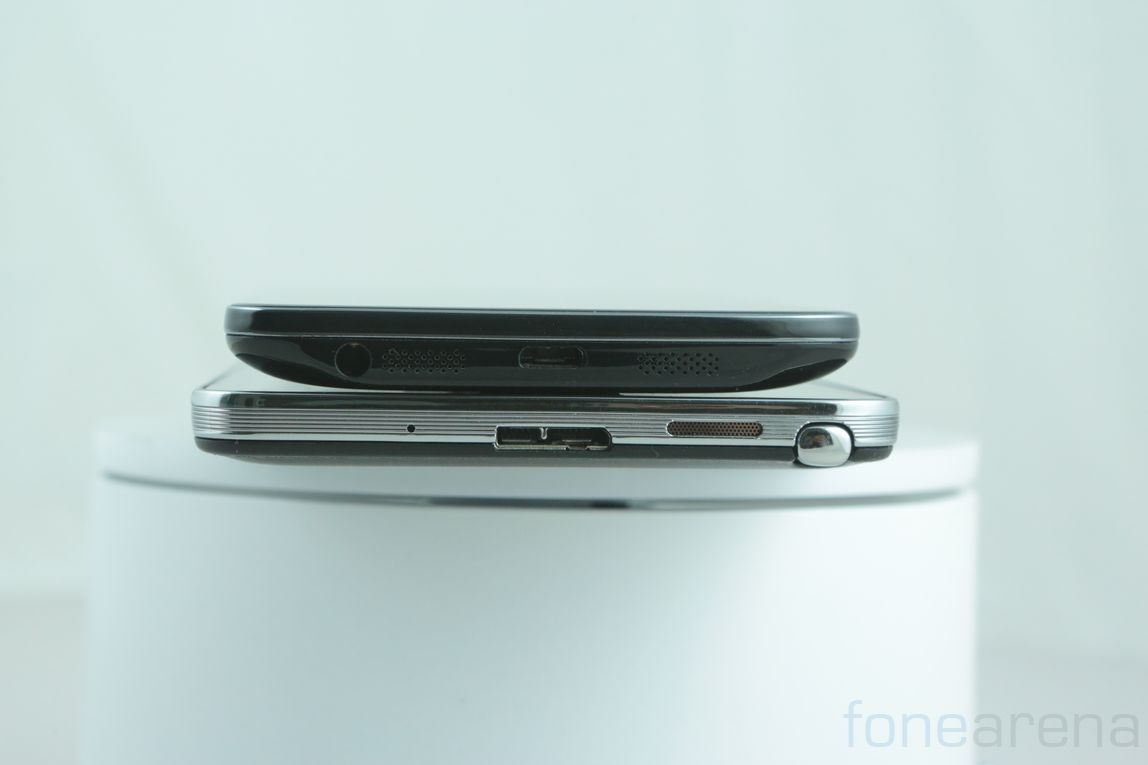 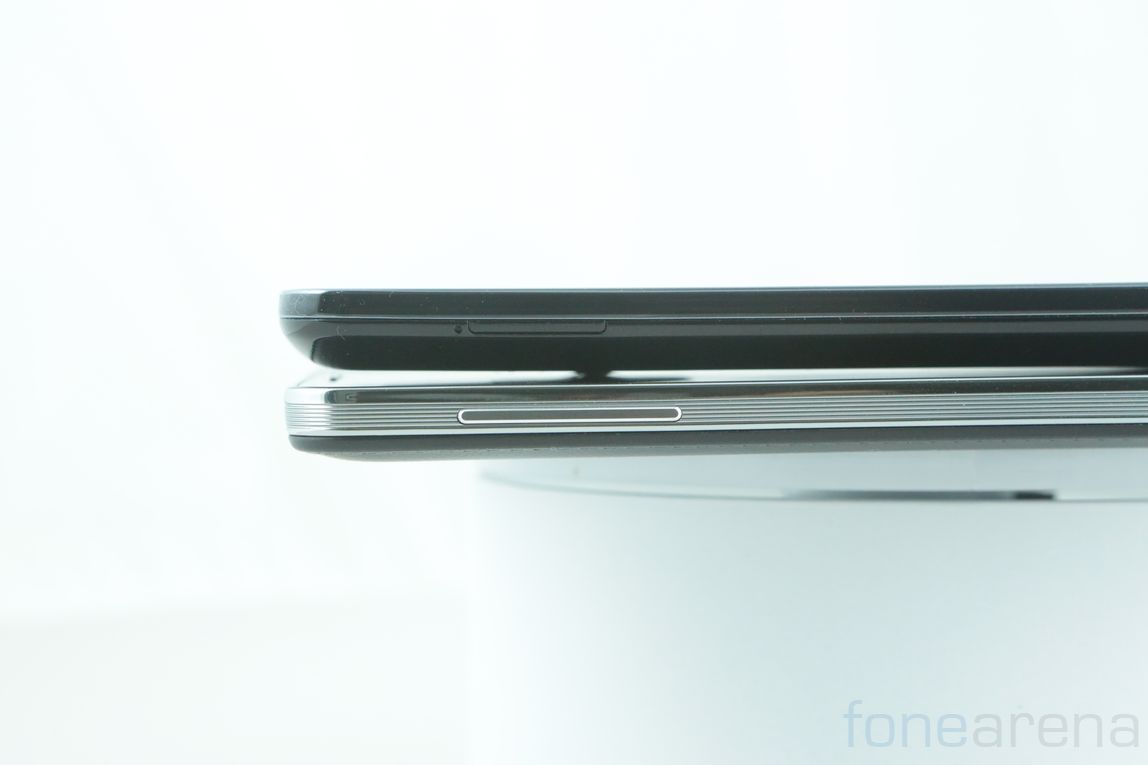 On the top we have the secondary microphone and IR blaster on both the phones while there we also have a 3.5mm audio jack on Galaxy Note 3. 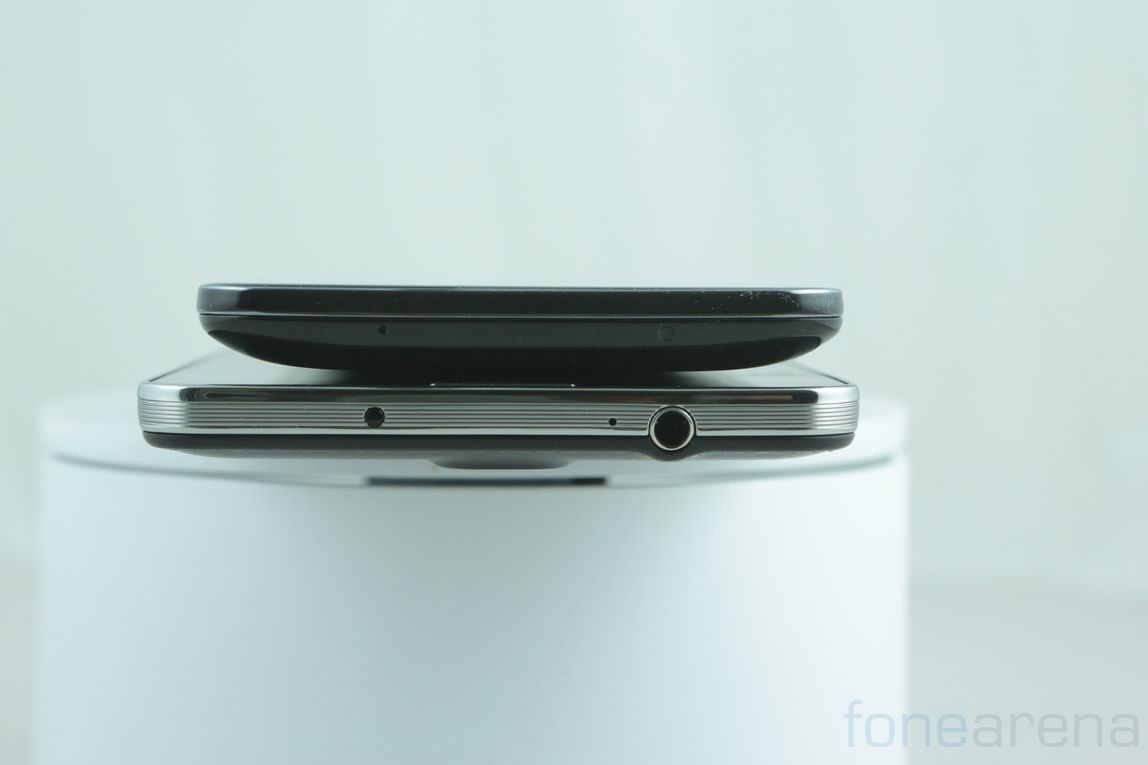 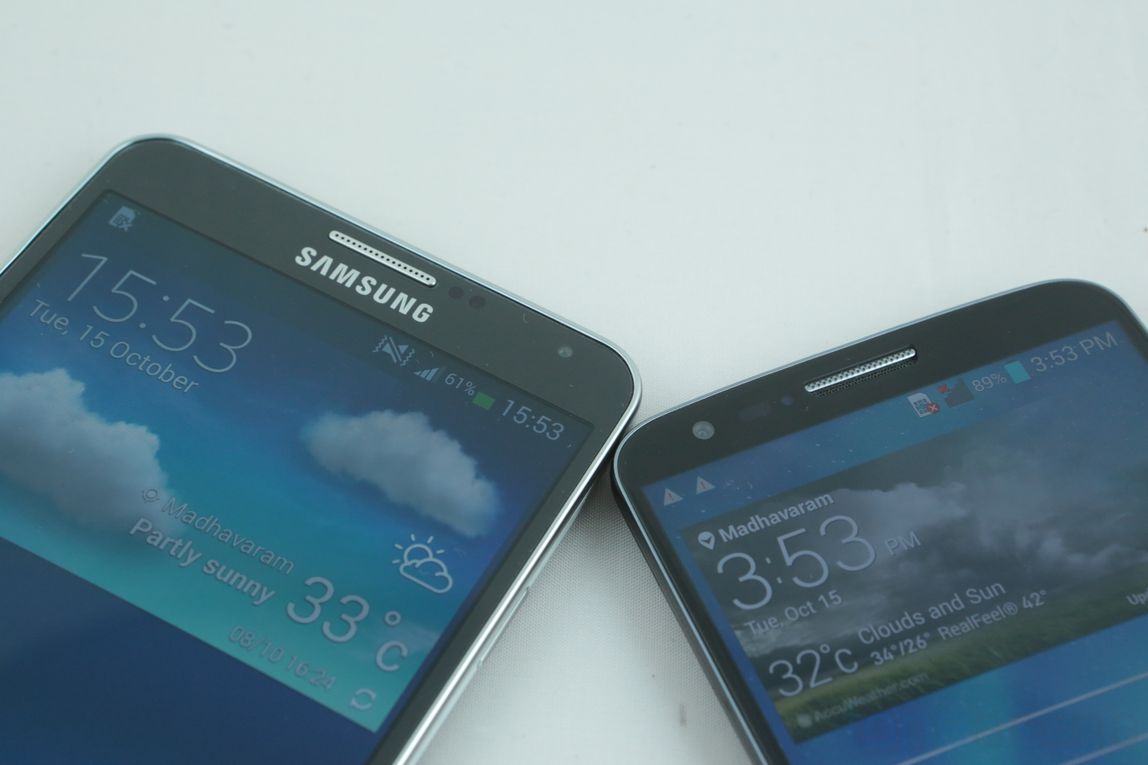 The bezels on the both the phones are quite thin, but the one on the LG G2 is incredibly thin and gives the device a great look.

Below the display, we have the usual Samsung arrangement with a physical home button at the center and capacitive touch keys on either side on Galaxy Note 3 while there is nothing other than the LG logo on LG G2. Navigation is restricted to customizable on-screen buttons on LG G2. 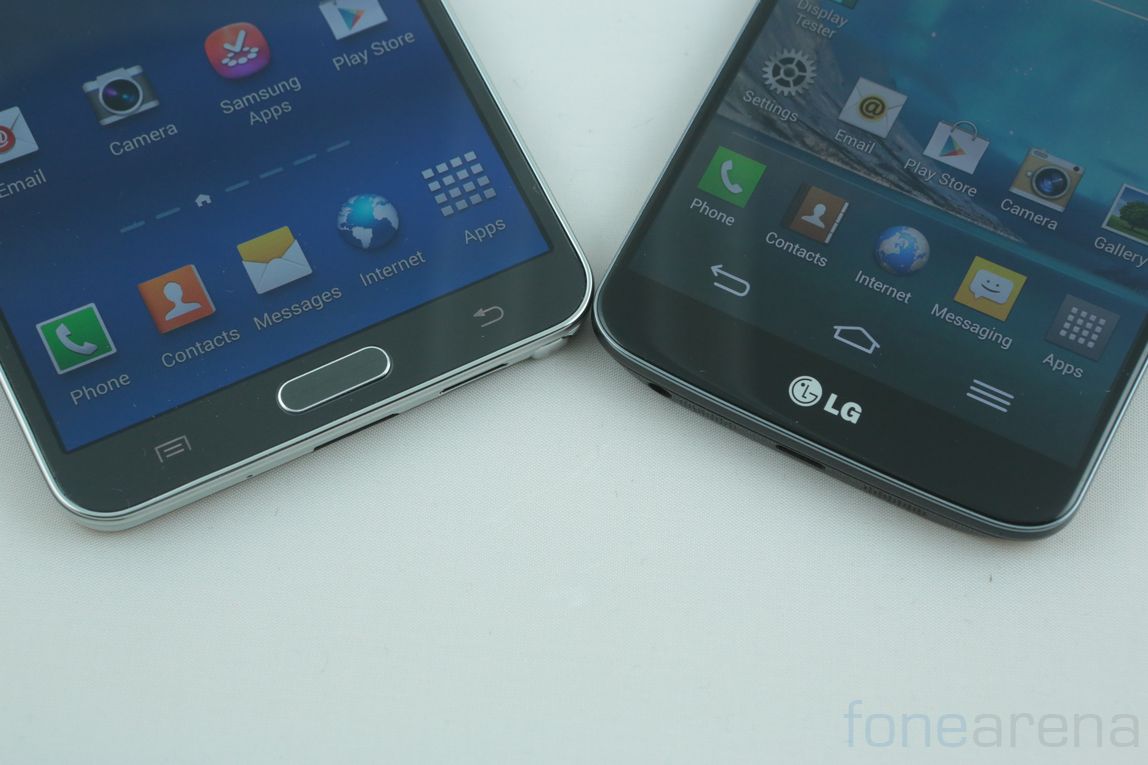 Moving to the back, we find quite a bit of difference. Samsung Galaxy Note 3 has an excellent faux leather finish that gives it a great texture and prevents it from scratches and finger prints while the LG G2 has a regular glossy textured plastic finish that makes it a finger print magnet and is prone to scratches. There is a 13MP camera with an LED flash on the both the devices. On LG G2, the back has more than just the camera. There is a power lock button below the camera situated at the center of a volume rocker. This new design may require some time to get accustomed to. 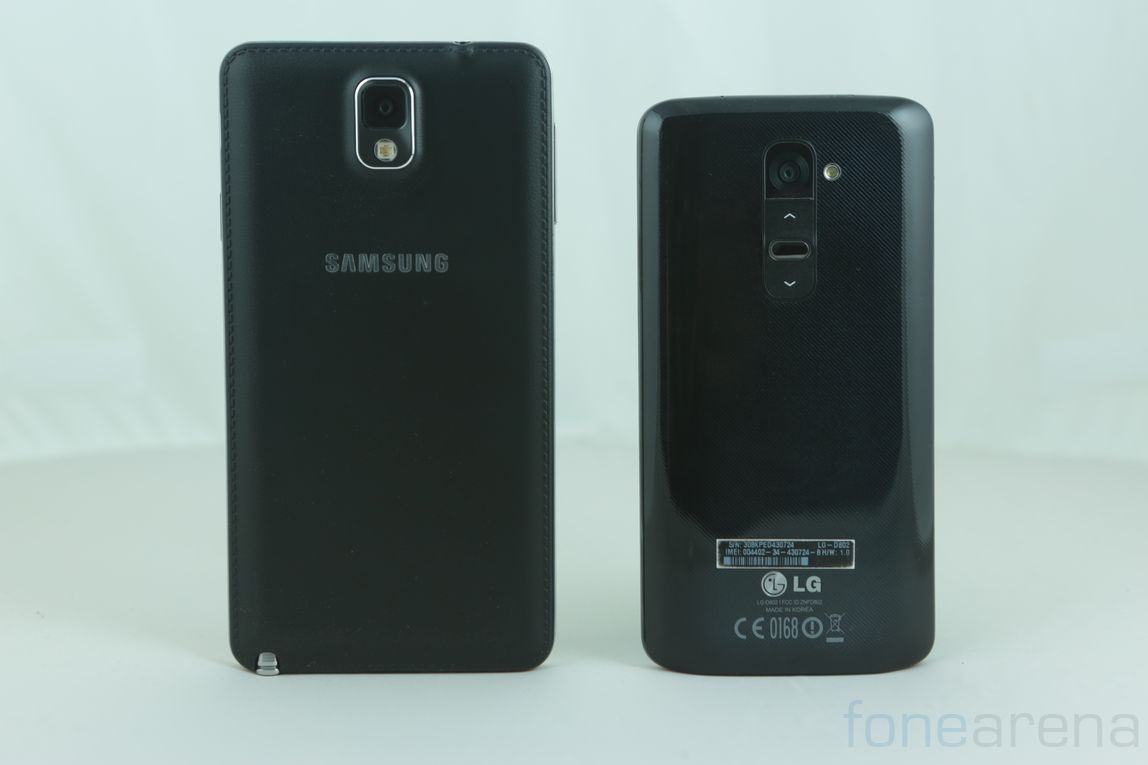 Samsung Galaxy Note 3 comes with a removable back cover while LG G2 is closed shut. Opening the back cover, we see that a microSIM card slot that is not hot-swapabble and a hot-swappable microSD card slot are stacked one above the other. 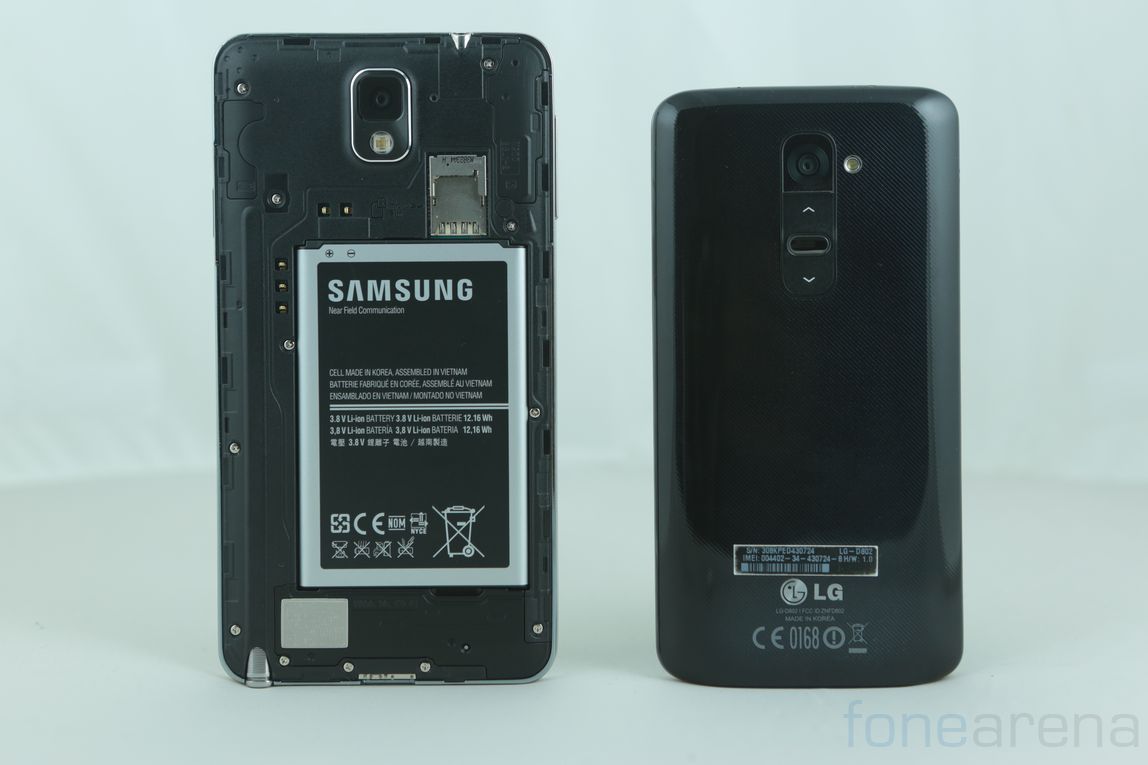 Overall, in terms of build quality and design, it is a tough choice. The textured leather back of Galaxy Note 3 give it a clear advantage over the G2, but LG G2’s compact size and extremely narrow bezels may be appealing for people who prefer smaller phones. 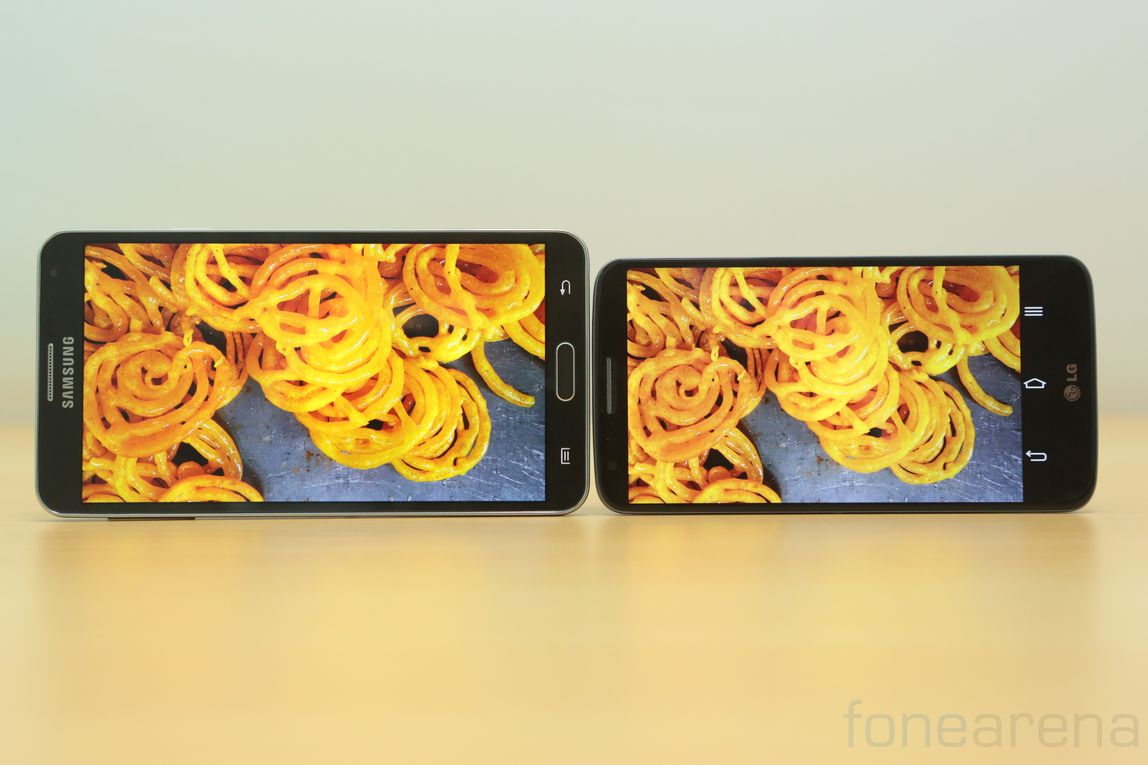 In terms of display quality, Samsung Galaxy Note 3 has better brightness, contrast and a bigger display and that is where its advantages end. In terms of viewing angles and white levels, the display on LG G2 is much better because of its True Full HD IPS+ display. The colors appear largely over-saturated on Galaxy Note 3 while they look quite natural on G2. Being a smaller display, G2 has sharper images.

Overall, the display on LG G2 is slightly better. 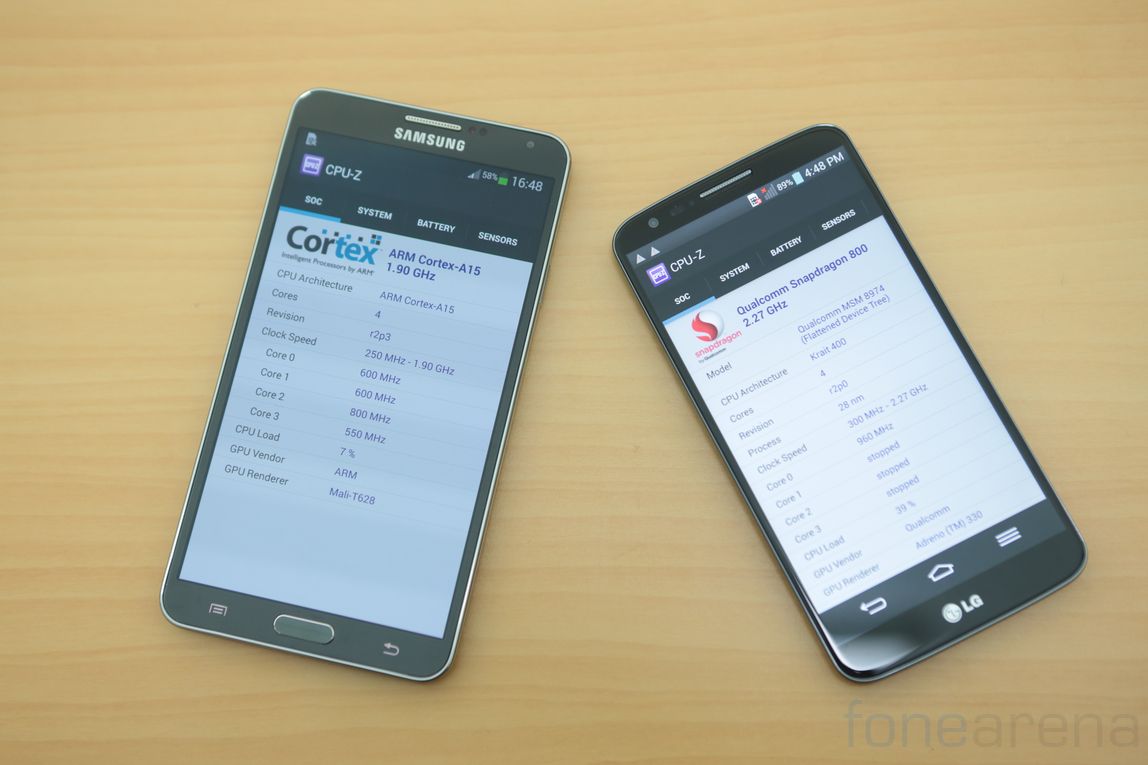 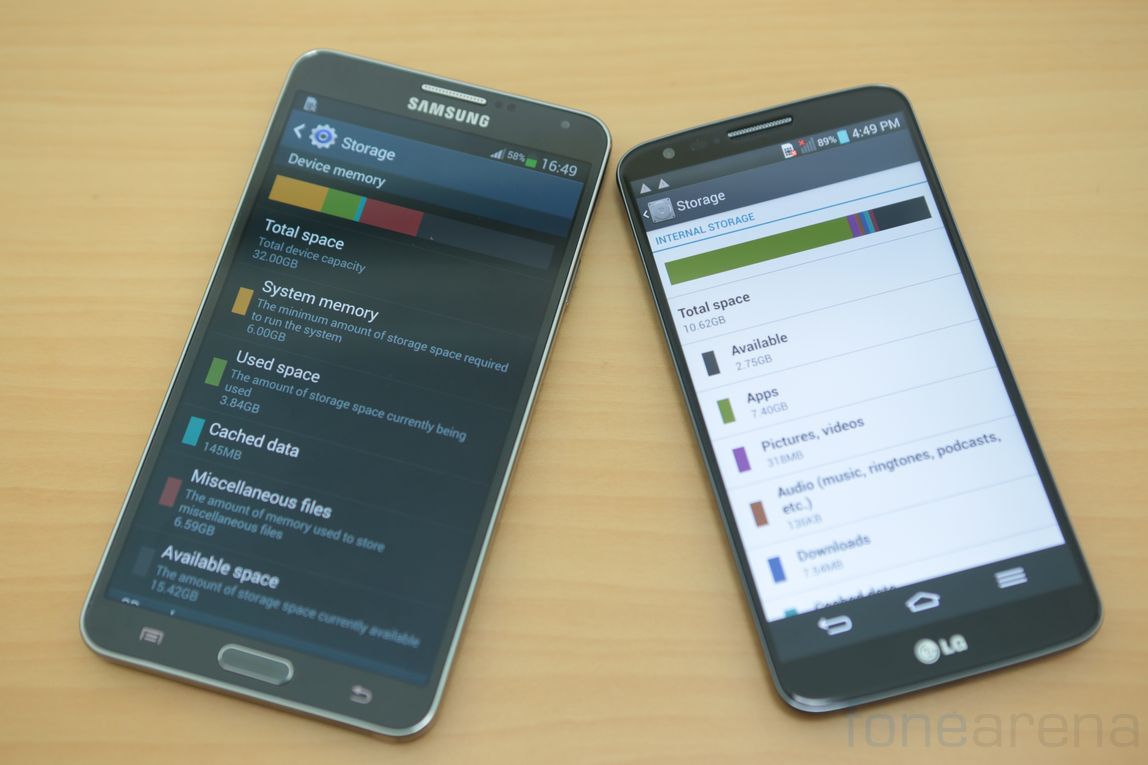 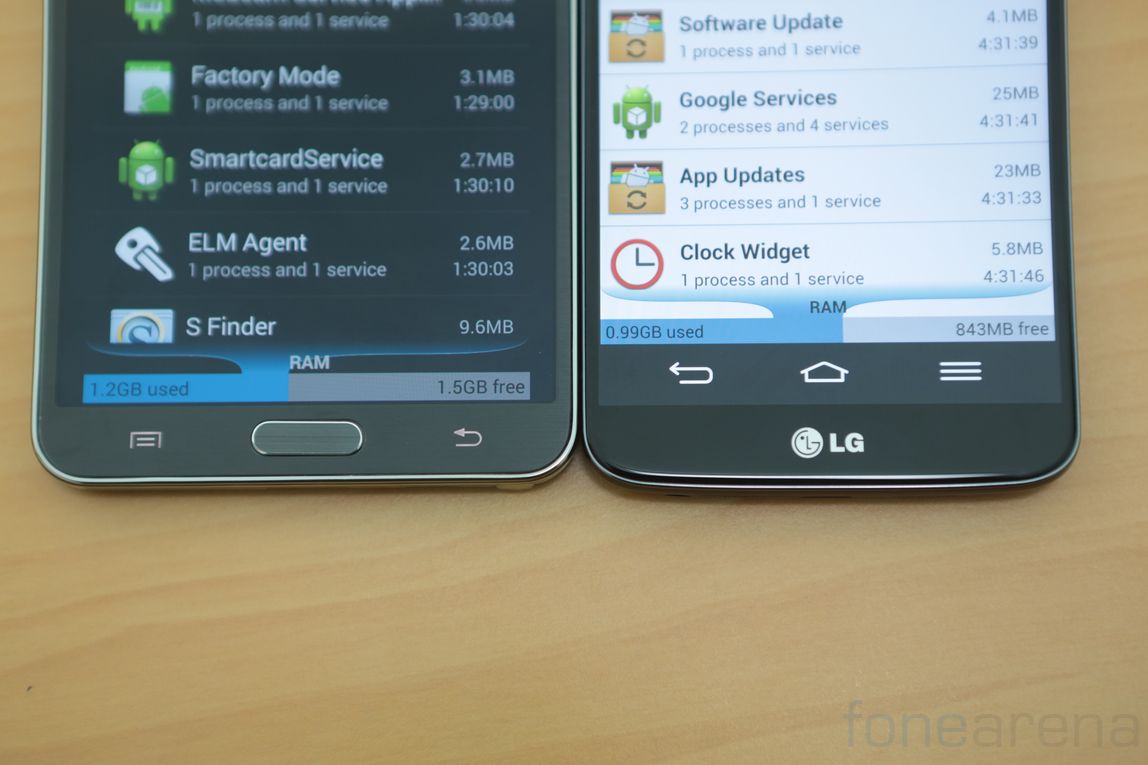 In terms of day to day performance, both the phones are quite snappy and there is hardly a moment you will notice any difference between the two.

In benchmarks, the Galaxy Note 3 and LG G2 perform quite closely in all the benchmarks. 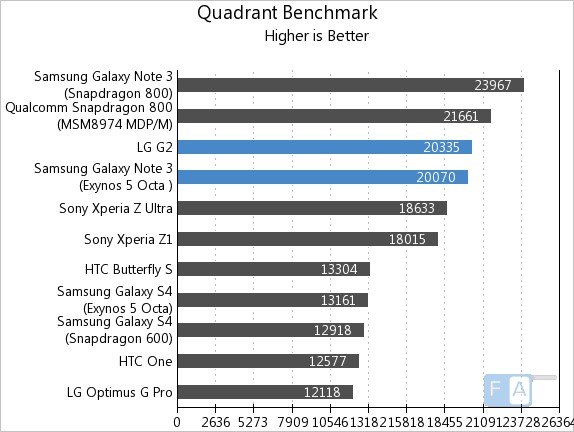 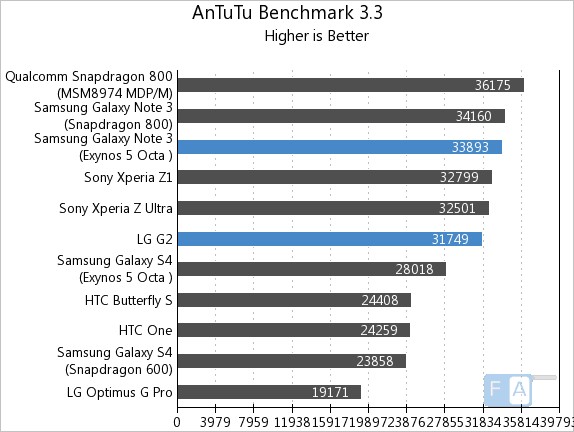 Both Samsung Galaxy Note 3 and LG G2 come with a 13MP camera at the back and a 2MP at the front. Both the phones are capable of recording 1080p videos from the rear camera and front cameras. Both the phones can record 1080p videos at 60fps. The difference between the two phones is that LG G2’s camera comes with OIS(Optical Image Stabilization). 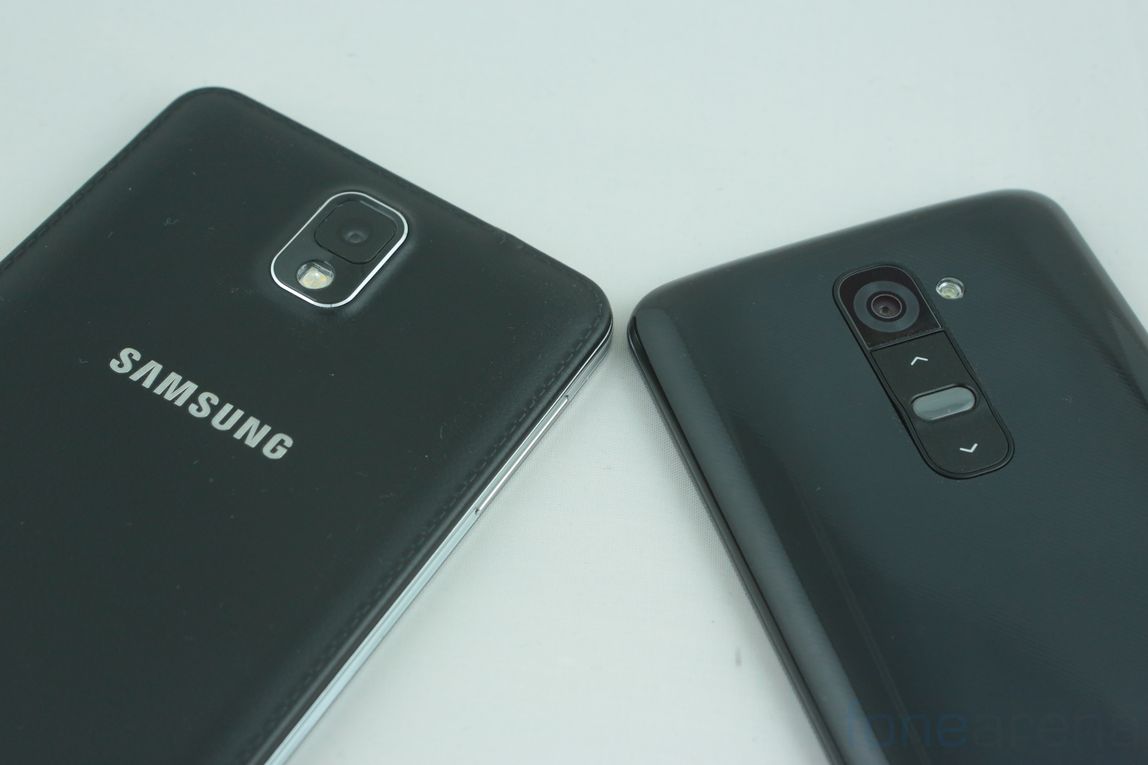 In terms of camera UI, both the phones are quite different. Samsung Galaxy Note 3 has a camera app similar to the one on Galaxy S4 and Galaxy S4 Zoom and comes with a variety of shooting modes like Surround Shot, Golf Mode, HDR, Panorama, Best face, Best photo, Sports Mode, Eraser Mode, Animated Photo, Drama Mode and Sound&Shot mode. LG G2 comes with similar modes, but under different names. The UI of LG may look different, but is largely similar to the one on Galaxy Note 3 except in terms of the colors used. 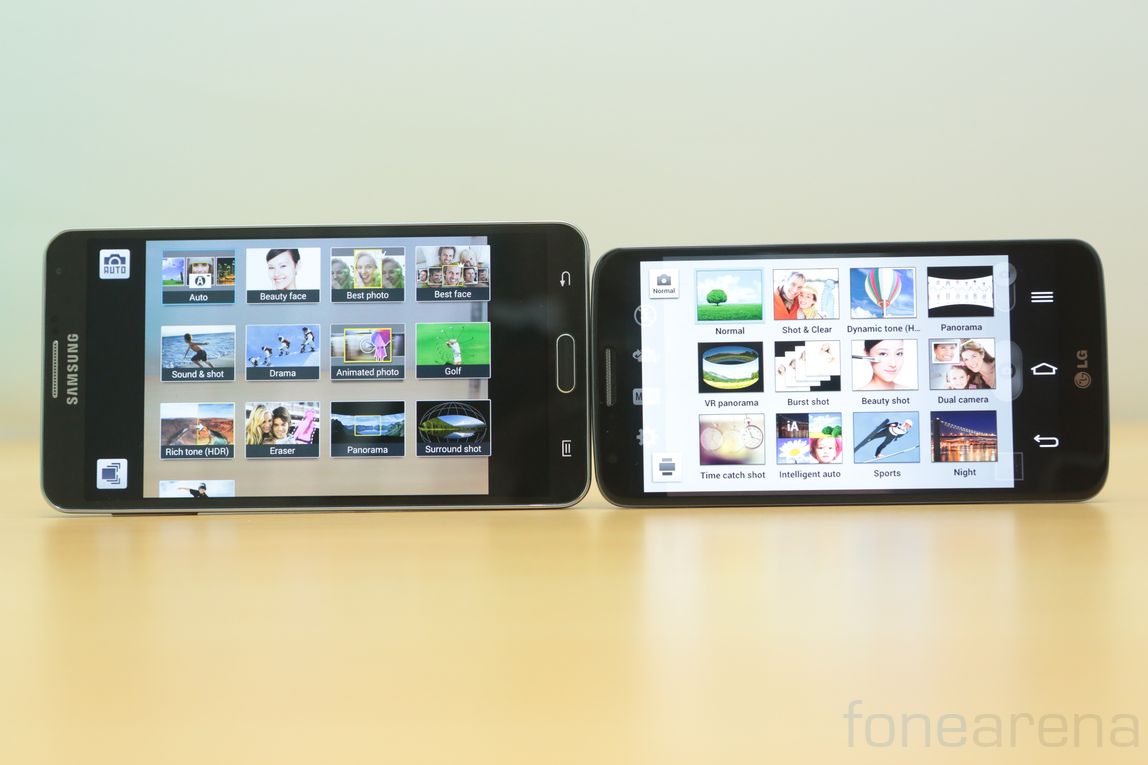 The image quality is quite similar on both the phones, but videos come out better on the LG G2 because of OIS. You can check out the demo of OIS in LG G2 right below.

You can check out the camera comparison video between the two devices right below.

Galaxy Note 3 runs on Android 4.3 Jellybean and is overlaid by TouchWiz UI. It is packed with Samsung features like Smart Stay, Smart Rotation, S-Beam, Multi-windows, Airview, Pop-out videos, Air Gesture, Smart Scroll, Smart Pause and Reading mode that optimizes the screen for reading and is available when certain applications like Google Books are opened. The main distinguishing feature of the Note 3 is its S-Pen stylus that lets you perform a lot of creative functions. It is a great tool for note taking and Note 3 features a new S-Note app. There is also an Action Command option pops up allowing the users to access basic S-Pen functionalities with the click of a button on the S-Pen. LG G2 comes with features like Q-Slide apps that let you use miniature version of apps like browser, phone dialer. 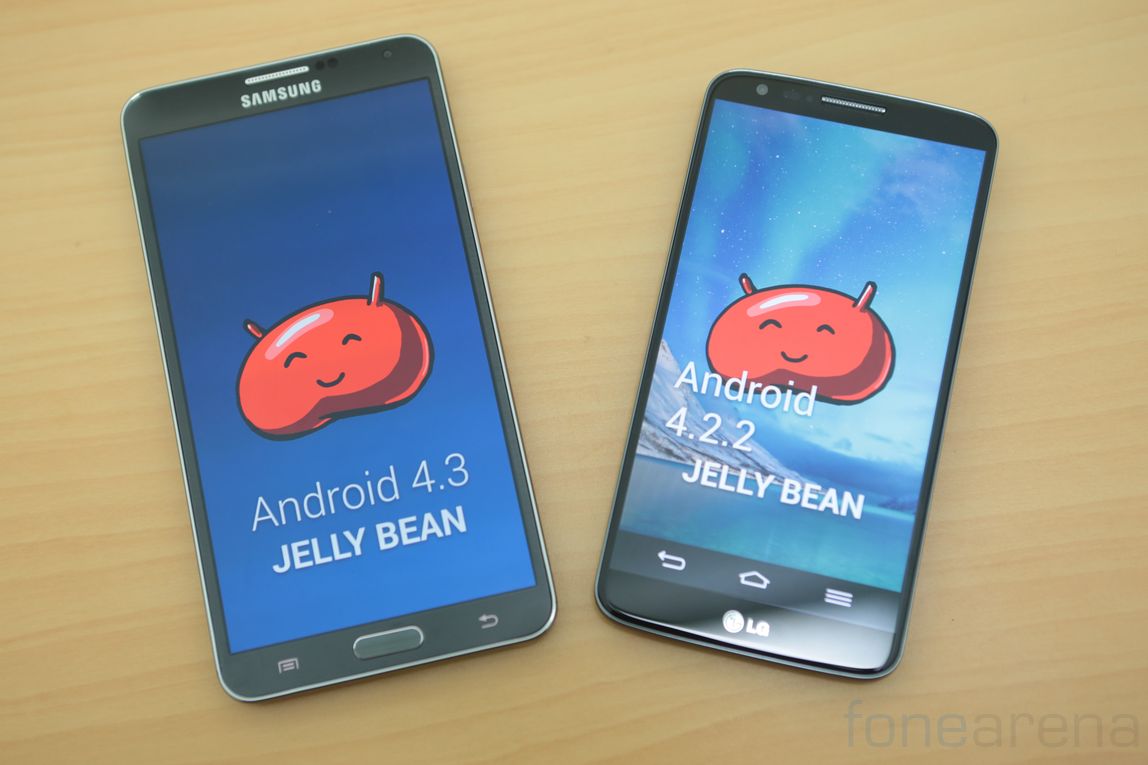 Samsung Galaxy Note 3 has a premium set of software features and they work quite together with the new enhanced S-Pen functionality. As soon as you take out the S-Pen, an Air-command menu appears on the screen(this can be opened by pressing the button on the S-Pen as well) and it lets you one of the five actions – Action Memo, Scrap Booker, Screen Write, S-Finder and Pen Window. Action Memo lets you take notes and use these notes based on their content, Scrap Booker lets you save content from the screen, Screen Write lets you write on the screen, S-Finder helps you find files within your device and Pen Window is the best of all that lets you create a window of any size on the screen and fits certain apps inside it. It can be great for multi-tasking. You can check out the software features of Galaxy Note 3 in the video below.

LG G2 has its own set of software features that may not be as rich as Samsung, but definitely it gets the job done. LG G2 has an option in the notification bar called as Q-Slide apps which are miniature version of certain applications that can be opened on the screen. These applications appear above everything else on the display, but only two such Q-apps can be opened at a time. LG G2 also has Q-Memo app that lets you write on the screen and take notes. LG G2 also comes with a special feature called as Knock On feature that allows the users to unlock the phone just by tapping twice on the display. You can check out the LG G2 Knock On feature video right below. 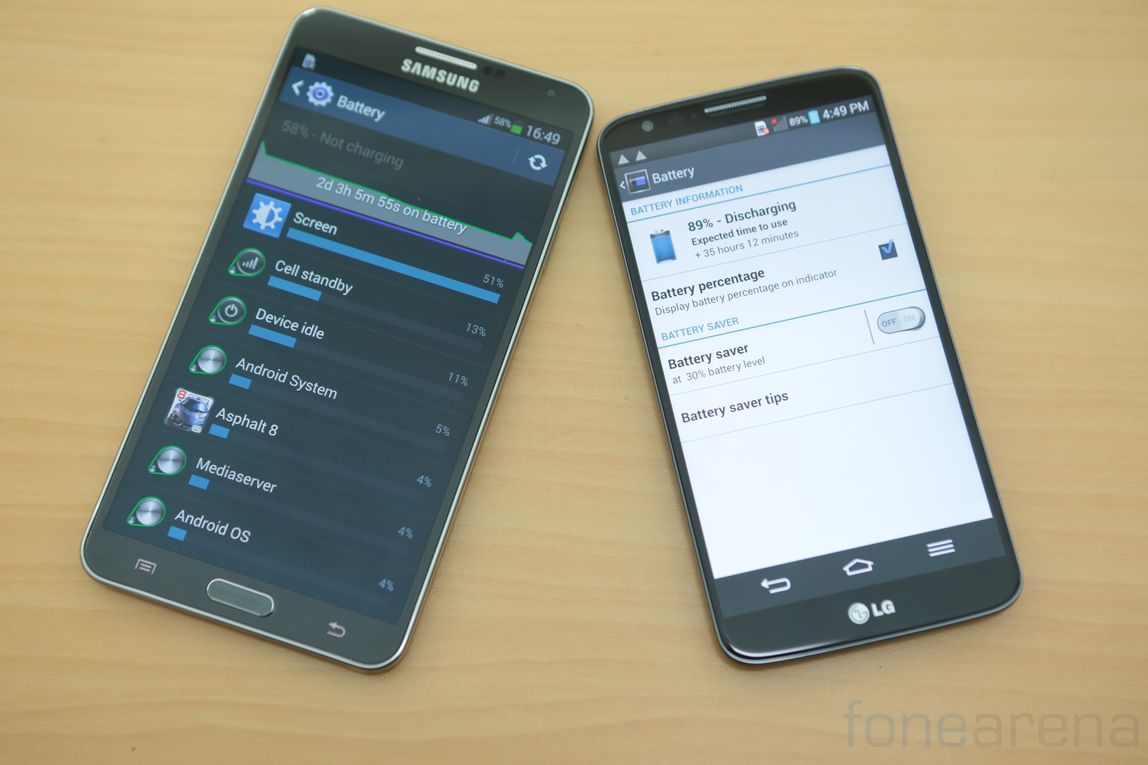 In terms of connectivity, both the devices are equipped with features like WiFi (802.11 b/g/n/ac, Bluetooth, 3G, NFC, DLNA, WiFi Direct and microUSB(MHL) connectivity. Samsung Galaxy Note 3 is the first device to come with USB 3.0 port which supports better speeds. You can check out the USB 3.0 demo video right below.

Samsung Galaxy Note 3 is one of Samsung’s two flagships and excels in almost all the parts. LG G2 is LG’s lone flagship now and it certainly is quite capable, but is slightly let down because of its software. When it comes to choosing between the two phones, the software features of Galaxy Note 3 makes it a compelling choice, but the LG G2’s compact build gives it an edge. Currently, Samsung Galaxy Note 3 retails for Rs. 46,900 while LG G2 is available for Rs. 37,999(16GB variant). 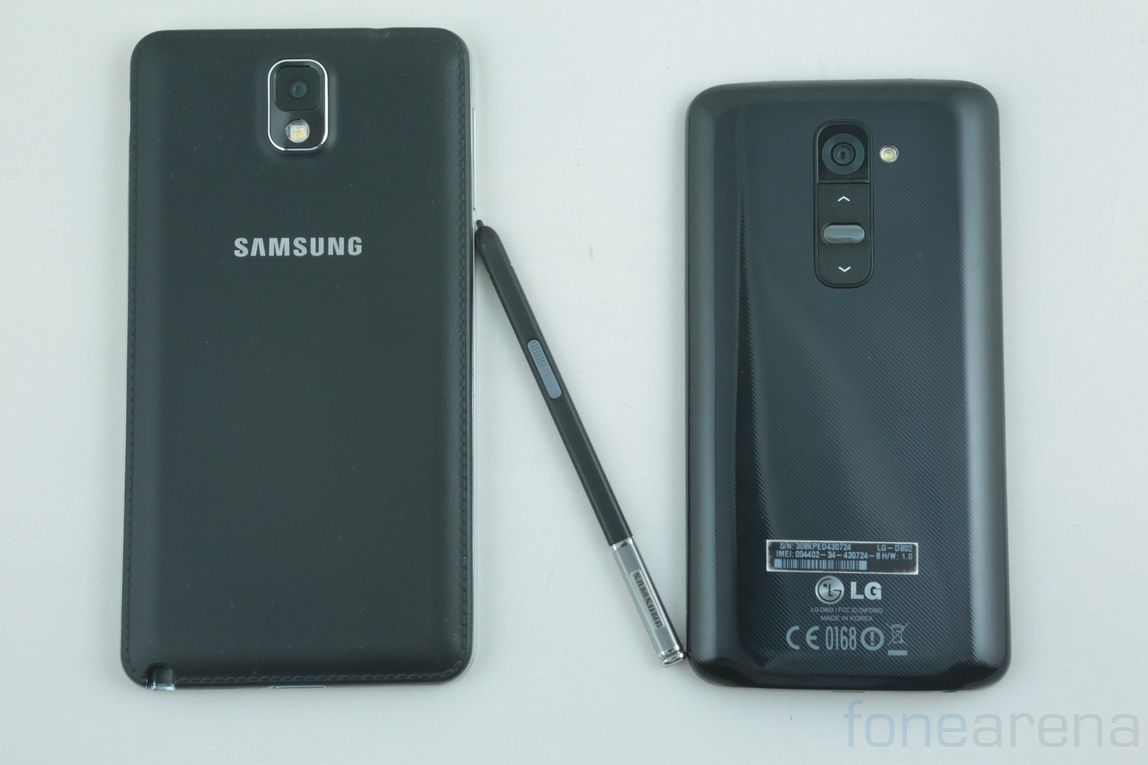