Today we have the Samsung’s current flagship, the Galaxy S4 and LG’s first phablet – Optimus G Pro. Samsung’s Galaxy S4 was announced in March and has been available in the market since April while the G Pro was announced in February, but has been available in the market only since July. Both the devices pack powerful processors under their Full HD display. The Galaxy S4’s more fierce competitor is the newly launched LG G2 and we will be bringing you that comparison pretty soon. 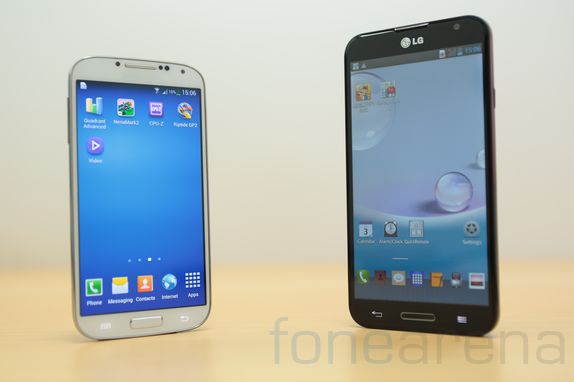 Now lets check out how the Galaxy S4 and Optimus G Pro compete against each other.

Samsung Galaxy S4 is not much different from its predecessor in terms of design with the same all plastic build and similar design language. The Optimus G Pro, on the other hand, has a very solid build quality with glass front and textured glass back. Both the phones have curved edges which makes them easier to hold, but the Galaxy S4 has a plastic rim running across the device while the G Pro has a solid metal rim. 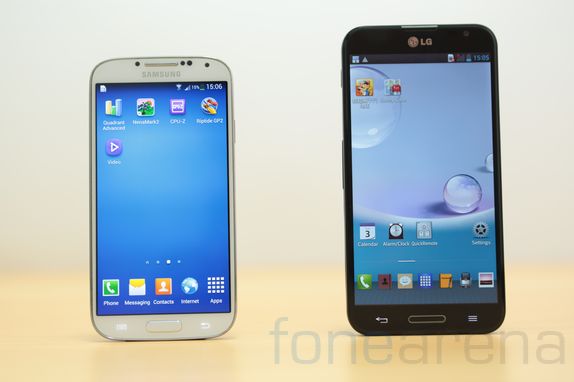 In terms of dimensions, the Optimus G Pro is taller, wider and thicker than the Galaxy S4. The Galaxy S4 weighs a mere 130g while the G Pro weighs 172g making it quite heavy. 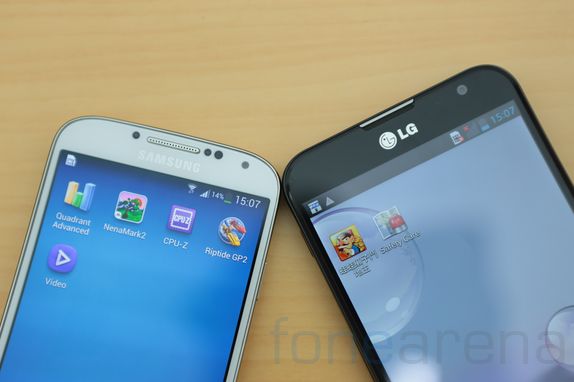 Below the display, we have a physical home button on both the devices flanked by capacitive touch keys on either side. On the G Pro, the home button is surrounded by a LED light. 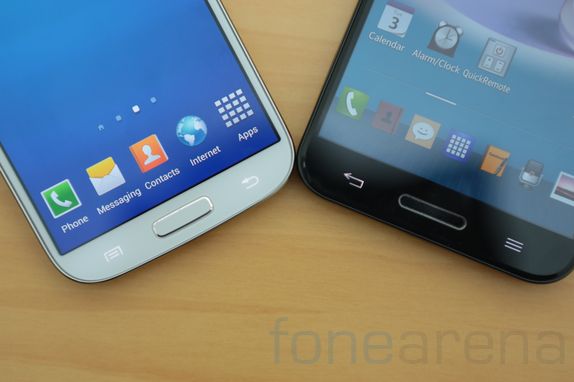 The arrangement of keys is quite similar with only the power lock key on the right side of both the phone. 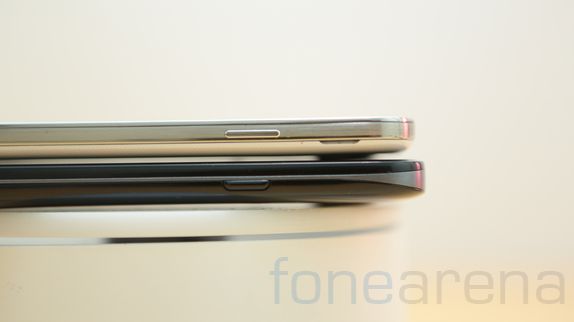 On the bottom, we have a microUSB port and microphone. 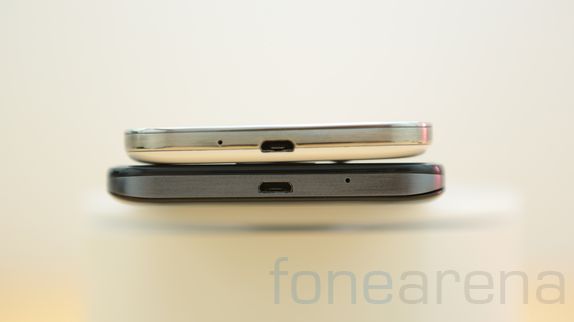 On the left side, we have a volume rocker on both the phones although there is an extra Q-slide key on the G Pro which is customizable for various uses. 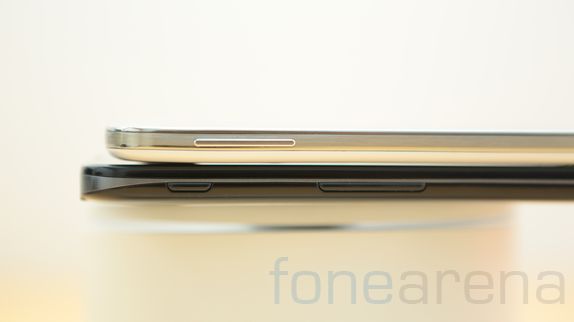 On the top we have a 3.5mm audio jack, IR blaster and secondary microphone on both the devices. 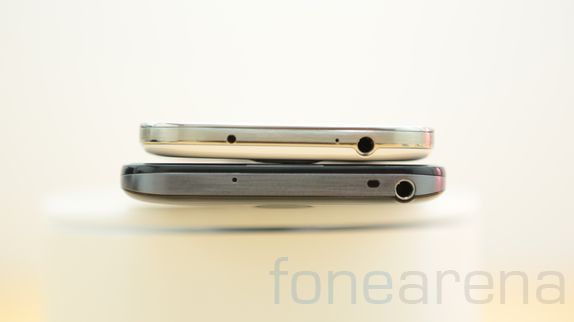 The keys are made of brushed aluminum on the Galaxy S4, while they are made of plastic on the G Pro. The keys on the S4 are well accessible and offer better feedback when compared to G Pro. 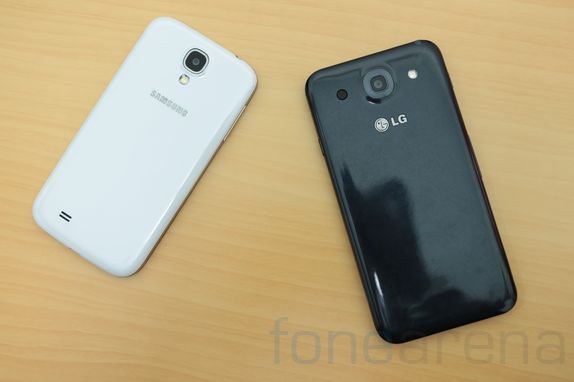 The back cover is removable on both the phones. Removing the back case, we find the battery compartment. 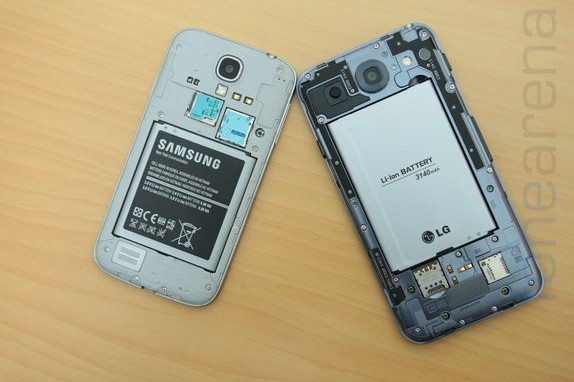 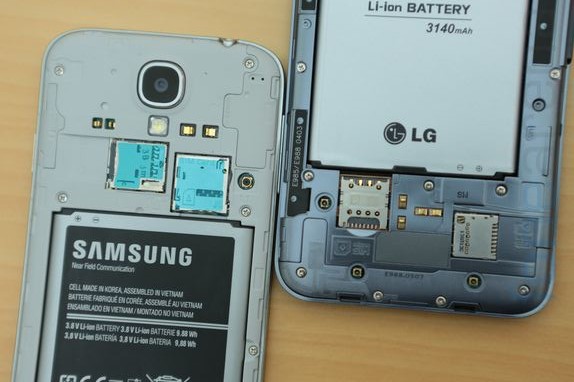 Overall, the Galaxy S4 is nothing new in terms of design with the same Samsung design and all plastic build, but is quite handy and fits perfectly into the hand and is very light. The Optimus G Pro is solidly built, but is on the heavier side. 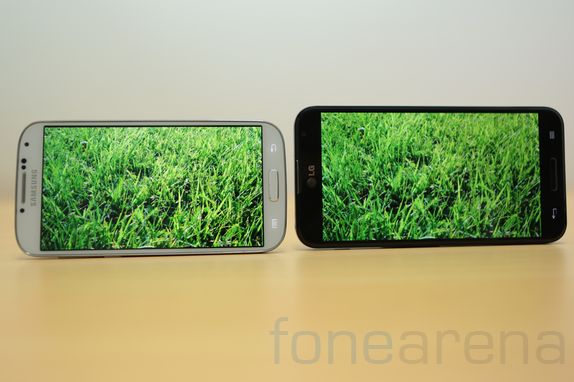 In terms of brightness, both the displays were good, but the one on the Galaxy S4 seemed brighter. In terms of color saturation and contrast, the Galaxy S4 was quite good, but being a SuperAMOLED display, it was over-saturated. Both the displays had excellent viewing angles. Whites were good on the G Pro while blacks were darker on the S4. Images were more crisp on the S4 because of the higher pixel density

Overall, we liked the display on the Galaxy S4.

Samsung Galaxy S4 is one of the first devices to be powered by an octa-core processor and it features Samsung’s own Exynos 5410 , has 2GB RAM and graphics is taken care by PowerSGX544MP3 GPU while the Optimus G Pro is powered by a 1.7 GHz QuadCore Snapdragon 600 SoC, has 2GB RAM and Adreno 320 GPU. Despite the octa-core tag, the Galaxy S4 has two quad-core processors which work one at time depending on the load. 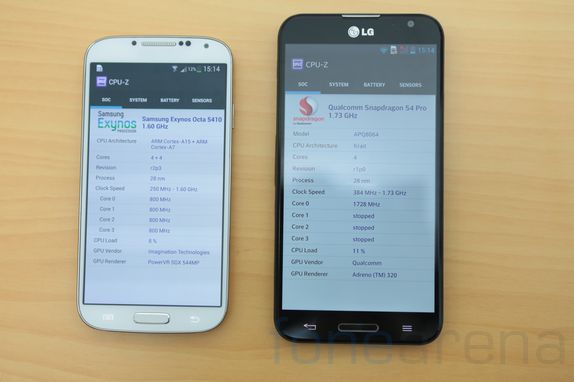 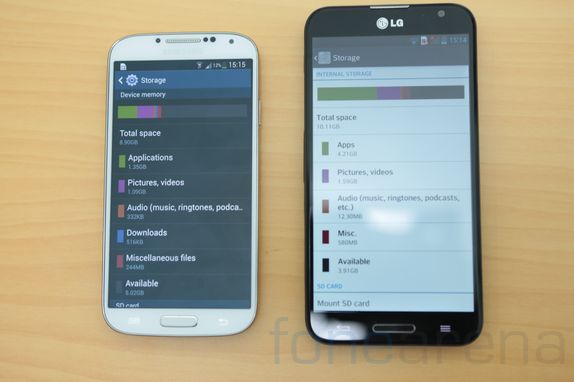 Out of the 2GB RAM, both the phones have 1.8GB usable RAM and have 1.2GB free when the devices are idle.

Both the phones are extremely snappy in day-to-day tasks. Opening apps and switching between them is equally fast on both the phones.

In benchmarks, the Galaxy S4 beat the G Pro in most of the benchmarks while G Pro beat the S4 in a couple of benchmarks. 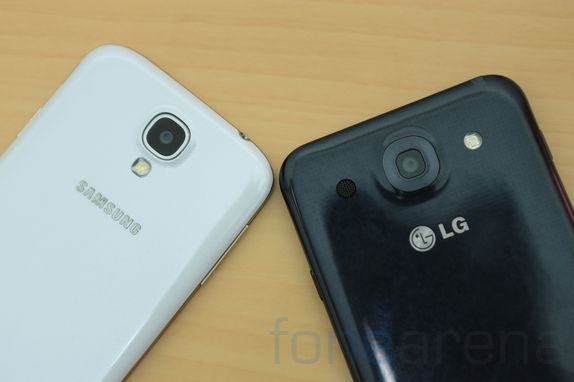 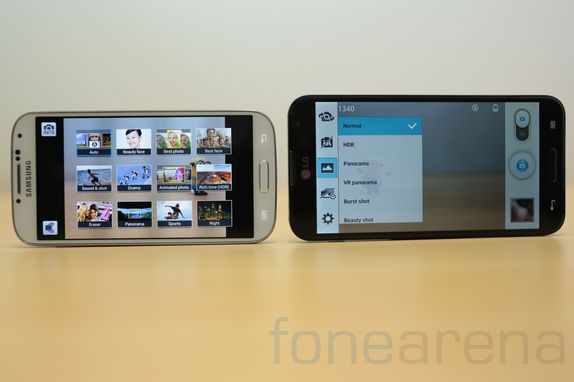 In terms of image clarity, the images and videos of Galaxy S4 were just slightly better with less noise, more details and better contrast and saturation. You can check out the video below to know more about the camera quality of both the devices.

Samsung Galaxy S4 runs on a more recent version of Android – 4.2.2 Jellybean while the G Pro runs on Android 4.1.2 Jellybean. Samsung’s TouchWiz not only adds eye-candy with UI, but has a ton of features that includes Multi-window, S-Beam, Air-view, Air Gesture, Smart Stay, Smart scroll, smart pause and pop-up videos. LG comes with Q-apps that are similar to Sony’s small apps, but can be used only two at a time. There is also a note-taking app from LG which reminds us of Note 2’s S-Note app. LG has a Q-slide key on the left side of the phone which can be configured to open any Q-apps or other apps directly. 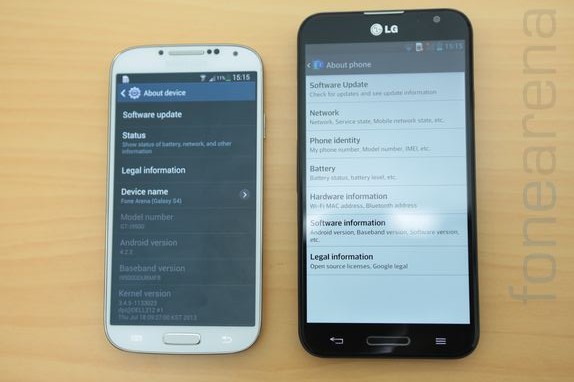 In terms of software, Samsung Galaxy S4 is definitely ahead with lots of features and customizations.

The Samsung Galaxy S4 has a 2600mAh battery while the Optimus G Pro has a 3140mAh battery. In terms of battery life, the one on the G Pro is better.

In terms of connectivity, both the devices are equipped with features like WiFi(802.11 b/g/n/ac, Bluetooth, 3G, NFC, WiFi Direct, DLNA, USB OTG and microUSB(MHL) connectivity. 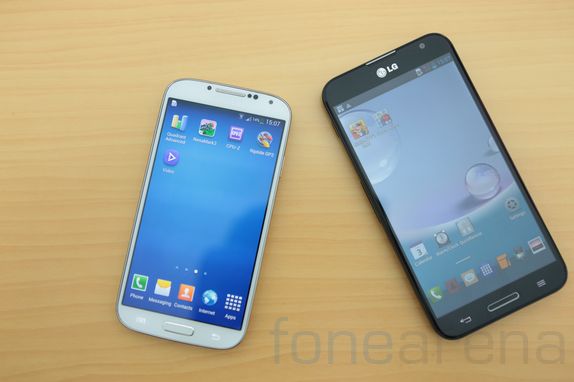