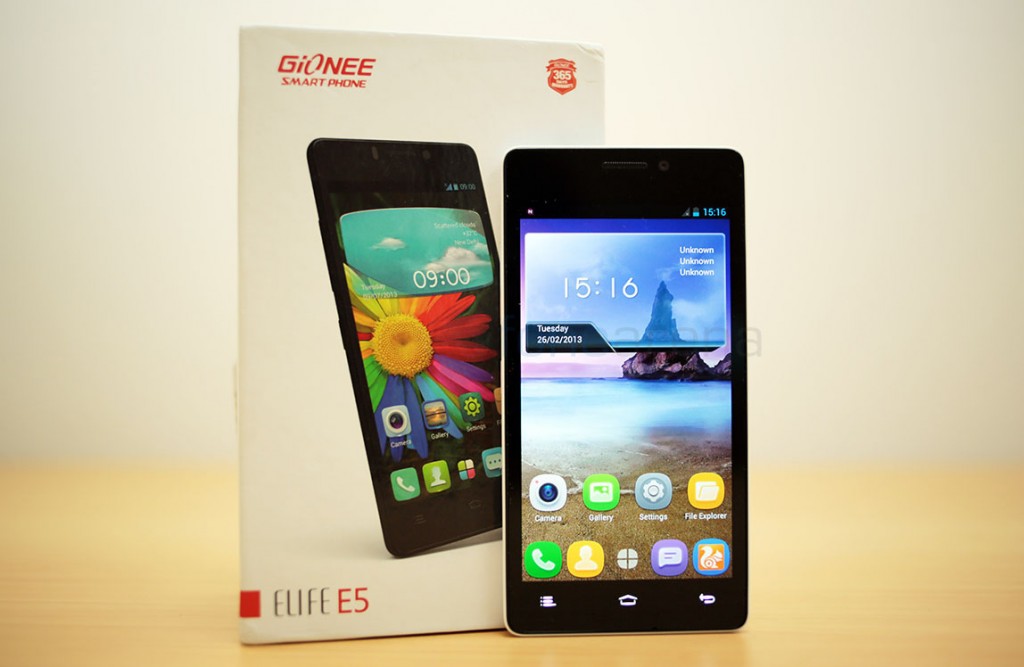 The trend in today’s Indian market is cheap Android Smartphones. Many companies like Micromax and Karbonn have successfully built huge businesses over this specific concept, however there are always compromises to be made. Most devices that land in the Indian market are re branded low cost Smartphones from across the border in China. Shenzen is a hub of countless number of companies that are mainly contract manufacturers and often end up offering really low cost, and thereby low quality phones. But some of them really stand out, like Meizu, Xiaomi, Oppo and the new entrant in our list of impressive Chinese companies – Gionee. The Elife E5 has inspired us to think beyond and acknowledge the fact that excellent phone makers exist, irrespective of the market they are from.

We unboxed the Elife E5, one of the company’s recent releases in the Elife range, and found it really nice. Here is a video of us talking about the box contents and the device itself, go past the break for our complete impressions.

These are the high quality box contents that accompany the device – 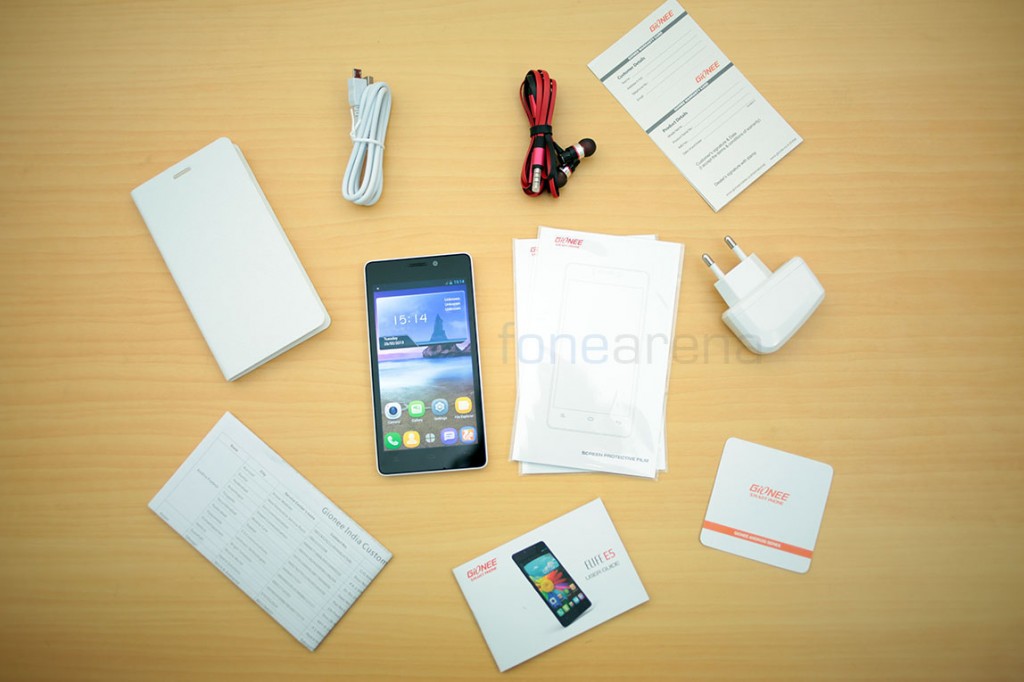 Every item inside the Gionee Elife E5’s box screams high quality. This is unprecedented levels of awesome because it is usually the high end phones or just the really top tier companies that give this treatment. You might have seen us getting impressed with the Canvas 4’s box contents and this invokes similar reactions. It was also very nice of Gionee to bundle a flip cover, the no. 1 accessory a buyer gets after purchasing a big screened phone, and of course a set of scratch guard, which fetches more priority than a flip cover. Also handy is the list of local service centers in India, which is also seen as a move to make the consumer trust a not-so-well-known company in India.

Lets talk about the device now. 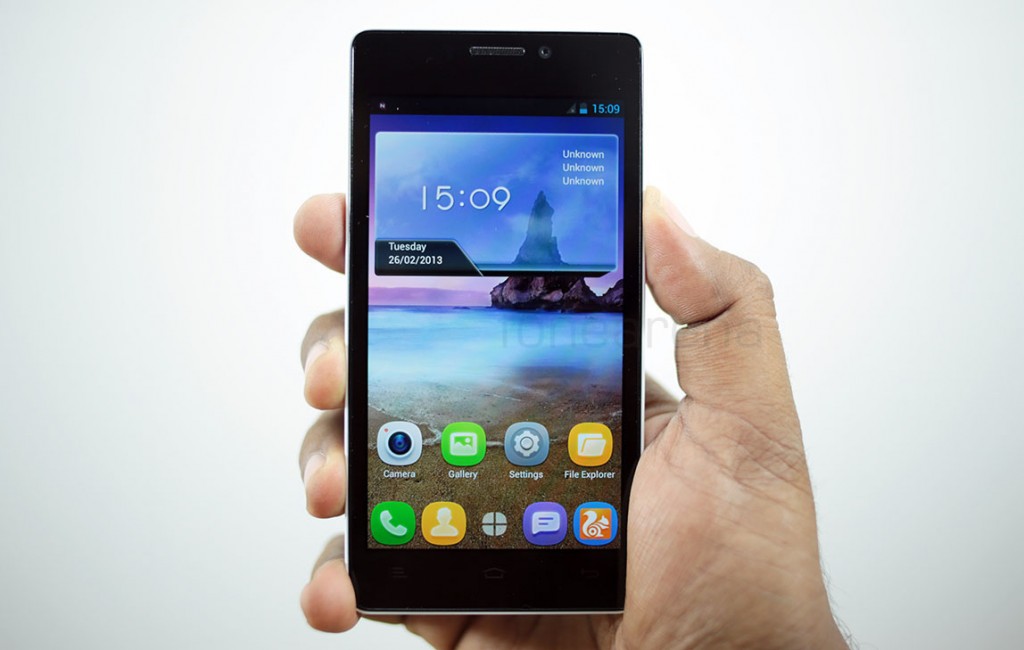 The Elife E5 is a part of the new range of phones powered by the MediaTek MT6589T. The massively successful Mt6589 has been slightly upgraded for support with 1080p screens and better clock speed and naturally better performance. The Elife E5 though continues sporting a 720p IPS LCD screen instead of a 1080p, which might actually help a lot in terms of performance. Needless to say, the display is really good, and the main reason behind is the fact that it is a Samsung made 4.8 inch 720p Super AMOLED HD screen. Yes, the same as the one on the Galaxy SIII. 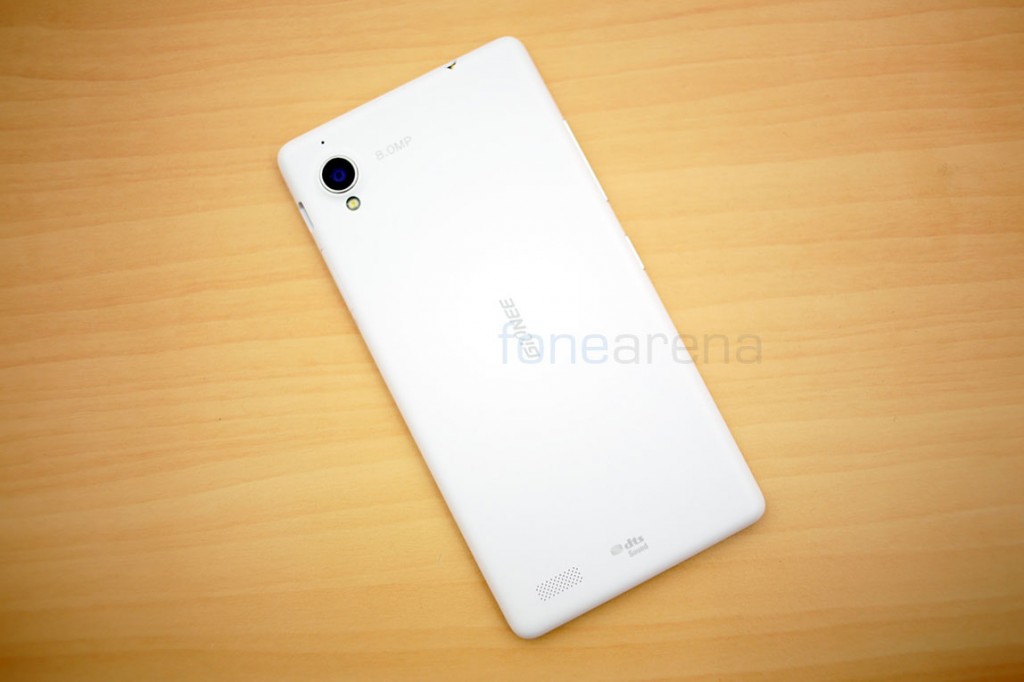 If you thought the display was good, the build quality is even better. Made of superbly high quality plastic, the extremely thin body makes the device a pleasure to hold. It is really in a class of its own in terms of feel and quality. Rounded corners and curved edges might be the standard fare in smartphones these days, but the quality and the slim implementation makes the Elife E5 stand out. It is really THAT good.

The software on the other hand is just normal though, nothing new or exciting here. The interface has been skinned, but very minimal. The widgets, icons and some features of the launcher are the only ones tinkered with, and there is always an option to go stock by the way of themes. The 8 megapixel camera on the back is flanked by a single LED flash and a secondary microphone for stereo audio recording. We were not able to test the camera yet but think we will have nice things to say about it later. Overall, the Elife E5’s first impressions are very good, we love the device. But the long term tests are where we get actual results, so stay tuned to our blog for all the upcoming coverage regarding the Elife E5, and oh, did you know we push out videos on our YouTube channel BEFORE it hits the blog? Yes, all you have to do is subscribe so that you get content way faster than the blog or even other blogs, what are you waiting for?

More pictures of the box contents –