Samsung’s dominance in the smartphone market is well-known, but the South Korean electronics giant is yet to stamp its authority on the Tablet market. Apple was the company that brought back tablets to life with their original iPad. 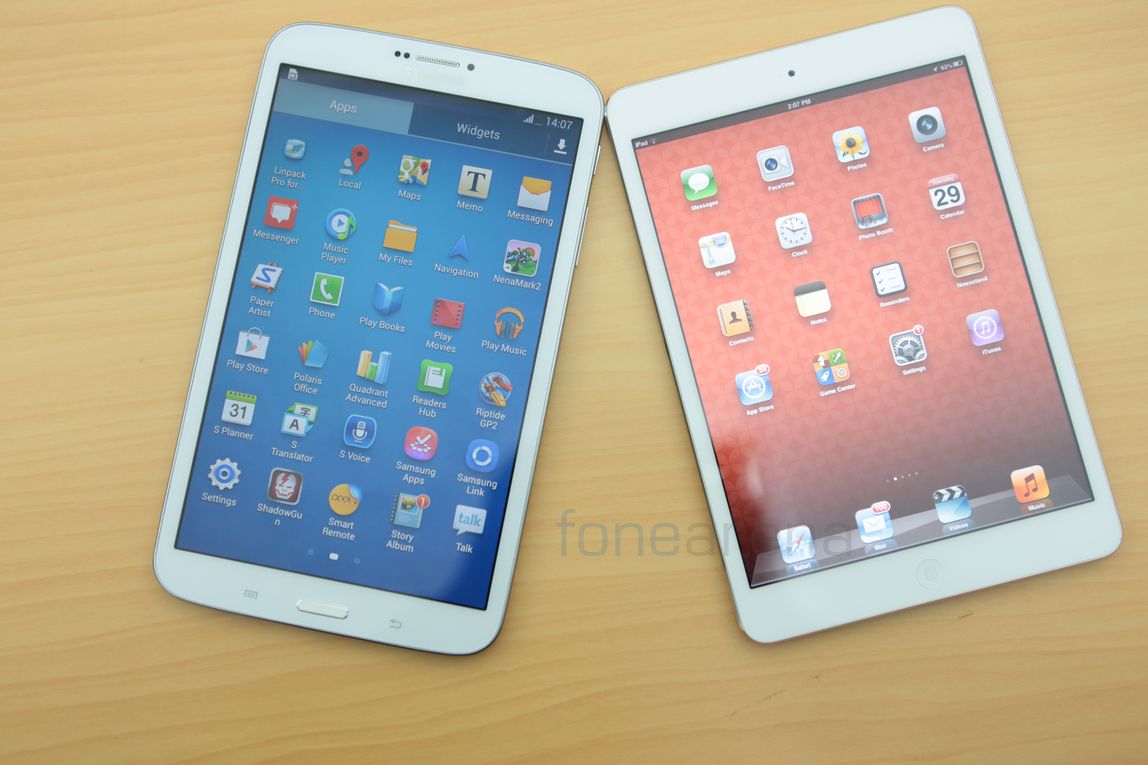 Both the tablets are worlds apart in terms of build quality, the software they run and the internals they feature. Lets check out how they perform.

The Samsung Galaxy Tab 3 follows the design language of the latest series of Galaxy phones with a full plastic build and a plastic rim running across the device. The iPad Mini on the other hand has a solid Aluminum build giving it a highly premium finish. 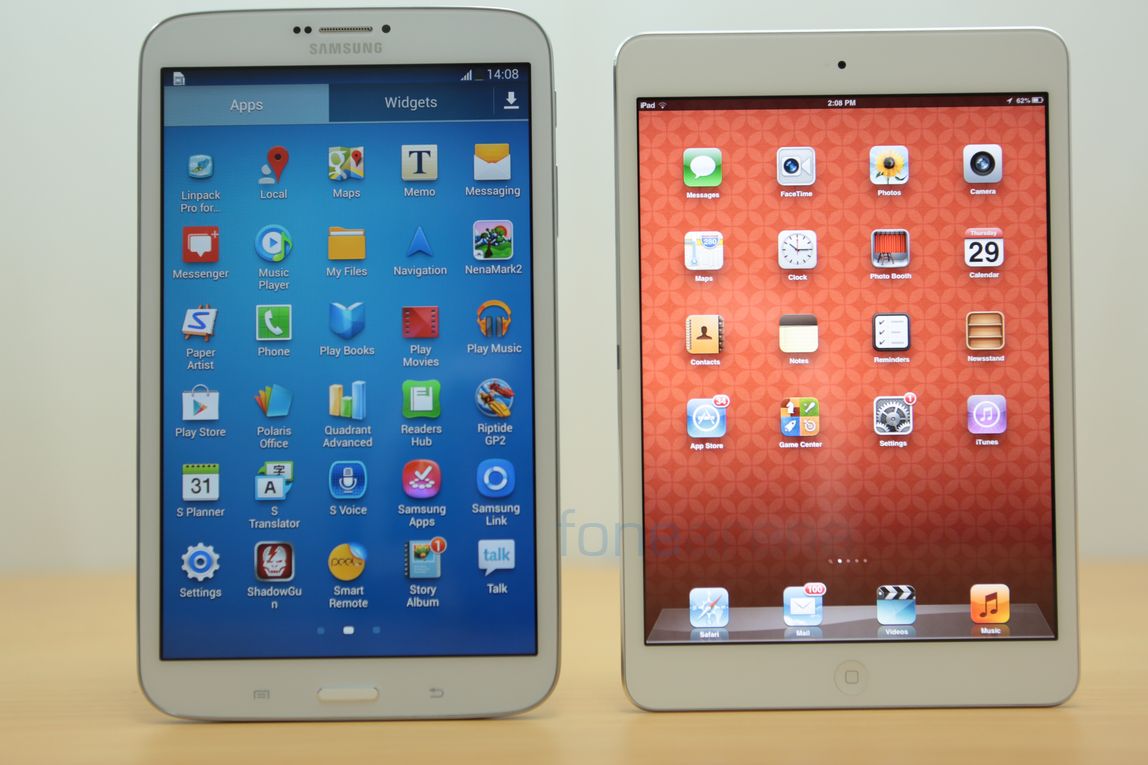 In terms of dimensions, both the tablets have almost sized screens, but the Galaxy Tab is taller while the iPad Mini is very wide. In terms of the weight, despite the aluminum build, the iPad Mini weighs just 312g which is 2g less than the 314g of Galaxy Tab 3.

On the front of the tablets, we have the display above which we have the earpiece with front camera on the right side of it and the ambient and proximity sensors on the left side of it on the Galaxy Tab 3. On the iPad Mini, we just have the front facing camera right at the center. 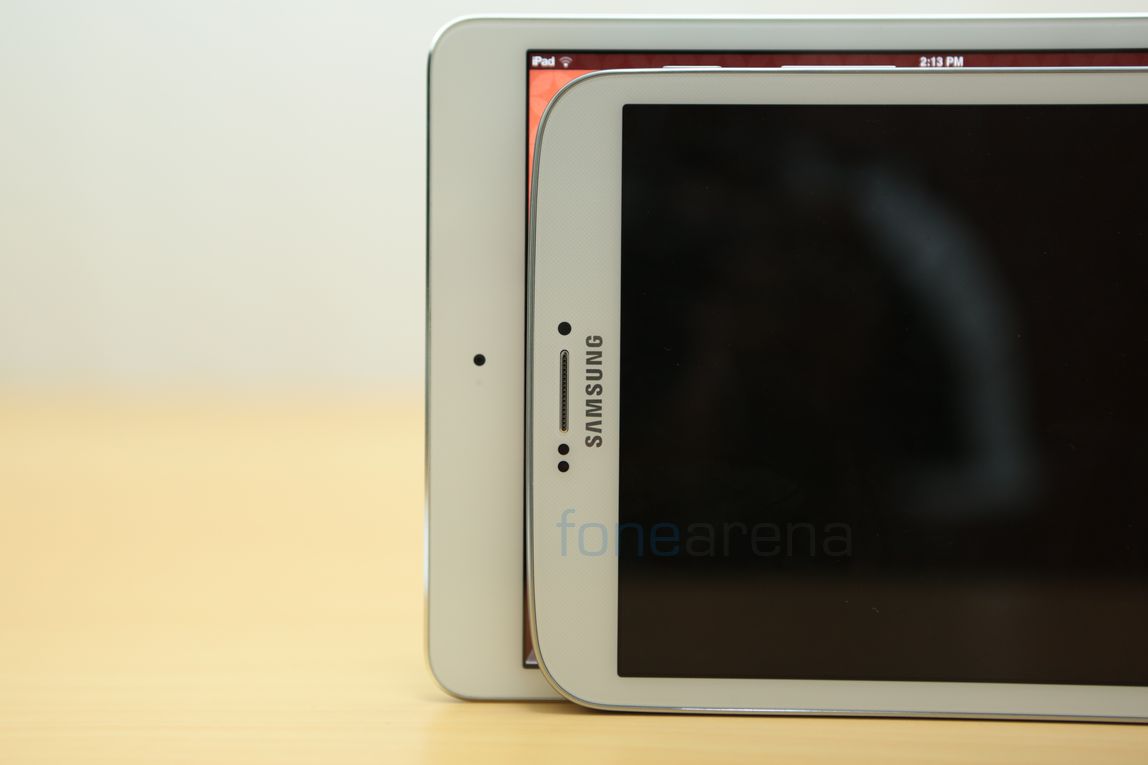 Below the display, we have a physical home button flanked by capacitive touch keys on either side on the Galaxy Tab 3. On the iPad Mini, we have the trademark Apple home button with no other keys. 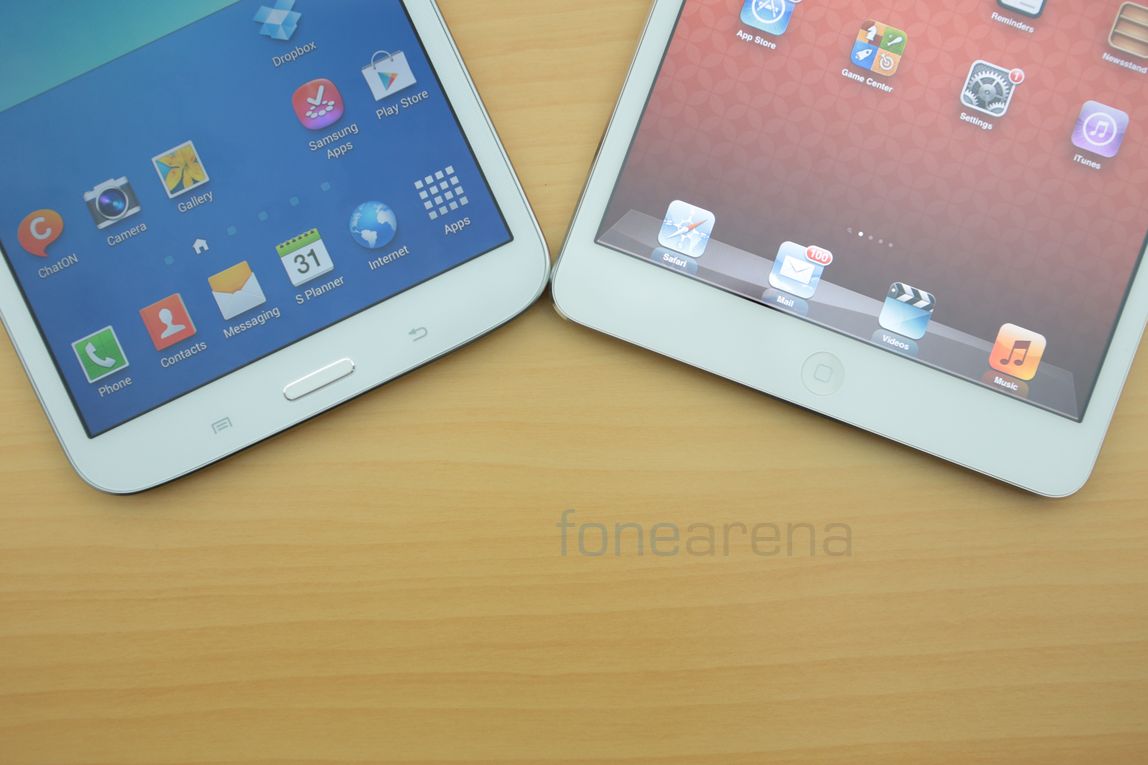 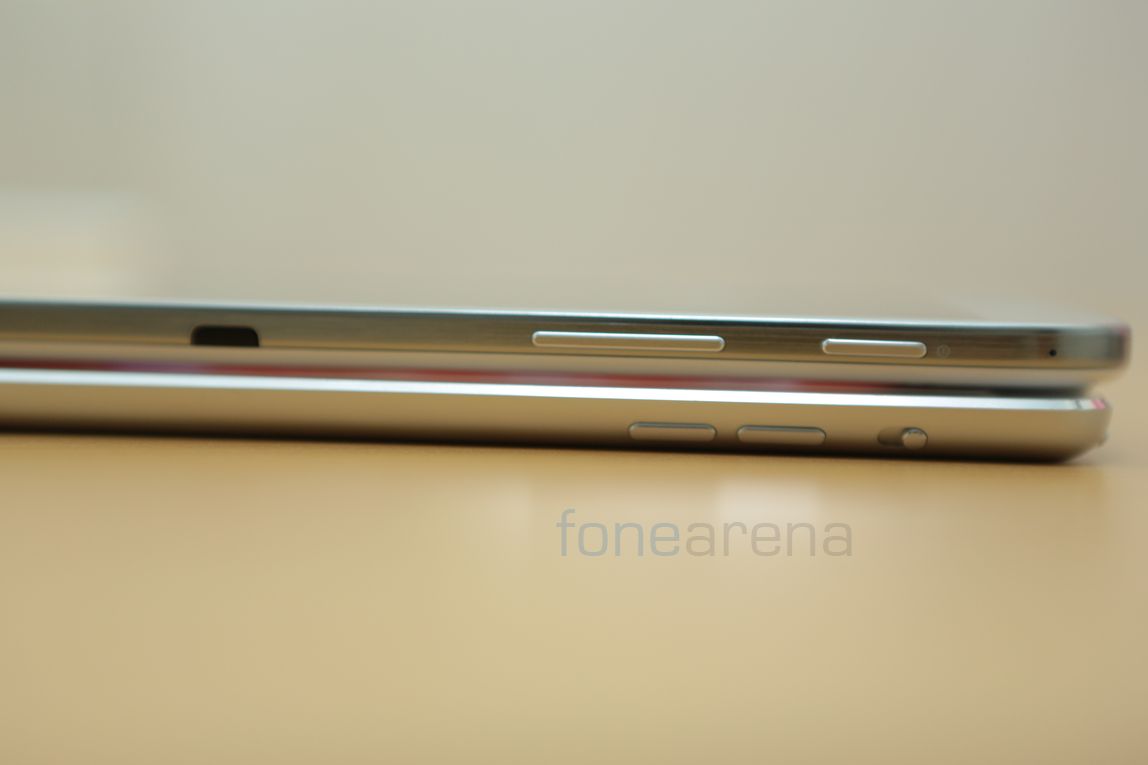 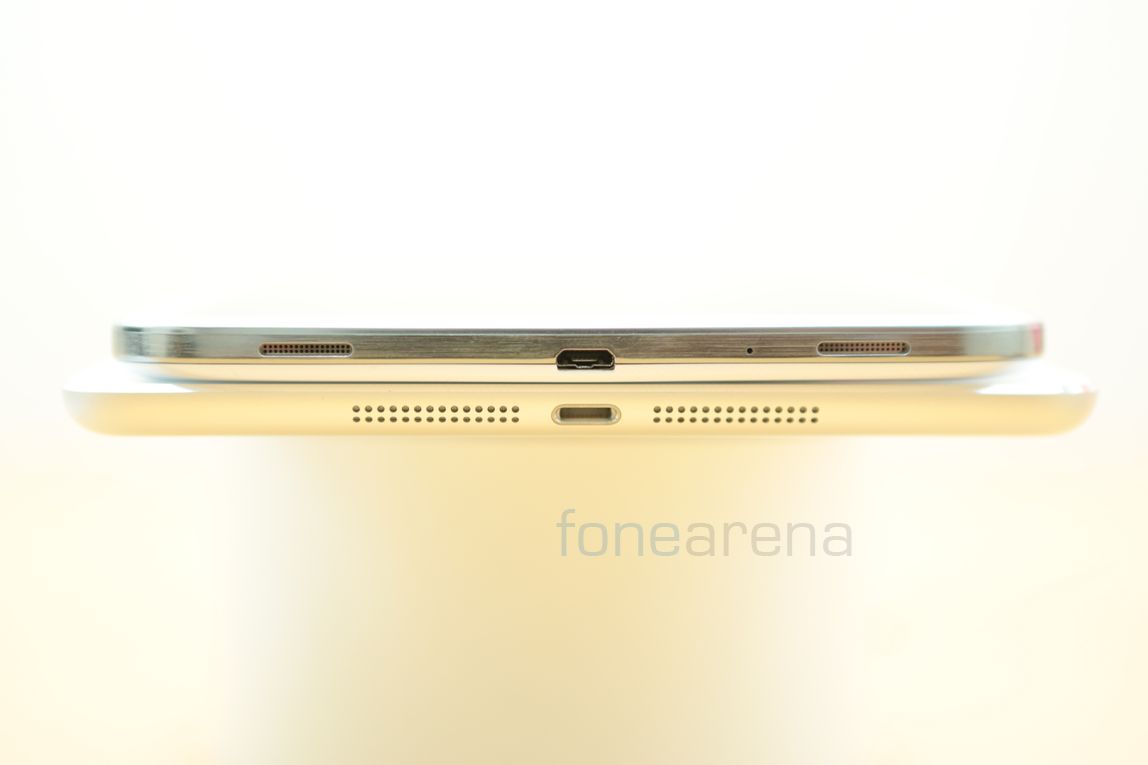 On the left side, we have the covered microSIM and microSD card slot on the Tab 3 while there is absolutely nothing on the iPad Mini. 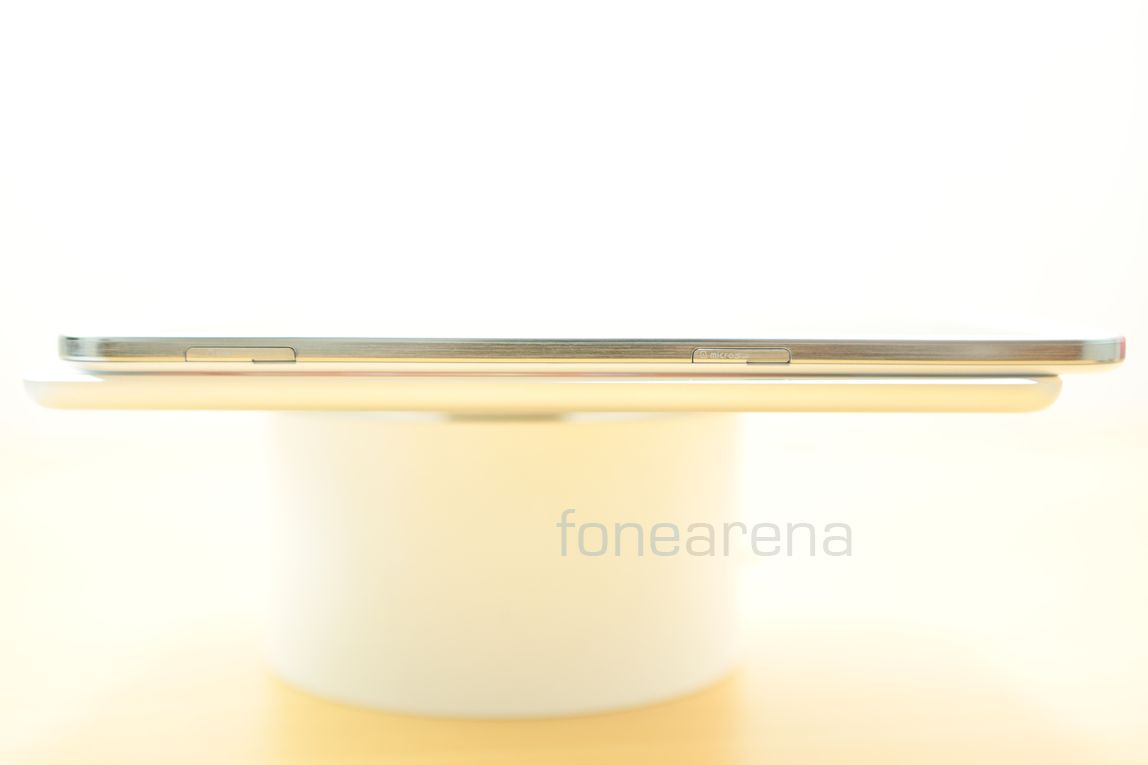 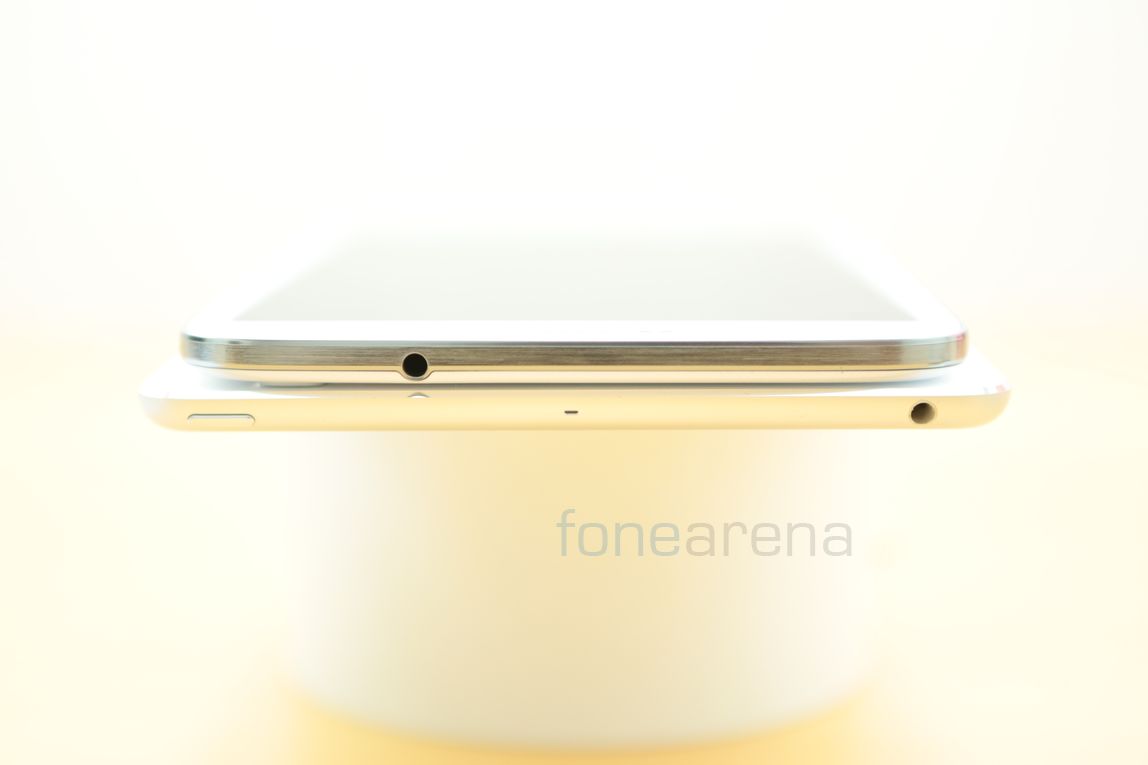 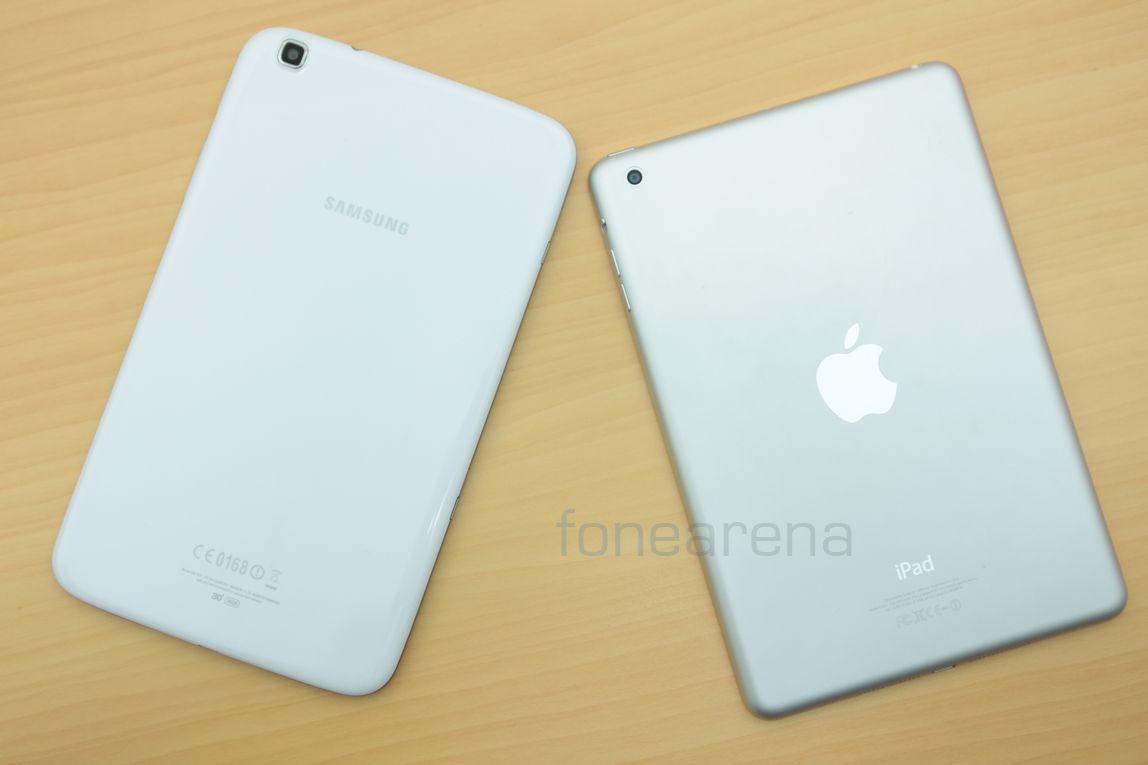 Overall, the Galaxy Tab 3 has a little worn out Samsung design, but its ergonomics make it fit well in the hand. The iPad mini, on the other hand, has a top quality premium finish and build quality making it quite sturdy. The iPad Mini is quite comfortable to hold and use. 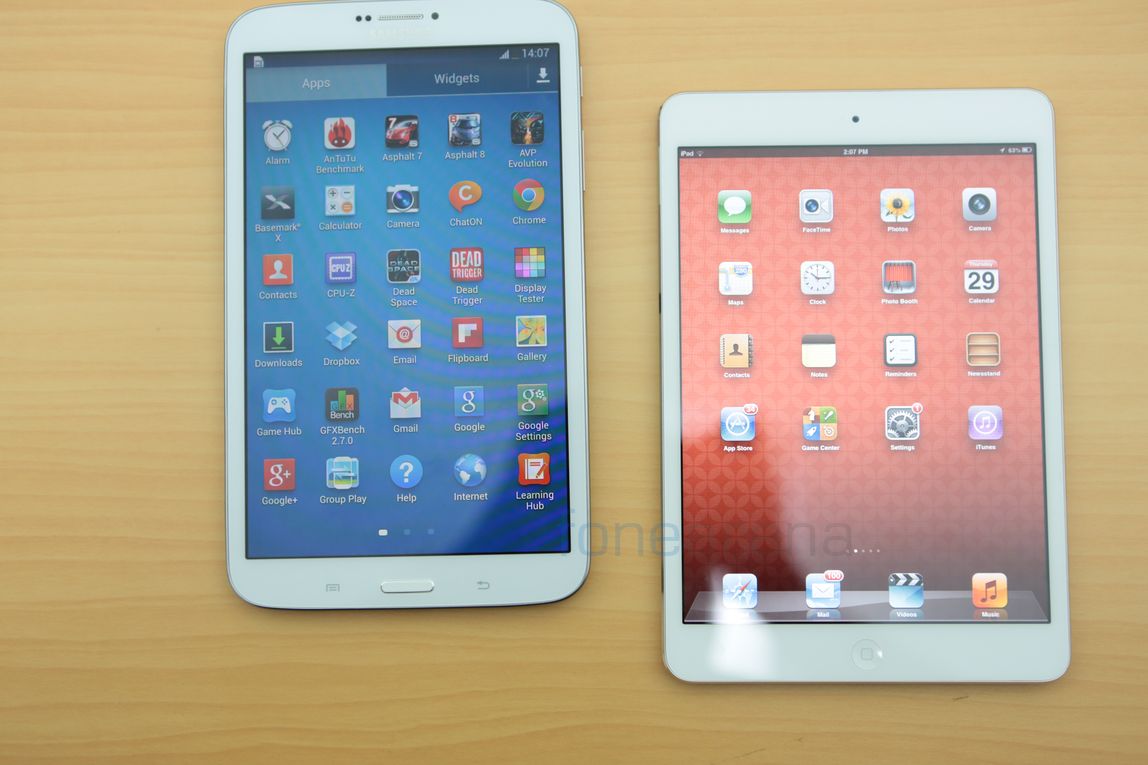 In terms of brightness and saturation, both the displays are neck to neck. The contrast is also quite similar although the Galaxy Tab 3 seemed slightly over saturated in terms of colors. But when it comes to sharpness, the iPad Mini is far behind because of the low pixel density.

Overall, we liked the display on the Galaxy Tab 3 because of its relative sharpness. 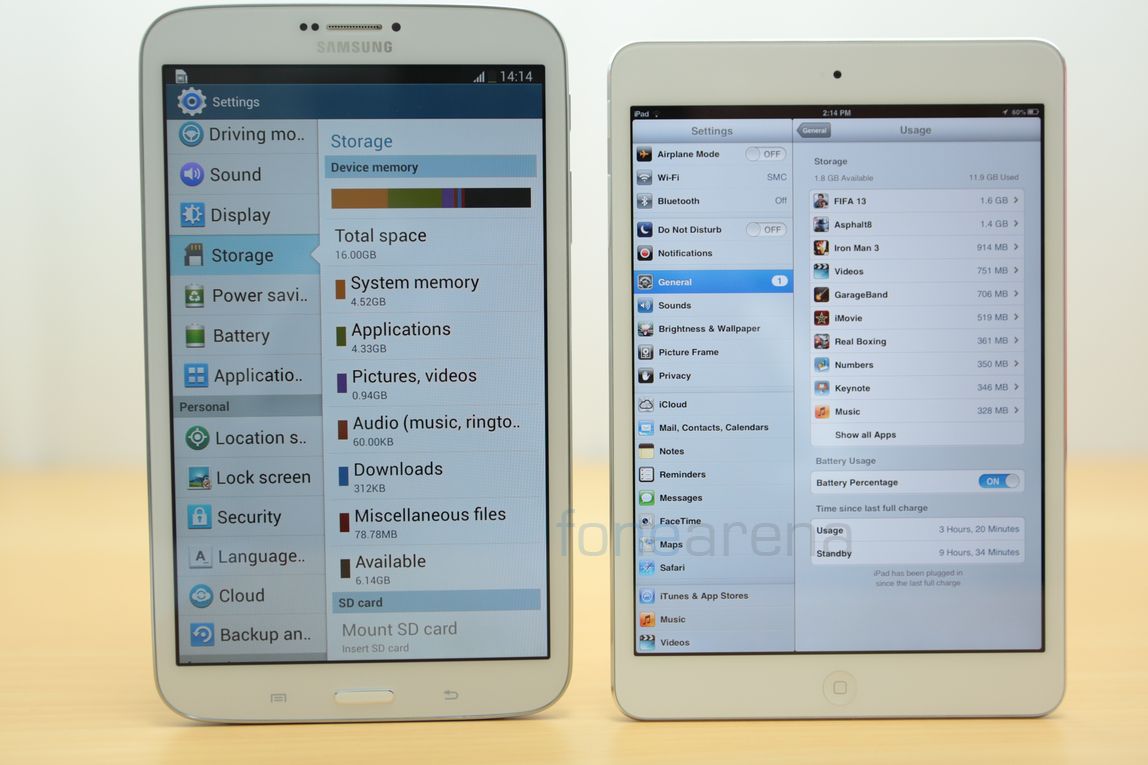 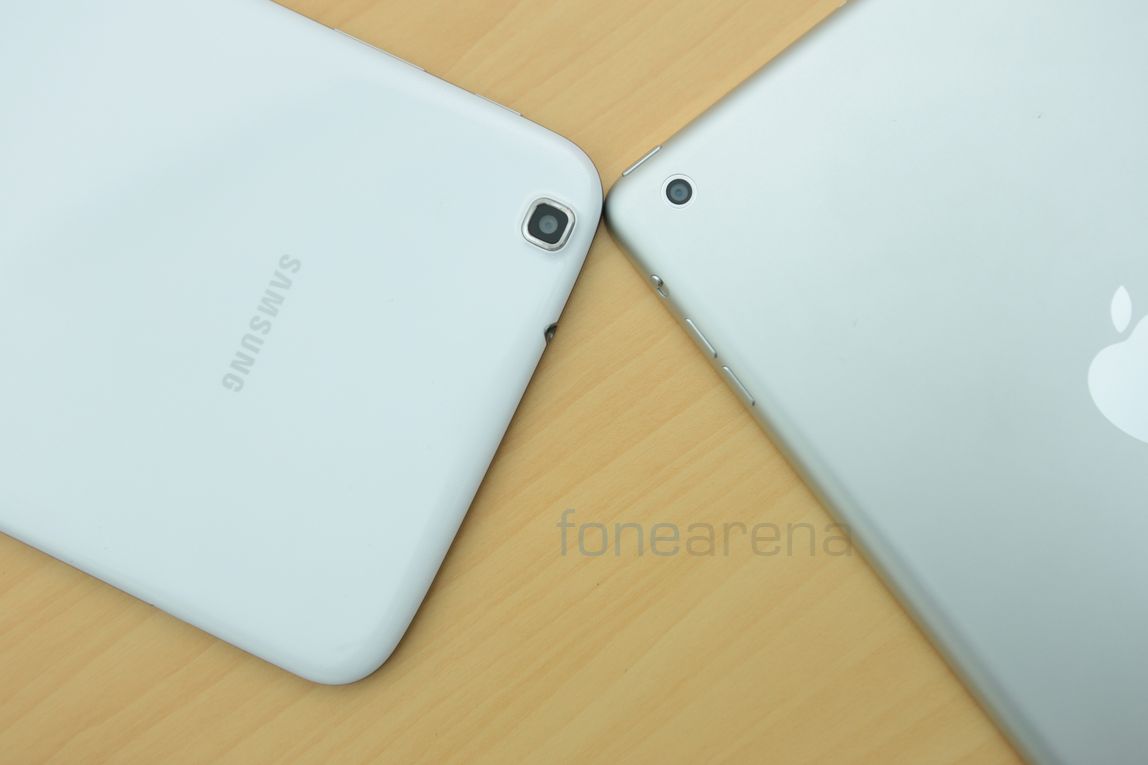 The camera UI is very different on both the devices. The camera app of Galaxy Tab 3 has a lot of options that lets you shoot in various modes like Beauty face, Night mode, panorama, sound shot and sport mode. Also, you can set various options like white balance, ISO, exposure and other things. On the iPad Mini, there is nothing to play with. Tapping the object to focus shifts the focus and adjusts the Exposure based on that. That is all you get with the iPad Mini. 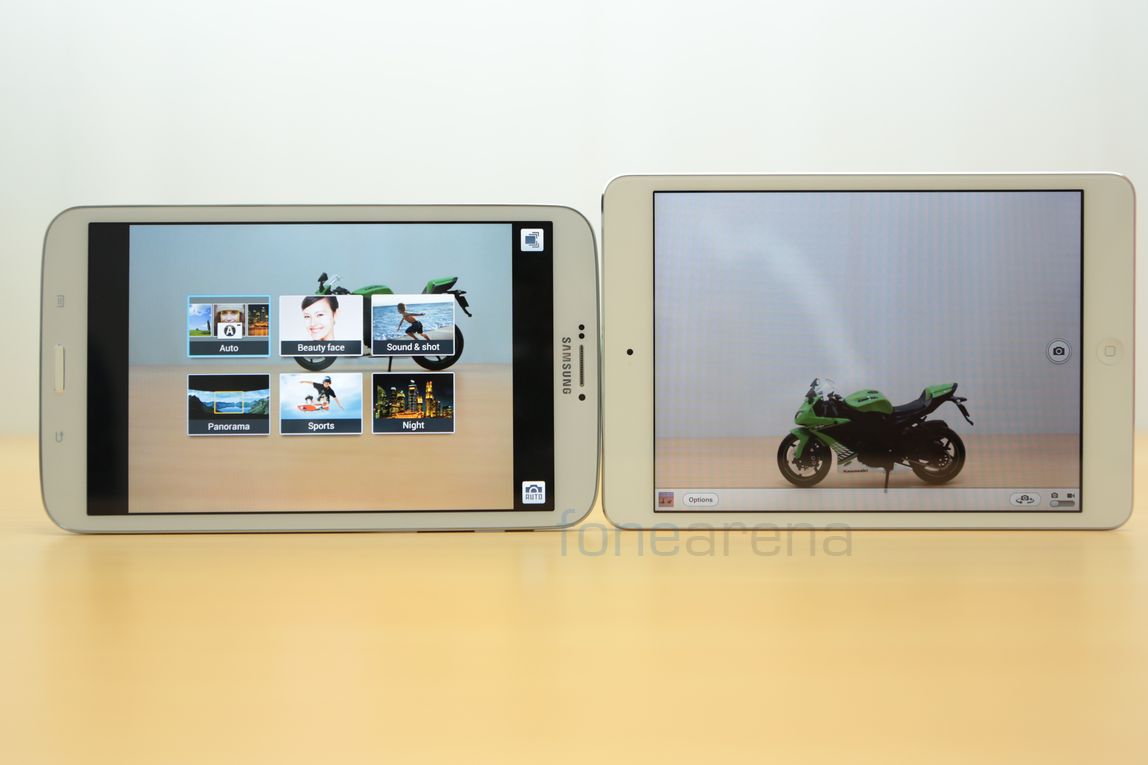 Software is where things get drastically different. The Galaxy Tab 3 runs on Android 4.2.2 Jellybean with Samsung’s TouchWiz UI on top of it. The iPad Mini runs on iOS 6 and is upgradable to iOS 7 when it is available. 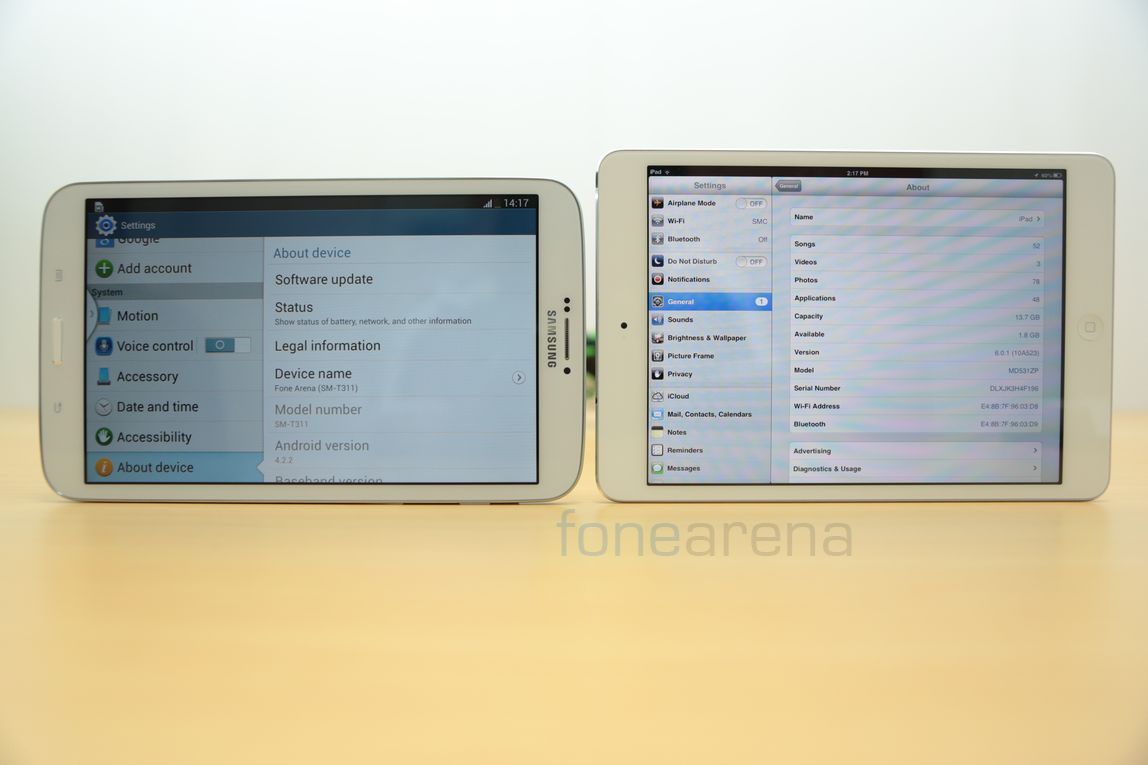 Both the software are very different. The Galaxy Tab has a lot of options that one can find in a typical Android tablet with notification bar allowing easy access to toggles which is not there in the iPad. The Galaxy Tab has an application drawer where all the applications available are found while it is absent in the iPad Mini. Multi-tasking is there in both Android and iOS which lets you switch between apps. Samsung’s Galaxy Tab has a lot of soft are goodies like Multi-Windows which lets you do two things at a time in either half of the screen. Any such customization is not present in iOS.

In terms of applications, the iOS store has a lot of tablet specific apps which is missing in the Android Play Store. A lot of apps are still exclusive to the App Store tablet market.

Overall, in terms of usability of software, the iPad Mini is very simple to use with little features. The Galaxy Tab has a ton of features, but is not the simplest to use.

Gaming is good on Galaxy Tab 3, but excellent on the iPad Mini. The biggest advantage for iOS is the computability of the apps. Almost all the games run quite smoothly on the iPad mini, but that is not the case with Galaxy Tab. There were some occasional glitches. 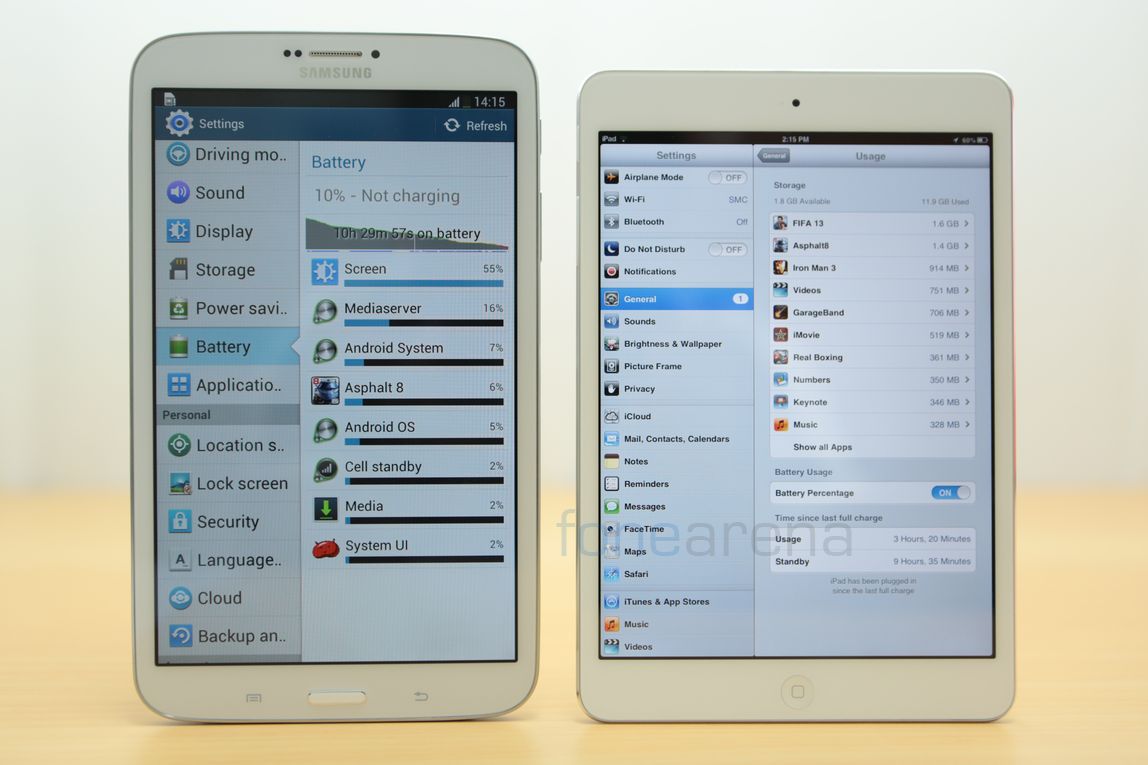 In terms of connectivity, both the devices are equipped with features like 3G,WiFi(802.11 b/g/n/ac) and Bluetooth; while features like NFC, WiFi Direct and microUSB(MHL) connectivity are exclusive to Galaxy Tab 3. 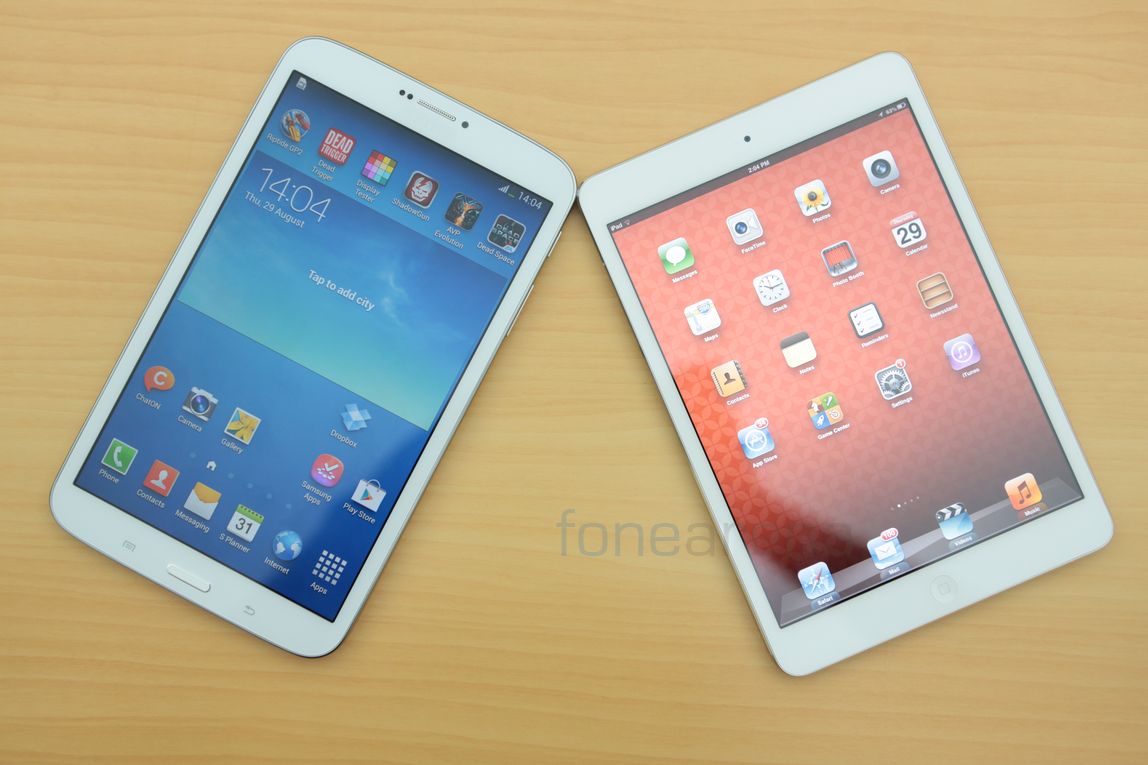 Samsung Galaxy Tab 3 is not a tablet with top of the shelf specifications, but is aimed at the budget minded and has good smartphone features for its pricing along with a big display. The iPad Mini is an Apple product and it comes at a relatively expensive price, but nothing on the iPad Mini has been compromised expect for its display.