Google just released this month’s breakdown of Android version’s accessing their Play Store. According to the reports, Android Jelly Bean 4.1 + is on the rise and now has a market share of 40.5% which is a 2.6% increase from last month’s 37.9%. With the launch of latest version of Android 4.3 Jelly Bean, the share of Jelly Bean is expected to increase further. 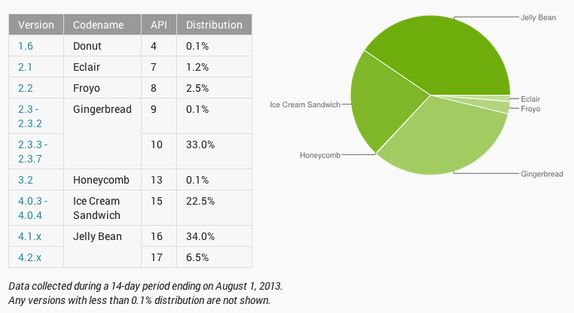 Gingerbread’s share has dropped from 34.1% in July to 33.1% in August. Android 4.0 (Ice Cream Sandwich) also had its share dropped from 23.3% in July to 22.5% in August. The drop in ICS and Gingerbread indicates a steady rise in Jelly Bean. It has been more than a year since Google has announced a major version of Android. Google announced Android 4.1 Jellybean last June and ever since, it has announced two versions Android 4.2 and Android 4.3, both of which are versions of Jelly Bean.

Android Key Lime Pie, the next major  has been rumored for a long time and one can only hope that it will be the next version of Google’s Android.