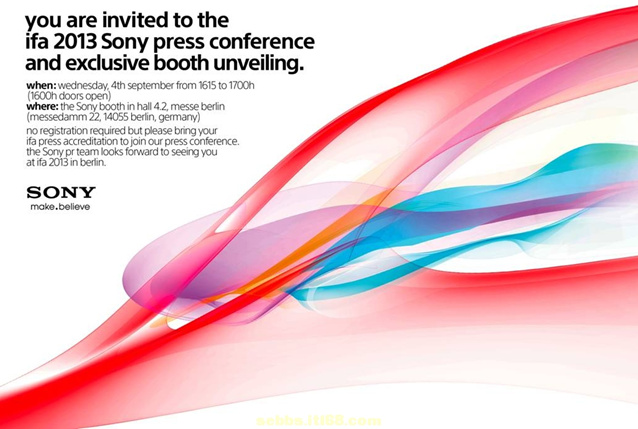 Sony has started sending out press invites for their press conference at  IFA 2013 scheduled for 4th September. It doesn’t leave any hint unlike the Germany or Paris invites where they showed off the Xperia Z Ultra which was unveiled at the Shanghai event ahead of these. Sony Xperia i1 Honami was expected to be announced at one of those events, but we did not see it.

Samsung is also expected to unveil the Note 3 at the IFA 2013 or few weeks ahead of IFA. So it would pretty interesting to see the two companies compete with their next flagship device. The phone is rumored to feature a  5.0-inch 1920×1080 Triluminos, OptiContrast, X-Reality Engine, powered by a 2.3 GHz Snapdragon 800 processor, 2GB RAM and 3000 mAh battery, but  the main highlight would be the 20MP camera with Mobile BIONZ Image processing. The is also expected to come with new software features and new Camera UI.