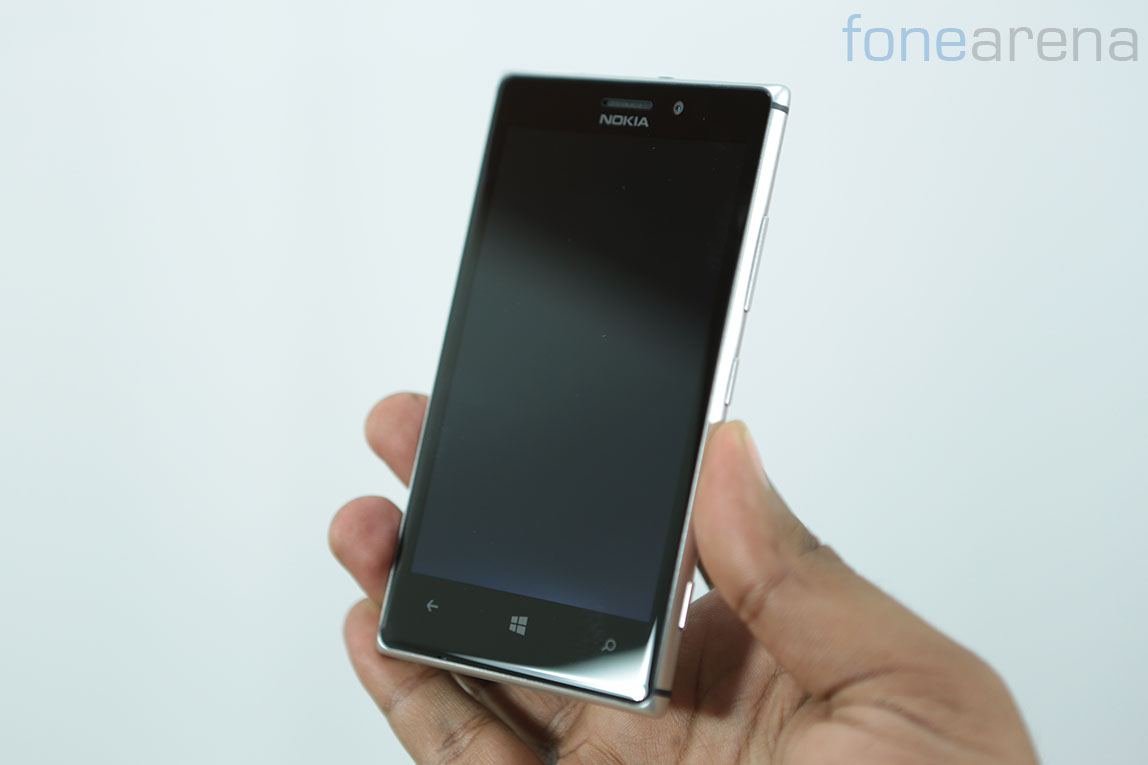 “Too fat and heavy” some shouted, and Nokia listened. The Nokia Lumia 925 fixes the two biggest complaints of then prospective Lumia 920 buyers, its thickness and weight. While the 925 does have some more features(or lack thereof) for differentiation, it was mostly like a hotfix patch for the Lumia 920. We had checked out the device earlier at the launch event in London. It looked a lot different and shied away from the colourful Lumia legacy with a more conservative look with Nokia having brought back aluminium into its fold again. But personally, not having had a personal hands on experience with the Lumia 925(unlike Varun) made me skeptical of the design, until now. Yes, the ritualistic unboxing shattered some pre-conceived notions of mine. We have thus documented the box contents and my initial impressions of the device in this video, watch – 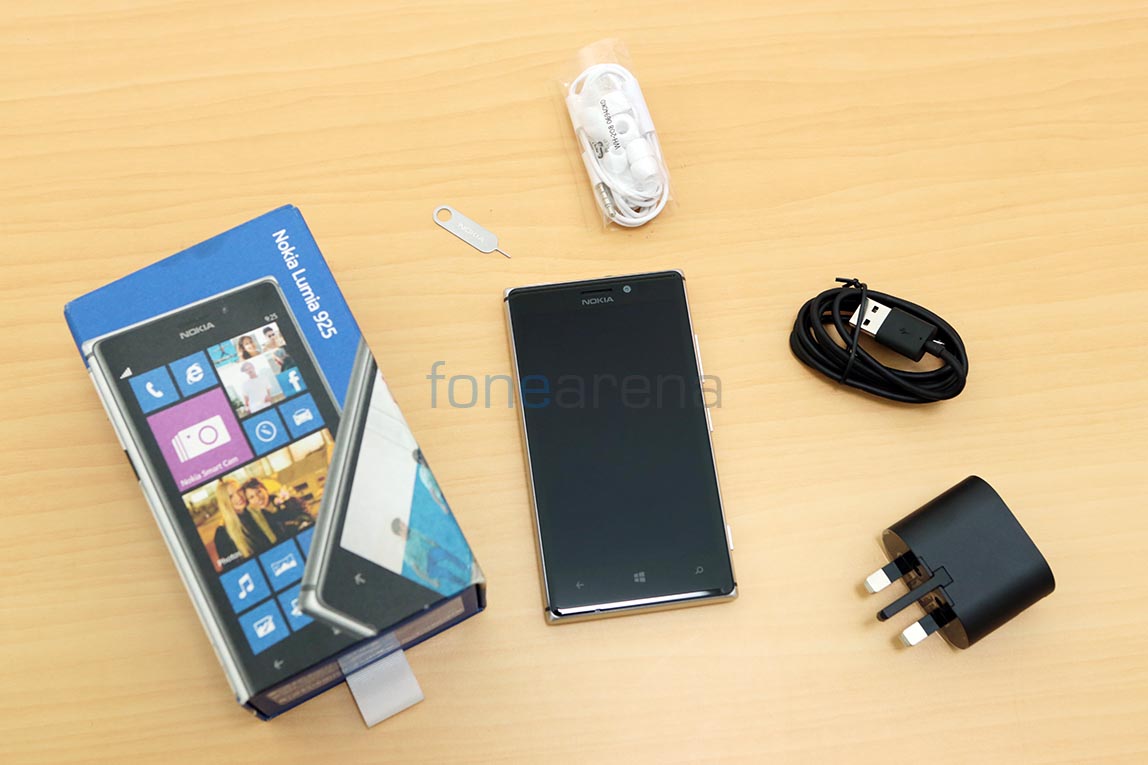 Pretty standard packaging from Nokia here, nothing special. Since we had the white version, the headphones alone in the package were white, we did wish the charger and the micro USB cable were white too, but hey, the Lumia 920 was similar, so they probably used the same. And here goes our detailed initial impressions of the Lumia 925.

First ever impression when I took the device out of the box was how thin and light the device felt. The fine print from Nokia’s websites tell us that the Lumia 925 is 8.5mm thick(volume thickness, Nokia notes) and weighs 139g, a far cry from the 185g weight of the Lumia 920. May be we are used to heavier devices, but the device felt really light, meaning it was most definitely not a dense solid feeling, it felt like the device was hollow or something, a feeling we could relate to our first experience with the iPhone 5. Numbers don’t lie, the iPhone 5 is a lot lighter in actual weight but it was very weird to feel a similar experience with the 139g heavy Lumia 925. May be it’s the surface area and equal weight distribution that did the trick.

While we didn’t mind the Lumia 920’s weight and thickness, it was frequently brought up as a flaw, and to every one who had a problem with those aspects of the 920, the 925 will be a delight to use, but at the expense of some functionality. Yes, the device loses its internal wireless charging abilities(in comparison to the 920), with three contact points that enable the device to sport a snap-on wireless charging shell just like the Lumia 720. And if you thought the colour scheme of the Lumia 920 was bland, the wireless charging shells that come in all kinds of Lumia colours will satisfy your need and fix that “hey it doesn’t look like a Lumia!” problem.

Most hardware aspects of the Lumia 925 are similar to the 920 with a few exceptions. The display, which is a 4.5″ AMOLED panel with a 1280×768 resolution is different from the LCD panel on the 920, but sports all the tech that the 920 came with, like super sensitivity, 60 Hz refresh rate etc. And at the same time, it helped Nokia in thinning the phone down. 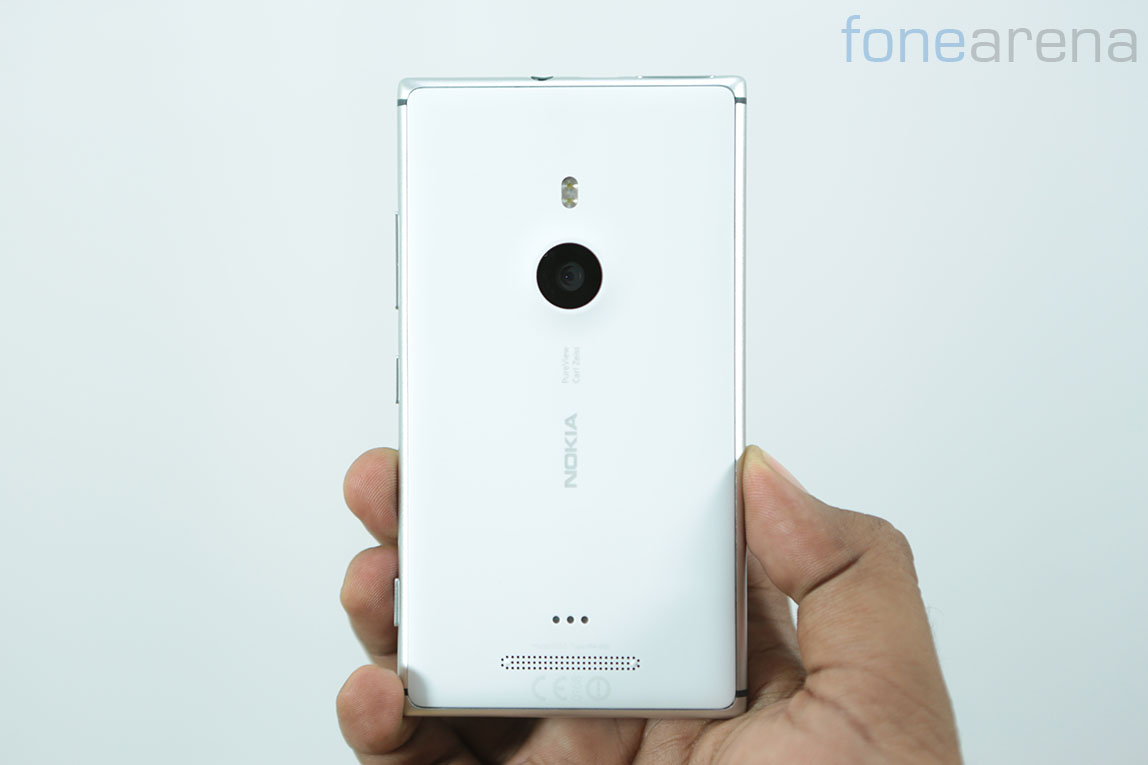 Another slight change is the 8.7megapixel unit that is almost spec-to-spec similar to the 920 except for the “World’s first” six element lens. The sixth element of the lens is an improvement and an addition over the 920’s 5-element lens, and Nokia says that the extra element will add some extra sharpness that add to the clarity of the image. And not only that, the ISO can now go up to 3200, and the algorithms have somewhat changed with the update. We will test it out and let you know if there are any changes. But the differences are not only in hardware, but in software too.

The Nokia Lumia 925 ships with the latest “Amber” firmware that enables some new functionality. Most notable change is “Glance screen” which enables a low power screen saver for the lock screen and lets you wake it using a double tap, like the Nokia N9. The “Amber” update also brings in some camera tricks in the way of the Nokia Smart Camera, which can manipulate your image in a lot of ways after taking a burst of 10 images, and the firmware enables it to be set as default on long press of the shutter button.

Another interesting change we saw was the Windows capacitive button acting as a pulsating light for notifications. We haven’t tested its functionality in detail but it did blink while charging, and hopefully should work for various other notifications too. This is similar to the various yesteryear Symbian devices having a “breathing” light on their home buttons.

So, that’s about it for our first impressions of the Lumia 925, we will certainly have a lot more to talk about in our review. Check back soon for more coverage and do keep and eye on our YouTube channel for more Nokia Lumia 925 videos.

Note – We sourced this Lumia 925 from the UK, no idea about the Indian units and their availability yet, sorry! But we will keep you posted!