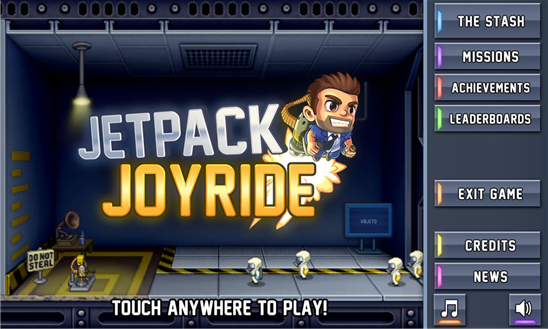 Months and years after making its presence felt on other platforms, including Windows 8, the Halfbrick hit game “Jetpack Joyride” has finally landed on the Windows Phone 8 store. It is incredibly frustrating that the Windows Phone 8 version took nearly 8 months after launching on Windows 8, and we thought Windows Phone 8 shared code with its parent. But anyways, the game is finally here and it’s free. The “endless runner + Helicopter” style gameplay is incredibly addictive and the power ups are worth playing for.

Wading through various obstacles in a scientific lab of sorts, you stumble across minions while dodging electric fences and targeted missiles. Occasionally the player receives power ups which are oblivious to obstacles giving one more chance at human error. The casino slot machine after ever trial lets you chance upon various power ups that may even provide another chance of life. Exciting game nevertheless. If you have never tried this game on you Android or iOS phone, this might be the chance to check it out.

Grab the game here, available for download from the Windows Phone store.