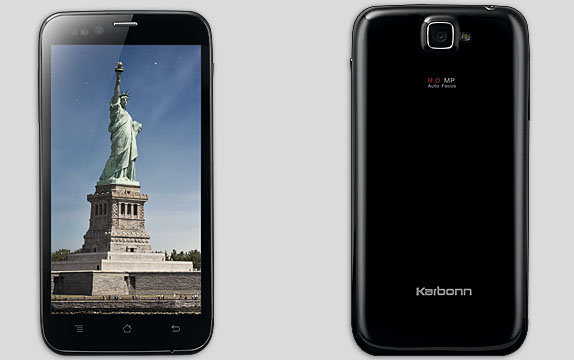 A couple of months have passed since the launch of the Karbonn Titanium S1, with its nice mid range offering. It had a 4.5 inch qHD screen, but Karbonn has felt the need for a bigger screen we guess, and now it has launched the Karbonn Titanium S5 with a bigger 5 inch screen. With it almost mimicking the specs of the Titanium S1 except for the 8 megapixel camera, the 2MP front camera and the battery, it is clear that Karbonn is really catering to demands. It has a 1.2 GHz Quad core processor, presumably the Snapdragon S4 Play, which was the first chipset that added support for dual SIM and was a Quad core processor at the same time. This is the same as the Titanium S1. The device runs on Android 4.1 JellyBean.

The detailed specs of this device are listed below –

The phone is listed in Snapdeal and is available for purchase immediately. It costs Rs. 11,990, while the Titanium S1 costed Rs. 10,990 at launch. Check the source link for more information.