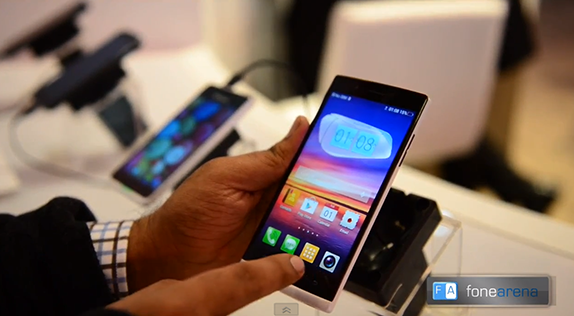 This week at MWC 2013 in Barcelona, we got our hands on the Oppo Find 5 which is one of the first Full HD display smartphones to be announced.

The phone has one of the nicest displays we’ve ever seen on a smartphone. It’s 5 inch full 1080p display (441ppi) looked slightly better than even the HTC Butterfly. The same goes for the design which is very fluid and pure.

The phone runs on Android 4.1 Jelly Bean and we expect an update to 4.2 in the near future. It is powered by a 1.5GHz Quad Core Snapdragon S4 Pro processor and 2GB of RAM. It is equipped with a 13 megapixel camera with an aperture of f2.2 and is capable of recording videos at 120 fps as well in HFR (High Frame Rate) mode.