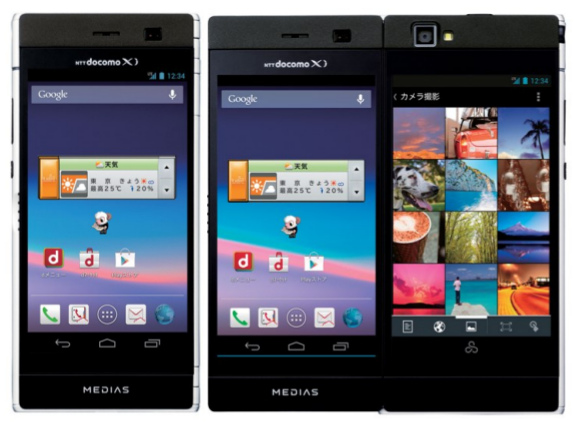 NTT Docomo has announced NEC Medias W (N-05E) in the docomo NEXT series in their Spring 2013 line-up. This Android smartphone comes with dual 4.3-inch (540 x 960 pixels ) displays that can also fold, so that you can use it as a single screen. Both these displays create a square of 5.6-inch display that would offer more screen real estate to use keyboard in one screen, while using SNS apps, browsing and watching videos. Even though we have already seen Kyocera Echo and the Sony Tablet S2 back in 2011 with dual touch screen displays, this one seems better in terms of implementation and design.

It is powered by a 1.5 GHz dual-core Snapdragon S4 MSM8960 processor and runs on Android 4.1 (Jelly Bean). It has a 8.1 MP rear camrea with LED Flash, BSI sensor but lacks a front-facing camera. Considering the from factor, this phone is just 12.2 mm thick, but weighs about 183 grams.

The NEC Medias W comes in Blacks color. It is expected to be available from NTT Docomo from early April 2013. NTT Docomo unveiled 12 new mobile devices including the Optimus G Pro and Sony Xperia Tablet Z in their Spring line-up.