We all know that Google has been working on a self driving car, but while kids are using their Android devices to drive miniature cars, Nissan has been trying to replicate it with the NSC 2015. Think of a future where you reach your office and get out of the car and press a button on your phone to park the car and the car automatically parks it. Now that will save us a lot of time and also make our lives easy. 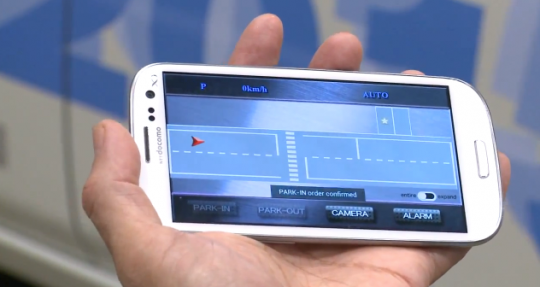 Well, Nissan has already started working on this technology and will be releasing cars with this feature by 2015. They actually demoed their progress at CEATEC using a Samsung Galaxy S III. The main reason to come out with this technology was to reduce the error, saving time and security. They have really tried to bring the percentage of committing an error close to zero which will avoid cars from colliding.

Saving time is also a big thing they are looking at, many people lose a lot of time parking their cars. What if the car parks itself using the application on your smartphone. My words are not going to explain this bit effectively so do check out the video below. Another thing Nissan is looking to cover with smartphones is the security of your car. They have attached cameras around the car whose feeds are accessible by your phone, so that you can command the car’s alarm to go on whenever you think there is a threat and also call the cops.

These technologies used are really amazing and I am really looking forward to get one of these cars in the future, now all we can do is watch the video.