An ebay seller is currently selling the queue position number four at the London’s Regent Street Apple store. You will have to bid for £78.00 or more to get the number four position in the queue. 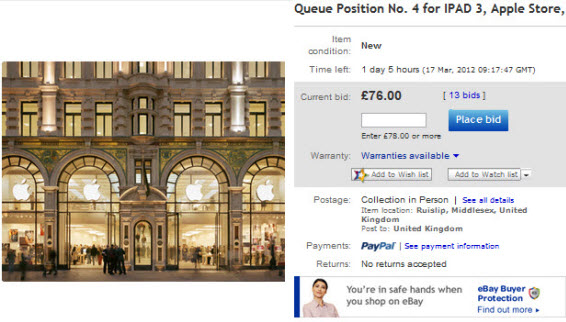 Every year, hundreds of people line up outside the Apple store to get the latest version of iPhone as well as the iPad. Some people find it dumb, while the others love to wait in the queue to get their latest smartphone and tablet outside the Apple Store. Last week, Apple announced the next generation of its tablet device, the iPad 3 or the new iPad. It features a 9.7 inch Retina Display, sporting a resolution of 2048 x 1536 pixels, Apple A5X dual-core processor, 5 megapixel iSight camera, 4G LTE Connectivity and much more.

Australia was the first country to get the new iPad, followed by Japan. Yesterday, hundreds of people lined up outside the Apple’s CBD store in Sydney and also at Apple flagship store in Hong Kong. The new iPad will go on sale in the UK and US within few hours. iPad buyers have already started queuing up at the London’s Regent Street Apple store from the last four days.

If you did not find a spot at Regent Street Apple store, then we have good news for you. An ebay seller is currently selling the queue position number four at this Apple Store. You will just need to shell out some extra bucks. Thirteen eBay users have already placed their bid. At the time of writing this article, an eBay user will have to bid for £78.00 or more to get the number four position in the queue.

According to the seller, “The queue outside the store is already 300 long. I took my place by mistake in the queue two days ago not realising it was the queue for the new Apple iPad 3 to be released in UK on 16th March. I don’t require the position now as I am not an Apple fan and am therefore putting it up for sale to the highest bidder.”

The seller wants the winner to pay withing 3 hours of the auction end and take up their position in the queue by 08:00 hrs on Friday, March 16, 2012. Are you planning to bid for the new iPad queue position number 4 at Regent Street Apple store in London? Let us know your views in the comment section below. To learn more about the new iPad and its pricing, head over to this page.