Over the past year, a lot has been said in regards to the Nokia N9 and Meego’s future, be it in Nokia’s portfolio or with other manufacturers. We all don’t really know what the future holds, but after a couple of weeks with the N9, a lot of joy and a lot of sorrow using it, there are some Nokia N9 ideas that I think are worth having in other devices _ Meego, Windows Phone, S40, Symbian, or whatever the future Nokia devices will run _ and some others that I believe should be locked away in a drawer for all eternity. I’ll take the liberty of loosely calling these ideas “novelties” even though some of them aren’t exactly new to Nokia or the mobile industry as whole, but these have mostly been made more prominent with the N9. 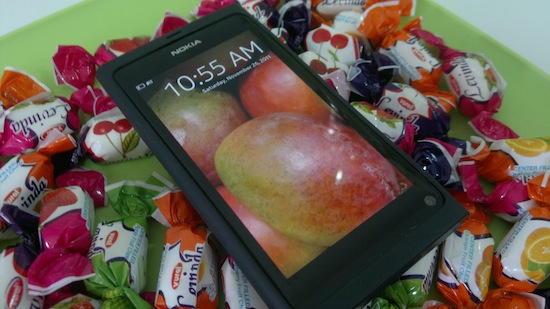 The N9’s build quality is wonderful and that’s all thanks to the Polycarbonate materials used. The whole body is carved out of one piece of plastic, yet when you hold it, it doesn’t even feel like plastic. It’s tough, rigid, quite resistant to scratches, and it never got hot while I was using it like my metal Desire Z does, it carries wireless signals without any blockage, and it plain works. Carry on with polycarbonate, Nokia, it’s a fantastic decision!

The interaction on the Nokia N9’s screen is so natural that you barely even notice it. That’s because you make no effort sliding your finger across the screen, and the whole gesture somehow gets out of the way to allow you to enjoy whatever you’re doing. This is all due to the curvature of the glass on the touchscreen that makes gliding a finger easy, with no interruptions and no real barrier to where the gesture should start or end. If curved screens aren’t very expensive to produce, I want to see them on all new Nokia touchscreens, budget, midrange, or high-end, because they’re a brilliant improvement.

You’ve heard a lot about Swipe, and for good reason. It’s a natural interaction to switch apps, close apps, or send them to the background. Just like the curved glass, it’s a brilliant piece of innovation, mainly for the reason that it gets out of the way, and the best technology is the one you don’t have to think about but that becomes second nature to you. Although there are some kinks with the way Swipe works now, they can all be ironed out, and the result will be a no-button fluid motion that simplifies the way we work on our phones. I can easily see Swipe trickling down to S40 touch devices and becoming the new norm for mobile interactions.

I don’t know when on earth we moved from one action to unlock to requiring an intricate series of steps, that differ from one brand and even one device to the other, just to get to actually use our phones. With the N9, one step of the process was simplified, thanks to the option to Double Tap to unlock. Every time I do this, I smile, as it always seems to me that I’m telling the N9 “hey, wake up you!” It’s simple, there’s no tiny button to aim at but the whole screen area, and it’s also quite natural to use. I know many people will still prefer a physical button, and many will say that there are false-taps _ when walking or in the pocket _ that make this unusable, but I’d like future Nokias to have this, at least as an option, so I can enable it if I want to. And I’ll want to.

Case in the box

One of the sweet surprises of the N9 was the case that came in the box. It fits the N9’s color, is made of tough silicone that doesn’t attract fibers and dust, that bends well but also is rigid enough to take on falls and other hazards, and the best part? It fits the N9 like a second skin. I know this is a tiny detail, but you know what, when I buy a phone, I don’t want to spend hours and money trying to find a case only to see that there is no opening for the microphone or that the headphone jack hole doesn’t align well. A made-by-Nokia case is a boon to have, especially for high-end devices. These could use some protection and their buyers have already forked out almost a fortune to get them, so they deserve a little plus.

I’ve already raised a lot of controversy talking about how much I hate this display technology in one of my previous N9 posts, and I’ll reiterate here. There’s a 90% chance that you won’t notice the artifacts or the pixelation, but there’s a 10% chance that you’ll have good vision and you will see them. And when you do, trust me, the whole experience for reading any kind of text (browser, ebook, email, twitter, chat) or viewing any image is horrible. The fact that many people do not see it does NOT make it an okay technology, does NOT make it acceptable, does NOT justify it. For Nokia, Samsung, and whoever else decided to use it. It’s a torture and a punishment for people with good eyesight. I want Pentile Matrix displays to be locked into a coffin and buried somewhere not even Voldemort could resurrect from.

Ever since the N97, Nokia has been shipping some decent in-ear earphones with their high-end range of devices, including the N86, N8, and others. With the N9, we’re back to the dreadful regular earphones. Now personally, I do not care about this, as I have my own Sennheiser CX-500 set that no in-the-box set of earphones is going to replace soon. But, I know a lot of people who simply can not stand regular earphones, and I agree. They’re painfully uncomfortable, they fall out easily, and the in-ear type provides better sound and a slight noise-reduction, by design. It’s no secret that all high-quality high-priced earphones by popular brands use the in-ear design and not the regular one, so yes, in-ear wins any day. I’d accept to see regular earphones with any phone that goes on sale for less than 300$, but above that price, it’s really a no-brainer to include in-ear in the box.

As a side anecdote, I’ve argued for 2 years with my friend about this in-ear vs regular design, and she maintained that regular is more comfortable for her. Until I discovered one day that she’s using the Medium size plugs and they’re hurting her. I asked why she didn’t go for the small size, and she looked in awe at me. She didn’t even know there were different sizes! Since then, she moved to the small plugs and she’s a total convert. I asked her the other day what she thought of regular earphones and she chuckled, saying that she tried an old set a few weeks ago and found them way too painful.

There you have it. The 5 “novelties” that were either introduced or made more prominent with the N9 that Nokia should definitely reiterate on and use in many, many devices down the line, regardless of whether they run Symbian, Meego, Windows Phone, S40 or any other OS really; and the 2 that should be removed instantly from any unannounced device in the lab.

Have you been using the Nokia N9? If so, what other features do you think are worth trickling down to other devices, and what annoyances would you prefer never to be seen again?