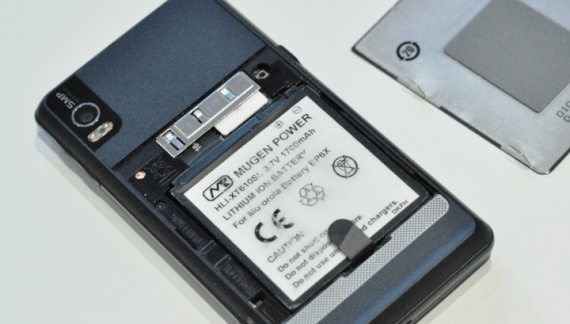 We at FoneArena are big fans of Mugen Power batteries. For those who doesn’t know, Mugen Power manufacturers third party replacement batteries for smartphones. Their speciality are batteries which retains the same size as the standard battery that comes with your phone; and the extended battery with twice the capacity and size. These extended batteries are popular among power users. However today I will be reviewing the normal sized replacement battery.

Mugen Power has been kind enough to send a normal size battery for my Motorola Milestone 2. The battery from Motorola has a rated capacity of 1390mAh where as the one supplied by Mugen Power has a capacity of 1700mAh – a 20%  increased in Lithium Ion battery cell capacity. Yet the battery remains the same size physically as the one by Motorola. I find this to be very impressive, but will the extra battery capacity translate well in real life?

I have been using the Mugen Power battery for a couple of weeks, swapping between it and the standard Motorola battery everyday and I am happy to report that there is an improvement with the one provided by Mugen Power. This review isn’t based on any scientific test as I believe the best way to review a product is to subject it to everyday use based on one’s personal usage pattern.

My usage pattern is somewhat predictable: I always have Gmail, Twitter, Foursquare, Facebook and WhatsApp turned on in the background. I listen to music via the phone about two hours a day (my commute time), and do the odd web browsing with Opera Mini. I hardly play games on this phone. My Milestone 2 is always switched onto to 3G, with the GPS receiver only turned on whenever I want to check into Foursquare or check Google Maps. When I am out I turn off the WiFi.

A typical day out with the standard Motorola battery lasts about six hours, which isn’t a lot. Admittedly I am a power user who tweets about 50 times a day on my phone, so a normal user will never see their smartphone battery dead after barely half a day of usage. With the Mugen Power battery, I found that my phone was able to last for about eight hours, which is in line with the increased in capacity.

The increased in battery life is something I have always expected, but the fact that Mugen Power are still able to make batteries with increased capacity while retaining the same physical size still impresses me. This is the perfect battery for those who wants a larger capacity battery but isn’t willing to compromise on the weight and dimensions of their phone.