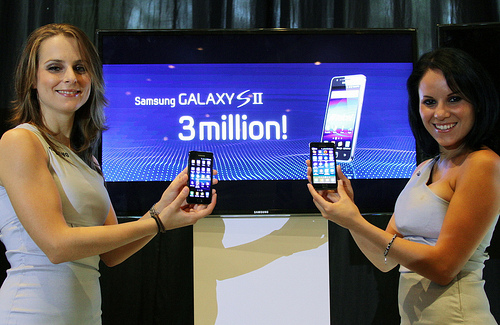 Looks like Samsung’s latest Android flagship – Galaxy S2 has set new sales records for the company as it has managed to sell  3million units globally in just 55 days. Not a bad number at all ! The company claims one S2 was sold every 1.5 seconds.  Although the S2 has been successful , it has  had it’s own share of problems some users have faced issues with the display and camera. We ourselves spotted a display bug in the S2 . some users also report over-heating. But for the most part , S2 users seem a happy lot. If you are picking up an S2 soon , make sure your unit does not face any issues mentioned above . For S2 owners , its party time ! Also do check out our review of the device.

Here is the press release

A global smart buzzword, Galaxy S 2 set a record of 3 million global sales only in 55 days.

Samsung Electronics said on July 3 that its flagship smartphone Galaxy S 2 has marked the accumulated global sales of 3 million units, 55 days after its initial release: Within the period, a unit of Galaxy S 2 was sold in every 1. 5 seconds. This record shortens the record of 85 days of its predecessor Galaxy S, a ten-million global seller, by 30 days.

Meanwhile, Samsung Electronics held the launching events of Galaxy S 2 in Mexico and Brazil on June 30 to spread its ‘smart’ frenzies to Latin America.