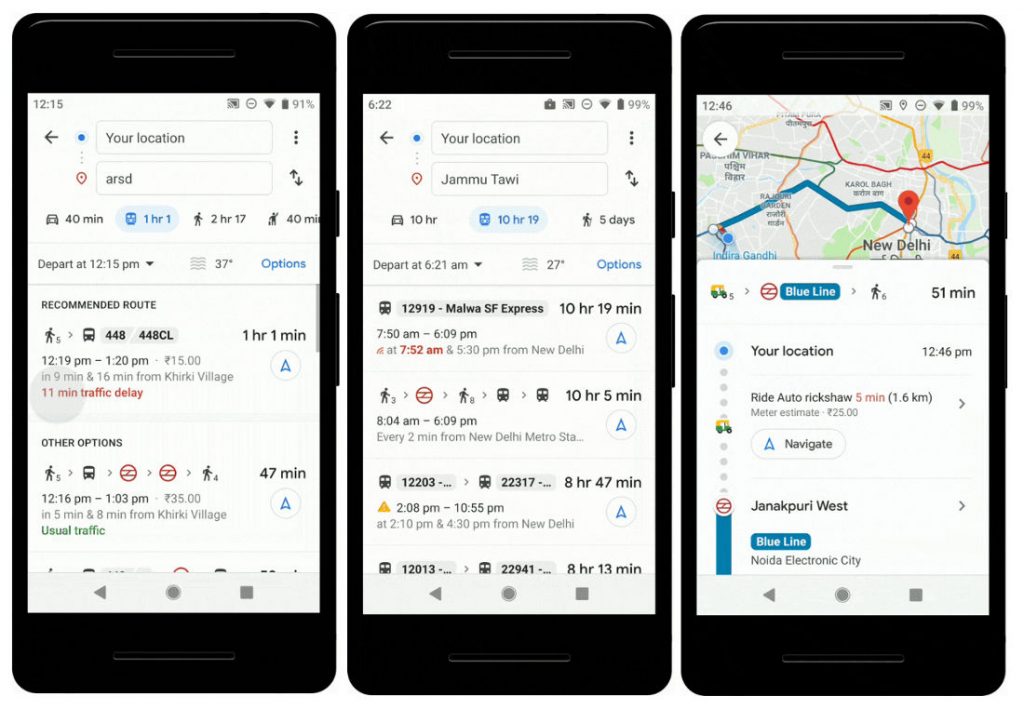 Google Maps has been getting new features of late, and we saw features like AR Navigation, speed limits and speed traps being rolled out to users recently. In similar lines, today, Google Maps in India is officially getting three new features namely Bus travel times from live traffic, live train status for Indian Railways trains, and mixed-mode commute suggestions.

Bus schedule based on live traffic

Google Maps is making the commute easier for users as now it will notify them about their bus schedule based on real-time traffic data. Google says that they are using public schedules and live traffic data to calculate delays and provide accurate travel times.

In order to use the new bus schedule feature, users have to enter their starting location and destination, then tap the transit tab. The results for bus travel times from live traffic will indicate the time in green when the bus is running on time or red when the bus is delayed. This will help users to plan their commute easily.

There are already applications that will show you live train status for Indian Railways trains. Google in partnership with ‘Where is My Train’ app is now bringing that feature to Google Maps and it can now help you know when your train will arrive by indicating the real-time status.

To use this feature, users have to enter the starting station and destination station to see a list of trains between the routes. After entering the required information, users can then easily see the real-time status, and whether any of them are delayed, right inside Google Maps.

Google Maps’ public transport tab will now give users mixed-mode commute suggestions i.e., combine auto-rickshaw and public transport. This new feature will now suggest users when taking such a journey is a good option, how long it will take, which station the user should take an auto-rickshaw to/from along with rickshaw meter estimate and departure times for the user’s transit connection.

This feature will be available for Delhi and Bangalore initially and will soon be extended to more cities.

Commenting on this, Google said: