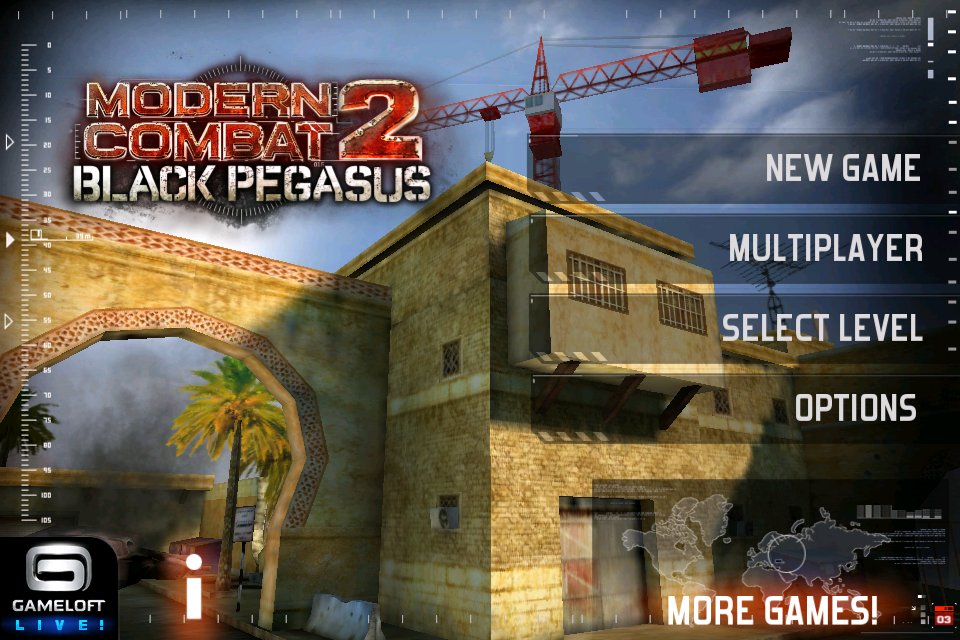 I recently had the chance to try out Modern Combat 2: Black Pegasus thanks to Gameloft Portugal and I thought it would be great to share my thoughts on what is one of my favourite games on iOS.The graphics are amazing. So amazing that you wonder if you are really playing this on a phone. Especially if you’re playing this on an iPhone 4, it’s particularly striking thanks to the Retina Display.

There are three things you need to control on an FPS. The character itself (moving around), the camera (where you’re shooting) and the actual shooting key as well as the gun, reloads, etc. The game supports the usual on-screen controls but the support for the gyroscope helps a lot. Since you need to control three things and you only have two thumbs you will have to stop shooting or moving to aim correctly. The gyroscope fixes this in a beautiful way and works wonderful. The learning curve is there but then again, when the accelerometer came in the same thing happened.

The game also comes with a soundtrack that most of the times keeps you hooked to the action (specially if you’re using headphones) but sometimes can get a bit repetitive. Not to worry though. You’ll won’t even notice it 90% of the time with all the shooting going on.

The game is made of 12 long levels. I played through the game pretty quickly but I was really a heavy gamer, like wasting two full afternoons playing this on my iPhone and some other small bits here and there so you can expect a pretty decent longevity with this game.

I won’t spoil it, but the storyline is amazing. It gets you hooked up and as you get deeper and deeper it only gets better. The last mission was probably one of the most addictive moments I ever had on a mobile game (and that includes PSP games as well).

Besides the regular point and shoot action on any FPS, you’ll find some areas where you are asked to tap certain parts of the screen to form a sequence and make a combo. This can be either to dodge an enemy that was hiding in the corner, to avoid getting hit by an exploding barrel or even to escape certain death when you see an RPG headed your way. 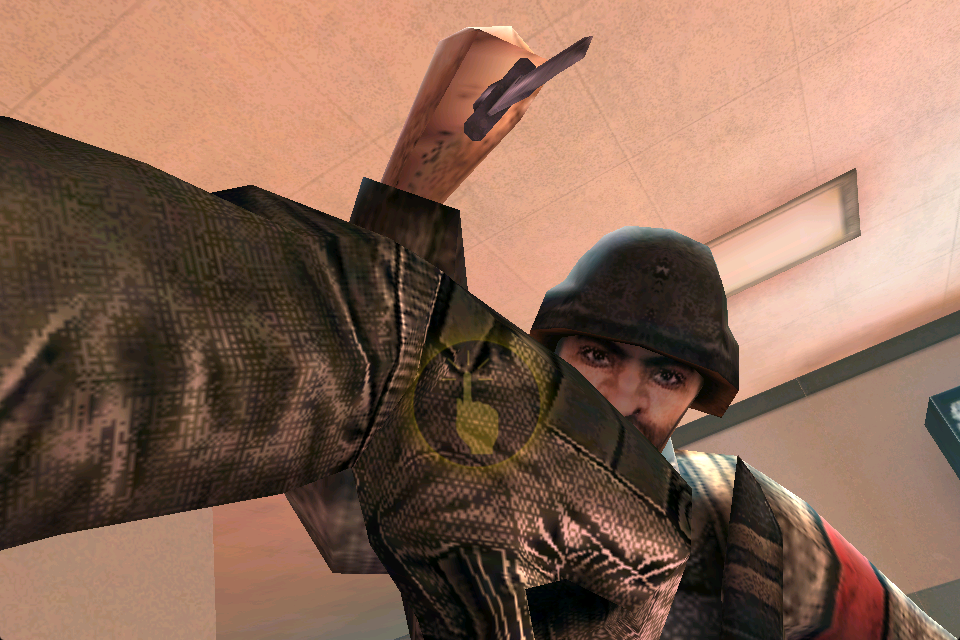 Through the game you’ll also find that you can interact with some parts of the scenario. You can command a turret for instance to kill large amounts of enemies. You can also blow off enemy towers or even shoot an RPG to blow off an enemy car. Not to mention that you’ll find some levels where your sole objective is to be on top of a turret of a truck and fend off enemy attacks. 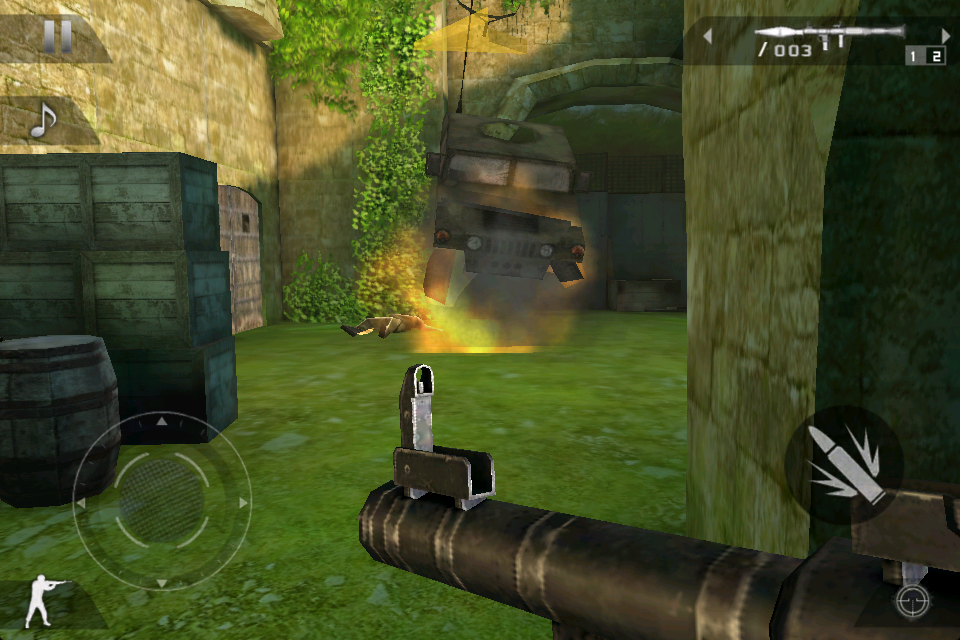 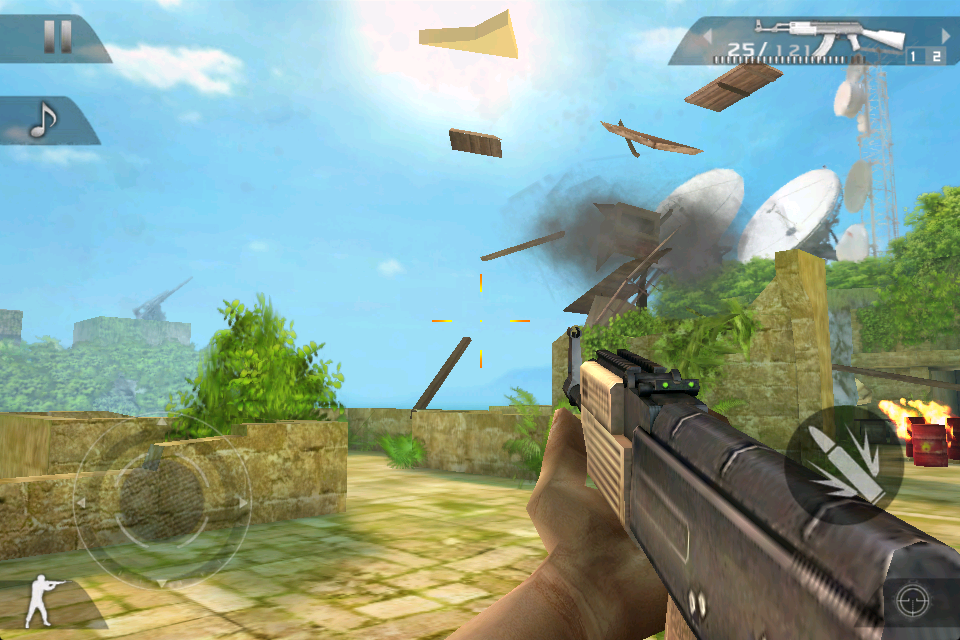 But most of the game will be spent on ground walking only with your own legs and on those lines , how engaging is the game? Well, a lot. You have a big arsenal of weapons to choose from ranging from shotguns, to assault rifles, to sniper rifles and even the big beast that is the RPG launcher! And of course the obligatory array of flash and frag grenades to go along with this.

As you can probably tell I’m deeply in love with Modern Combat 2. After bringing an amazing FPS that I thought was really hard to beat with the first iteration of Modern Combat (Sandstorm), Gameloft was able to really push themselves here and deliver an even better game than Sandstorm with Black Pegasus. Personally this is a must have FPS on my iPhone as I every now and then go in there to shoot some terrorists even after finishing the game.

Oh and I almost forgot! MC2:BP also comes with a Multiplayer mode! I’ve not been able to test the local multiplayer but the online one is top-notch. It connects to your Gameloft Live account (you can create one right from the game) and the experience is really good as well.

All in all, MC2:BP is a great game only let down by the controls. The gyroscope really helps a lot.  Even so, this is one of the best of it’s genre and I strongly recommend it!´

It’s available on the App Store for $6.99 and you can get it here. Make sure you are on a fast internet connection as the game is about 450MB in size