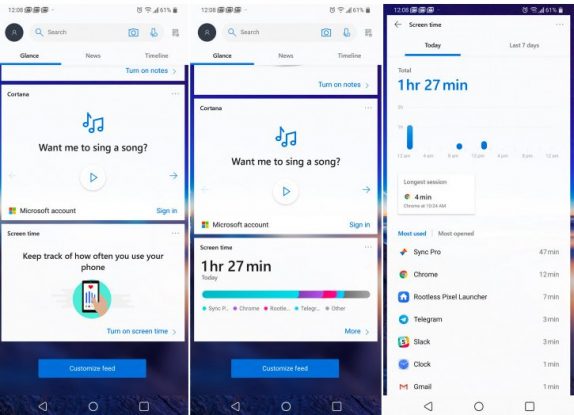 Microsoft launcher for Android gets a new update which brings Android 9.0 Pei’s Digital Wellbeing like feature which it is calling ‘Digital Health.’ This allows you to track which apps you use, how long you use them, and even how often you unlock your phone.

Those are the core features of Android’s Digital Wellbeing wrapped up inside the Microsoft Launcher. The Digital Health feature is present on the far left home screen panel. It needs usage access in the system settings before it can track data, though. However, it doesn’t have the advanced features of Android Digital Wellbeing like app timers or winddown mode. The Microsoft Launcher 5.1 beta is available in the Play Store if you have signed up for the beta, if not you can download the APK and side-load it.

The Launcher To Do card now shows tasks from apps like Microsoft To Do, Outlook and Skype

Cortana now has an updated card with commute/traffic

“Hey Cortana” as a beta feature for the en-us market

Cortana support in the ES-ES market

Bing mini-answers shows you quick answers for stocks and currency