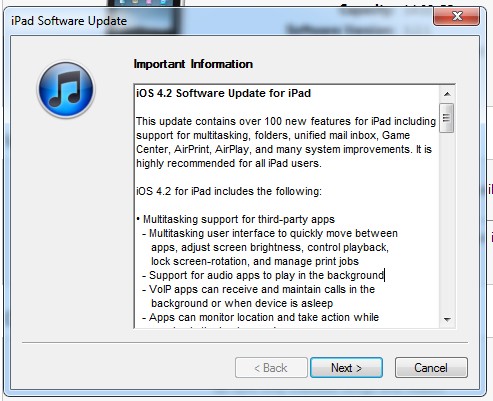 Apple has finally released the much awaited software update for the Apple iPad in the name of the iOs 4.2 Update. It finally brings Multitasking to the iOS tablet along with a bunch of other new features. One such feature is Unified Inbox which was already available on the iPhone. You can find the full list of updates belowDownload iOS 4.2 for iPad here or you can grab it via iTunes

This update contains over 100 new features for iPad including support for multitasking, folders, unified mail inbox, Game Center, AirPrint, AirPlay, and many system improvements. It is highly recommended for all iPad users.

iOS 4.2 for iPad includes the following:

– Support for audio apps to play in the background

– Apps can complete tasks in the background

– Unified inbox to view emails from all accounts in one place

– Threaded messages to view multiple emails from the same conversation

– Messages in the Outbox can be edited or deleted

– Invite friends to multi-player games over the Internet

– Play multi-player games by auto-matching with other players

• Use Spotlight to search the web and Wikipedia

• Suggestions and recent searches appear during a web search

• Support for iTunes gifting of apps

– Location Services can be enabled and disabled per app

– Prevent adding friends in Game Center and deletion of apps