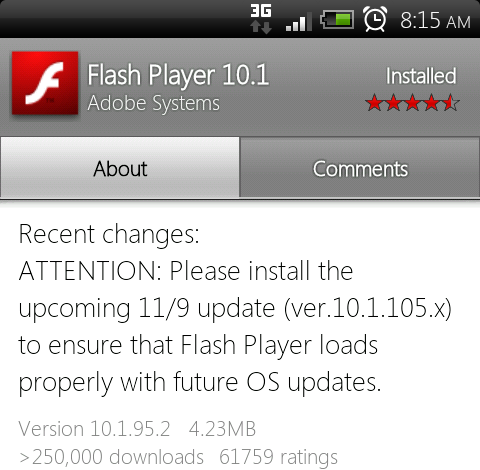 Android 2.3 is around the corner, and Google will launch it anytime now. Our friends over at IntoMobile are saying that Google will officially launch the Gingerbread SDK on November 11th, and now Adobe Flash Android app is also suggesting that “Please install the upcoming 11/9 update (ver. 10.1.105.x) to ensure that Flash Player loads properly with future OS updates.” So may be IntoMobile is right about it.

A developer known as Alvaro Fuentes Vasque tweeted that the developer versions of Nexus One will receive the Gingerbread SDK in a couple of days, and it could be November 11th. May be it’s confirmed that Google is officially launching the Gingerbread on November 11th, so Android fans mark your calender right now.