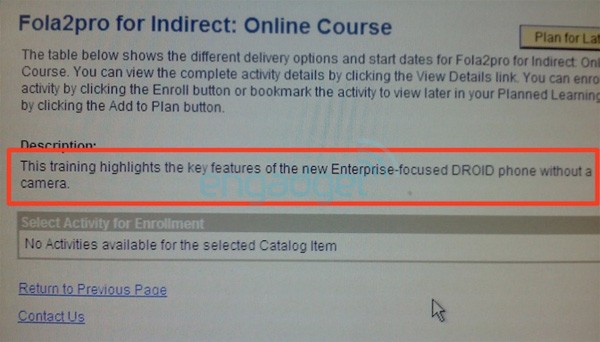 Mobile phones have changed a lot. If you go back in past, mobile phones were very simple, and people only used it to call, but now mobile phones are part of everyone’s life. People do browsing, checking email, taking photos, messaging, playing games, and a lot of other stuff. Camera is one of the main and most common features in mobile phones, and the first camera phone was launched in November 2000 by Sharp. If your dream is to get a high end phone with some good features, camera, and other stuff, but you work in a company where you are not allowed to carry a phone with camera, then your dream is crushed, but Motorola want to help you in this situation. According to the screenshot above, Motorola is bringing a camera-less version of Motorola Droid Pro, and most probably it’s going to hit Verizon Wireless. Motorola Droid Pro is a latest device from Motorola, and Motorola is calling it the Blackberry killer. So if it’s real, then you will be able to carry a high end phone, and then you can easily make your colleagues jealous. Anyone looking forward to the camera-less version of Droid Pro?