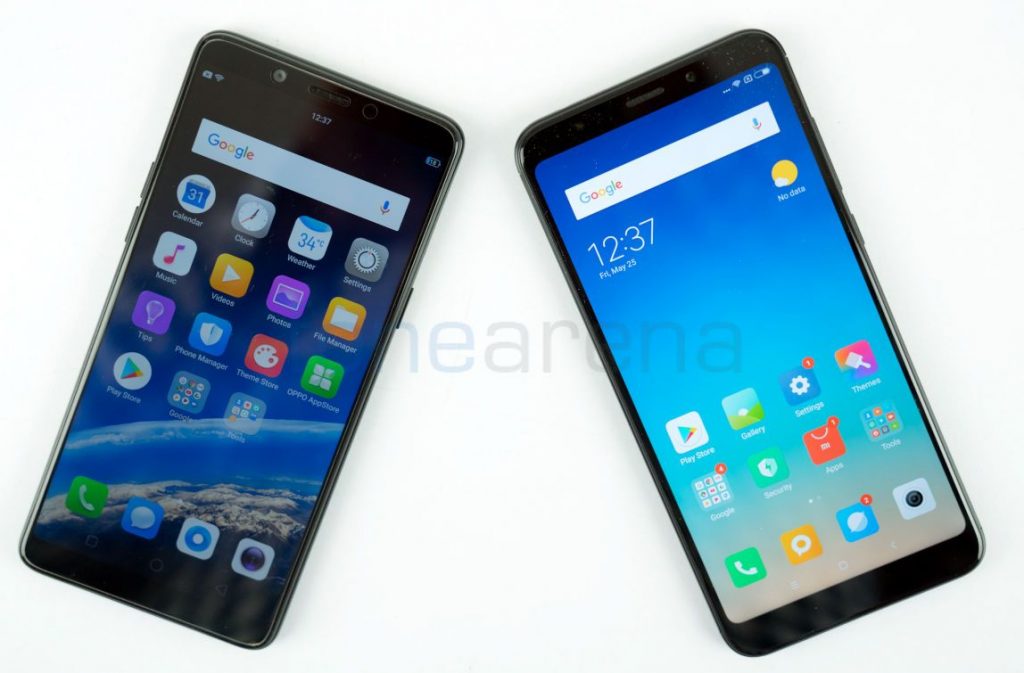 In an attempt to take down the Xiaomi’s Redmi Note 5, the sub-brand of OPPO, named as Realme launched its first smartphone in the Indian market dubbed as Realme 1 with some impressive specification on board. The Realme 1 comes under the VFM (Value For Money) segment, unlike other over-priced phones. Here is a comparison of Realme 1 with its arch-rival Redmi Note 5 to find out who wins the competition. 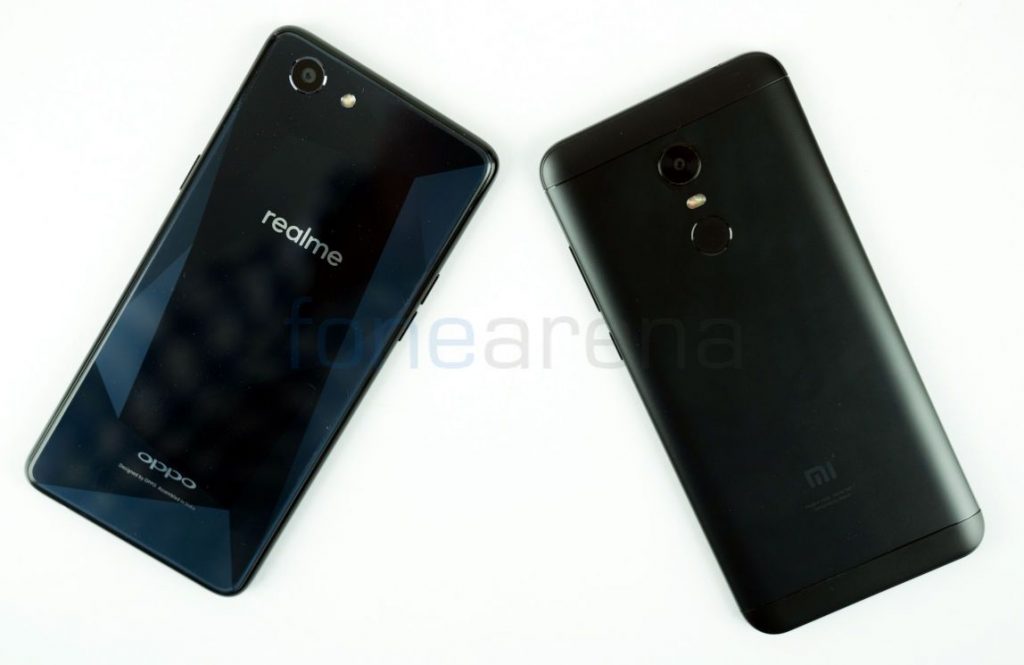 Talking about the design, the Realme 1 is surprisingly refreshing with a glossy back and symmetrical design that makes the phone look like a diamond with each angle reflecting and shinning different black colors. There are 15 tangent planes carved on the back body, and each plane has different colors. These colors differ as for the density and dip angle changes. There is a glossy rim running on the sides that house the interactive elements of the device. Talking about the build, the Realme 1 feels solid in hand and definitely looks premium too. It offers good grip, attracts fingerprints on the back and bit slippery as well. Having said that, the problem can be solved if you use the back case given inside. The device measures 7.8mm in thickness and weigh around 158g. 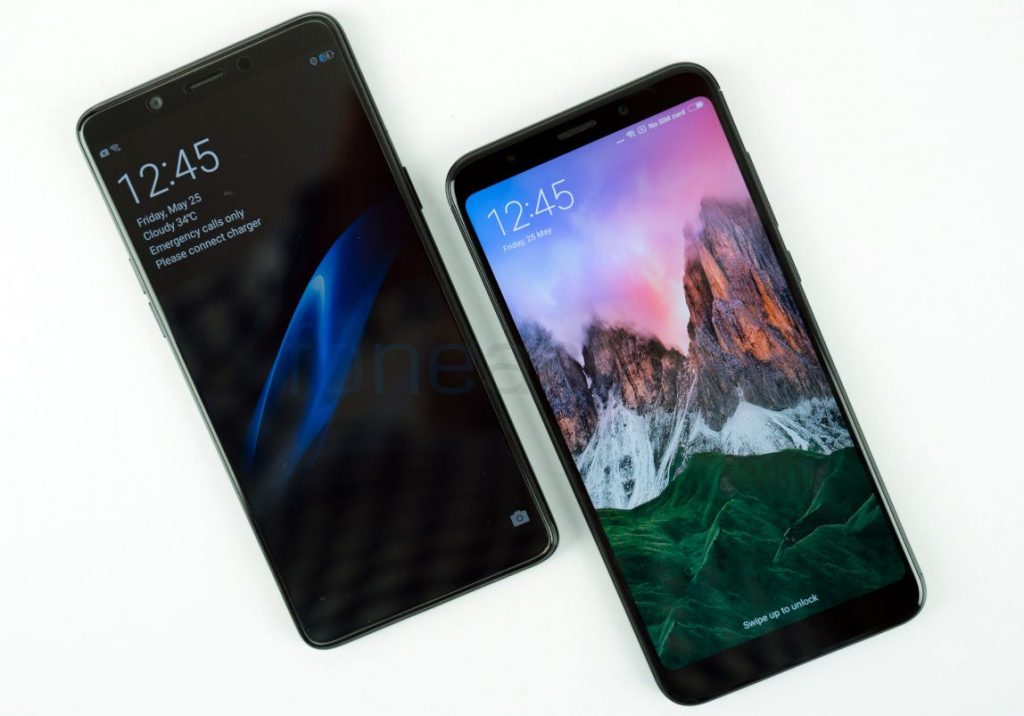 On the other hand, the Redmi Note 5 more or less carries the same design as the Note 4 but has 18:9 2.5D curved glass screen with gently rounded corners as the differentiation factor. The phone is 8.05mm thick and weighs around 180g. Even though the phone has a large screen, it is compact to hold. It has a screen-to-body ratio of about 77%. Similar to the predecessor, it has a metallic finish in the middle, while the top and bottom parts of the back have a plastic finish where the antennas are present.

The build quality of both the smartphones are good but when it comes to design, the gorgeous rear of Realme 1 is anytime ahead than the old school Redmi Note 5. 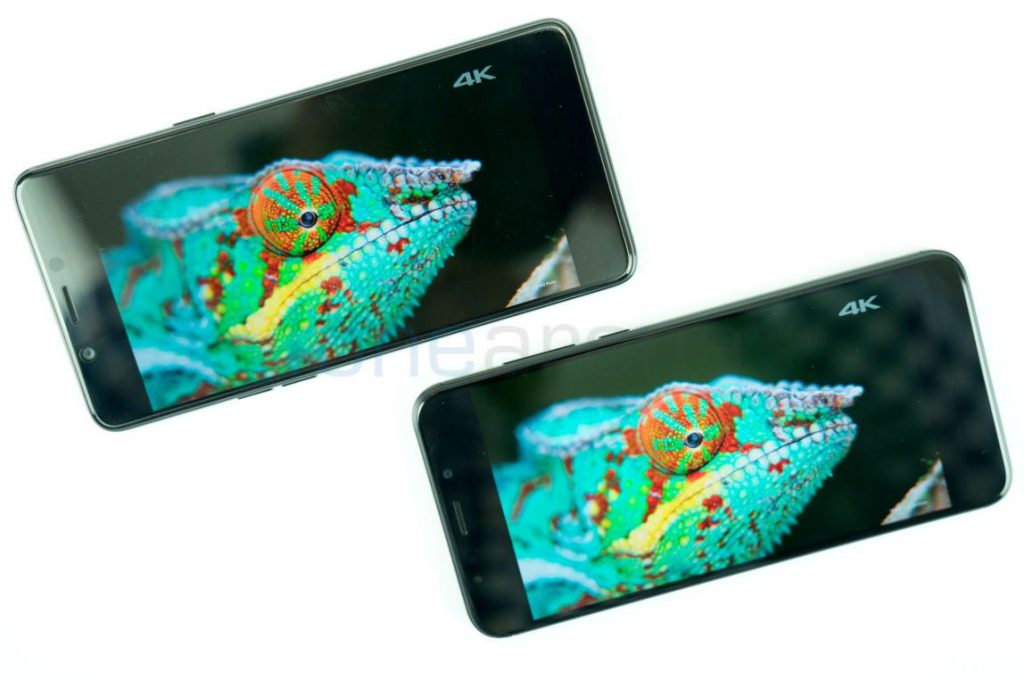 The Realme 1 sports a 6-inch (2160 x 1080 pixels) Full HD+ IPS display with 1.98mm slim bezels on the sides and 84.8% screen-to-body ratio. It has a pixel density of about 402 PPI. The display is bright, text looks sharp, color reproduction is on point and viewing angles are good. The display is perfectly readable under sunlight conditions and other outdoor scenarios as well. This device also offers screen Color temperatures adjustments — Default, Warm and Cold.

On the other hand, the Redmi Note 5 has a 5.99-inch Full HD+ display with a pixel resolution of 2160 × 1080 pixels and a pixel density of about 403 PPI. The display is bright, thanks to 450 nits brightness and has 1000:1 contrast ratio. Sunlight legibility is good, since it has a Sunlight display that uses hardware-level technology to adjust the contrast of each pixel in real time, so images are less affected by glare. 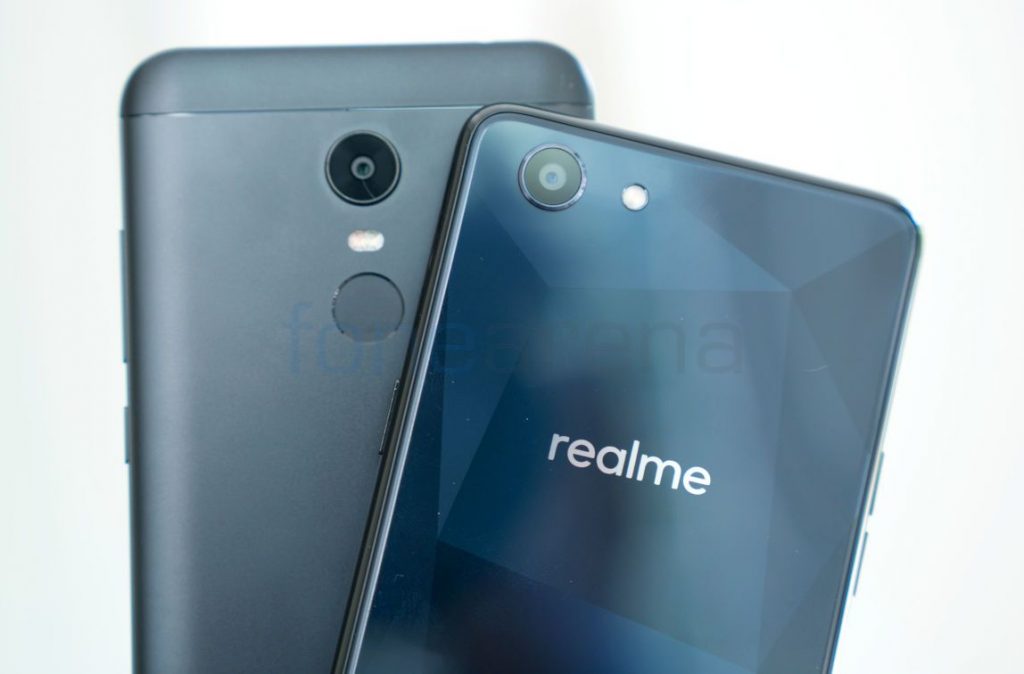 The Realme 1 comes equipped with a 13MP rear camera with an aperture value of f/2.2 accompanied with LED flash. The front side of the device is taken care of 8MP camera with an aperture value of f/2.2. Talking about the real world usage, the daylight pictures come out very well with good amount of details, so does the Macro shots. The camera is quick to focus the object. The 8MP front camera produces some good images too considering the number specified on the spec sheet. Most of the images turned out to be good both in daylight and low light conditions. It also has ‘AI beauty’ feature that intelligently provides the most suitable beautification for users.

The Redmi Note 5 has a 12-megapixel rear camera with an aperture value of f/2.2 aperture accompanied with LED flash. It has a 5-megapixel front-facing camera with f/2.0 aperture and selfie flash. Coming to the image quality, daylight shots are good in bright conditions, but some images are a bit dull. HDR shots are better, and macro shots are good as well. In low-light, there is a lot of noise in the image even when LED flash is on. 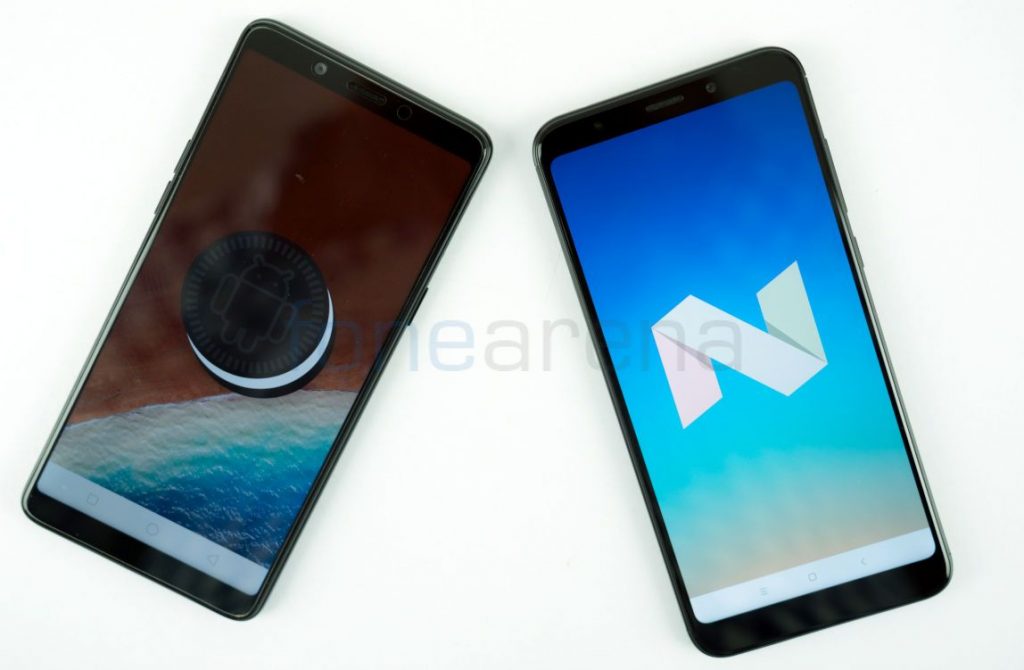 The Realme 1 is shipped with Android 8.1 (Oreo) based on ColorOS 5.0 out of the box. It also comes with tons of customization options including Quiet Time, customizable navigation keys, Gestures, Assistive ball, and other security features. There is a “Clone apps” feature when turned on, generates the duplicate version of the app you chose. Moreover, there is a separate toggle for Split screen, when enabled, just swipe up with three fingers to enter the Split screen 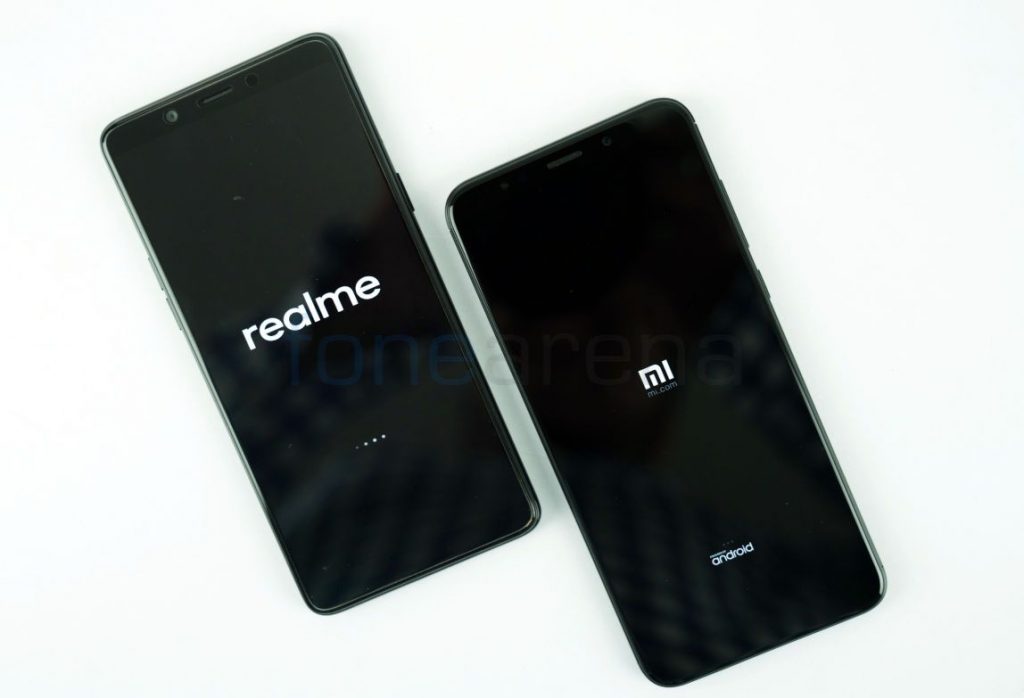 The Redmi Note 5, on the other hand, is shipped with the old Android 7.1.2 (Nougat) out of the box with MIUI 9 on top. MIUI 9 adds a lot of features including improved notifications, split screen, improved apps like Mi Drop to transfer of files between any Android device without requiring an internet connection. It also has new App Vault feature that shows shortcuts to access apps quickly by when you swipe left in the home screen. There is also App lock that lets you protect your apps with a password and the dual apps feature lets you run an app like WhatsApp with two different accounts at the same time.

In the end, UI is a subjective topic, but with the latest Android version and some customization on top gives Realme 1 an edge over Note 5.

The Realme 1 is powered by Octa Core MediaTek Helio P60 (MT6771) 12nm processor (Quad 2GHz Cortex A73 + Quad 2GHz Cortex A53 CPUs) with 800MHz ARM Mali-G72 MP3 GPU under the hood. On our day-to-day usage, the device did not miss a beat and we haven’t seen stutter, hang or lag. It processes everything regardless of what you throw at it, thanks to 6GB RAM (In our unit). We also did some intense gaming on this phone, and we found no problem at all since most games like PUBG was smooth, and the graphics were good as well.

The Redmi Note 5 is powered by an Octa-Core Snapdragon 625 Mobile Platform with eight ARM Cortex A53 cores clocked at 2.02GHz per core and has 3GB or 4GB of RAM depending on the model, same as the predecessor. The performance is good without any lags, but the company could be gone with a faster Snapdragon 630 SoC. It gets a bit heated on intensive gaming and 4G data use, but it doesn’t too hot to handle.  In this department, the Helio P60 is faster than the Snapdragon 660 chipset, which makes Realme 1 as the clear winner here. 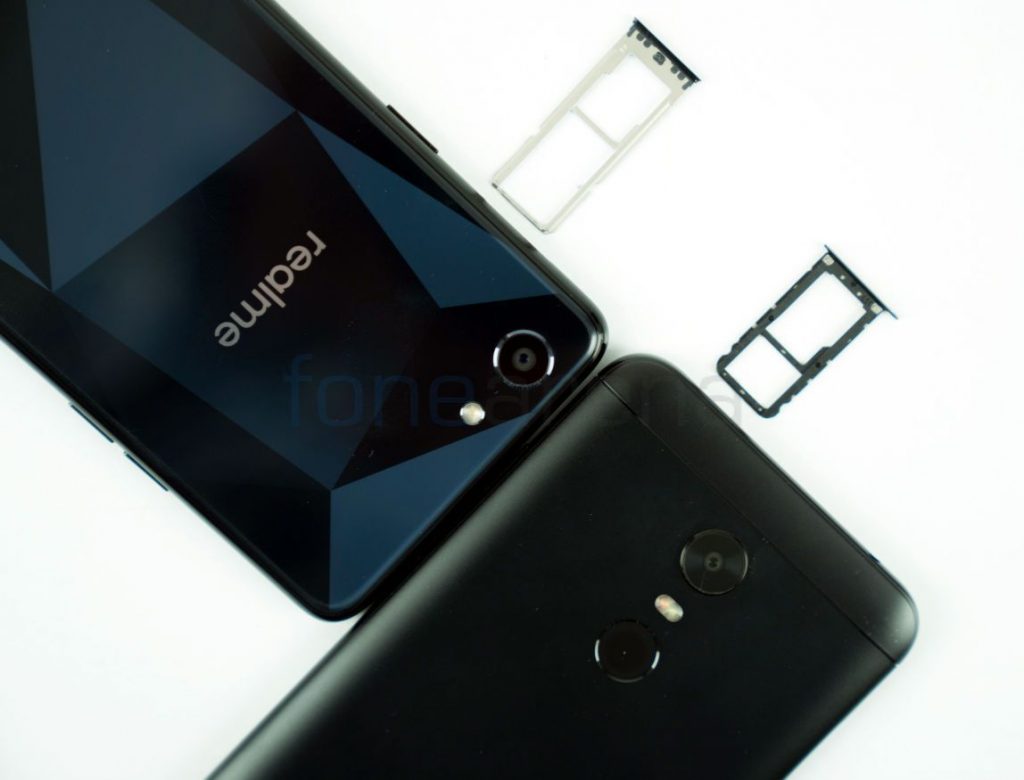 Both the smartphones support connectivity options including 4G VoLTE, WiFi 802.11 ac (2.4GHz + 5GHz), Bluetooth 4.2, and GPS. The Realme 1 has dedicated dual SIM and microSD card slots with dual VoLTE support that lets you use 4G and VoLTE on both the SIMs and switch between them easily. This puts Realme 1 in driver seat yet again. 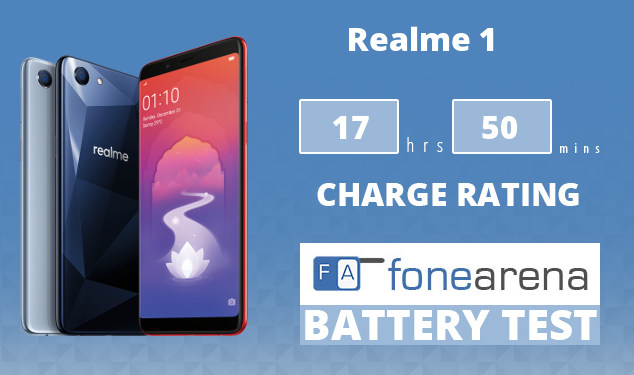 The Realme 1 is powered by a 3410mAh battery that uses AI battery management that learns your patterns and habits over time and snoozes or closes inactive apps to save power. the battery life was fantastic and got us throughout the day on a single charge, even on heavy usage. At the end of the day, on a casual usage, we got around 30% charge remaining, thanks to AI battery management.

The Xiaomi Redmi Note 5 is powered by a 4000mAh built-in battery without any fast charging technology. The battery life is good and lasts for a whole day with heavy usage. In this department, both the phones perform equally, even though the battery capacity is high on Redmi Note 5.

As expected, in this comparison, Realme 1 stays ahead in most of the department at a lesser price compared to its rival Redmi Note 5. The Realme 1 is a new smartphone under budget to mid-range segment offering a number of strong features. Under Rs. 10,000, it is one of the better options available in the market, which is well worth a look. It is available exclusively from Amazon.in starting at Rs. 8,990.