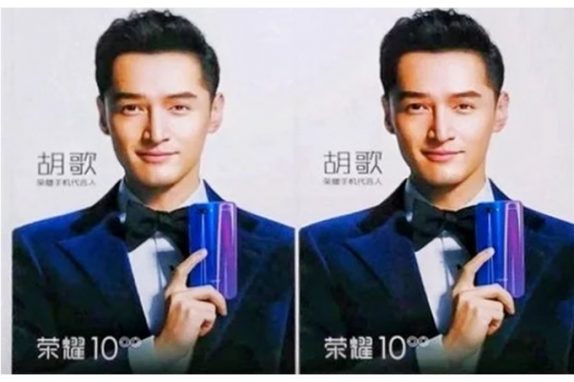 Honor has scheduled an event in London on May 15th where the company is expected to introduce the Honor 10 flagship smartphone. While the phone has been in the news for quite some time, today we have our first glimpse at the phone thanks to the promotional image that has been leaked in China. The poster of the handset has been spotted in the wild.

Going by the leaked poster image, for now, only the back of the phone is visible,  the Honor 10 also has a very distinct multi-color pattern on the phone’s back reminiscent of the recently launched Huawei P20and P20 Pro, but not identical though. The phone features a dual-rear camera, but there is no fingerprint sensor present on the back, meaning that it might be placed on the front below the 5.8-inch FullView display.

Just like the Huawei P20-lineup, the Honor 10 is also expected to have a top-notch on the front. According to the recently surfaced specifications, the Honor 10 is expected to be powered by the Kirin 970 SoC, 6GB RAM, and 256GB of storage. It is expected to run on Android 8.1 Oreo with EMUI 8.1 on top. It is also widely rumored that the company would announce the phone in China later this month and globally on May 15th in London.