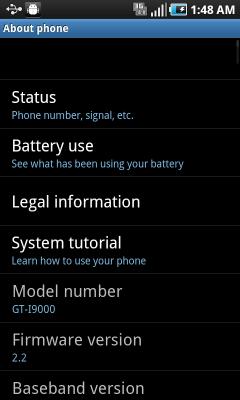 After the Beta versions of Android Froyo 2.2 for the Samsung Galaxy S was leaked, we heard news that the update will be brought out officially by Samsung in October. Now Samsung seems to have kept their word as tweets, discussion and pictures show users having the new update on their phones.

The update can be downloaded from the latest PC version of Samsung’s Kies software. So far no changelog has been released and no users have reported on the update.

So those of you who have tried it, please share your news with us regarding the changes.

The Android 2.2 upgrade will be available via Kies, Samsung’s unique in-house software upgrade program. Kies can be downloaded at the Samsung mobile website (http://www.samsungmobile.com).

– Adobe® Flash® Player 10.1: Allow the web browser to make full use of the whole web

The Android 2.2 upgrade will be available from the mid of October 2010 in the Nordic region and gradually rolled out to other European markets, Southeast Asia, the Middle East Asia, North America, Africa and rest of the world.