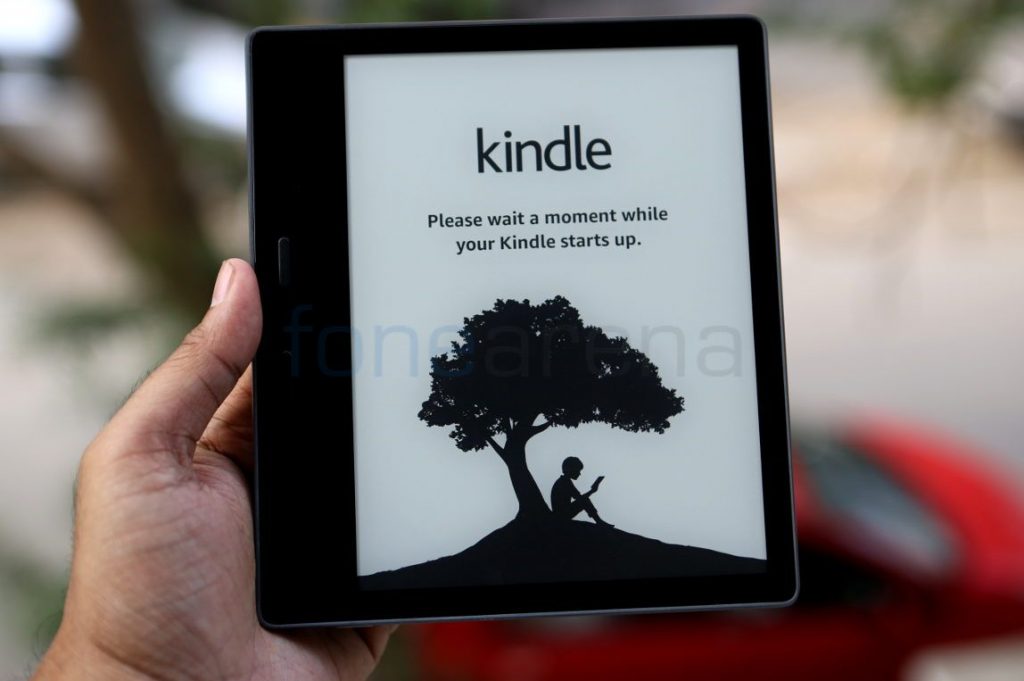 Amazon launched the Kindle Oasis 2 back in October last year. This is the successor of the first Oasis that was launched in early 2016. The latest top-end Kindle is waterproof, doesn’t come with a battery case like the first and has a large 7-inch screen for the first time. Does it live up to the expectations? Let us dive into the review to find out. 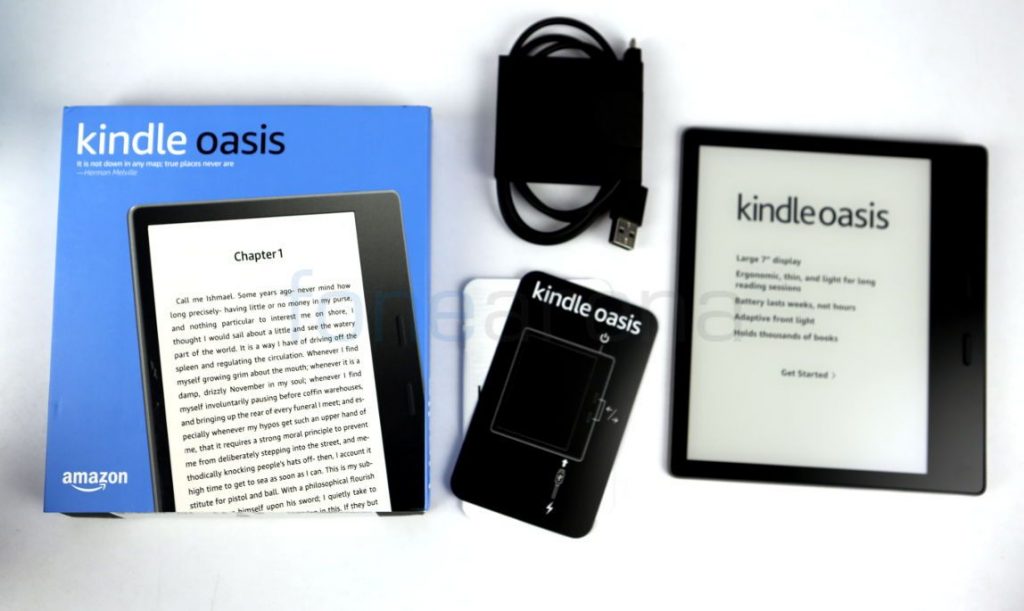 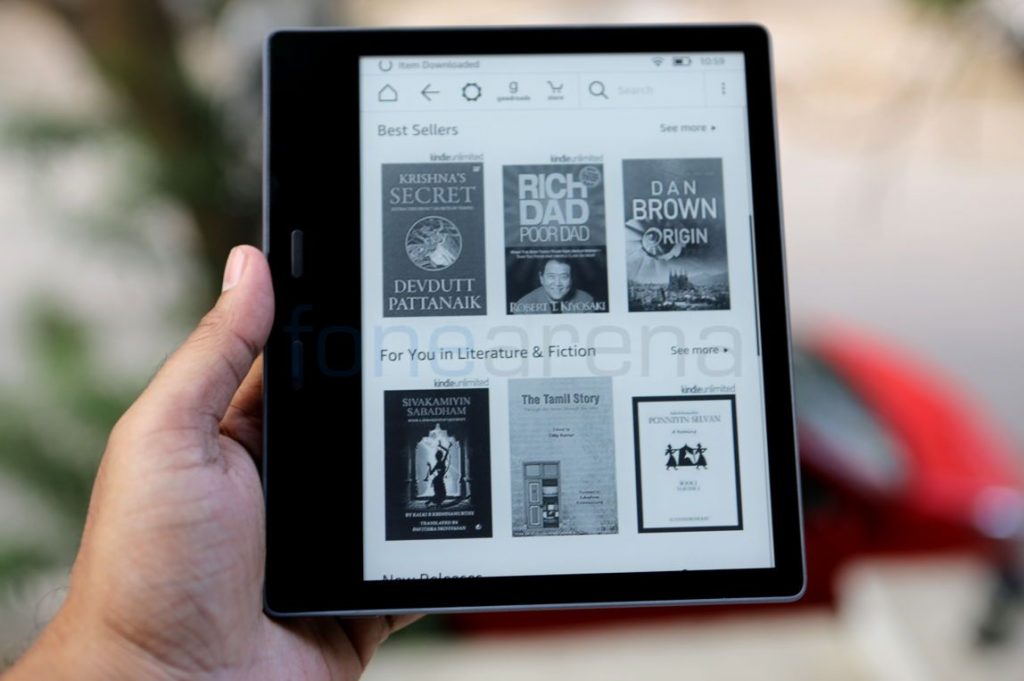 The second-generation Kindle Oasis has a familiar design with hand grip as the first one that has hardware page-turn buttons, which are now slightly smaller. This has a large 7-inch screen that is the main difference you notice. Bezels around the screen are smaller than the predecessor, but you have a lot of space near the hardware buttons that lets you hold the Kindle comfortably.

By default, the top page-turn button lets you turn a page forward and the bottom button for backward, which you can reverse from the reading options in the settings. I use bottom button for forward, which is more comfortable when holding the Kindle with a single hand. I prefer PagePress buttons on the Voyage that gives you haptic feedback when pressed. 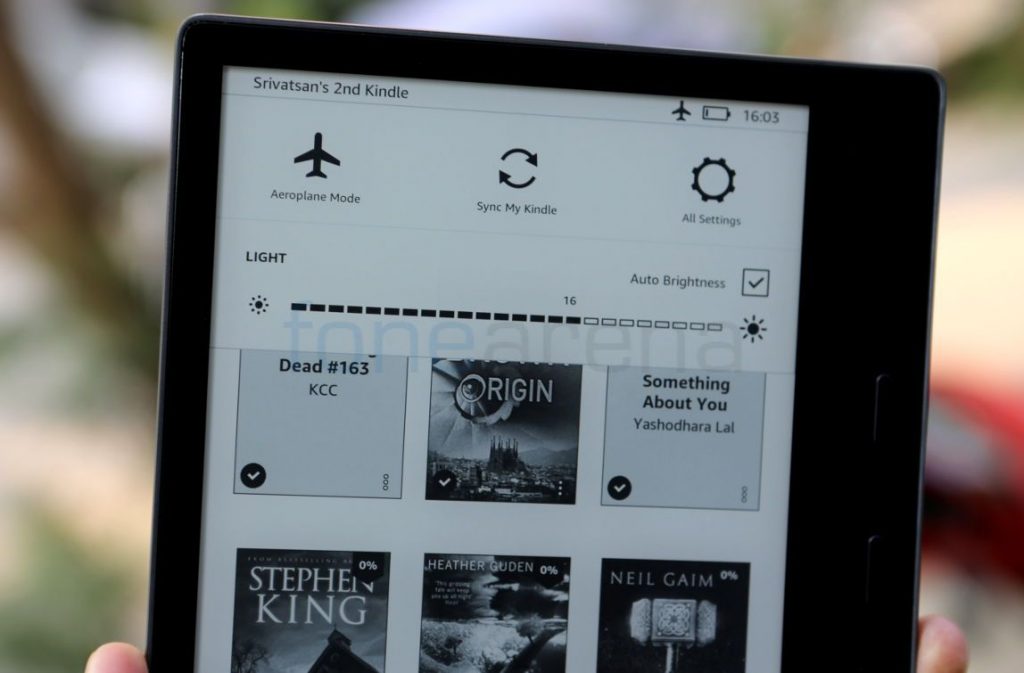 It also has two ambient light sensors next to the buttons for automatic brightness adjustment depending on the light in your surroundings. This was absent in the first Oasis, even though it was included in the first Kindle. 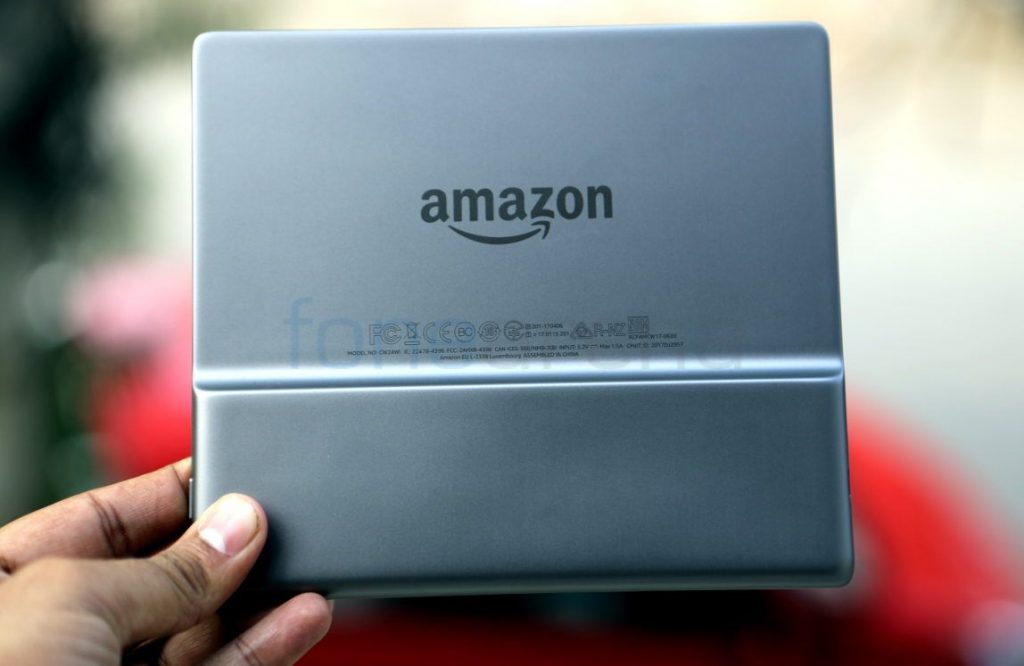 It is the first waterproof (IPX8) Kindle that can stand immersion in up to 2 meters of fresh water for up to 60 minutes. This was the most expected feature on Kindle since Kobo released the first Waterproof Aura back in 2014. 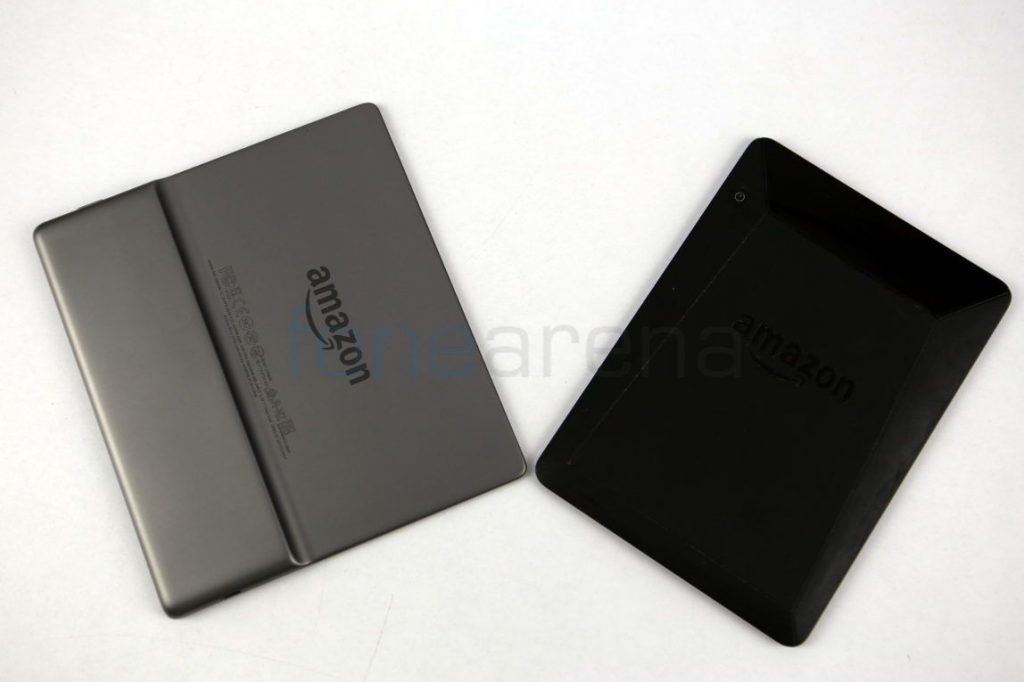 Since the new Oasis has a large screen, it is bigger compared to other Kindles with a 6-inch screen. This makes it hard for single-handed usage compared to the original Oasis and even the Kindle Voyage. Overall the build quality is the best without any doubt, but it might be bulky for some who are used to smaller, light-weight Kindles. 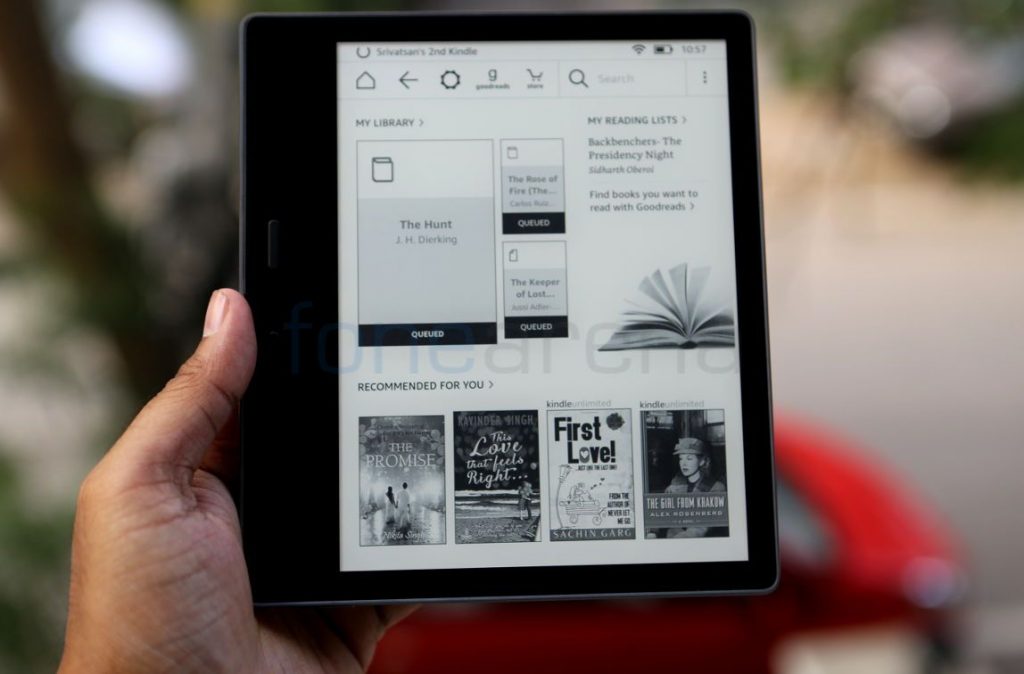 The new Kindle Oasis has a large 7-inch display with resolution of 1680 × 1264 pixels. It uses front light technology similar to other Kindle models. The display is bright enough even to read under bright sunlight without refection. It has flush screen without any gaps. 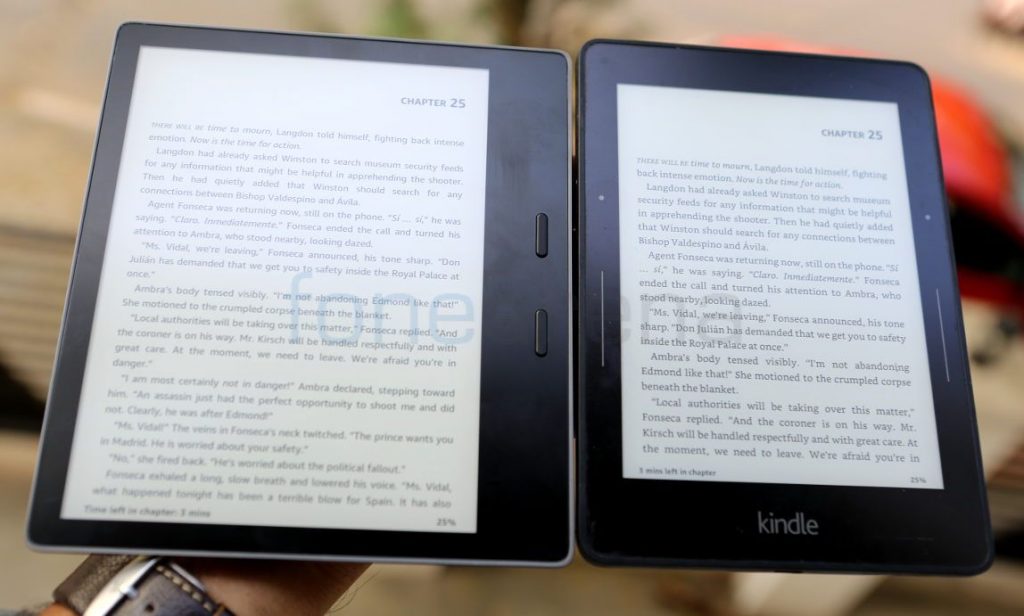 Amazon says that the 7-inch screen can fit 30% more word for fewer page turns, compared other Kindles with a 6-inch screen. Since this has accelerometer similar to the predecessor, it can recognize when the Oasis is flipped over and automatically changes the orientation of the page accordingly. 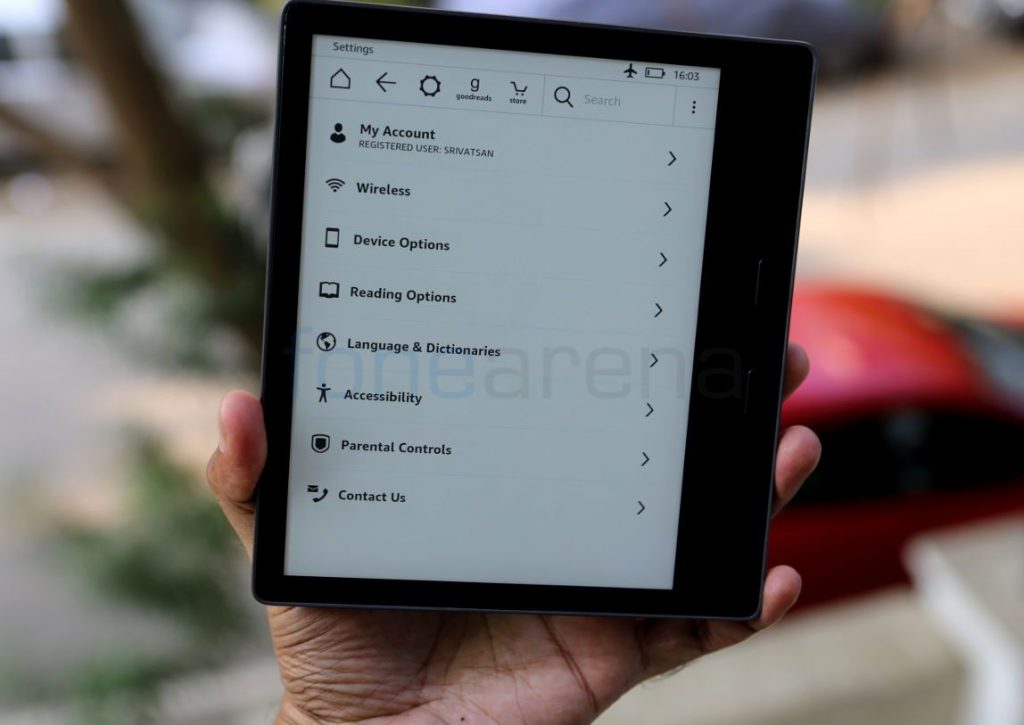 The Kindle Oasis was introduced with 5.9.2 software, later is got the 5.9.2.0.1 that brought option to disable the touch screen and use only the page-turn buttons. This can be enabled from the menu when you are reading a book and it resets when you put press the power button and wake up the Kindle again.

Other features are similar to the first Oasis including option to arrange items in grid or list view, arrange book based on recent, title and author, option to customize fonts, adjust font size, parental controls and more. It also has invert black and white on the display and new enlarged display option that lets you increase the size of items like the menu bar, text on the home screen and library as well as the book icons.

It also has Audible built-in so you can listen to audiobooks and easily switch between reading and listening on Bluetooth headphones or speakers, but sadly audible is yet to launch in India. However, you can use the VoiceView Screen Reader from the accessibility settings for reading, but it is machine which reads so it feels like a robot reading.

It lets you search using Wikipedia and also has the experimental browser that you can use when you are connected to the internet. It has WiFi 802.11 b/g/n support and is also available in 3G version with built-in 3G and EDGE/GPRS support. The WiFi version has 8GB of storage compared to 32GB in the 3G version. You get 6.2GB of free storage out of the box. 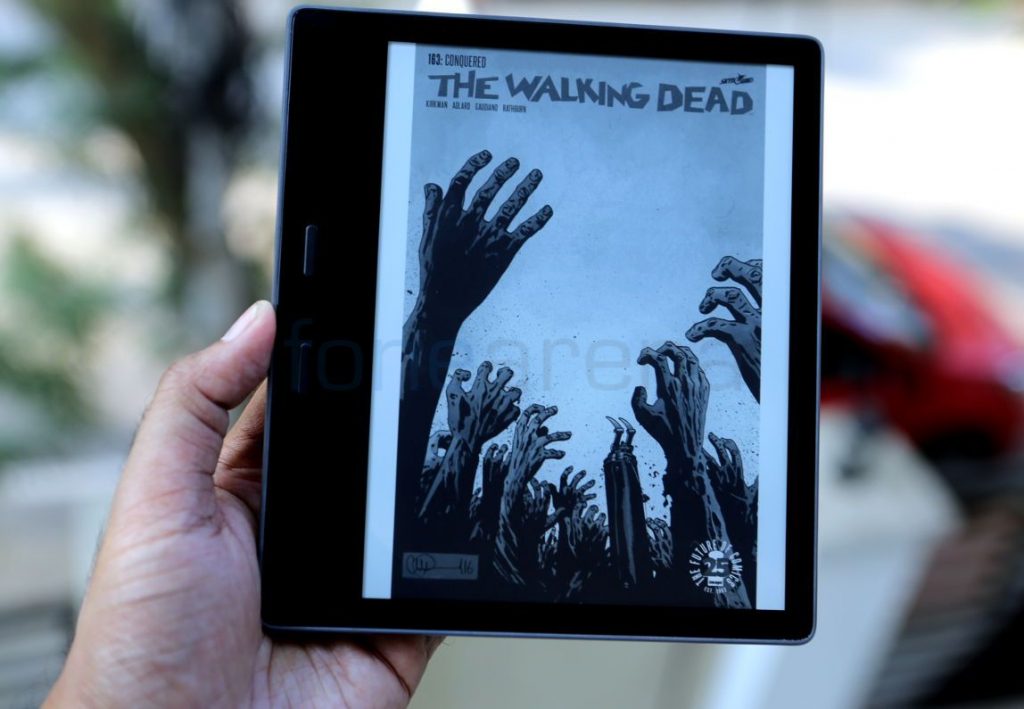 Coming to the performance, the new Oasis is powered by dual-core 1GHz NXP i.MX7D processor compared to Cortex-A9 chip in the last Oasis. The performance is good and the page turns are fast compared to the predecessor, but it takes about four seconds to put the Kindle to sleep or wake it up from sleep by pressing the power button.

Coming to the battery life, Amazon promises up to six weeks of battery life on a single charge, if you read half an hour daily with wireless off and the light setting at 10. This might vary depending on your usage, but it is still better than a tablet.

At a starting price of Rs. 21,999, the second-generation Kindle Oasis is slightly cheaper than the first one that was launched starting at Rs. 23,999. It comes with a better design, offers long battery life without any cover and is waterproof. The water-safe fabric covers in Indigo, Charcoal and Sandstone colors cost Rs. 2999 and premium leather covers in Black and Merlot colors cost 3,999 additionally. It is available from Amazon.in.

If you need a waterproof e-reader and can spend a premium just to read books, go for it, otherwise there are a lot of cheaper Kindles, including the 2015 Paperwhite that is available at half the cost . To summarize, here are the pros and cons of the new Kindle Oasis 2nd Generation.