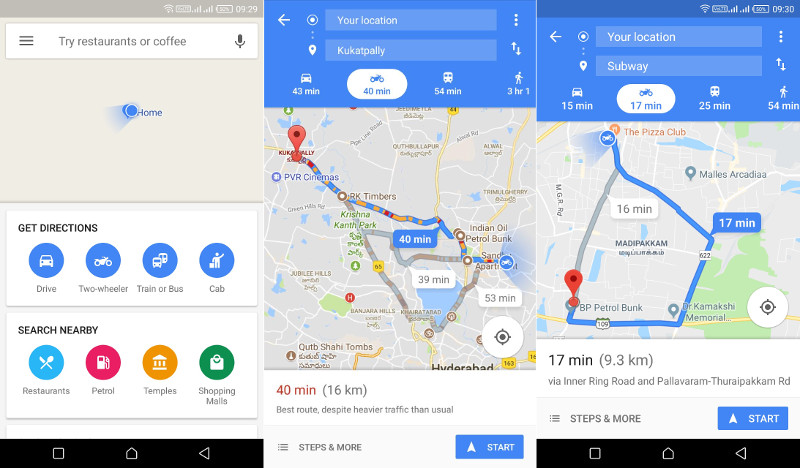 At the Google For India 2017 event today, apart from announcing Android Oreo Go edition and launching new apps, Google has announced new Two-wheeler mode in Maps for India. This is the India-first feature which is debuting in the country before it goes to other parts of the world. The new two-wheeler mode is placed alongside the other modes; Car, Foot, and Train that are present.

This mode is aimed at providing two-wheeler riders in India with better navigation and directions that are best suited for them and their vehicle to travel. It makes total sense that Google is launching such a feature first in India, as it is the largest two-wheeler market in the world. Two-wheeler mode in Maps shows trip routes that use “shortcuts” which are not accessible to cars and trucks.

The mode also provides with customized traffic and arrival time estimations and will also show major landmarks on the route map since most of the two-wheelers rely on that. Rest of the Google Maps feature like traffic situations, lanes, voice navigation are present. Two-wheeler mode is already available on Google Maps for everyone in the country.

India is the world’s largest two-wheeler market and the navigation needs of these millions of riders are different from automobile drivers. Two-wheeler mode in Maps gives routes that use shortcuts not accessible to cars. It also provides customized traffic and arrival time estimations.