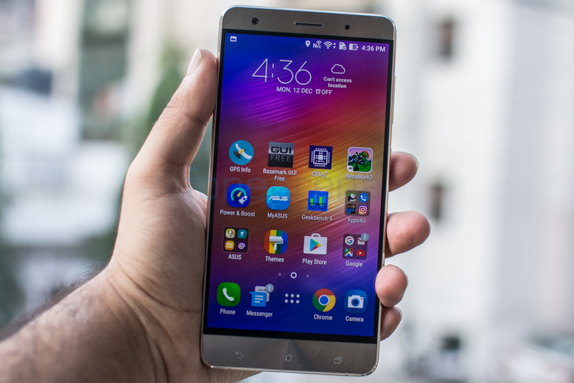 A couple of months back, Asus took it upon itself to introduce a slew of new devices under the Zenfone moniker. Since then we’ve reviewed the mainstream Zenfone 3 , the battery centric Zenfone 3 Max, the absolutely massive Zenfone 3 Ultra and even the entry-level Zenfone 3 Laser. There’s one device though that eluded our grasp. The highest specced Zenfone ie the Zenfone 3 Deluxe is now available to us and we’ve been spending some time with the handset. Read on to find out what we think about the device.

The Zenfone 3 Deluxe is big on the spun metal design pioneered on the company’s laptops. The front of the device sports a massive 5.7 inch display. We’ll talk about this later on in the review but already, it sets the phone apart. With the Note 7 out of the picture, the 5.7 inch panel on the Zenfone 3 Deluxe makes it amongst the largest devices available this side of the 6 inch plus giants.

The 5.7 inch screen here is set with marginal bezels on all sides. These work towards increasing the dimensions of the phone making it a bit unwieldy to hold. The black bezels are further flanked by golden bezels. Above and below the screen these have the spun metal design we’d talked about earlier. An 8MP front facing camera sits here while below the screen you’ll observe three capacitive keys corresponding to back, home and menu.

Moving on, you’ll observe that the USB C charging port is located at the bottom while the 3.5mm audio jack is up top. The volume rocker and power buttons are placed on the right hand side. Despite the large size of the phone, we found the ergonomics to be pretty good and it was never hard to reach out to the buttons. Meanwhile the hybrid SIM slot is placed on the opposite side of the phone. 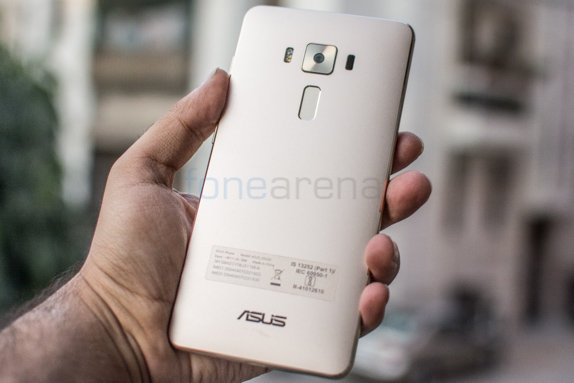 Coming to the back of the device, there’s a raised 23MP camera module set amidst the all metal design. Worth noting is that there are no cutaways for antennas with the Zenfone 3 Deluxe being amongst the first to implement this. A laser auto focus module and dual LED flash are placed on either side. For a phone that measures 156.4 x 77.4 x 7.5 mm, having a rear mounted fingerprint reader is really not the best option. One handed, it is always hard to reach out and activate the device. All in all, the Zenfone 3 is a solidly built device that tends to err on the side of being too big. This is partially explained by the large display but we wish that Asus had worked to minimise the bezels further.

On to the software then. The Zenfone 3 Deluxe like all other Zenfones before it continues using Zen UI on top of Android 6.0. From an interface perspective this is homologous with practically every device in the series

The three level app paradigm holds on to the app drawer unlike the many iOS inspired interfaces. The lockscreen has a date & time widget with three customizable shortcuts below it. You can also drop down into the camera from here. Swipe up and you’ll get access to the homescreen where you can place widgets and a full range of app shortcuts. A persistent bar lies at the bottom with a centrally placed shortcut to drop you into the app drawer. 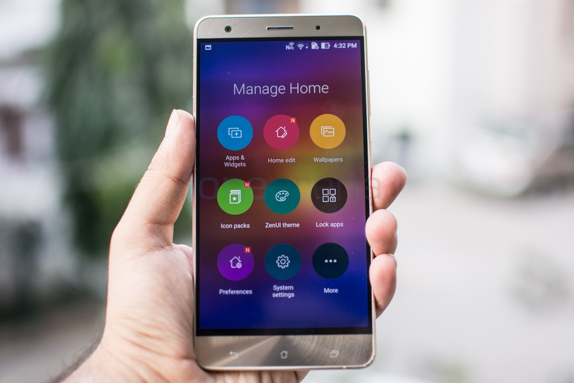 We like the level of customisation capabilities offered by Zen UI. Beyond the usual wallpapers and widgets, Zen UI also lets you use themes and icon packs. It is also possible to lock certain apps to allow use exclusively through the fingerprint scanner.

One gripe of ours that Asus just doesn’t seem to fix is the sheer amount of bloatware. There’s well over 23 pre-installed apps which by any standard is way too much. Worse still, not all of these apps can be uninstalled.

With a Quad-Core Snapdragon 820 processor and Adreno 530 GPU, the Zenfone 3 Deluxe is handily the most powerful device ever in the series. Add to that 6GB of RAM and at least on paper, you’ve got a veritable beast of a handset. Real world performance too adds up and we never experienced any show stopping concerns with the phone. The Zenfone 3 Deluxe works just as you’d expect from a device of its calibre and everything from gaming to photo editing and other heavy tasks work absolutely fine. Our only cause for concern however revolved around how hot the phone tends to get. Even with simple tasks like shooting photographs, the phone would heat up drastically. We hope that Asus will be able to sort this out with a software update but as it stands, heating issues with the phone are a major concern. We’ve included some benchmark scores below if you are looking for comparative performance. 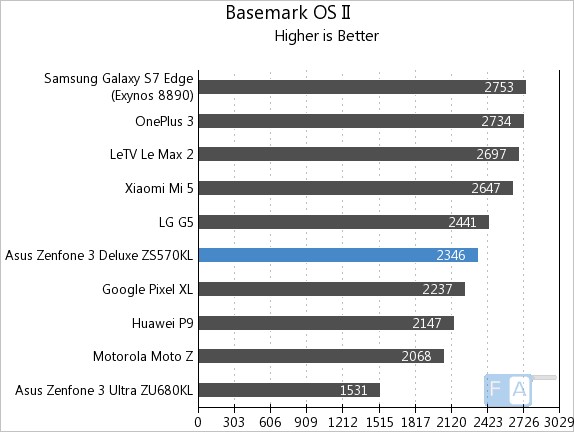 In the Basemark OSII benchmark, the Zenfone 3 Deluxe scored 2346 points placing it in the middle of the test bench. The phone performs better than the Google Pixel XL but lower than the likes of the Galaxy S7 Edge. 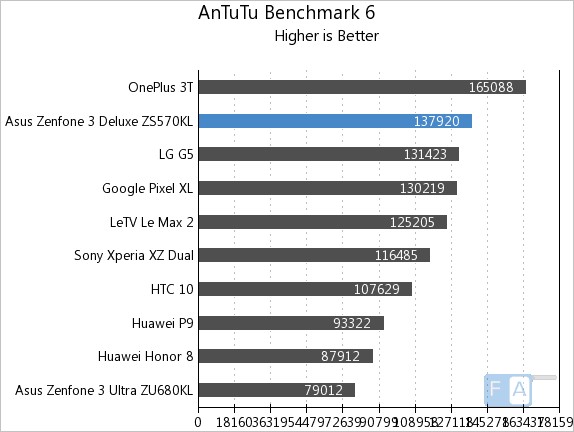 In the AnTuTu benchmark, the Zenfone 3 Deluxe ranks behind only the OnePlus 3T and scores 137920 points. 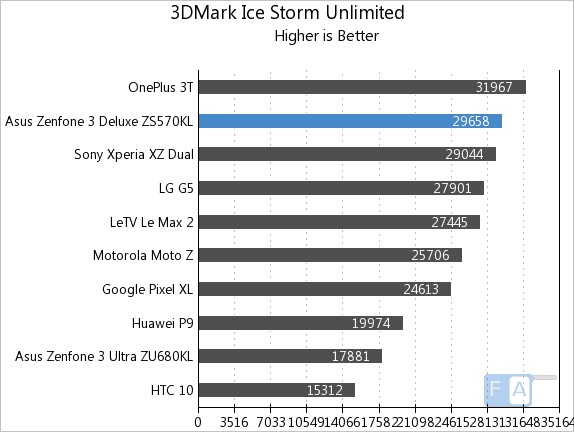 While the world moves on to ultra high-resolution displays, the Zenfone 3 Deluxe sticks to a 1080p panel which is now stretched further across a 5.7 inch screen area. This will certainly disappoint pixel peepers but for most users, this is not a cause for concern. 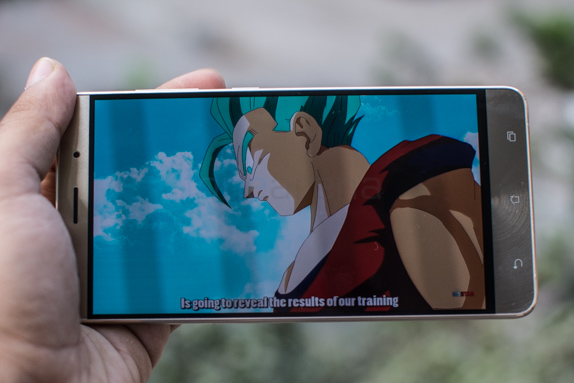 The Super AMOLED display is very bright and vibrant. It tends to veer towards oversaturation which is something we’re personally not too fond off however it does tend to make the colors pop. Photos and media look fantastic on the screen and you’ll likely be quite satisfied with the color rendition. Brightness levels are good enough for outdoor visibility but the highly reflective surface definitely proves to be a hindrance. There’s a Gorilla Glass 4 layer on top of the display for protection.

For all the talk about camera capabilities, the actual performance on the Zenfone series of devices usually falls a bit short of exemplary. This time around, the phone comes equipped with a 23MP rear camera with dual-tone LED Flash, Sony IMX318 sensor and f/2.0 aperture. 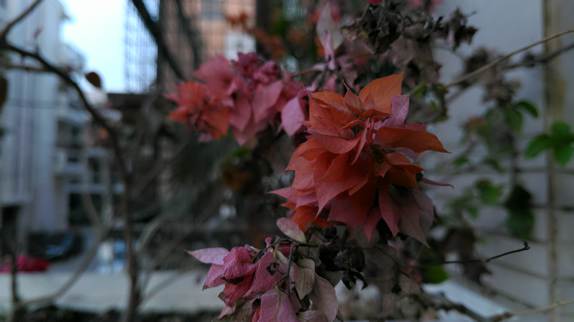 Taking the camera out for a spin revealed definite improvements in the camera department. The phone retains a fair amount of details though zooming in will reveal significant noise reduction processing. Low light shots and bright highlights are two areas where the camera somewhat struggles. To put it in simpler terms, the camera on the device is pretty good but generally falls short of the high expectations set by its competition.

Close up performance is one area where we found the device to be very impressive. The phone consistently managed to lock onto focus very quickly and accurately. The 4-axis OIS also helped us when shooting close up images of flowers and other such objects. We’re fairly satisfied with the camera here though it is far from the best in the price range. The 8MP front facing camera usually takes soft and washed out images. Part of the popular ‘beautifying’ algorithms increasingly seen in smartphones, you can play around with settings to reduce the effect to a degree.

Connectivity options on the Zenfone 3 Deluxe include 4G LTE with VoLTE, WiFi 802.11 a/b/g/n/ac (2.4/5 GHz), Bluetooth 4.2, GPS and USB 3.0 Type-C. Unlike the Zenfone 3 Ultra, the Deluxe does not support DisplayPort over USB Type C alt mode which seems like a curious omission given the higher end specifications. Then again, hardly any other phone has the feature baked in so you can’t really hold it against Asus. The phone ships in a range of SKUs with storage starting at 64GB and going up to 256GB. Our 64GB unit had just about 50GB available at launch. The heavily customised interface clearly takes a toll here. You can further expand storage via a microSD card slot. There’s Dual SIM support too but unfortunately this is a Hybrid SIM slot so you’ll have to choose between the 2nd SIM or a microSD card.

The 3,000 mAh battery on the Zenfone 3 Deluxe just isn’t sufficient to power the fast processor and large 5.7 inch display for a full day. We usually had to top off towards the evening. This was with a pretty regular work load of multiple email accounts, phone calls, messages as well as social media usage. Screen on time hovered around the 3 hour mark which isn’t anything special. Compare this to other flagships like the Pixel XL which regularly cross the 5 hour mark and the Zenfone feels like a bit of a letdown.

Asus has improved a lot with this generation of Zenfone devices. The Zenfone 3 Deluxe in particular represents their foray into the flagship segment and truth be told, it is a pretty good attempt too. Unfortunately the competition is way too far ahead and without any defining feature, it is rather hard to recommend the Zenfone 3 Deluxe. 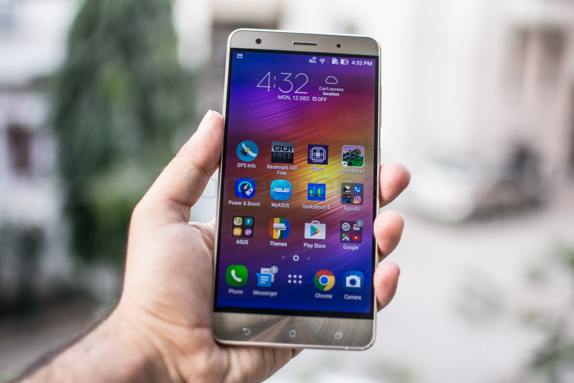