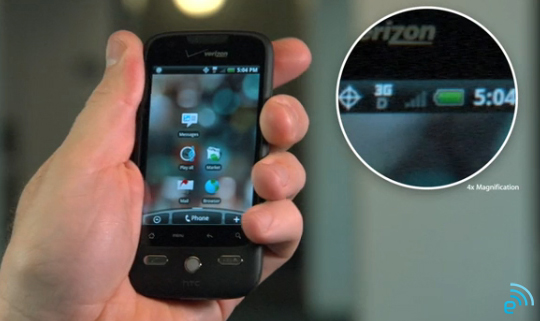 As you people know about the Apple press conference which was on Friday, in which Apple said that they will provide the cases and bumpers for free to avoid the reception problem, but Apple also said that the antenna problem also occurs in other phones, Apple mentioned Blackberry, Nokia, and HTC. Out of which we saw that BlackBerry and Nokia replied to Apple. Apple pointed out an antenna problem on the HTC Droid Eris.But HTC defends itself by saying that only 0.016% of DROID Eris customers complained about the reception problem, which is 34 times lower than the Apple 0.55%. HTC reply was expected because they want to maintain the confidence level of their customers. You can head over to this link over at Apple site, in which you will see Apple is blaming other phones on the reception issue.You can also see the image above, that if you hold the Droid Eris in a certain way then you lose the reception, but I never saw anyone holding their Droid Eris like that, it’s like Apple is trying to squeeze the Droid Eris.

I was a very big fan of Apple, but after seeing this blaming game, I am not happy with Apple anymore. Well, we saw the replies from everyone, so is Apple happy now? Will they blame Chinese mobile companies too ?