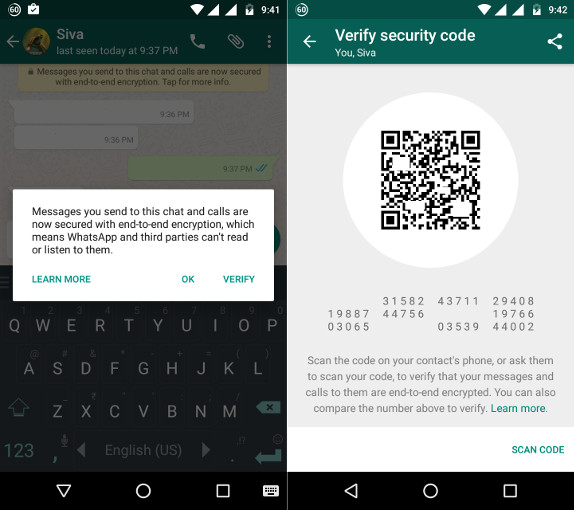 All the messages are secured with a lock, and only the recipient and you have the special key needed to unlock and read them. For added protection, every message you send has its own unique lock and key. All of this happens automatically: no need to turn on settings or set up special secret chats to secure your messages.

WhatsApp users additionally have the option to verify the keys of the other users with whom they are communicating so that they are able to confirm that an unauthorized third party (or WhatsApp) has not initiated a man-in-the-middle attack. This can be done by scanning a QR code, or by comparing a 60-digit number. WhatsApp servers do not have access to the private keys of WhatsApp users.

WhatsApp’s end-to-end encryption is developed in collaboration with Open Whisper Systems. You can read the in-depth technical explanation in the white paper here. WhatsApp recently announced that it has over 1 billion monthly active users, which translates to one in seven people on Earth.

Regarding the new end-to-end encryption, WhatsApp co-founder and CEO Jan Koum on the official blog, said:

Encryption is one of the most important tools governments, companies, and individuals have to promote safety and security in the new digital age. Recently there has been a lot of discussion about encrypted services and the work of law enforcement. While we recognize the important work of law enforcement in keeping people safe, efforts to weaken encryption risk exposing people’s information to abuse from cybercriminals, hackers, and rogue states.

While WhatsApp is among the few communication platforms to build full end-to-end encryption that is on by default for everything you do, we expect that it will ultimately represent the future of personal communication.

The desire to protect people’s private communication is one of the core beliefs we have at WhatsApp, and for me, it’s personal. I grew up in the USSR during communist rule and the fact that people couldn’t speak freely is one of the reasons my family moved to the United States.

Today more than a billion people are using WhatsApp to stay in touch with their friends and family all over the world. And now, every single one of those people can talk freely and securely on WhatsApp.