Micromax has grabbed the number three spot in the Russian smartphone market according to the latest research from Counterpoint’s Market Monitor program. The homegrown smartphone handset maker has a market share of over 9% in Q4 2015.

This is an exciting time for us at Micromax as we are a step closer to our vision of becoming the part of the top five handset players in the world. Russia has been one of our focus markets in the past two years and we have seen a great consumer acceptance for the brand in the market.  With our focus on affordable smartphone segment, 4G and 3G, we will continue to work towards consolidating our position in the Russian market. 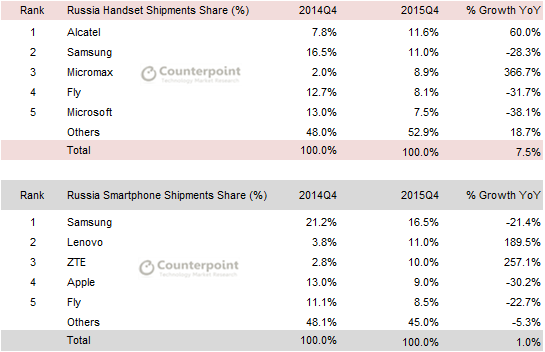 Micromax had entered Russia in January 2014 with the launch of Canvas Beat and Canvas Social. Overall the Russia mobile phone market grew by 8% annually and 27% sequentially during Q4 2015. Smartphone shipments remained almost flat registering a 1% growth annually.  Alcatel One Touch, became the number one mobile phone brand during the quarter, surpassing Samsung, thanks to stronger demand for its feature phones in Q4 2015. Apple saw demand for its iPhone slow due to the weakening economy and stronger Ruble, making it quite an expensive offering.