India has become the second largest smartphone market in the world, according to Counterpoint’s Market Monitor service. The country surpassed US in terms of active unique smartphone user base with over 220 million users.

During CY 2015, Indian smartphone shipments grew 23% YoY to cross 100 Million units milestone. The report said that more than 40% of the mobile phones shipped were smartphones. Owing to the growing investment in India from national and international smartphone makers, almost half of mobile phones sold during the quarter were “Made in India”. Over 20 mobile phone brands are now assembling their phones in India and giving further boost to the ‘Make in India’ initiative. 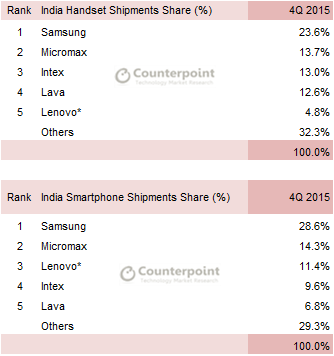 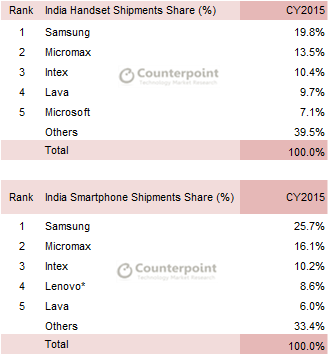 Lenovo including Motorola raced to third position in smartphone segment for the first time ever in India surpassing Intex with a market share of 11% during the quarter. Apple hit 2 Million units sale in a calendar year, first time ever in India led by a strong fourth quarter. The report said that 2016 is going to be a highly competitive year as brands such as Huawei (with Honor), LeTV and Vivo expand with aggressive offerings to compete head-on with other Indian and Chinese players