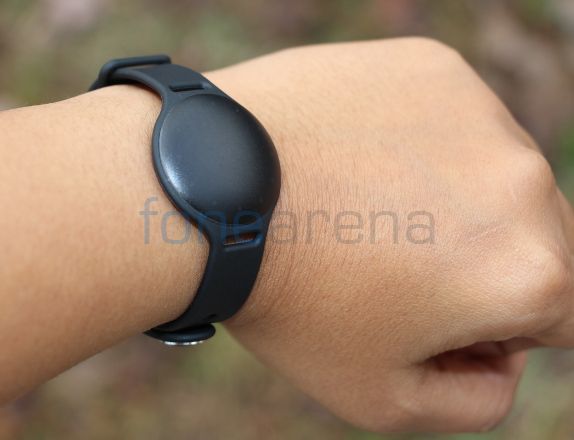 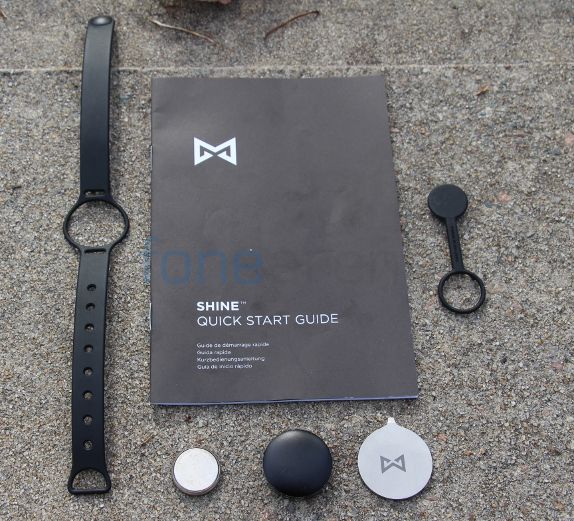 The Misfit Shine box comes with :- 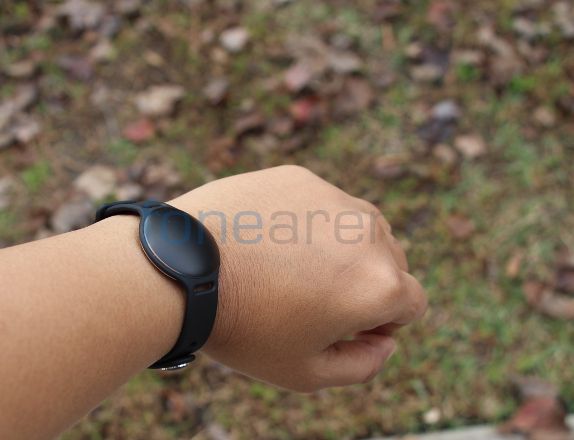 Misfit is basically a fitness tracker and sleep monitor that is made of anodized aircraft grade aluminium and has no display and buttons. The round device has two silver rims around it. Tapping the top of the device activates a circle of LED lights which are embedded into the metal itself. These light show how far along you are in respect with your daily activity goals. 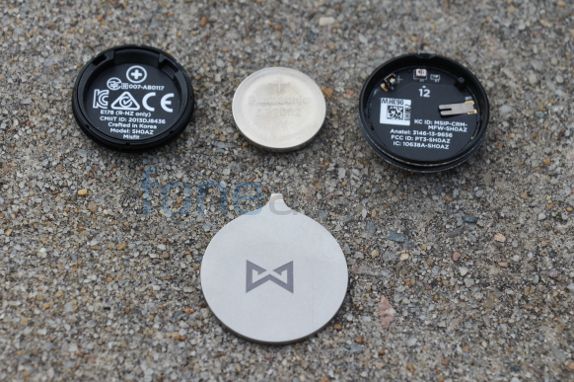 You will need a battery tool that comes with the box to open the Misfit Shine. After opening the device you will have to place the battery inside the two discs as per instructions from the manual, put them back together and you are good to go. The battery on the Shine is a coin-cell battery that requires no charging and is replaceable. The Misfit Shine is sleek and measures 27.5×3.3×27.5mm, while it weighs 9.8 grams. It comes is black, dark grey, silver and blue topaz color options.

On the rear of the Misfit Shine has a 12 logo that helps you show which way up the fitness tracker should be placed in your watch strap for accurate clock readings. 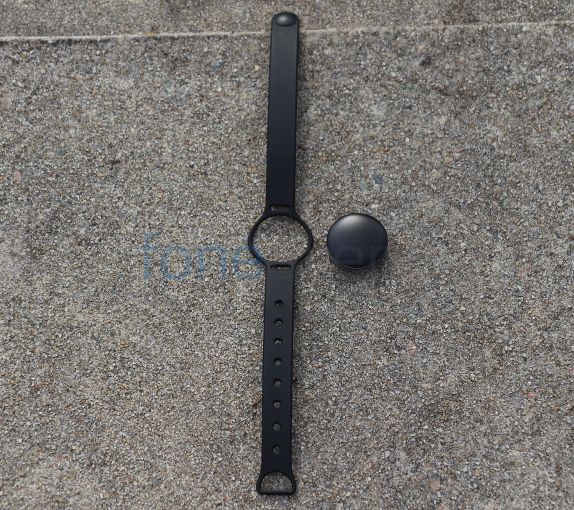 The Shine’s accessories are another solid aspect of its design. You can wear the device like a watch with the help of the sleek rubber band and carry out the usual activities. The rubber sport band is flimsy but the clasp fits well around the Shine making it comfortable to wear. 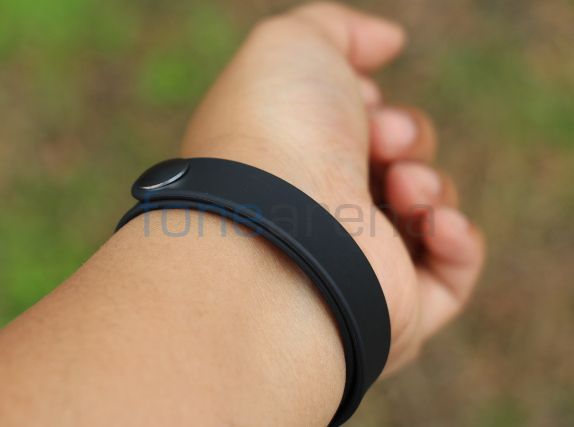 Other fitness trackers in the market, especially Fitbit come with broader bands that may not always be appealing for people with smaller wrists. I like the sleek rubber band as it feels compact and light but again it is not very high maintenance and does the job of holding the Shine just fine . 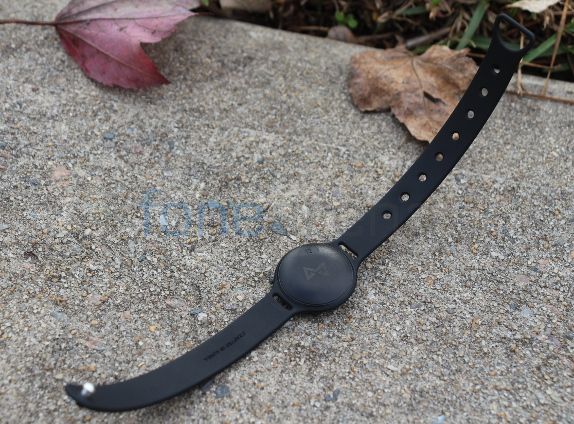 You can also buy higher-end leather wrist band for the Shine. 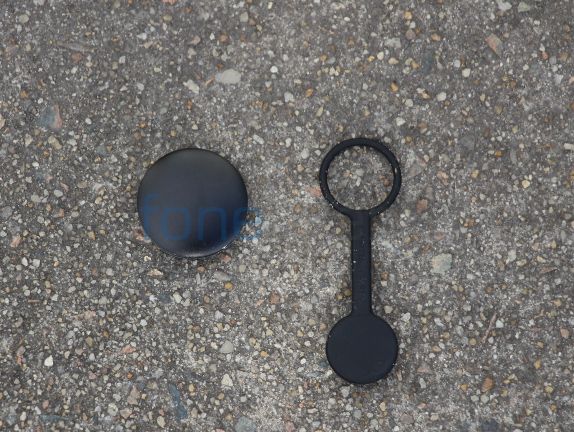 One of the best features of the Shine is that you can use the device as an accessory. Along with the rubber sport band, the Shine comes with a clasp that makes it carrying around even easier. The rubber clasp slips around the Shine and the other part of the clasp is magnetic and can be attached to a piece on clothing like shirt, trouser, belt and shoes. 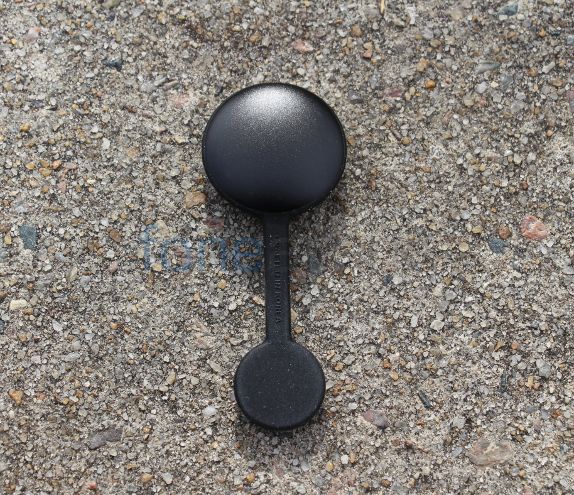 There are 12 LED lights on the device that show up when you double tap it. 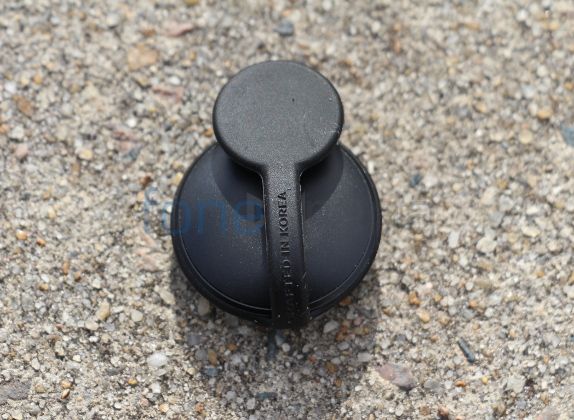 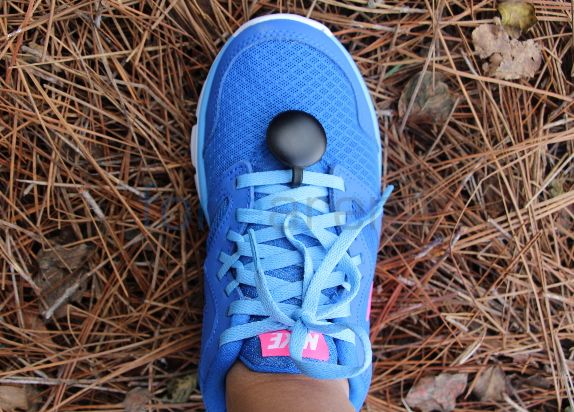 I tried using the Shine with the magnetic clasp band by attaching it to my shoes while jogging and it stayed intact the whole time. Ladies, you can even wear Shine as a pendant by attaching it to a chain that is sold separately on the Misfit Store. 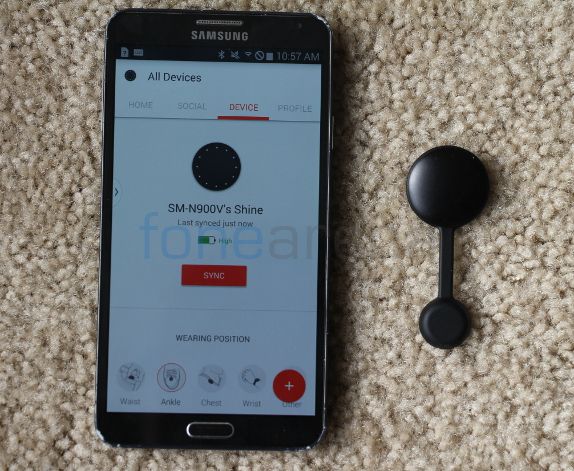 As the Misfit Shine does not come with a display, all your stats and daily tracking is seen via the Misfit app. The device is compatible with iPhone 4S and higher, Android 4.3 and higher and Windows 8.1. We tried the Android app in our testing period. 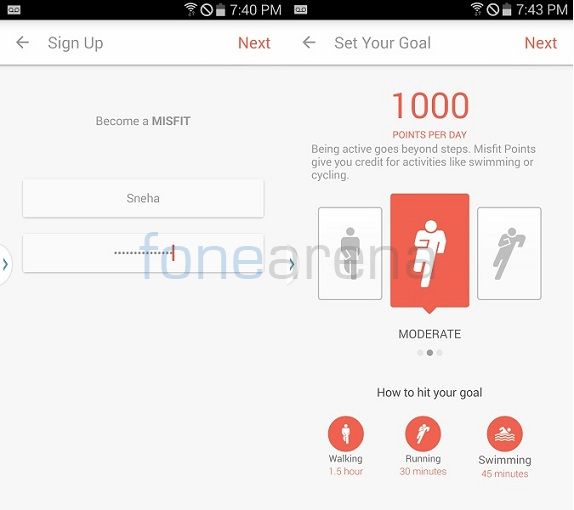 After downloading the app, you will have to switch on Bluetooth, sync your Shine and select the wearing position. Users will have to set up an account by adding their personal information like name, age, height and weight. 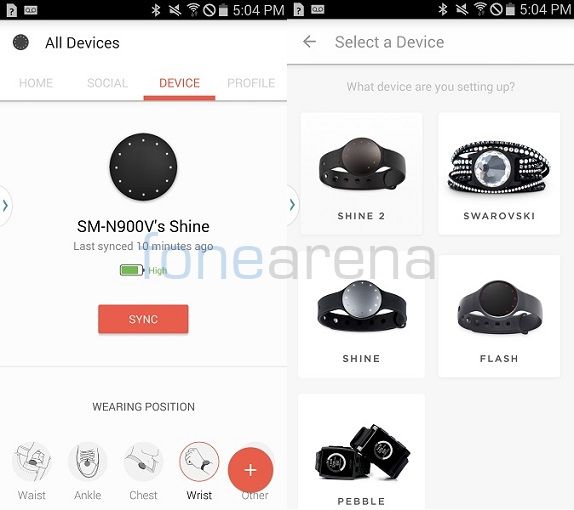 Misfit Shine measures your steps, calories burned, distance covered and sleep quality and duration. Next up you will have to set up your goals for three pre determined activities – walking, running and swimming.  You can even add your own activity like cycling, soccer, dance, tennis, basketball, yoga and so on with the floating ‘+’ button at the bottom corner. 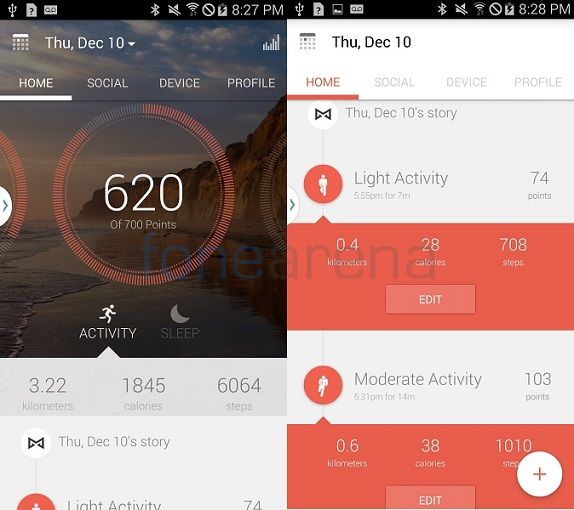 The app translates your daily activity into stats like distance, calories and steps. When you double tap your Shine, it will activate indicating your daily goal progress by showing the LED lights. However, we felt that the LED’s are not too bright and does not show your daily progress accurately. The Shine has a three-axis accelerometer inside that tracks movements however it lacks an altimeter that can track stairs climbed, a feature we have seen on FitBit HR.

Coming to the UI, I felt the app is too crowded with menus and sub menus. I am not a fan of the point system which it uses to record all your activities. The app shows your daily progress into graphs once you set basic goals in terms of points. You can see the daily points on the big round dial that has an orange colored rim which also shows how near are you from your goal. Swiping left will show your stats for a day before and you can choose to see your progress by day, by week and by month. It also depicts the daily progress with graphs. 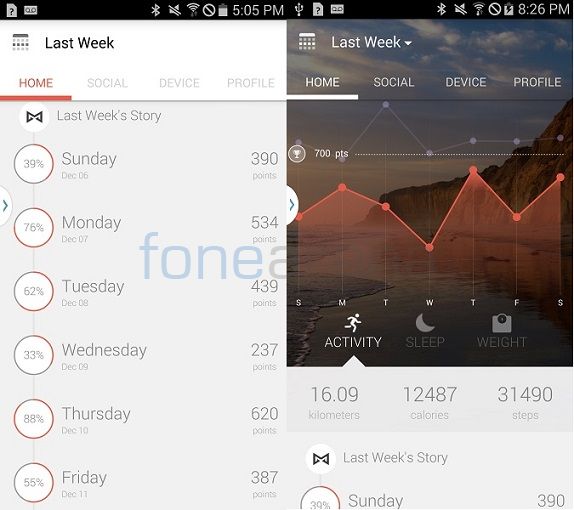 You can also take a look at a weekly overview of your activity, which also compares your achievements to the previous weeks. However, I think the app lacks to offer in depth data of the activities and it would have been nice if it could collect more data. In case of the calories burned, the count is always on the higher side but again it says that you burn calories even when you don’t workout. It would have been better if the calorie count was simple meaning, display of the calories burnt directly after a workout.  Also, the device does not let you track your food intake and calories which is present on Jawbone and Fitbit . However, the app does offer the ability to connect with other apps and services including MyFitnessPal, for example, and you can enter your weight each day to keep track of your weight loss progress. 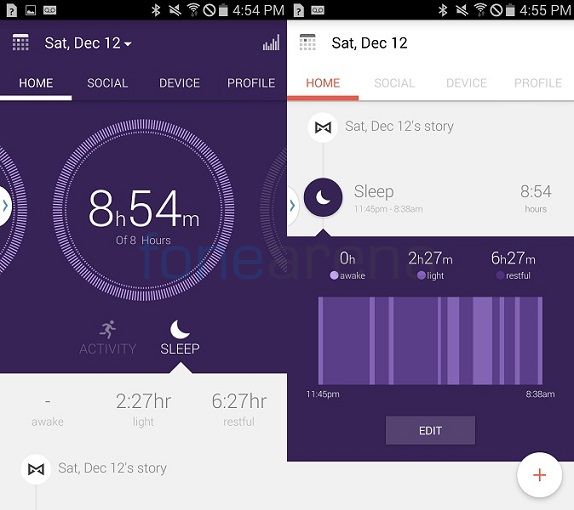 The automatic sleep tracking on the Shine is good and it almost understands when you go to sleep. The app shows how long you slept but does not offer in-depth information like deep sleep and sleep patterns, a feature which is present on even entry-level trackers like Mi Band. Shines app offers stats in three parts – awake, light and restful. The sleep tracking is not that accurate, but again you can manually edit it. Most days, the device showed excess sleep time when that was not the case. 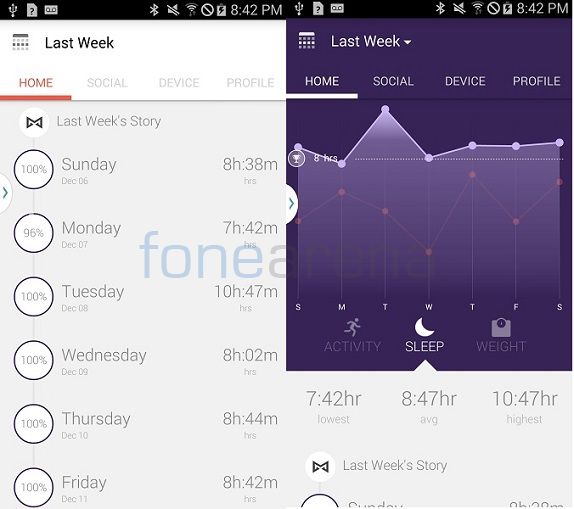 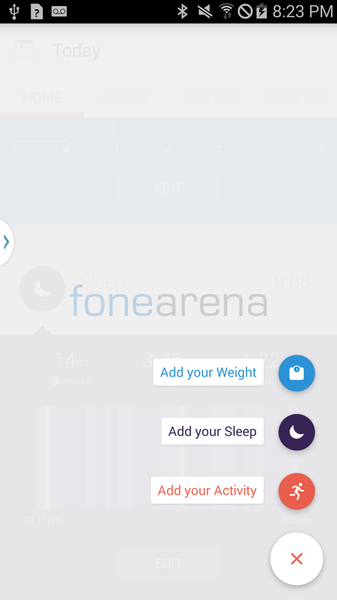 Tapping the ‘+’ button on the app which is present at the lower right corner brings out three floating action buttons that lets you add your weight, sleep and activity. In the app, you can designate an “activity” mode that alerts the Shine to a certain activity. You can choose between sleep, swim, or cycle, and activate the mode by tapping three times on the Shine’s face. One of the best features of the Misift Shine is that it is waterproof upto 50m which means you can use it for swimming and even take it in the shower. It can even sustain your workout sweat. 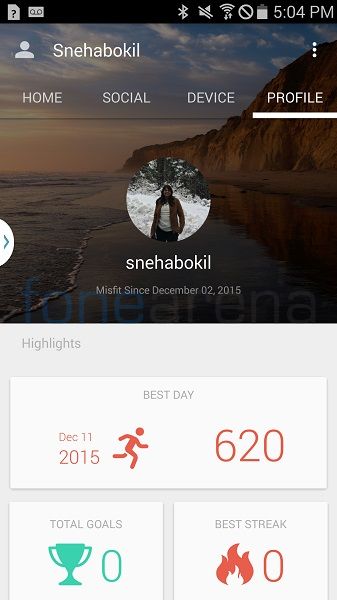 There is a social side to the app as well that lets you sync up with friends who are also using the tracker and compete with them for the top spot on your fitness leaderboard.

As mentioned earlier, the battery in Shine is a coin cell battery that Misfit claims lasts up to six months. You can easily replace the battery once it is dead.

Misfit Shine is definitely a stylish fitness activity tracker present out there and the fact that you can carry that tracker in more than one ways easily in your day-to-day routine does give it an edge over other fitness trackers. But, again the Shine itself is small and has a strong magnet at the back so you will have to more careful especially around metal objects. Next up, being water proof also earns Shine few points as it is one of the important feature one looks in a fitness tracker. However, when it comes to fitness tracking, the Shine does have its drawbacks as it offers only the basics of the activity tracking and does not dig deep. In addition, the Android app does not do a good job of displaying the daily stats in a simple way. We really wished that the UI could get a revamp so it would be easier to keep a track record of your health and fitness activities in the long run.

Another common feature absent in the Shine is the lack of support for call notifications and vibration. This means that the device does not alert you if you have been inactive for long hours during the day. Coming back to the good aspect of the Shine is that the device is water proof and that definitely makes it desirable especially for swimmers. Hence, this feature has the capability to act as a deal breaker while choosing a fitness tracker.

At the end, if you are looking for basic fitness tracking and sleep monitoring, the Misfit Shine will do the job for you. This device is ideal for casual users who mainly go for regular activities like walking and jogging. The Misfit Shine was launched in India exclusively on Snapdeal for Rs 5,499 but the device was not available on the site at the time of writing this article. It is currently, available in India on Amazon.in for Rs 5,596.