Google announced Android M in May this year at the I/O conference. There has been a number of guesses and speculation about what will Google name its latest Android OS. Now, the company has released a new video that hints at possible names for Android M. 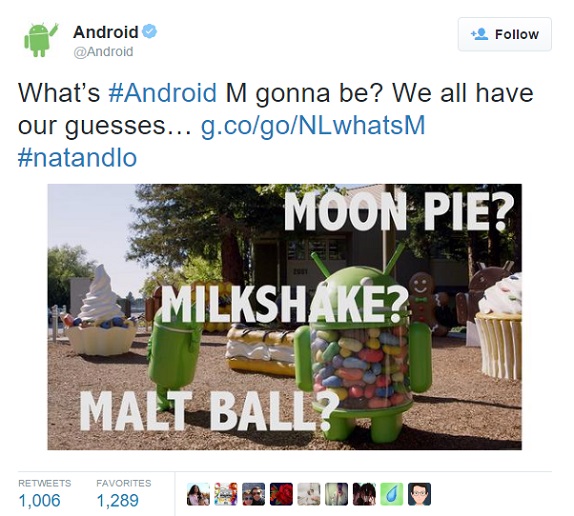 Last year, Android L became Lollipop while this year there are many suggestions that includes marshmallow, milkshake, macaroon, meringue, mango lassi and so on, however the actual name of the latest M release remains to be seen. The video has been released by Natalie and Lorraine who are Google employees.As usual Google enjoys creating speculation and buzz prior to the release of its new Android operating system and it is continuing the trend this year as well.

Just to give a quick recall Google has used names like Cupcake, Donut, Eclair, Froyo, Gingerbread, Honeycomb, Ice Cream Sandwich, Jelly Bean, KitKat and Lollipop until now for its Android OS over the years. The new Android M brings with it a number of new features, including improved battery life, better app permission management, native support for USB Type-C and fingerprint authentication, Android Pay, and also improved Google Now. The video says Android M is “about to drop” and “almost here” so we won’t have to wait long before we find know it. Although, it is speculated that Android M will be Marshmallow, my guess is Macroon. What’s yours?