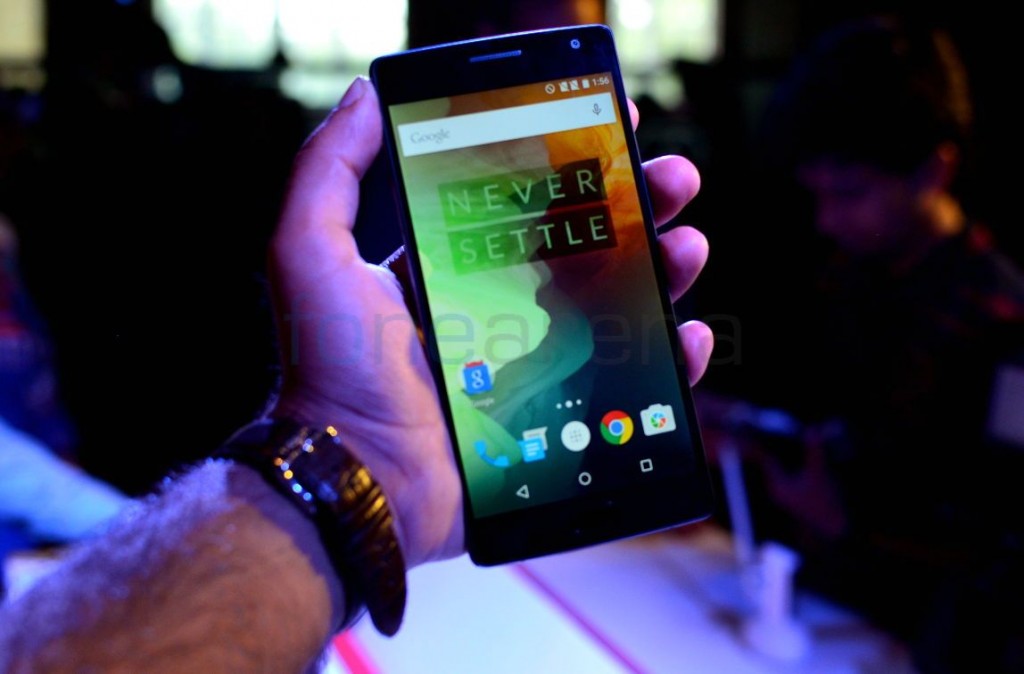 A device that practically redefined what to expect from a handset priced at par with any mid-range smartphone. The OnePlus introduced to us and to an extent made us believe in their philosophy to ‘never settle’. So when the company announced that it is about to introduce a follow up, the expectations were sky high. Like the original, the company opted to reveal the handset piece meal instead of a big bang launch in one go. This meant that when we went hands on with the device, there was no element of surprise with the focus lying more on experiencing the product than just the admittedly competent hardware specifications. 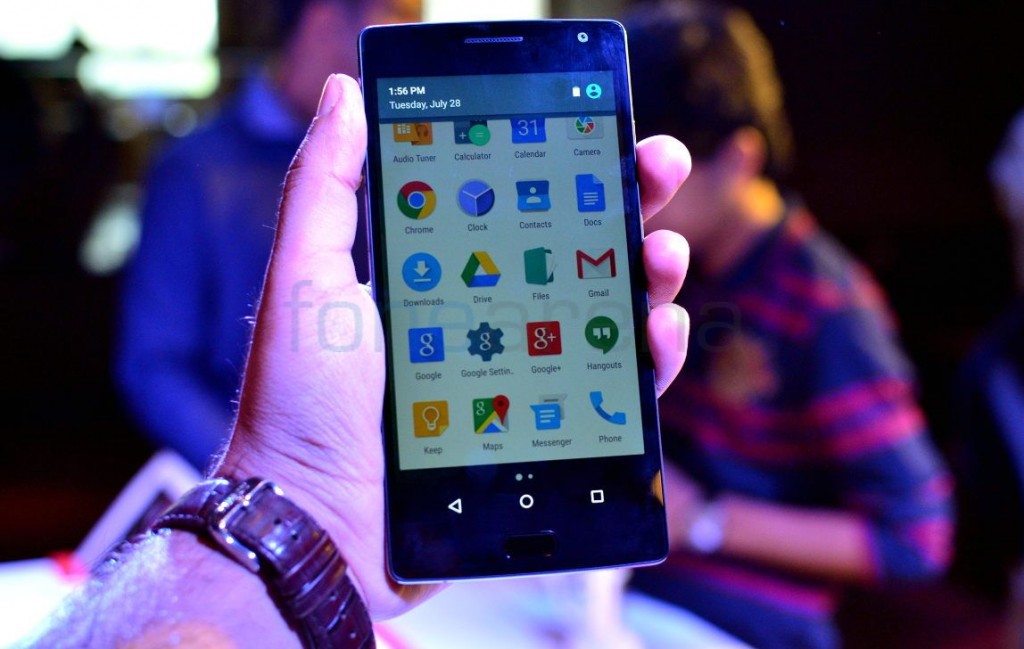 Design wise, the phone brings some rather polarizing changes. Gone is what was a very distinctive and perhaps even beautiful design and has been replaced by a somewhat cookie cutter design language. The curved edges of the predecessor have been replaced by straigher edges. The phone itself is slightly larger than the original and measures 151.8 x 74.99 x 9.9mm.The thickness is of course due to changes in the camera module that we’ll talk about shortly. The front of the phone continues to have a 5.5″ IPS panel which appears to be nice and bright. Viewing angles seem to be above average but there’s only that much you can test out in a press conference environment.

Some very interesting hardware changes form the more tangible upgrades to the handset. Right off the bat you’ll spot a three way rocker switch towards the left side of the device. Unlike the iPhone which packs a mute switch, the three way rocker switch here will let you toggle notifications. You can allow all notifications to pass through, only those from VIP contacts or block them all together for those times when you just don’t want any distractions. While its certainly a very nice feature to have, we’d prefer the ability to chose what to do with the switch. Personally, i wouldn’t mind using the switch as a mute toggle. Over on the right hand side is the volume rocker and power button both of which offer great tactile feedback. 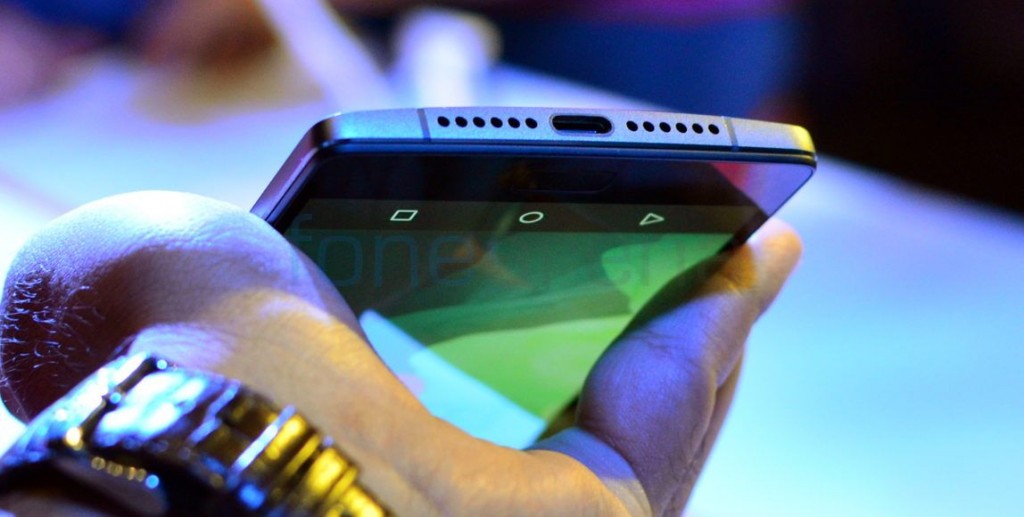 Never one to falter behind the latest trends, the OnePlus 2 supports the latest USB Type C connector. With the fast adoption that we’re seeing, the Type C connector is fast expected to become the next standard. The USB Type C connector on the OnePlus 2 allows you to plug in your charging/data transfer cable in any orientation so you won’t be left fumbling in the dark anymore. What is cool is that bundled cable is also reversible on the USB Type A side which is very innovative indeed. Flanking the USB connector are speaker holes that look quite a bit like those on the iPhone. 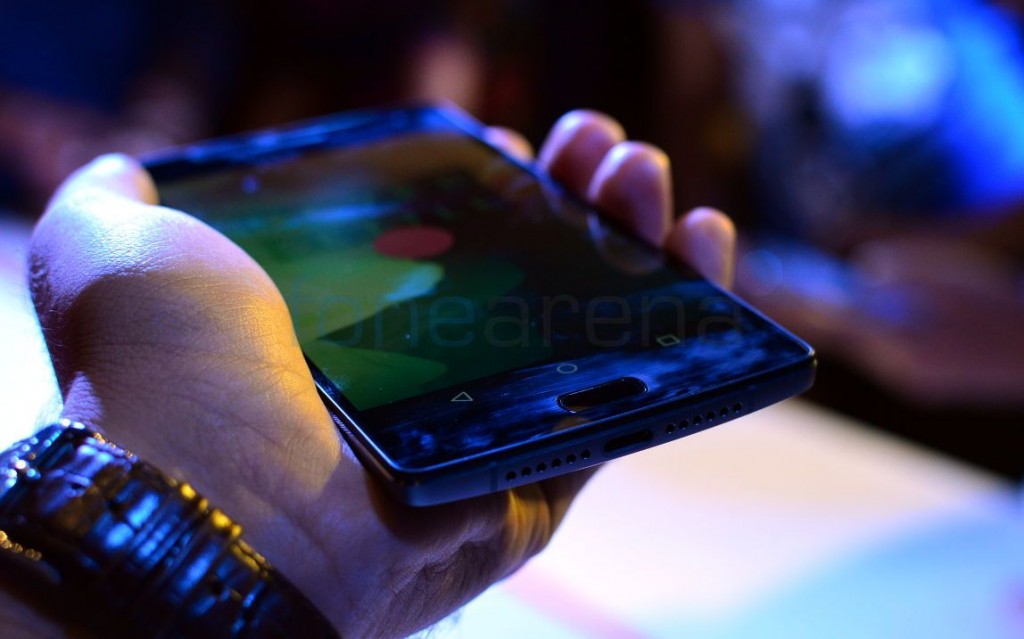 A fresh addition to the hardware is the presence of a fingerprint scanner. Our initial experience with the fingerprint scanner proved to be quite satisfactory. Long pressing on the button delivers haptic feedback and leads you into the main menu of the handset. Flanking the scanner are two capacitive buttons. It is however possible to switch over from the capacitive buttons to onscreen controls if that’s what you prefer. By now you’d also have noticed that gone are the swathes of plastic that decked the original OnePlus One. The OnePlus 2 opts for a metal build and has a magnesium alloy chassis that feels a lot more premium. Predictably it also weighs more at 175 grams but not enough to be a major concern. We found the handset quite reassuring and comfortable to hold and don’t think the higher weight will really bother anyone at all. 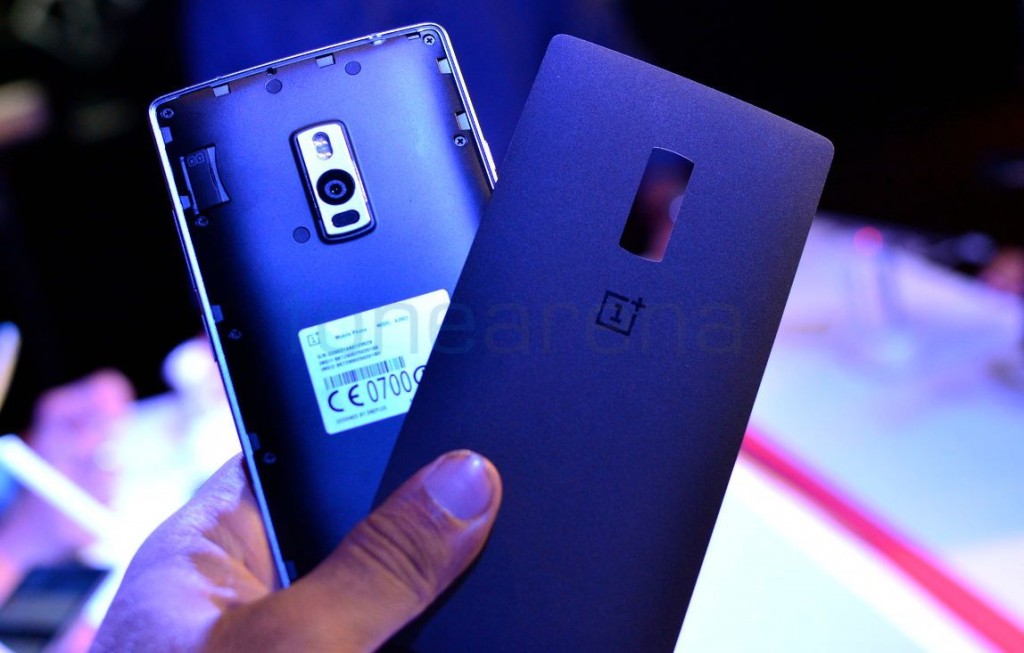 The back of the phone continues to sport the sandstone black finish that debuted with the original and it feels better than ever here. The phone definitely won’t slip out from your hands and the matte texture gives the handset a high end appeal. Remove the back cover and you get access to the SIM card slots. Unlike the first generation device, the OnePlus 2 is a dual SIM phone and packs two SIM cards on a single tray that slots into the phone. 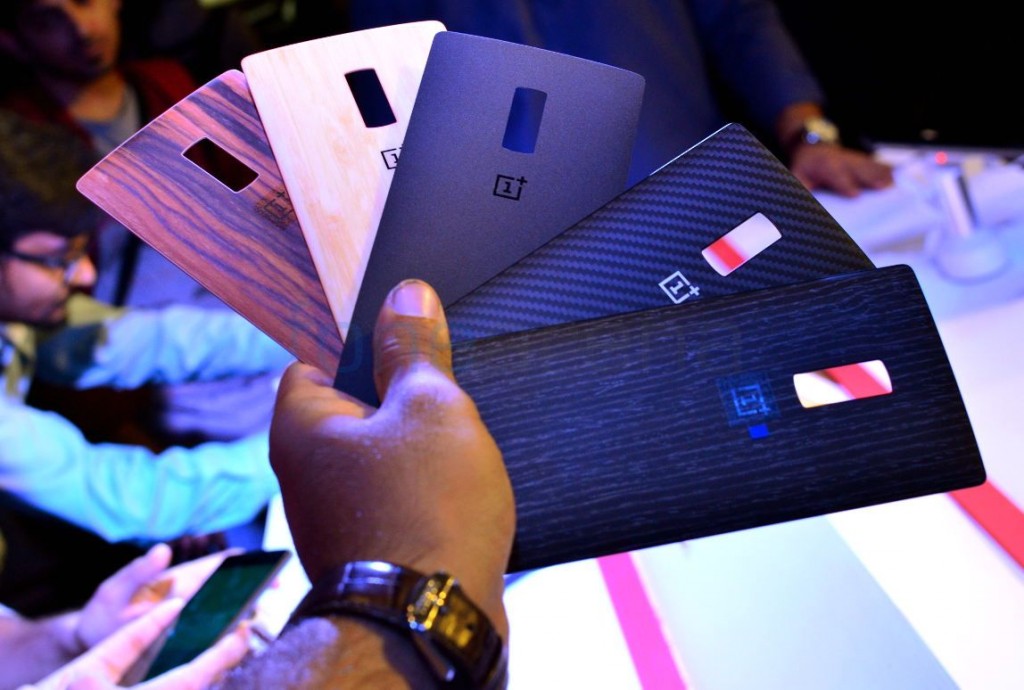 The back cover has been made easier still to remove and you can swap it out with the variety of wood and carbon fibre texture covers on offer. We’re sure a vibrant third party ecosystem of back panels will sprout up soon after launch. There are contact points built into the back covers and swapping them out will alter some accent colors in the themes. A small but nice touch to have. 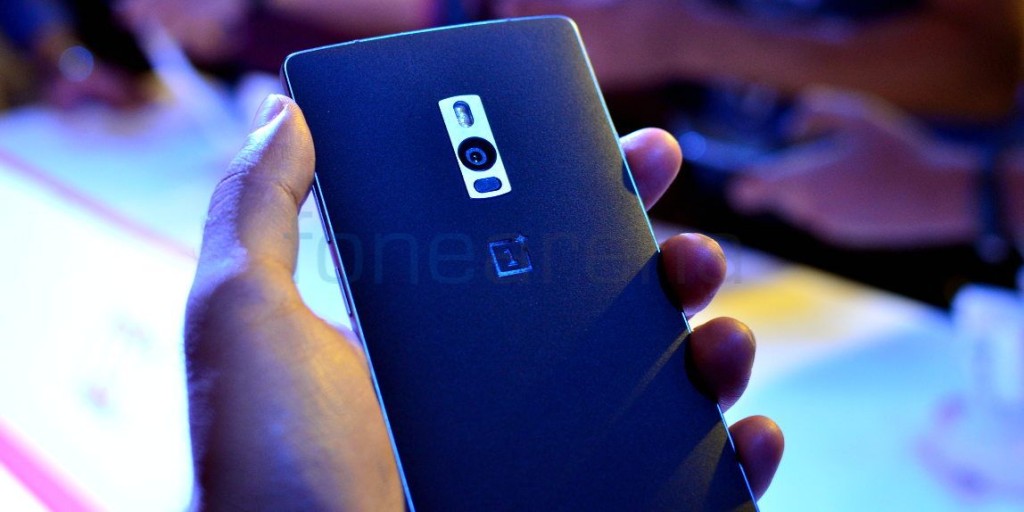 By now you’d have noticed that the camera module sits lower than the rest of the body of the handset. This can be attributed to multiple reasons. The principle is of course that the camera is now equipped with optical image stabilization. The module is thicker and requires more space to be accommodated within the body. The phone also has a laser assisted focussing system similar to the likes of the one found in LG’s flagship devices. In our testing we found it to be quite fast, not as fast as the phase detection autofocus found in the Galaxy S6 and some other phones but much faster than most of its Android running brethren. The camera is something that we’ll have to put through its paces before delivering a verdict. To avoid a bulge where the camera lies, OnePlus opted to seat the camera a bit lower in the body and to increase the thickness ever so slightly. This also allowed them to squeeze in a slightly larger 3300 mAh battery. 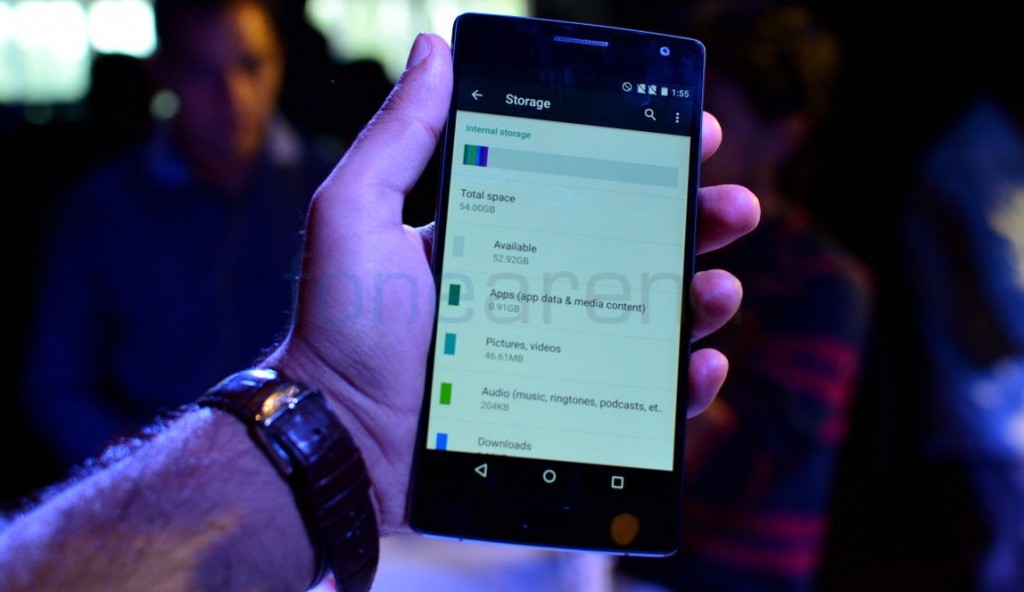 The phone of course runs Android Lollipop, more specifically Oxygen OS 2.0 which is based on Android Lollipop. Other than a few additions, this is practically stock Android through and through running on surprisingly high end specifications given the price point. This was a given considering OnePlus has always aimed to deliver flagship grade specs at a mid range price point. This time around you get a Snapdragon 810 processor paired with 3GB or 4GB or RAM depending on the SKU. To quell any worries about overheating, OnePlus has reiterated that it has opted for v2.1 of the chipset and has applied a liberal coating of thermal paste, graphite around the CPU which will prevent overheating. The claim is something we aim to test in our full review. Storage options will remain 16 and 64GB with the former getting 3GB of DDR4 RAM and the latter being equipped with 4GB of DDR4 RAM. Suffice to say, you won’t be left hanging while attempting heavy multitasking. 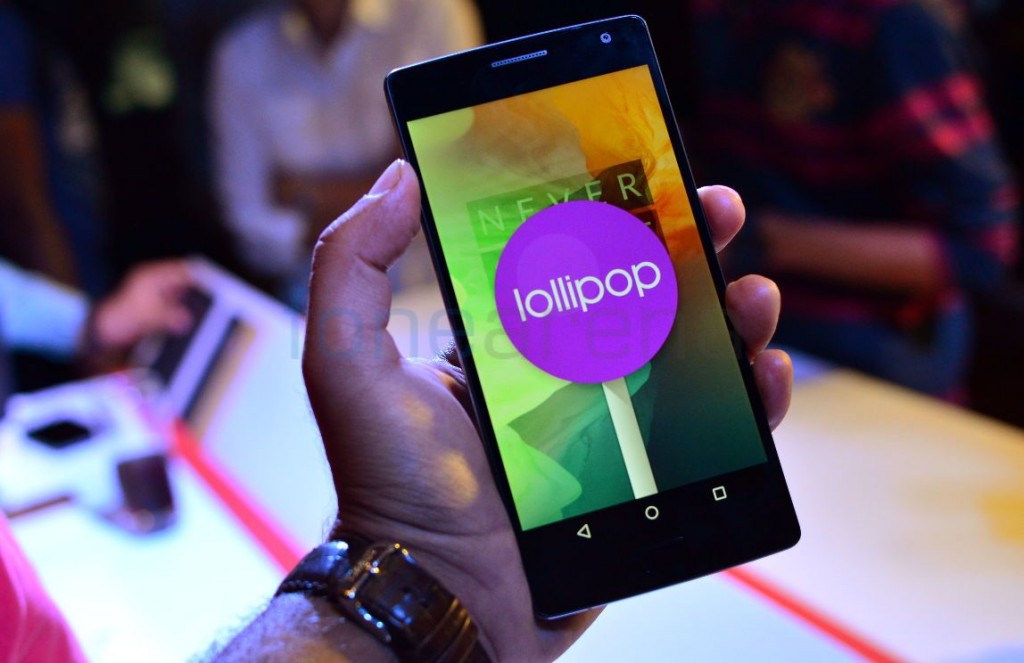 The only way to describe the OnePlus 2 given the amount of time we had with it would be to call it different. This isn’t the same sprightly beast that took the world by storm just an year ago. There are refinements all around, there is no hint of reckless risk taking here. Every component serves a purpose and this carries forward into the design. Opting for comfort over breaking design boundaries is something that users will appreciate over time. Priced at Rs. 24,999 for the 64GB SKU, there’s precious little that the OnePlus 2 doesn’t offer. That said, the competition has matured and customer expectations are at an all time high. It remains to be seen if OnePlus will be able to recreate the mad rush for invites that was started by the predecessor. Oh yes, you still need to queue up to buy one.