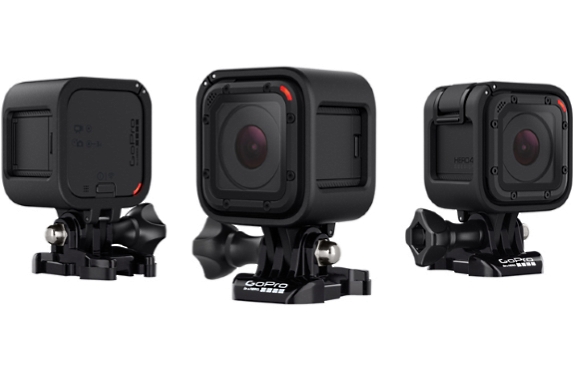 GoPro Inc. has launched its smallest and lightest GoPro yet – the GoPro Hero4 Session. It is 50 percent smaller and 40 percent lighter than company’s best-selling Hero4 Black and Silver cameras.

“With Hero4 Session, we challenged ourselves to produce the smallest, lightest, most convenient GoPro possible,” said Nicholas Woodman, GoPro founder and CEO. “Hero4 Session combines the best of our engineering and user-experience know-how to deliver our most convenient life-capture solution, yet.”

GoPro Hero4 Session boasts of same built and rugged standards as the GoPro. It is waterproof upto 33 feet (10 meters). Its new waterproof design eliminates the need for a separate waterhousing and enhances audio performance during water-based activities.

The Hero4 Session features a sleek frame mounting system that is compatible with all existing GoPro mounts. Its dual microphone system can dynamically switch sound recording between microphones to reduce wind noise during activities, claims company.

It can capture GoPro-quality 1080p/60fps, 720p/100fps and 1440p/30fps video along with 8-megapixel photos in Single, Burst and Time Lapse modes. It also features some modes like SuperView, Protune and Auto Low Light recording mode taken from Hero4 Black and Silver cameras. Users can access more controls and settings from companion GoPro App or Smart Remote app.

GoPro Hero4 Session will retail for $399.99 (MSRP) at authorized GoPro retailers around the world and on GoPro.com beginning July 12.