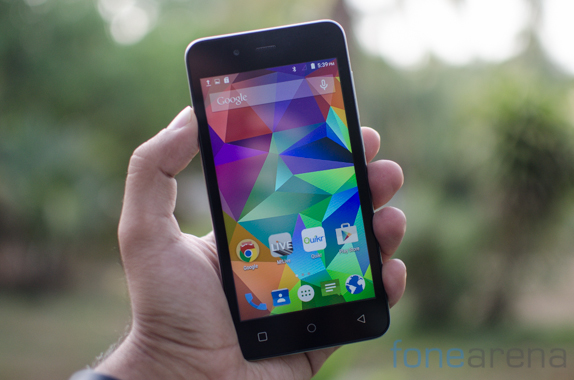 Consumers have never had it better. With the rapid commoditization of technology come better devices at price points that have never been lower. This trend started with the likes of Xiaomi and Motorola bringing cheaper devices with performance that was good enough for a lot of buyers out there and has been quickly aped by the Indian players in the smartphone field. A sub 5,000 rupee handset running Android Lollipop and with a focus on build quality has mostly been a pipe dream but the Micromax Canvas Spark promises just that. Does it deliver? We find out in our review.

Design
The Micromax Canvas Spark impresses when it comes to build quality and design. It punches well above its weight and certainly doesn’t come off as the low-end budget hardware that it is. 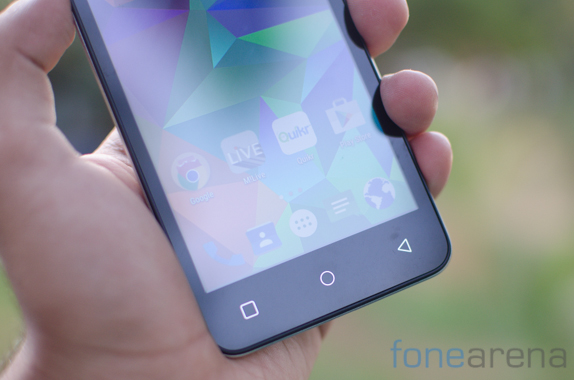 The front has a design reminiscent of the iPhone 3GS but to call it a copy would be unfair. The screen is a 4.7 inch panel with a front facing camera and speaker grille placed above it. Below the display lie three capacitive buttons corresponding to the standard Android 5.0 icons. 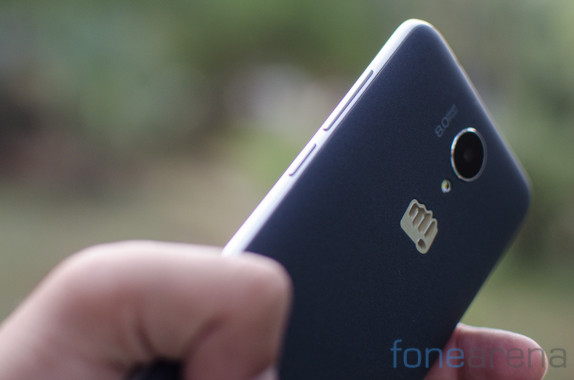 Where you start noticing the attention to design is however towards the sides of the handset. A metallic grey band runs around the device in our black/grey variant. There is also a white/gold combination on offer. The grey band is predictably plastic as you’d expect from a handset in this category but feels and looks quite good. How well it lasts over extended usage however is a different story. We can see this picking up dings and scratches over time though that is true for most plastic handsets anyway. The right side sports the volume rocker and the power button while the left is bereft of any key. We liked the slightly rigid nature of the buttons which means that they require a bit of effort to press down. We vastly prefer these to buttons that are soft/mushy and activate a bit too easily. The top of the phone has the 3.5mm audio jack while the bottom is where you’ll spot the microUSB port as well as the microphone port. 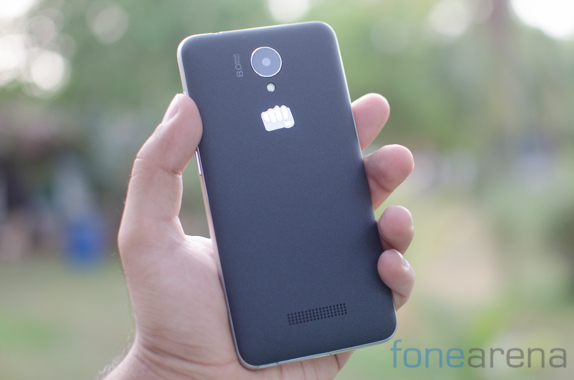 The rear panel of the phone has a sandstone like color and finish as pioneered by the OnePlus One. The implementation is a lot smoother though. The speaker grille is placed towards the bottom while a Micromax logo is placed below the camera module. Speaking of the camera module, it is accompanied by a single LED flash. The module itself protrudes out from the body of the handset which makes us fear that it will pick up scratches whenever you place it on a surface. 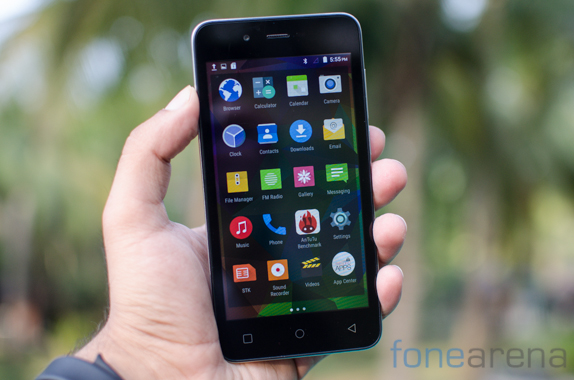 The handset measures in at a svelte 8.5mm which makes it very comfortable to hold and it slips into most pockets with ease. The weight has also been kept low at 134 grams which means that the phone will never weigh down in your hand or pocket. The Micromax Canvas Spark suitably impressed us in the design and build department. It has been the rare handset that manages to deliver in these categories and the Canvas Spark ticks all the right boxes for sure. However, design alone doesn’t make a good handset. Let’s see how the Canvas Spark delivers in the software and performance departments.

Software
In a move that is most definitely good for consumers, Micromax has kept skinning to an absolute minimum. The experience is essentially stock Android 5.0 Lollipop and it certainly helps with performance. 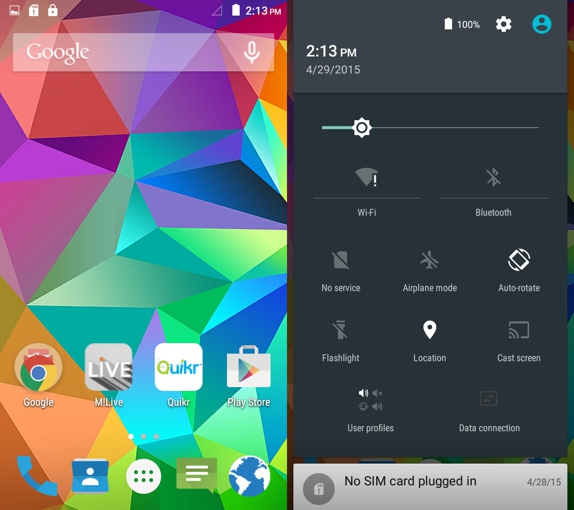 Unfortunately, the handset has a whole host of applications pre-installed. Some useful, others not so much, they eat into the already limited storage space on offer as it is not possible to uninstall them. 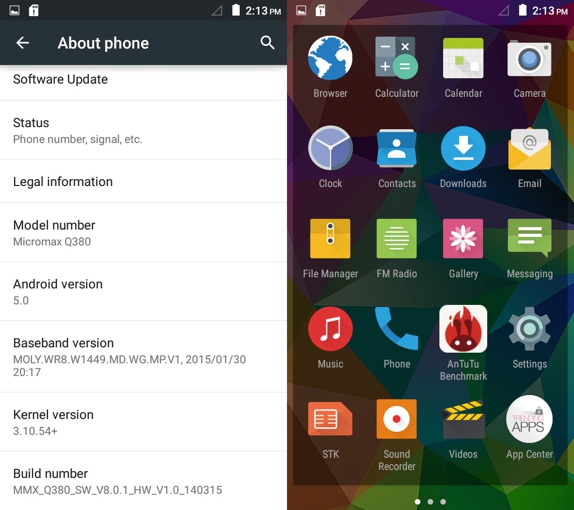 The range of applications included in the software include an apps center, a games center and a few apps for services like Quikr. As we said earlier, you might find utility for a few of these services but for the most part they are just unnecessary baggage. Beyond that, the software experience is nice and clean just as we like it. There are no useless modifications to the core software nor are there UI tweaks just for the heck of it.

We mentioned commoditization of hardware early on in the review and that’s exactly what you see in the hardware of the Canvas Spark. Hardware that was well-considered mid range or even high-end a while back is now the mainstay of budget devices. The Micromax Canvas Spark is equipped with a 1.3Ghz quad core Mediatek MT6582M processor and is paired with 1GB of RAM of which about 497MB is available at boot. The amount of free RAM generally hovers around the 360MB mark after a couple of hours of usage. Not high-end specifications but certainly impressive for a low-cost handset. That said, performance was unfortunately a bit of a hit or miss. The phone would occasionally take a few seconds to react to a button press and app launching always felt a bit slow. It was as if the phone was still processing the touch while we were waiting for it to start up the app. We feel that further optimization and a software update has the potential to fix this. In terms of benchmarks, performance is what you’d expect and falls right in line with the competition. We’ve included a couple of benchmarks below for your perusal. 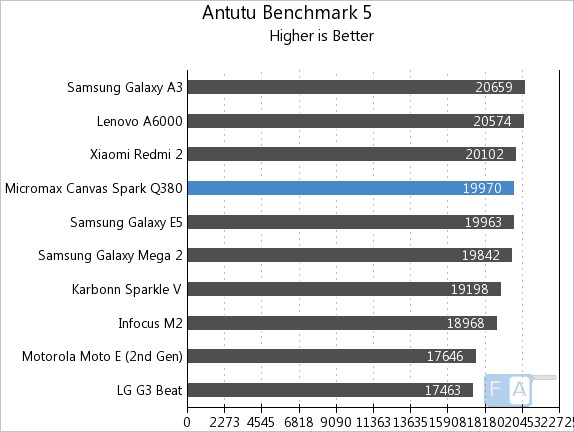 The AnTuTu is an all-encompassing benchmark and the Canvas Spark scored 19970 points here. This places it right below the higher priced Lenovo A6000 and Xiaomi Redmi 2 while it handily beats the likes of the 2nd generation Moto E. 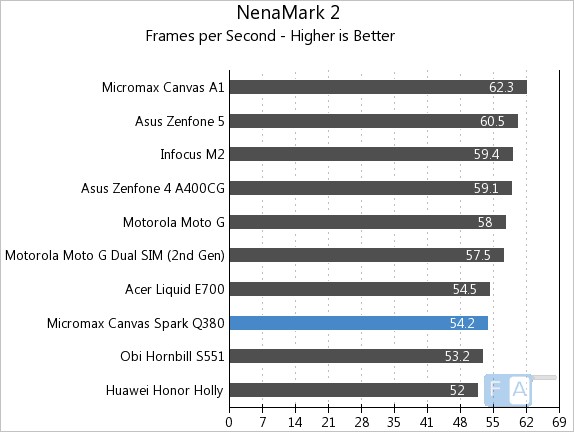 Nenamark 2 is a GPU centric benchmark. Here the phone scored 54.2 FPS which shows that the phone isn’t the most powerful when it comes to GPU rendering. 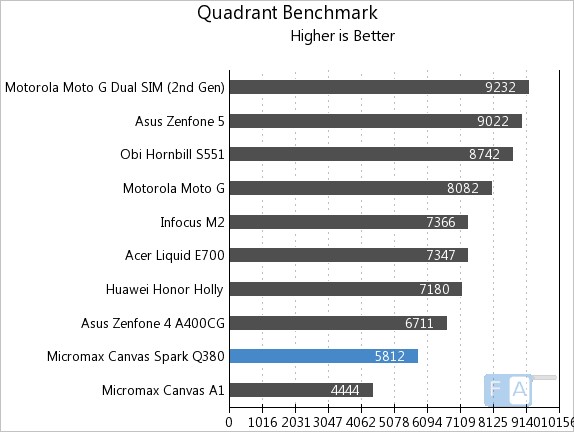 The Quadrant benchmark is where the Canvas Spark really lags. With a score of just 5812, most other handsets in the category handily outpaced it. Benchmarks are only part of the performance story of a handset but all said and done, the Canvas Spark is just about alright when it comes to usability. There are pronounced lags throughout the interface and the occasional slowdowns can certainly become irksome.

There’s an 8MP camera module on the Canvas Spark and image quality isn’t all that bad. Shots in well-lit conditions are usually usable. The camera isn’t all that bad with dynamic range being the limiting factor like most budget handsets. 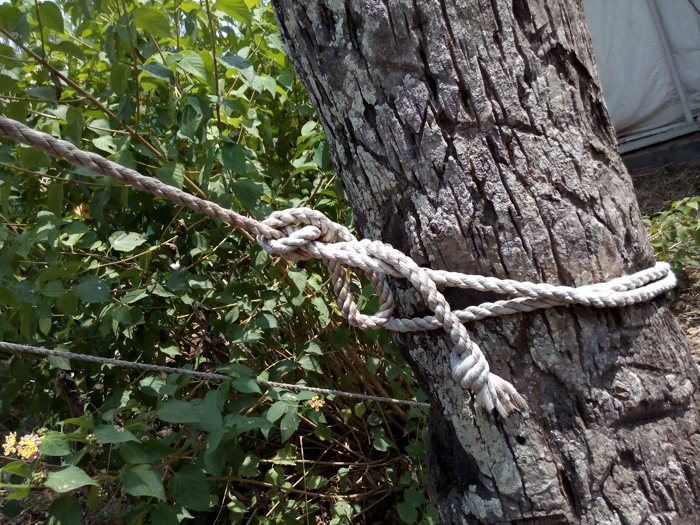 In this well-lit shot, the level of detail is surprisingly good with almost no noise at all but that’s to be expected. The whites in the rope have been slightly overexposed which demonstrates the limited dynamic range. This is even more visible in the first show below where the trees are way too dark. Still, in most well-lit situations you should be able to get a shot that won’t utterly disappoint you. 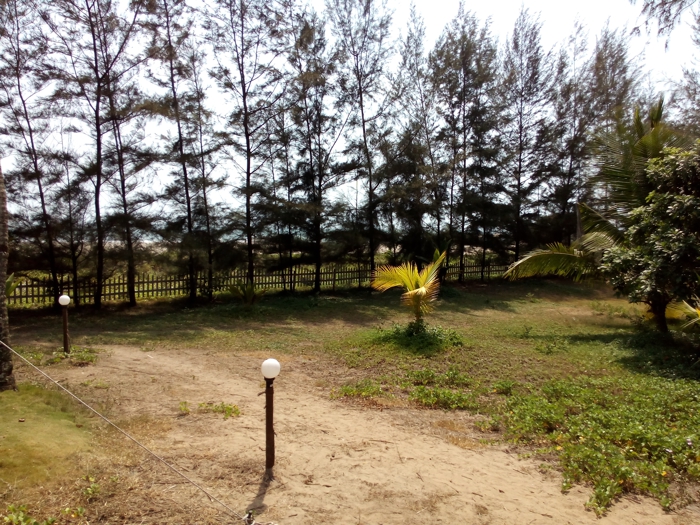 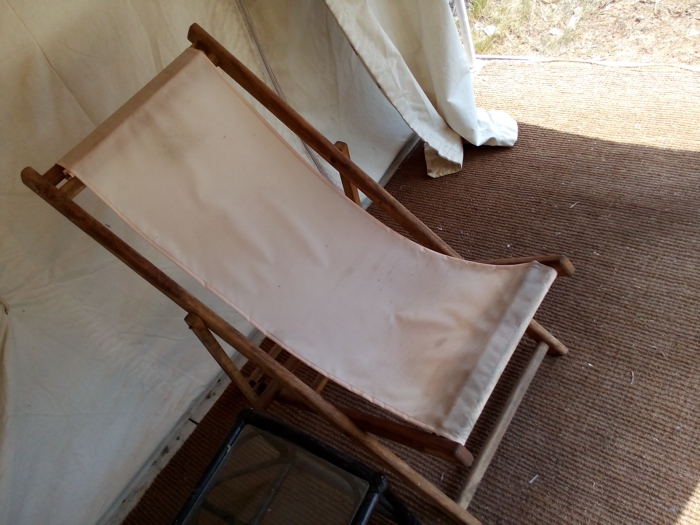 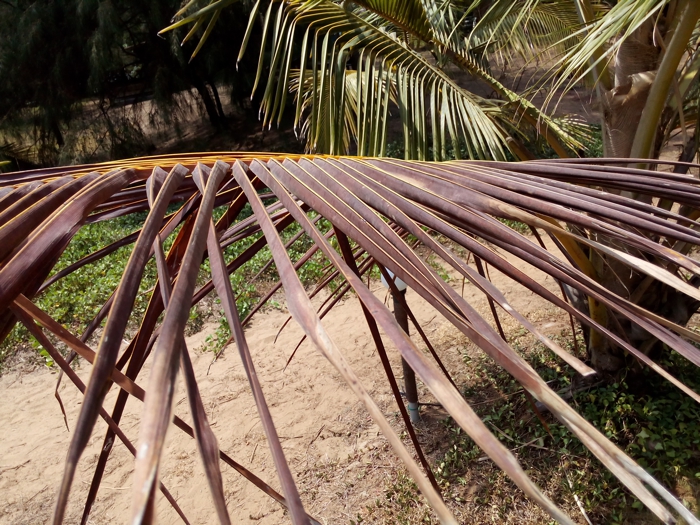 In the middle shot where the lighting is still good we noticed a rise in the level of noise but still not enough to really complain. Don’t bother with low light shots at all as those are unusable. The images come out too dark with too much noise and you really won’t be using them for anything at all. The front facing camera isn’t much good either as  images are generally a bit blurred out. Low light video calling from the front camera is also out of the question. The video capabilities of the Canvas Spark are quite bad. The phone tops off at 720p recording and there too, the quality is honestly quite bad. There’s a high level of compression artifacts in the video and the colors are generally off as well. We’ve found that low-end handsets are generally quite bad at video capture and that’s really something that manufacturers ought to start working on. Long story short, the Canvas Spark isn’t bad for the occasional shot and you’ll be fine as long as you’re shooting outdoors on a sunny day but you’d be well advised to keep your expectations in check.

Admittedly, a qHD (960×540) display isn’t something worth writing home about but that’s what you get with most budget devices. The specific panel in use on the Canvas Spark isn’t all that bad. The low resolution stretched out over 4.7 inches does give text and icons a slight blur around the edges but it is certainly not unusable. We found color rendering to be fairly accurate and brightness levels are quite good. 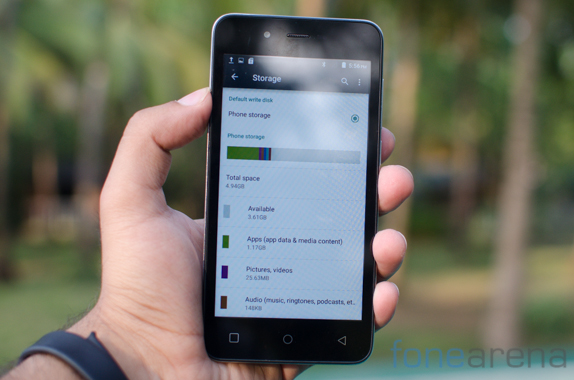 Tested out in bright sunlight, the glossy panel does make it a bit hard to read text but bumping up the brightness levels helps mitigate that to a degree. A slightly higher maximum brightness level would have been appreciated. Beyond that, saturation levels are adequate and viewing angles are good enough. The display isn’t going to make the handset standout but it feels perfectly adequate for a budget device like the Canvas Spark. On the plus side, the display has a Gorilla Glass 3 coating which isn’t something commonly seen in this category.

Connectivity options on the Micromax Canvas Spark are bog standard. You get the usual 3G HSPA+, WiFi 802.11 b/g/n, Bluetooth 4.0 and GPS. The phone has Dual SIM support with 3G support on slot 1 and the second slot being relegated to 2G speeds. This is common for entry-level devices and not something we can really complain about. Of the 8GB of storage, there is about 3.6GB of free space available. You can bump that up via the microSD card slot. We tried out a 64GB card in the handset and it worked just fine despite the company’s claim of supporting up to 32GB of extra storage. The phone supports USB OTG as well and you can easily swap the default write disk between phone storage, SD card and the external USB storage. 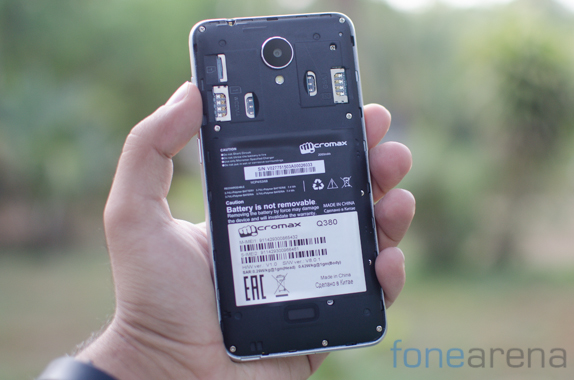 The battery is a sealed in 2,000 mAh unit. With mild usage, the handset delivered about a day of usage but start putting it through its paces and battery life takes a solid hit. You’ll want to keep a battery pack handy with this one as usage of the camera, music player in particular do push down battery life rather drastically. Without a doubt, you’ll have to charge the Micromax Canvas Spark every night.

The Micromax Canvas Spark delivers what it promises. This is possibly some of the best hardware we’ve got our hands on in this price range. A sub 5,000 rupee handset that feels like something in Rs. 10,000 price segment is not something we see everyday and for this Micromax deserves a lot of credit. However compromises have to be made to achieve this and it’s very evident where that happened. 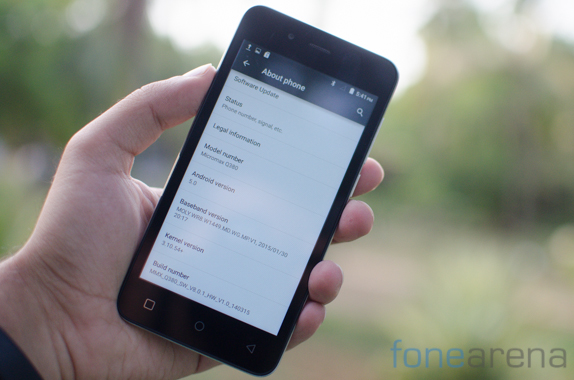 Performance on the Canvas Spark is far from the best. If your usage requirements are minimal then you’ll probably get along with the slow-ish response and the sluggish performance. The anaemic response from the handset will always leave you feeling as if the handset is playing catch up but it is possible to get used to it. What’s slightly harder to get used to is the battery life which frankly sucks.The camera isn’t all that bad though. All in all, the Canvas Spark is far from the worst handset we’ve seen in the budget category and compared to the competition it’s not bad value either. As long as you’re aware of the limitations and there are quite a few, you should be fairly satisfied with the hardware on offer. If you can step up though, devices like the Moto E, Xiaomi Redmi 2 deliver better performance and similar build for not a lot more money.