User manual of the Motorola Droid Turbo has surfaced in a new leak. The phone whose specs were leaked last month have now been detailed in the user guide. 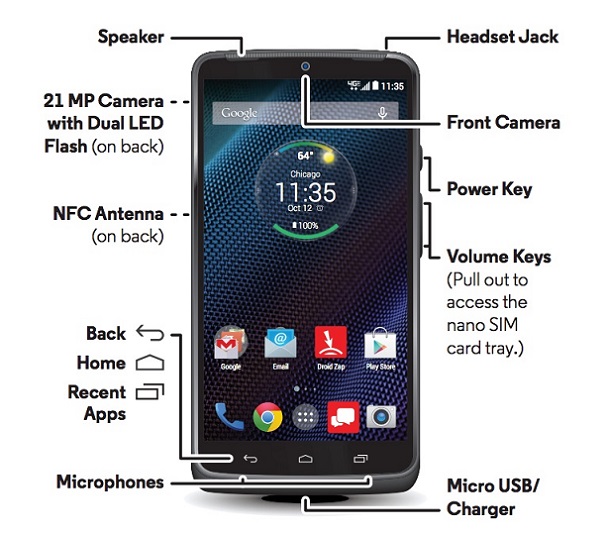 The document looks like a legit Verizon user guide, offering information on how to set up and use the phone’s various features. Motorola Droid Turbo will have a 5.2-inch ‘ultra-high definition’ display, a 21 MP rear camera with dual LED flash and a front camera. The phone will support 4G LTE connectivity and it will also come with all of Motorola’s convenient software additions like Moto Assist, Moto Actions, and Moto Voice.

The Droid Turbo also includes wireless charging capabilities with any Qi accessory and is compatible with Motorola’s new Turbo Charger, as well. As per the user guide, users will need to pull out the volume keys to add the nano SIM card in the tray. It has three on capacitive buttons on the screen and microphone at the bottom along with a micro USB port. While there is a microphone at the top in addition to the audio jack. NFC antenna is also situated at the back.

Previous rumors had suggested that Motorola and Verizon could introduce the DROID Turbo sometime this month but no official word regarding the price and availability is known yet. Droid Turbo was leaked in photos last month that showed the phone had a similar design to the new Moto X. You can read the full 73 page manual here.