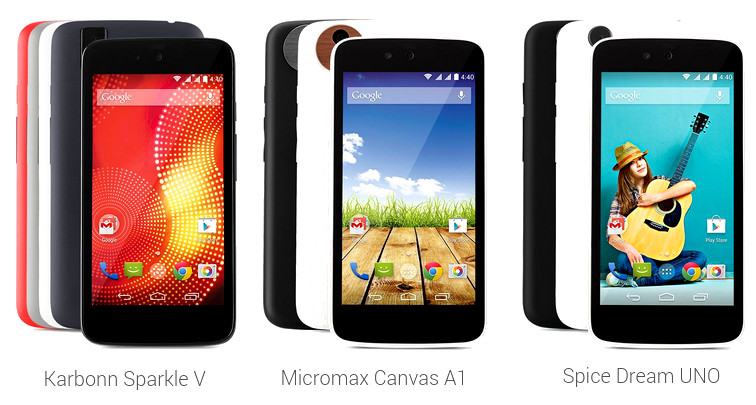 Google today launched the Android One India with three smartphones from three different manufacturers. These include, Micromax Canvas A1, Karbonn Sparkle V and Spice Dream UNO. These are priced starting from Rs. 6,299 and are based on Android One reference hardware, comes with stock Android KitKat software and will get software updates directly from Google. It has promised to provide updates for the smartphones for up to two years and also confirmed that these are some of the first phones to get the new Android L update. All these smartphones have different designs, even though the internals are similar.

If we look at how people are getting online and accessing information today, increasingly it’s through a smartphone. While 1.75 billion people around the world already have a smartphone, the vast majority of the world’s population—over five billion more—do not. By working closely with phone and silicon chip makers to share reference designs and select components, we’re making it easier for our partners to build phones that are not just great to use, but also affordable. With Android One, we not only want to help people get online, we want to make sure that when they get there, they can tap into the wealth of information and knowledge the web holds for everyone.

The Karbonn Sparkle V will go on sale on Snapdeal, Micromax Canvas A1 on Amazon and Spice Dream UNO on Flipkart at 3:30PM. These smartphones would be available for purchase from retail stores across India from early October. Google plans to expand Android One to more countries such as Indonesia, the Philippines, and additional countries in South Asia by the end of the year.